How a Centuries-Old Soldier Ration Found a Fanbase in Alaska - Gastro Obscura
Want to see fewer ads? Become a Member. 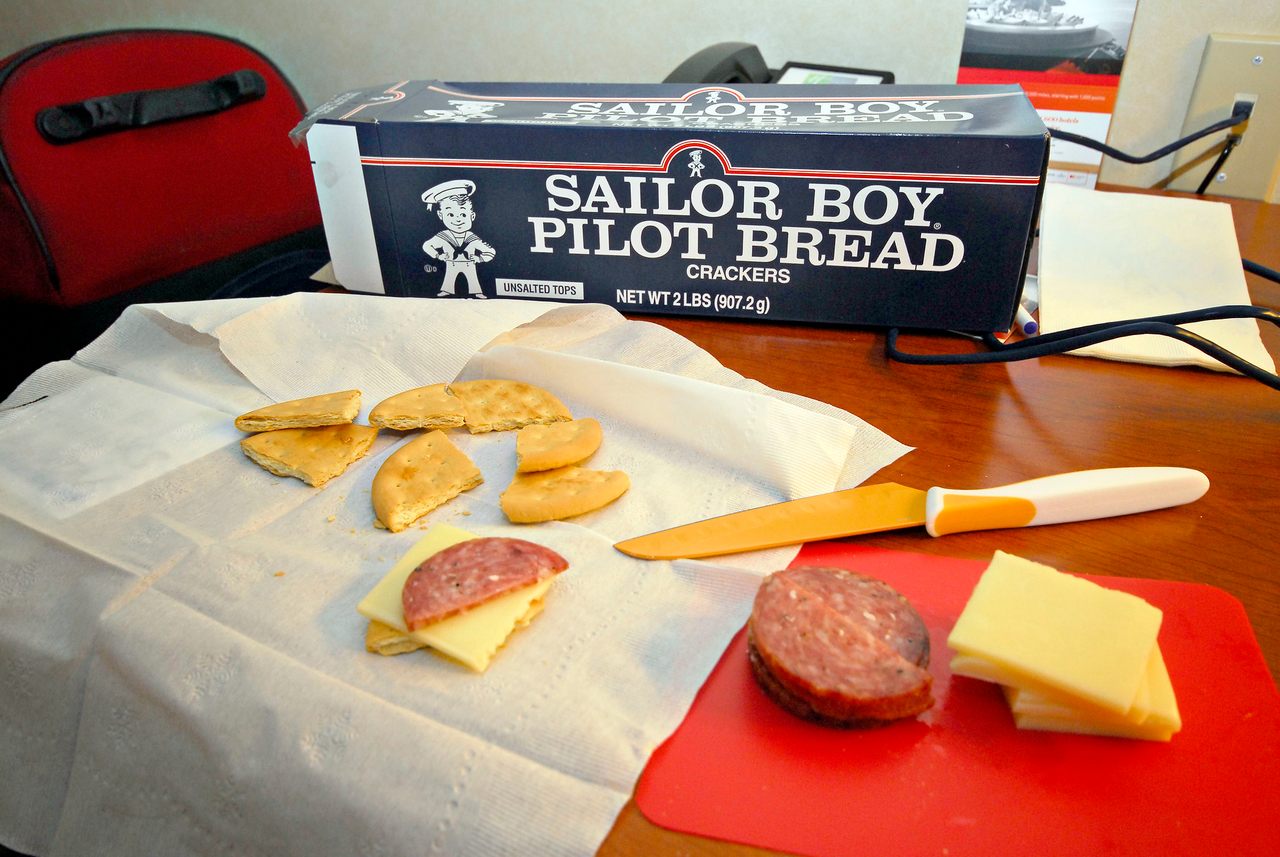 When it comes to hardtack, most people today only know the jokes about it. In the American Civil War, soldiers sang songs about the notoriously indestructible biscuit: “’Tis the song, the sigh of the hungry/Hardtack, hardtack, come again no more/Many days you have lingered upon our stomachs sore/O, hardtack, come again no more!” Portable and long-lasting, the little crackers are possibly history’s most essential, least-loved ration for traveling soldiers, sailors, and explorers. They earned all manner of nicknames: sheet iron, teeth dullers, or even insect castles if you had the dubious fortune to find one colonized by various bugs.

People might be surprised to learn then that hardtack is not lost to history in the United States, where it’s taken on a second life in Alaska. There, it’s not known as hardtack, but as “pilot bread,” one of the most ubiquitous Alaskan foods.

“It’s like tap water. We all grew up with it,” says Leif Albertson, a professor at the University of Alaska-Fairbanks. Everywhere you go in Alaska, you’re likely to run into Sailor Boy Pilot Bread in its distinctive blue-and-white box. “Every tribal office, every village, right next to the coffee machine, there’s a sleeve of pilot bread,” Albertson says.

The state gets about 98 percent of the pilot bread made by Virginia’s Interbake Foods, which is the chief manufacturer of pilot bread for the United States. Interbake sponsors racers in the Alaskan Iditarod, and some of the dog-sled mushers carry the round, flat crackers with them for the trip. For years in Ketchikan—a city in the state’s southeast—there was an International Pilot Bread Festival. And across the state, Alaskans host cooking competitions to see who can come up with the most innovative ways to eat it, resulting in everything from pilot bread moose burgers to pilot bread sundaes.

As Joshua Hunt recently explained in an article on Eater, Alaskans carry this local preference—and reverence—even when they venture far from home. When they move away, they’re faced with the virtually impossible challenge of finding a distributor elsewhere.

Zona Starks, a food historian who focuses on the Arctic, explains that hardtack first showed up in Alaska during the Gold Rush of the late 1800s. The Anchorage Daily Times was advertising the sale of pilot bread (a name borrowed from New England, where hardtack was modified with ingredients like shortening to become more palatable) as early as 1916. According to Starks, Alaska is the perfect place for hardtack because “it’s a desert up there, so it never gets wet and goes bad.”

Starks says that while it started off as a food popular among Euroamericans, Indigenous Alaskans working on infrastructure for the U.S. military, such as the DEW Line (a series of radar stations to warn about possible attacks), were exposed to pilot bread in the mid-1900s, and it spread throughout the state. Today, “every corporation [Indigenous community organizations] has boxes and boxes of pilot bread” at their community centers, Starks says.

Pilot bread’s continued survival in Alaska is largely due to the fact that many parts of the state are still remote and rely heavily on shelf-stable foods: 82 percent of the state’s communities don’t have highway access, so most food has to come by boat or by plane. And foods don’t get much more shelf-stable than pilot bread: The individual shelf life of a box is 10 years, but they can easily survive longer than that.

Even now that rural Alaskans have more choices, people still opt for pilot bread. Mary David, a resident of Nome and vice president of Kawerak, Inc. (a nonprofit providing services to Indigenous Alaskans in the Bering Strait area) broke it down this way: “If I go to a grocery store and they have a similar cracker, I’ll choose pilot bread … It’s just a brand many of us grew up on.”

For hikers, hunters, and people going fishing, pilot bread is an easy choice because you can just grab a sleeve of crackers and put it in your backpack. The fact that it’s sold everywhere means it’s an easy thing to grab on your way into the bush. As a survival food, it’s unparalleled. You can stumble across a cache of pilot bread and be completely confident that it will be edible and nourishing. Albertson adds that, from a dietary perspective, it’s a far healthier option than other sugary, preservative-laden Western foods geared toward hunting and other outdoor activities.

So how does modern pilot bread compare to the hardtack of yore? The modern cracker definitely is easier on the teeth. According to John Billings’s Civil War memoir, The Army of the Potomac, soldiers broke up their hardtack with the butt of a musket or, if desperate, a fist. Billings cautioned that “they could not be soaked soft, but after a time took on the elasticity of gutta-percha [a rubbery product obtained from the gutta-percha tree].”

Pilot bread, on the other hand, doesn’t require soaking or smashing. In almost all cases, it’s a delivery vehicle akin to most other modern crackers or slices of bread. “You know how kids like peanut butter and jam sandwiches?” David asks. “Well, we had peanut butter and jam and pilot bread.” Albertson agrees that peanut butter is a good topping, but adds that butter, salmon spread, roe, or even Crisco are other common options. And even though no one’s soaking their pilot bread until it becomes rubbery, people have been known to dip it in coffee.

In Indigenous communities, pilot bread makes for a good pairing with foods such as muktuk (whale skin and blubber), herring eggs, or reindeer or caribou soup. (For the latter, “you soak it up like biscotti,” Starks adds.) For David, using pilot bread to soak up leftover seal oil at the end of a meal is a special way to enjoy it. For her, the main appeal of pilot bread is its crunchiness.

Another perk of that crunchy texture? As Albertson jokes,“it never goes stale because it starts stale.”

Feast on These Recipes From America's National Parks

The Art of Eating Well in Antarctica

With resourcefulness and a little help from international neighbors, a volunteer crew thrived in the icy landscape.
food

This microscopic treasure was collected from a remote site near the Arctic Circle.
volcanoes

Alaska’s Great Sitkin has been grumbling for nearly a year.
Video • Object of Intrigue