Deep in the Tatacoa Desert, There's an Observatory Unlike Any Other - Atlas Obscura
Want to see fewer ads? Become a Member. 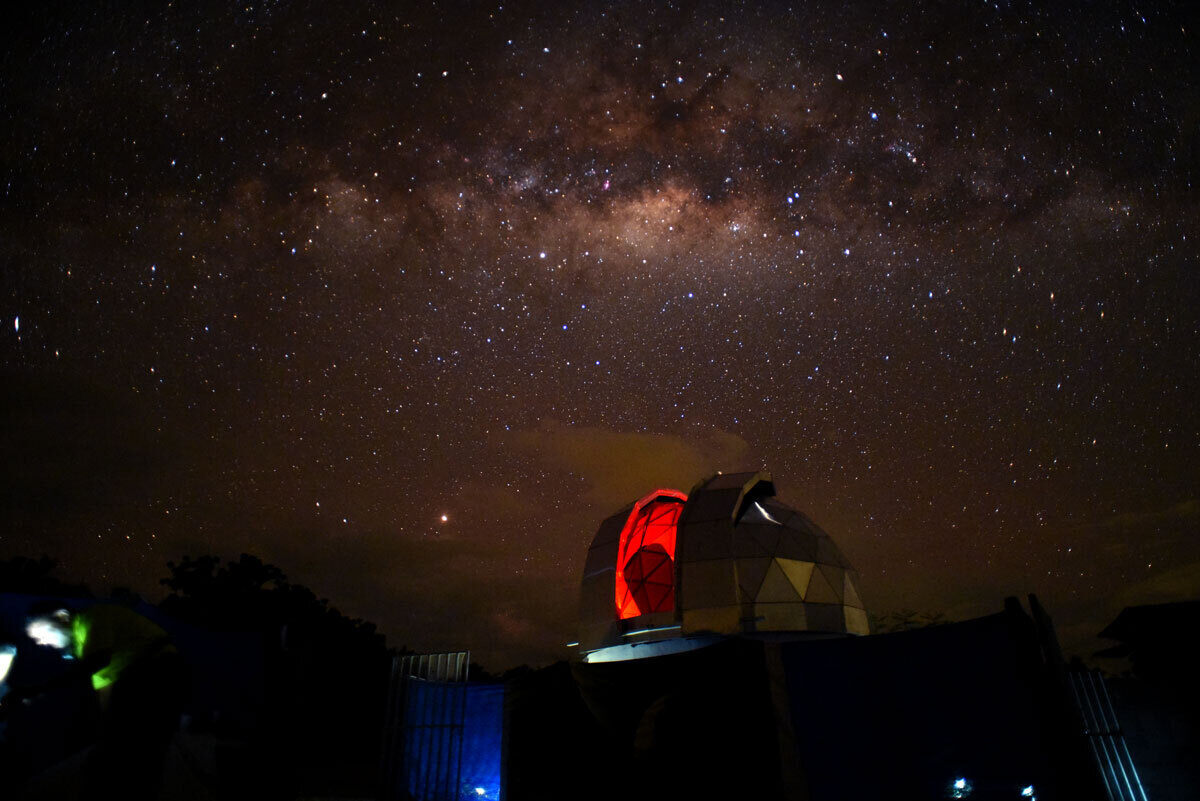 The observatory in the Tatacoa Desert. Javier Restrepo
In This Story
Place

A self-taught astronomer fell in love with the stars and built his own observatory in Colombia.
Place

Unparalleled stargazing, one of Colombia's best observatories, and a swimming pool can all be found in the middle of this ancient tropical forest.
Destination Guide

Ask around for Javier Fernando Rua Restrepo in his home pueblo of Villavieja in Colombia, and locals will nod knowingly and point you in the direction of his modest apartment. Most people around here are familiar with Restrepo: After all, he is the astronomer who built his own observatory in the nearby Tatacoa Desert.

Restrepo’s is not the only observatory in Tatacoa, a region known internationally for its constellation viewing. Nor is it the biggest or most modern; those claims go to the government’s official Observatorio Astronómico de la Tatacoa.

But Tatacoa Astronomia offers something different. Restrepo likes to point out that thanks to the generosity of scientists around the world, it is better stocked with top-range telescopes than the government’s observatory. It is only open on starry nights, and only when Restrepo is able to tend to it himself, as he is the sole employee. From the outside it looks like a makeshift camp, but step inside and Restrepo’s enthusiasm, eagerness, and love for the stars make it something special.

A rarity for the inhabitants of Villavieja, Restrepo was not born in the pueblo. He grew up in Cali, a gruelling 230 miles away.

When he was a child, Restrepo developed a love for astronomy not from school, but from his family. “My father was a big reader of astronomy books and science books, and he had lots of books by Carl Sagan and Isaac Asimov,” he says. (This conversation was conducted in Spanish and translated.) “When I was growing up, the science education in schools was not very good. Especially in cities like Cali, where I am from, space for interaction with science didn’t exist at all.”

As he grew older, Restrepo finally started to understand the books in his house. “I started to get to know like-minded people in Cali, and I found out about an astronomy association in the city, and so I signed up,” he says.

One day following a small conference at Cali’s Universidad del Valle, a member of his club suggested watching the imminent Comet Hale–Bopp—dubbed by NASA as the “great comet of 1997”—“somewhere very dark.” The group decided to head to the Tatacoa Desert. The trip would be Restrepo’s first visit to a place that would eventually become central to his life.

“The day came to meet at the bus terminal and no one turned up,” Restrepo remembers. “So I just went on my own, saw the comet, and then returned to Cali. But within a month, I went back—I couldn’t stay away.”

Although Tatacoa is known as a desert, it is technically a dry tropical forest. Thanks to its remote position, nearly 30 miles and more than an hour’s drive away from the nearest town of Neiva, Tatacoa has no light pollution to muddy its view of the stars. Up to 88 constellations—that is, all of the official ones—are visible over the course of a clear night.

Tatacoa’s warm, dry climate also helps with stargazing. When a star’s light rises and falls rapidly, a phenomenon known as twinkling or scintillation, it can be hard to spot the star in the night sky. A stable atmosphere, which happens in either dry spots or in places at a high altitude above sea level, decreases scintillation and increases the quality of stargazing.

Between its location and its dry atmosphere, Tatacoa’s view of the sky is extraordinary.

Restrepo, who never attended university and describes himself as a “self-taught astronomer,” camped for nearly two years in Tatacoa, as he couldn’t afford proper accommodation.

“I just wanted to see the stars,” he says. “Every night I would take my small telescope and I would look up at the sky. Maybe some people would say that wasn’t any kind of life. But for me, it was like heaven.”

The government opened its observatory in 1994, and Restrepo started working there in 1999, after “pestering them to employ me.” He worked there for 15 years until he was laid off in response to budget cuts.

“So, I just thought, why not build my own?” Restrepo says. “The comet led me to this amazing place and I am still here.”

Restrepo had managed to save enough money while working for the government to buy a small plot of land, just a few square meters large, in Tatacoa, and build the structure of his own observatory. He fenced off the small building with tarpaulin, to give a sense of excitement and intimacy inside.

However, it was another matter stocking the observatory with the right equipment.

In 2015, Restrepo opened his observatory’s doors with just one telescope: his own. Initially few people came. But as Colombia’s reputation as a country for backpackers grew, the DIY observatory attracted more and more visitors. Word quickly spread, and Restrepo says he started receiving calls from astronomers in Russia, the U.S., and Europe wanting to find out more and asking how they could help. Although the scientists didn’t donate financially, Restrepo says he has constant moral support whenever he is in need, and a few even donated their own telescopes.

Stargazers from as far flung as China, Iceland, and Australia come to Tatacoa Astronomia to view the stars, while Restrepo’s “star party,” which he holds once a year in July, has become popular among tourists and locals alike. Not to be confused with Fiesta de Tatacoa, a thumping electronic festival held by the superclub Baum, the Fiesta de Estrellas is a quieter affair, with participants camping in the grounds surrounding the observatory, and watching the stars to the sounds of traditional Colombian music. It’s an occasion to gather with other astronomy aficionados, participate in workshops, and have the chance to go for a midnight hike. Guests also receive an attendance certificate.

“There was one man,” Restrepo recalls, “who came to one of my star parties. He was so impressed with what I was doing he bequeathed me his telescope that he’d brought with him.”

Representatives from almost all of the country’s major universities have taken part in the star party. Benjamín Calvo-Mozo, a respected physicist from the Universidad Sergio Arboleda, has been “especially supportive,” as has Colombia’s National Astronomy Network, says Restrepo.

“When I see a starry night, it becomes the crowning moment of my day, apart from my wife and children, who are of course very important,” he hastily adds. “But to see the sky on a clear night is just something extraordinary. It is hard to put it into a short sentence.”

In his study, which doubles as his daughter’s bedroom, Restrepo keeps a huge collection of physics and astronomy books. He also has numerous framed pictures of accolades: awards, pictures with astronauts, letters from NASA. He’s become a well-known name in the astronomy world, but fame and fortune don’t register in his orbit.

“The stars… they put my life into its tiny perspective,” he says, “and they constantly remind me there are greater things out there.”

How to Find 2018’s Brightest Comet

Seeing it for yourself will take some planning and effort.
astronomy

Apep has the right conditions for the biggest known explosion in the universe.
maps

The Dazzlingly Colorful Atlases That Brought the Night Sky Within Reach

Inside a Historic Observatory That Almost Went Up in Flames

Lick Observatory in California has lived to see another starry night.
Read more
Thanks for sharing!