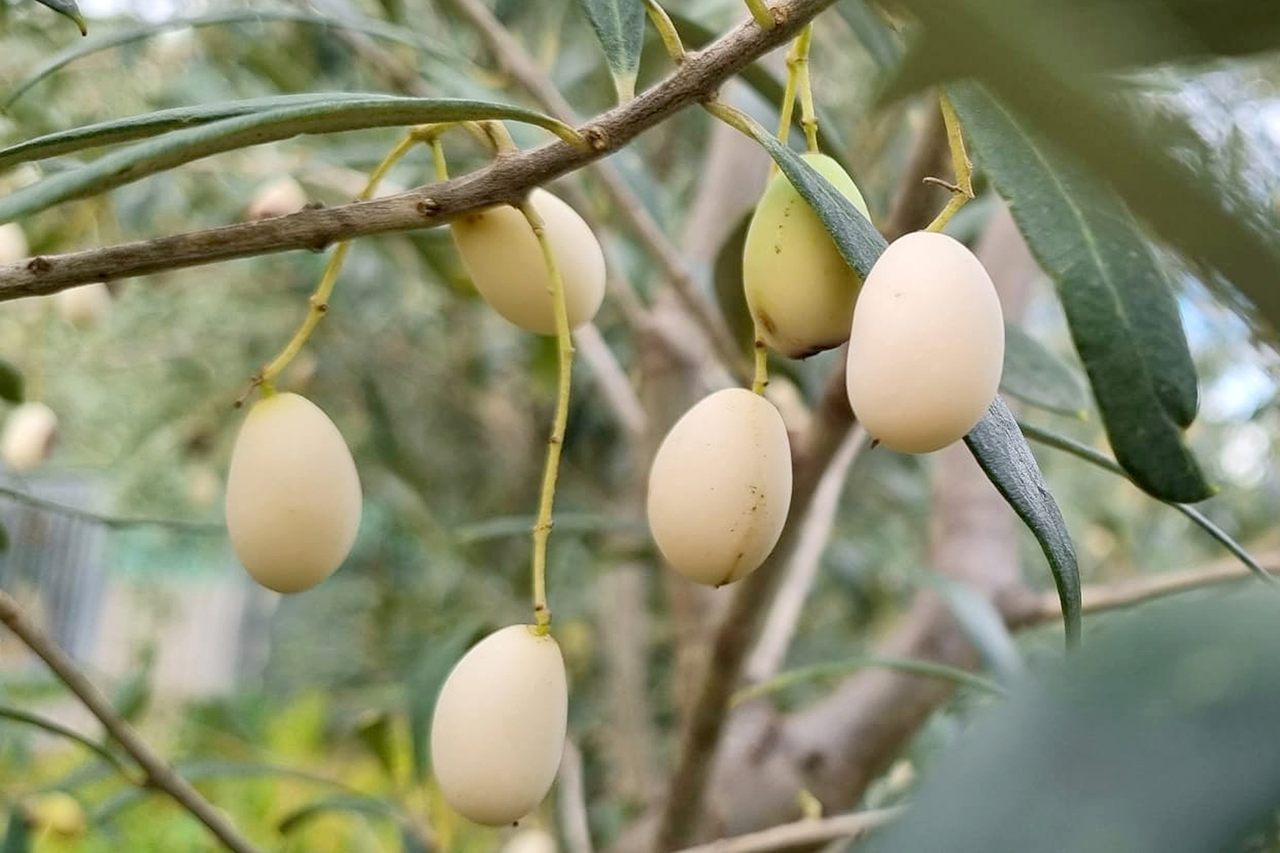 Olea leucocarpa is the academic name of this mysterious white-fruiting tree. Leonardo Zaccone
In This Story
Destination Guide

Calabria, the southernmost region of the Italian peninsula, is the birthplace of some of the world’s most well-known myths, such as the terrifying tale of Scylla and Charybdis immortalized in the Odyssey. Yet one local curiosity remains in obscurity. Wander through the gardens of Calabrian churches or abandoned farmland in late autumn or early winter and you may glimpse it—a tree that appears to be strung with pearls. But this tree is no myth.

Archaeologist and native Calabrian Dr. Anna Maria Rotella first heard about the Olivo della Madonna, an ancient white-olive cultivar, in 2017, while working at an archaeological excavation site in Catanzaro. Due to their stunning appearance, locals have long called them the Olive Trees of the Madonna.

Despite growing up in olive-rich Calabria, Rotella had never seen such a tree, and her curiosity was piqued. While on-site, one of the workers told her unfortunate news from his hometown nearby: their last Olivo della Madonna had been lost to a fire. Hearing this, Rotella became determined to discover if other such trees still existed.

“I called everyone,” Rotella remembers. “I refused to accept that these trees had all disappeared.”

Calabrian landowners, olive-oil makers, and locals all told Rotella about where the trees once were, along with colorful and sometimes confusing stories. But eventually, she collected enough confirmed sightings to begin mapping the locations of the trees still standing.

Later that year, she saw an Olivo della Madonna for the first time. The tree was about 50 years old and adorned in abundant, resplendent white olives. “I understood then the sense of the sacred,” says Rotella. “Any Calabrian that has the fortune of encountering one does not see anything that appears different from the other olive trees for the whole year, then one day passes by again and they perceive the transformation.”

“No, not the transformation,” she muses, after a pause. “But the magic, the miracle of this thing that should be black, but instead becomes white.”

Rotella explains that, historically, many Calabrians have felt deeply connected to religious stories of survival. Such tales give them strength to get through the enormous hardships—from earthquakes to mafia corruption—that have afflicted them throughout the ages. Given this religiosity, the prodigio (an Italian word that can mean “miracle,” “marvel” or “wonder”) of a white-fruiting olive tree “could not be anything but sacred to our great-grandfathers and farmers,” says Rotella.

Exactly how many generations of Calabrians have beheld the Olivo della Madonna remains unclear. “There are no written texts because ours is an oral tradition,” says Rotella. But they have always been rare: Only a few living Calabrian elders have memories of the trees.

It is possible that the Olivo della Madonna has been growing in scattered spots throughout the Mediterranean for thousands of years. To date, Rotella has identified about 120 of these trees growing around Calabria, the oldest of which began to grow around three centuries ago.

The olives are only white when fresh. In brine, they darken like other olive varieties, which are green when unripe due to chlorophyll and later become black when fully ripe due to their anthocyanins. The pure white color of the Leucocarpa comes from a genetic lack of these pigments. Rotella plans to continue experimenting to preserve this particular characteristic in the olives beyond the harvest, but her primary focus is on the preservation of the trees themselves.

As recently as 50 years ago, the trees were cultivated in the vicinity of churches, which used oil from the olives to light their lamps before electricity reached rural Calabrian communities. The oil was often offered as a donation and may also have been used as a sacrament in blessings, baptisms, and other religious rituals.

But while Calabrians venerated the white olive, they rarely consumed it. Rotella has uncovered very few past or present instances of the oil or olives being used as a part of local cuisine, besides accounts from farmers of frying the olives and eating them as a frugal, simple snack while working. The oil from white olives is transparent and, according to Rotella, was generally considered too spicy and unusual for the Calabrian palate.

The white olive trees standing today face many challenges. Most are threatened by climate change, which has led to increasing instances of infestations of olive fruit flies, drought, extreme heat, and wildfires. Rotella is working to raise awareness to protect the oldest trees, while also growing new ones at specialty plant nurseries. Her work is driven by a personal sense of awe in the plant’s existence, but increased plantings may prove useful in supporting genetic diversity among Italian olive cultivars.

Securing funds to do so has proved difficult, but Rotella has found success returning to the Olivo della Madonna’s religious roots. Through collaboration with Calabrian churches over the past two years, she has planted trees front of at least 80 places of worship, increasing the known number of white olives in Calabria to more than 200. Now, she is looking to extend this initiative beyond Calabria, into Sicily and Northern Italy, as well as more broadly across the Mediterranean, with help from growers and organizations with an interest in preserving Italian culture and natural biodiversity in Europe.

Rotella remains hopeful that other white olive trees will be discovered beyond the 200 she knows of so far or has herself helped to plant. More trees may ensure that this sacred, living artifact will not become mere myth.

What’s the Real Christmas Tree Capital of the World?

A company is using garden trees to revive an ancient industry.
islands

Kalimullah Khan was inspired by a crossbred rose bush.
trees

In Palestine, Protecting One of the World's Oldest Olive Trees Is a 24/7 Job