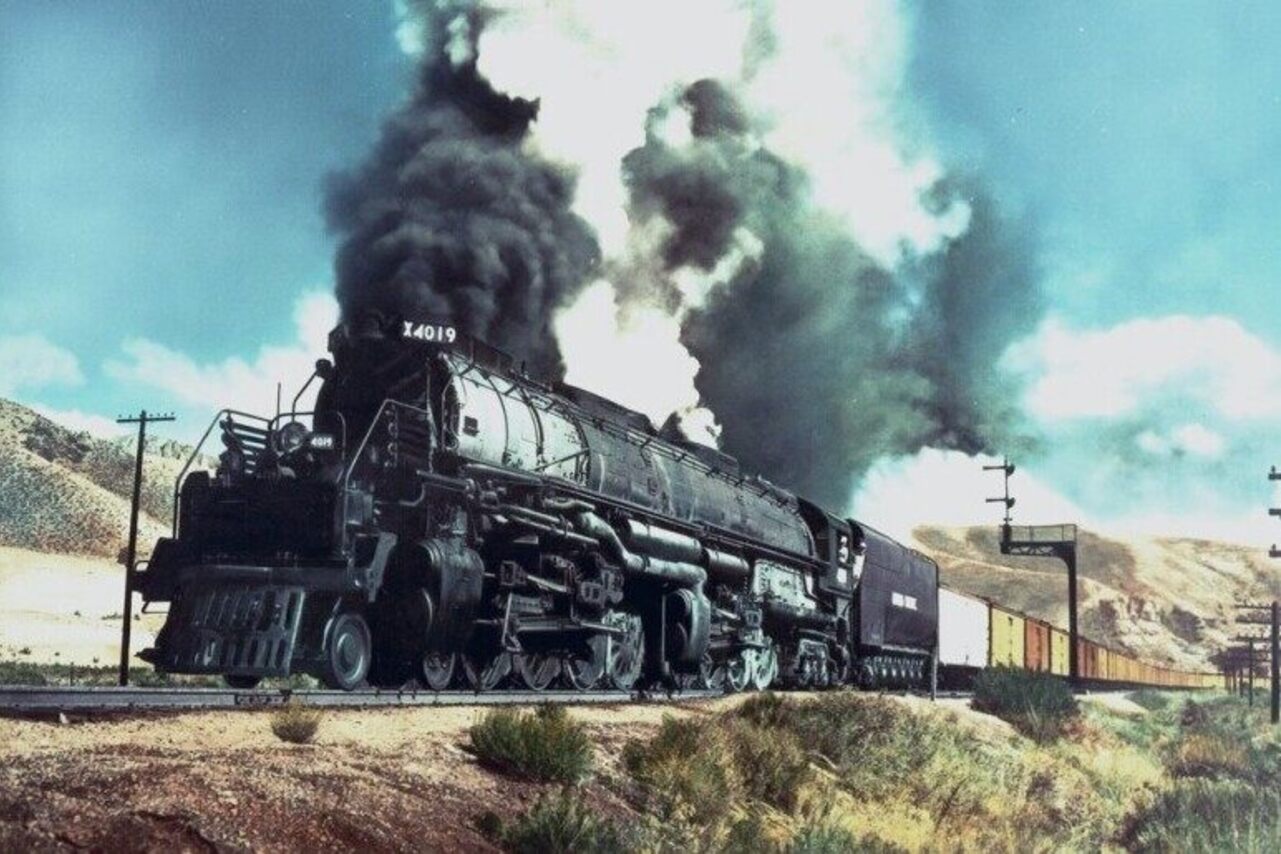 Seventy years after the First Transcontinental Railroad was completed in 1869, the steep Rocky Mountains of Wyoming and Utah were still giving the Union Pacific Railroad trouble.

Despite having massive steam engines, the Union Pacific, one of the biggest railroads in America, still struggled to move heavy freight trains over the mountains and would often have to use multiple locomotives to get trains to their destination. This practice required more workers and more fuel. In 1940, the Union Pacific’s mechanical engineers teamed up with the American Locomotive Company to build one of the world’s largest steam locomotives, a class of engine simply known as “Big Boy.”

Now, six decades after the last Big Boy was taken off the rails, the Union Pacific is rebuilding one of the famous locomotives in honor of the upcoming sesquicentennial celebration of the first Transcontinental Railroad. It’s a project so ambitious that Ed Dickens Jr, a Union Pacific steam locomotive engineer and the man leading the rebuild, has likened it to resurrecting a Tyrannosaurus rex.

The Big Boy locomotives weighed more than one million pounds and were 132 feet, 9 inches long. Stood on its end, one would be the equivalent of a 13-story building. Each one cost approximately $265,000 to build, or about $4.4 million in today’s money. In the railroad world, the Big Boys were known as 4-8-8-4 articulated type locomotives. That designation meant the locomotive had four wheels in front, two sets of eight driving wheels (the large wheels connected to the pistons that make the locomotive move) in the middle, and four trailing wheels, all underneath one enormous boiler.

Union Pacific purchased 25 of the Big Boys between 1941 and 1944. According to Trains Magazine, the steam engines were originally going to be named “Wasatch,” after the mountains they were built to carry freight over, but in 1941, an American Locomotive Company shop worker wrote “Big Boy” in chalk on the front of the locomotive and the name stuck. Below the steam engine’s new name, the unknown laborer also scratched a “V,” a popular symbol for victory during World War II, a conflict in which the Big Boy locomotives would soon play a pivotal role.

Locomotive No. 4000, the first Big Boy, left the American Locomotive Company factory in Schenectady, New York, in the summer of 1941 bound for its new owner. The enormous steam engine garnered attention wherever it went and by one count, more than 500 newspaper stories were written about it before it arrived on the Union Pacific’s tracks in Omaha, Nebraska, on Sept. 4, 1941. Locomotive No. 4000 and the other Big Boys were quickly put into service just as the Allied war effort was heating up. Between 1941 and 1945, the steam engines helped move millions of tons of war supplies and other materials, according to the historian John E. Bush, a self-described “Union Pacific steam locomotive nut” and author of numerous train books and a Trains Magazine blog about the locomotives. “Without the Big Boys, the Union Pacific could never have moved all that material for the war effort,” Bush says.

The Union Pacific used the Big Boys until 1959, when they were replaced with diesel-electric locomotives, which were easier and cheaper to maintain, although arguably less impressive than a noisy, smoke-belching steam engine with its symphony of moving parts. Most of the Big Boys were scrapped, but eight were put on display around the country.

Although some steam engines still operate at museums and heritage railroads, for decades railroad enthusiasts believed the Big Boys were simply too big to ever run again. For one, the infrastructure needed to maintain such a massive locomotive had been torn down at the end of the steam era, and even if someone did rebuild one, there were few rail lines that could handle a machine of that size. But in 2013, Union Pacific announced that it was reacquiring a Big Boy in hopes of restoring it for the 150th anniversary of the completion of the Transcontinental Railroad. In spring 2014, Big Boy No. 4014 was moved from Pomona, California, where it was on display at the RailGiants Trains Museum, to Cheyenne, Wyoming, where Union Pacific keeps and maintains two other historic steam locomotives for special events and excursions.

Bush, the railroad historian, was lucky enough to ride the Big Boy No. 4014 when it was hauled back to Wyoming by a pair of diesel-electric locomotives. He says highways along the rail line were packed with onlookers watching the unrestored steam engine roll down the tracks. “It was awe-inspiring,” he says. “It was a dream come true for many.”

Since the locomotive’s arrival at Union Pacific’s shop in Wyoming, mechanics have been slowly rebuilding it, which requires the disassembly, inspection, and repair of every single part of the locomotive. The steam engine will also be altered so that it can burn oil which is easier to acquire than the coal it once burned back in the 1940s and 1950s. “This is a massive ground-up restoration,” Dickens says.

Dickens hopes to have No. 4014 completed and operating on its own power before May 10, 2019, the 150th anniversary of the Transcontinental Railroad. The first trip is expected to take the locomotive to Ogden, Utah, not far from where the Golden Spike was driven at Promontory in 1869.* The ceremonial spike joined the rails of the Union Pacific from Omaha with the Central Pacific Railroad from Sacramento, connecting the the East Coast with the West Coast by rail for the first time in American history. Today, Promontory is a national historic site.

Bush expects train enthusiasts and history buffs from around the world to line the tracks from Wyoming to Utah when the Big Boy makes its first run in 60 years.

“I cannot think of a bigger way to celebrate this anniversary than restoring a Big Boy locomotive,” Bush says. “This is something railroad enthusiasts have dreamed about for more than a half-century.”

The connection between New Orleans to Los Angeles can still be felt today.
railroads

After restoring the monster locomotive, Ed Dickens is hitting the rails.
Related

It's all thanks to Big Boy No. 4014, the world's largest steam locomotive.
Read more
Thanks for sharing!