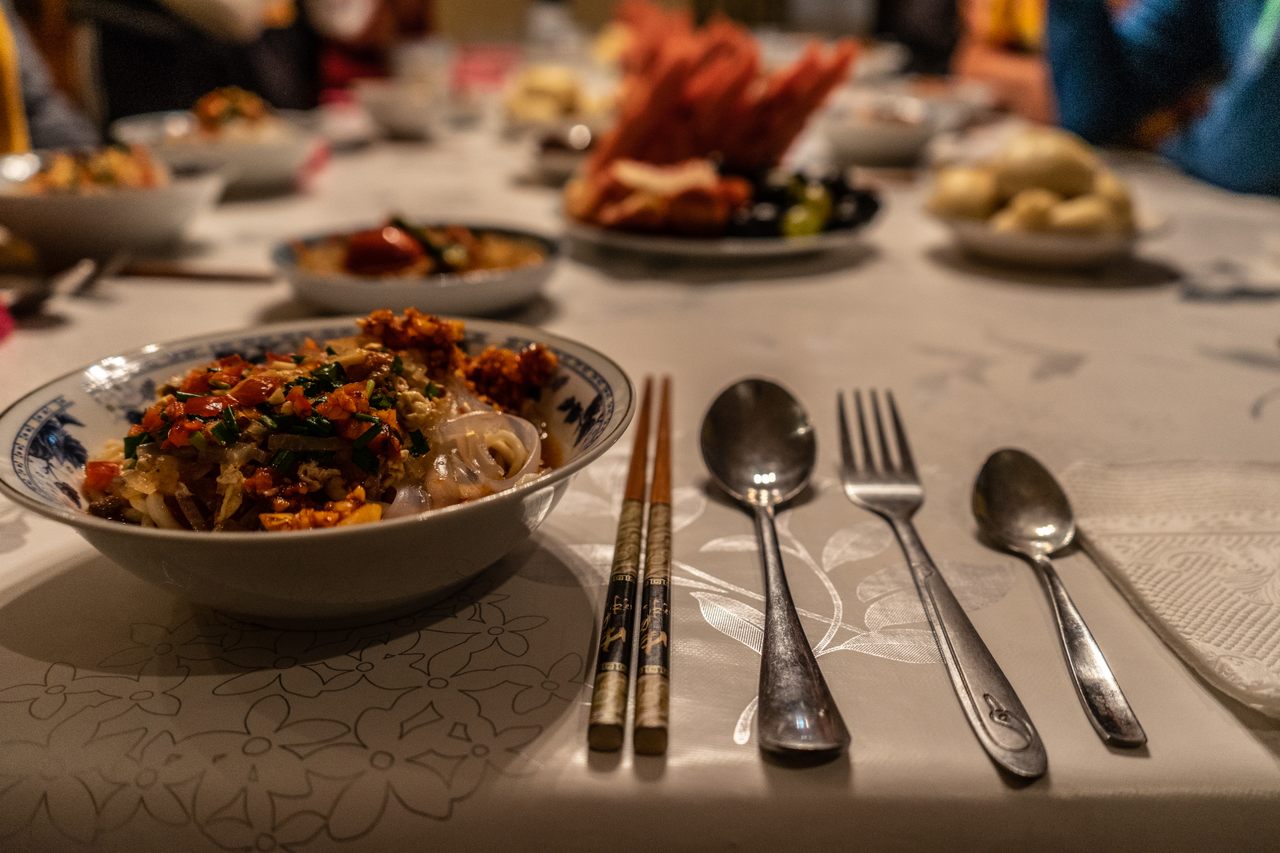 A bowl of Ashlan Fu, ready to be eaten with chopsticks. All photos by Richard Collett
In This Story
Place

On the shores of Kyrgyzstan's Issyk-Kul Lake, a family cooks a feast that tells the sad tale of a people's exile.
Place

“Have you ever eaten Ashlan Fu?” Aman Janserkeev, a young Kyrgyz student, asks as he guides me through the city of Karakol. “It’s the best cure for a hangover.”

Ashlan Fu, a soup mixed with Laghman and starch noodles, is one of the most popular dishes in Kyrgyzstan. Prepared with copious quantities of vinegar and chilli, alongside egg and diced vegetables, it’s extremely spicy and best served cold. Kyrgyz students love it for its low cost, and almost everyone else appreciates its supposed restorative qualities.

“Some of my friends might eat Ashlan Fu once, twice, or even three times a day,” Janserkeev says when I ask about the dish’s popularity. At the unsubtly named market street of Ashlan Fu Alley, students, the elderly, and entire families greedily slurp down huge bowls that cost just 30 Som (50 cents) for breakfast, lunch, and dinner. Ashlan Fu, though, is not native to Kyrgyzstan.

Despite its enthusiastic consumption by locals, this dish was brought to Kyrgyzstan by the Dungans, exiled Chinese Muslims who fled over the Tien Shan Mountains after a failed rebellion in 1877. Even as Dungan language and culture has been diluted in their new home, their food has remained a constant, all while becoming a fixture of Kyrgyzstan’s culinary scene.

In the small village of Yrdyk, just outside of Karakol, I meet Luke Lee. A spritely old man, he is the enthusiastic curator of the local history museum and a descendant of the first Dungan refugees to make the long journey to Kyrgyzstan.

In a distinctly Chinese-inspired Dungan house that displays a curious blend of Soviet, Kyrgyz, and Dungan exhibits, Lee recounts the legends and myths of his ancestors. “I want to tell you a story,” he says, “of the Dungan people.” In poetic fashion, he describes the seventh-century arrival of Arab warriors in western China who brought with them the Islamic faith that the Dungans still practice today. “The Emperor wanted these warriors to stay, and they were given Chinese wives,” Lee says. (Historians also cite the ebb and flow of Arab traders in seeding early Muslim influence in China.) For centuries, cultures and people intermingled, until the failed rebellion in the 19th century.

When fighting broke out, it was a continuation of longstanding tensions and rival alliances. The Muslims of western China had fought the Qing Dynasty when it was established in the 1600s, and they faced religious and ethnic discrimination. The resulting war involved many parties, lasted 15 years, and was one of history’s bloodiest, resulting in millions of deaths.

“In China, my people are known as the Huizhou, but we would be known in Kyrgyzstan as the Dungans, the people from the east,” Lee explains.

Imperial Russia welcomed refugees who survived the harsh flight over the Tien Shan Mountains. As part of Russian efforts to populate the predominantly nomadic lands with sedentary farmers, they allowed them to settle along the frontier provinces in Central Asia. “My ancestors were mostly farmers, and they were very good at trading in the markets too,” says Lee. “[But] when they arrived here, things were very difficult, to begin with.”

The challenges faced by the refugees were immense. Rimsky-Korsakoff Dyer notes that they received mainly “barren, virgin land,” and many Dungans arrived “maimed … with frostbitten feet.” The agricultural knowledge of the Dungans, though, combined with the ability to market their produce, helped establish the first communities around Karakol, and helped make them welcome. From the start, Ashlan Fu was a big part of that recipe.

As early as 1897, just 20 years after the Dungans first crossed the Tien Shan, Russian writers and world travellers were already praising Dungan cuisine. In an early description of Ashlan Fu, two Russians, V. Tsibuzgin and A. Shmakov, wrote that “Dungan food is very distinctive and mainly consists of noodles made of wheat or pea flour and spiced with such ingredients as chili, onion, garlic, vinegar, salt, radish, and cucumber.” While also taking note of Dungans’ affinity for cards and the women’s hairstyles, they added, “Dungan food is very tasty and of great variety.”

But Dungan language and culture was not equally embraced. Scholar Elisabeth Alles writes that when the Dungan first arrived in Kyrgyzstan, they “still used their specific Chinese local dialects (Gansuhua and Shaanxihua), but very early they lost familiarity with Chinese characters.” For the last century, the Dungan language has been written in Cyrillic. During the Soviet years, Alles writes, many Dungans were sent to gulags or executed, and after the collapse of Communism, the diaspora was separated across newly formed countries and pressured to show national loyalty.

Despite cultural hardships, Dungan cuisine has retained many of its original features and has been undeniably embraced. Indeed, Rimsky-Korsakoff Dyer writes that despite fundamental shifts in Dungan culture (“Their clothes and even more so their homes have undergone a change”), their food has hardly changed at all (“They still use chopsticks, and the names of their dishes and cooking terms are Chinese”). While Dungans were assimilating Russian and Kyrgyz language and culture, it was the Russians and Kyrgyz who were adopting Dungan food, particularly Ashlan Fu.

In Yrdyk, after seeing rusting farming tools, Dungan clothing, and Soviet military uniforms in Lee’s museum, I’m invited into the house of Mamieva Hamida, where her family is busy preparing a traditional Dungan dinner. They first show me, of course, how to prepare Ashlan Fu. We mix Laghman noodles, starch preserves, onion, garlic, chilli, dark vinegar, and egg into a round bowl. But this is just the start of the feast.

“You must eat every dish, or you cannot leave,” Hamida says as she sets out more and more dishes. Amongst the dumplings and soups are Chinese-inspired, sweet-and-sour entrees and several Kyrgyz and Russian specialities. As I eat, I enjoy that none of the foods dominate or feel out of place. They all complement each other.

The Quest to Collect the Stories of Bengalis in Harlem

The project has spanned decades and continents.
maps

On the shores of Kyrgyzstan's Issyk-Kul Lake, a family cooks a feast that tells the sad tale of a people's exile.
Vila Nova de Gaia, Portugal

On the shores of Lake Superior, a small group of monks makes sacred sweets.
Want to see fewer ads? Become a Member.
From Around the Web
Atlas Obscura Trips
Silk Road Cities of Central Asia
View This Trip
Thanks for sharing!