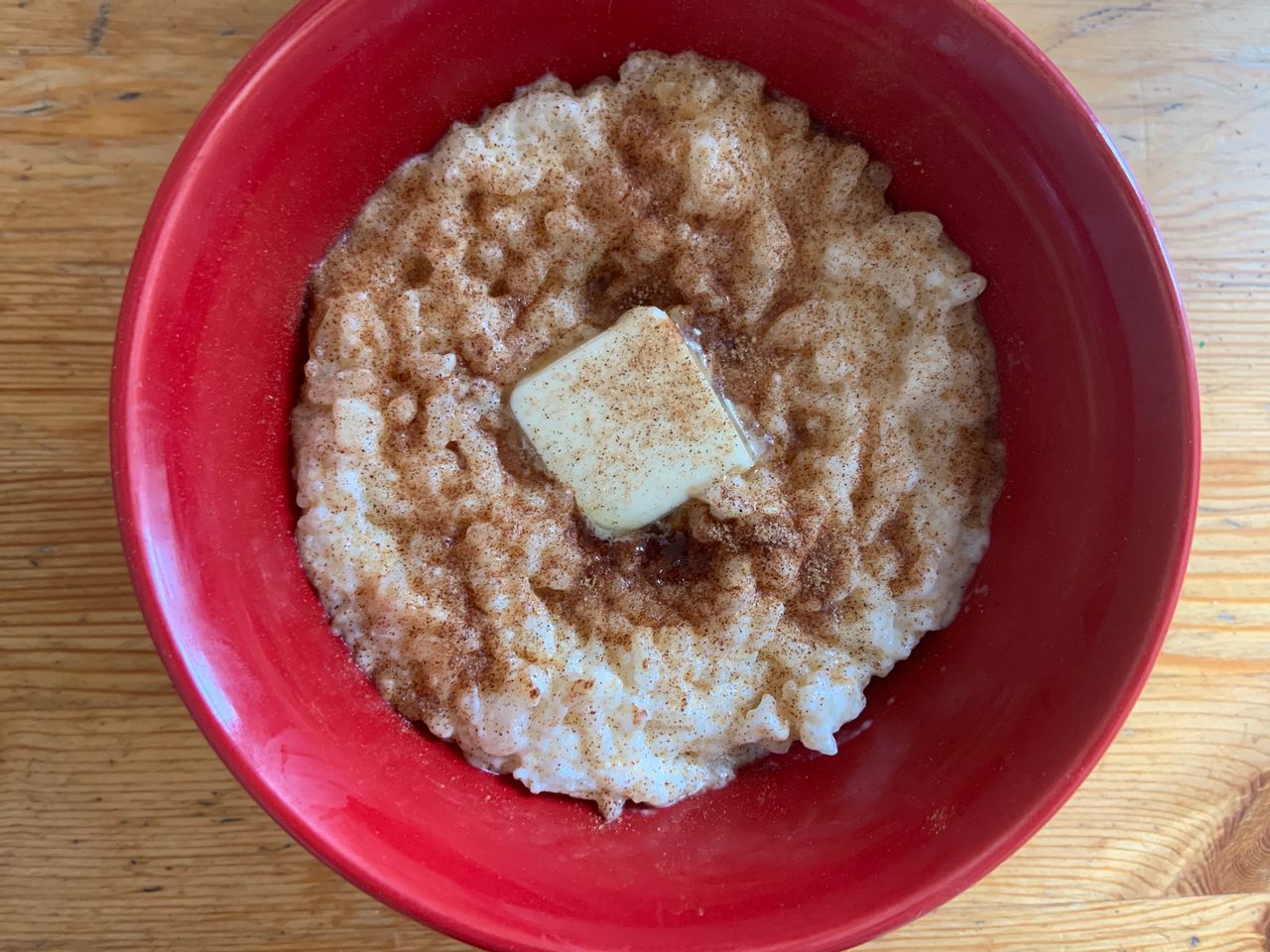 Leaving a bowl of risengrød out for the nisse is akin to leaving cookies and milk out for Santa. Sam O'Brien for Gastro Obscura

This month, Gastro Obscura is sharing the recipes and stories behind amazing holiday dishes and drinks in an ongoing series, Home-Cooked Holidays.

In the winter of 1984, Timothy Tangherlini worked on a dairy farm on the Danish island of Funen. One day, while brushing cattle in the barn, he spotted a tiny man in a hat sitting on the back of one of the cows. When Tangherlini tried to speak to the stranger, the little man jumped out the barn window. Assuming it was a trick, he told the couple that owned the farm about the encounter. They both shrugged. “That was the nisse,” they explained.

Tangherlini is now a professor of Scandinavian folklore at UC Berkeley. Whether or not one truly believes the tales, the barn-dwelling “house elves” often known as nisse have been figures in folklore across the Nordic region since at least the late Middle Ages. Farmers believed that surviving a hard winter depended on the nisse’s whims, which were mercurial. Keep your farm’s nisse happy, and he’d make sure your milk stayed fresh and your livestock remained healthy. Disrespect him, and you might find your cow dead in the morning.

Nineteenth-century depictions of the nisse show a child-sized, bearded man in a pointy red cap, the traditional garb for farmhands. Yet earlier portrayals were much more monstrous. In an illustration from Olaus Magnus’s 1555 book, A Description of the Northern Peoples, a demonic-looking creature sweeps a barn. Tangherlini notes this may be one of the earliest known illustrations of a nisse.

A family that wanted to stay on their nisse’s good side could offer him a tasty present. On Christmas Eve, before the harsh winter had truly set in, farmers left a bowl of porridge in the barn. Everyday porridge was made by boiling barley, rye, or oats in water. But the nisse received something special: a luxurious, sweet porridge of rice boiled in milk and topped with butter.

Woe to the person who forgot the nisse’s butter. In one story, a milkmaid decides to play a trick on her farm’s nisse, hiding the butter beneath the porridge. Seeing his offering ungarnished, the nisse flies into a rage and kills the family’s cow. When he finishes his meal and realizes his mistake, he “solves” the problem by stealing a neighbor’s cow and delivering it to his family’s farm.

Even though most Danish families no longer live on farms, the tradition of leaving an offering to the nisse continues today. Just as American children might leave cookies and milk for Santa Claus, many Danish children leave a bowl of risengrød, a type of sweet porridge (or rice pudding), for the nisse. While the tradition endures, though, the nisse himself has changed. The historic nisse was a powerful supernatural being, but modern depictions have reduced him to something of a jolly Christmas elf. The nisser (nisse, plural) that beam out from holiday cards today are a far cry from the dangerous nisser of Christmas past.

Tangherlini, who has studied nisser since his experience on Funen, is fortunate to have not encountered an old-school nisse. “He’s not a cute, fun little thing. He reacts completely out of proportion to slights,” he says. “In tales that were still being told on farms up through the 19th century, there are stories of the nisse teasing the farmhand, then the farmhand teasing right back, and then the nisse comes and kills him. The nisse doesn’t care about people, really. The nisse only cares about the farm and keeping the farm healthy.”

As farming industrialized throughout the 19th century, it lost some of the frightening unpredictability that fueled superstitions. Anne-Mette Marchen Andersen, a curator at the National Museum of Denmark, says that the nisse was a way for rural farmers to explain seemingly-random events like illnesses among livestock. “They had these thoughts because they couldn’t explain bacteria or things like that,” she says. As people gained a better understanding of agricultural science, the nisse didn’t need to serve the role of scary scapegoat anymore.

Thus began the nisse’s transformation from magical, murderous farmhand to Christmas elf. The nisse made one of its earliest Christmas appearances in the 1830s, when the artist Constantin Hansen displayed nisse-themed decorations at a party. Soon, other Danish artists started depicting the nisse with a warmer, idyllic touch. He even gained a female companion and gradually lost his scowl. By the end of the century, happy little nisser were appearing on Christmas cards, playing in the snow and wrapping presents.

By the mid-1900s, the transition from nisse to julenisse (Christmas nisse) was complete. “Now you can see the nisser have become kind of silly and completely focused on Christmas,” says Tangherlini. “By this time, the majority of people are urban and the nisse has become kind of defanged.” Instead of wreaking havoc on your farm, his pranks are tame: “Maybe he’ll steal your left sock.” In fact, Marchen Andersen notes that some Danes now play a game, the drillenisse, in which someone acts as a “teasing nisse” (akin to a secret Santa) and plays pranks on a victim throughout December. “They might put a grain of rice in your shoe or dye your milk green,” she says.

The merciless nisse of yore might cringe at some of his modern descendants, such as bramming nisser, cartoonish cutouts that families place throughout their home for the holidays. The images depict beaming, apple-cheeked nisser tucking into bowls of porridge, playing with cats, or sitting on Christmas tree branches.

While the nisse has lost his edge, the tradition of paying delicious tribute to him with porridge remains. Families still enjoy some risengrød on December 23 or 24, often pairing it with a Christmas ale (a type of very light seasonal beer that often features nisser on its label) or blackcurrant juice. As they eat, the children might sing “The Nisse in the Barn,” a popular Christmas song. It tells the story of a nisse who’s trying to keep rats from stealing his porridge:

For a meal that’s “good and sweet,” try the below recipe for risengrød and leave a bowl out for the nisse on Christmas Eve. Just don’t forget the butter.

The story of this saffron-hued swirl has become as twisted as its dough.
santa claus

At Milwaukee’s Krampusnacht, we go in search of the essence of Santa’s unholy enforcer.
trees

Cooking with evergreens has a long history.
holidays

How a fiery bowl of booze became a Christmas classic.
List