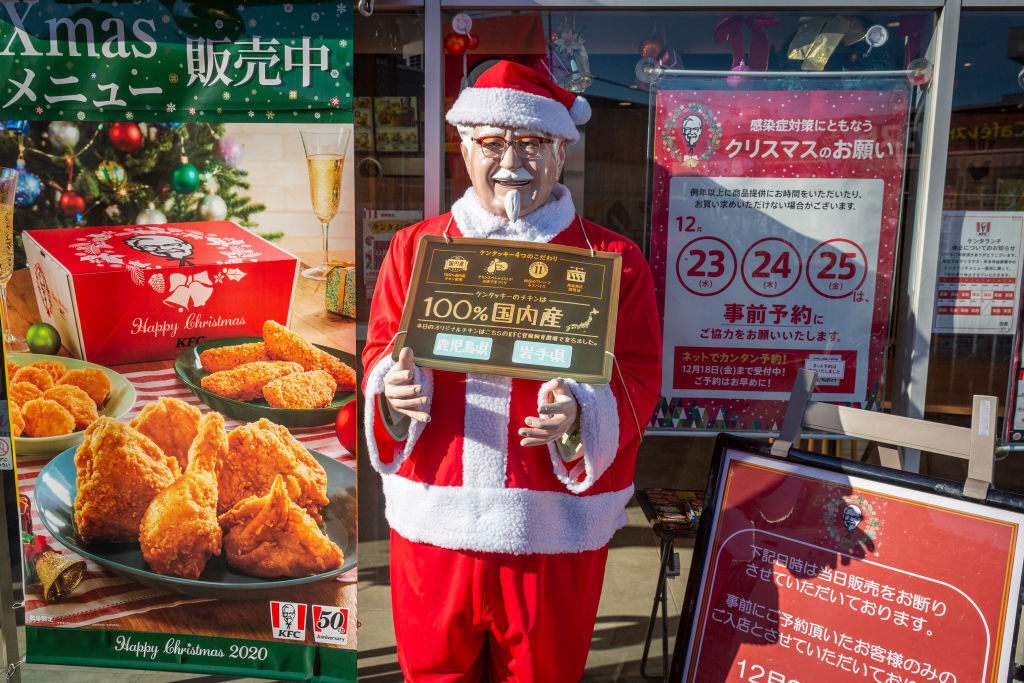 This year, millions of people across Japan will celebrate Christmas around buckets of Kentucky Fried Chicken. Families will order “Party Barrels” weeks in advance, replete with this year’s offering of cole slaw, shrimp gratin, triple-berry tiramisu cake, and, of course, fried chicken. Santa-clad Colonel Sanders statues will stand at attention outside storefronts, grinning mutely through December as KFC Japan sales multiply tenfold, earning the chain a third of its annual income. The corporate promotion is one of Japan’s longest-standing Christmas traditions.

As with most Christmas traditions, it all started with a marketing campaign. For years, English-language media cited company spokespeople, who said the idea came from expats looking for an alternative to turkey. There was never a reason to doubt the company’s account, until the man who brought KFC to Japan spoke up. Takeshi Okawara, manager of Japan’s first KFC, came forward in recent years with a confession that upended years of innocent origin narratives—a confession that KFC denies. The man who brought the Colonel to Japan says it started with a lie.

After visiting a KFC test-store in the 1970 World Expo in Osaka, a young entrepreneur named Takeshi Okawara was smitten by the late-stage success of the company’s founder, Harland Sanders. A restless businessman himself, Okawara was humbled by the jovial American who job-hopped into his 60s before hitting the big time with his first KFC. When a recruiter offered Okawara an administrative position, he declined, opting instead to be the in-store manager of Japan’s very first KFC. “By doing that I can learn and study about how to make wonderful fried chicken, by myself, from scratch,” he told Business Insider’s podcast Household Name.

The KFC that Okawara opened in Nagoya in 1970 failed so miserably that Okawara was left nearly homeless, sleeping on sacks of flour in the kitchen to save on rent. The red-and-white striped roof and English signage confused pedestrians. “No one knew what the hell we were selling.” Okawara told Household Name. “They’d come in and say, ‘Is this a barber? Are you selling chocolate?’”

The only thing that kept him going was the magical taste of Sanders’s fried chicken. “The more I tasted it, the more I was convinced this business will be okay,” he told Household Name. On the verge of defeat, Okawara’s shot at redemption came from a nun at a nearby Catholic school.

In his telling, Okawara was hired to dress as Santa-san and hand out fried chicken for a kindergarten Christmas party. Knowing his business was on the line, however, he went above and beyond the call of duty. With the spirit of Colonel Sanders and Santa-san wrapped in one, he stole the show. “I started dancing, holding the barrel of chicken. ‘Kentucky Christmas, Kentucky Christmas, Happy Happy,’ like that,” he told Household Name. “I made up a song, and danced around. Kids liked it.”

After another elementary school hired him to do the same thing, Okawara realized Christmas could save KFC Japan. Nathan Hopson, professor of Japanese history at the University of Nagoya, writes in an email that by 1930, Christmas was firmly entrenched in the Japanese psyche: Newspaper ads depicted “The Old Man of the North” and families exchanging gifts, while Christmas Eve dance and theater shows were popular with at least the urban public. The only thing missing was a Japanese answer to traditional Western Christmas foods.

Okawara promoted fried chicken as a substitute for traditional Christmas turkey, which the Japanese knew from TV and cinema was eaten for Christmas throughout the West. Selling chicken and sides together in Christmas-themed “Party Barrels” and decorating his store’s Colonel Sanders statue as Santa-san brought in enough customers to save his business.

With word of the Christmas “Party Barrels” making their way across Japan, the national broadcaster NHK interviewed Okawara about his role in bringing the Colonel to Japan and asked if KFC for Christmas was a common custom overseas. Unable to turn down such a glaring opportunity, the young entrepreneur said yes. “I still regret that, but people liked it because it was something good [they thought came] from the U.S. or European countries,” he told Household Name.

The Christmas promotion saved his business, and once KFC Japan recalibrated its business approach to the Japanese market, the chain thrived. By 1973, KFC Japan had expanded to 75 locations (making it the largest fast food chain in the country, according to the Christian Science Monitor in 1973) and the Kurisumasu ni wa Kentakki, or “Kentucky for Christmas” promotion, ran at each and every one. By 1986, there were 600 locations, according to the Ottawa Citizen. Okawara had risen to CEO of KFC Japan, and a new holiday tradition was cemented.

A lack of pre-existing Christmas traditions among the largely secular Japanese, or perhaps Colonel Sanders’s striking resemblance to Santa Claus, made the infusion a shoo-in. It also helped that the associations most Westerners have with fast-food establishments such as KFC never made it to Japan.

“In the 1970s, KFC and other family restaurants were seen as trendy and hip, not just fast and convenient,” writes Dr. Eric Rath, professor of Japanese history at the University of Kansas, in an email. “One could bring a date there and not feel ashamed.”

Dr. Nathan Hopson, professor of Japanese history at the University of Nagoya, writes that in the same way that some young Japanese couples long for Christian-style “chapel” weddings, “Christmas has an association with a kind of exotic and romantic view of ‘the West’ that is entirely divorced from history, religion, or any other inconvenient facts.” He also points out that because so few, if any, Japanese homes feature ovens, buying take-out chicken fits the Japanese mold: “Christmas cakes and KFC make sense both in terms of the constraints of the typical Japanese home and as empty symbols—like Christmas itself—into which everyone can pour their own hopes and dreams.”

KFC Japan declined to comment further about Okawara’s story, and, half a century on, I could not locate the NHK tape that could confirm that Okawara birthed “Kentucky for Christmas” with a lie.

Regardless, its origins don’t negate the power the tradition has to unite families over buckets of hot food. Okawara’s business savvy saved his company and gave millions of Japanese families a reason to get together for the holidays. As one Japanese man told Household Name, eating fried chicken every year “is what makes Christmas, Christmas.”

If only there were a cookie-cutter solution.
holiday

In Wisconsin, Christmas Calls for Raw Meat on Rye

Importing golden tejocotes to the U.S. is finally legal.
victorian

Snapdragon is not for the faint-hearted.
Video • Gastro Obscura

Come for the fish sundae, stay for the collection of Studio Ghibli cat buses.
Want to see fewer ads? Become a Member.
Related

The Mysterious Tradition of Hiding a Pickle on Christmas Trees

Find a pickle, win a special gift.
Read more
Thanks for sharing!