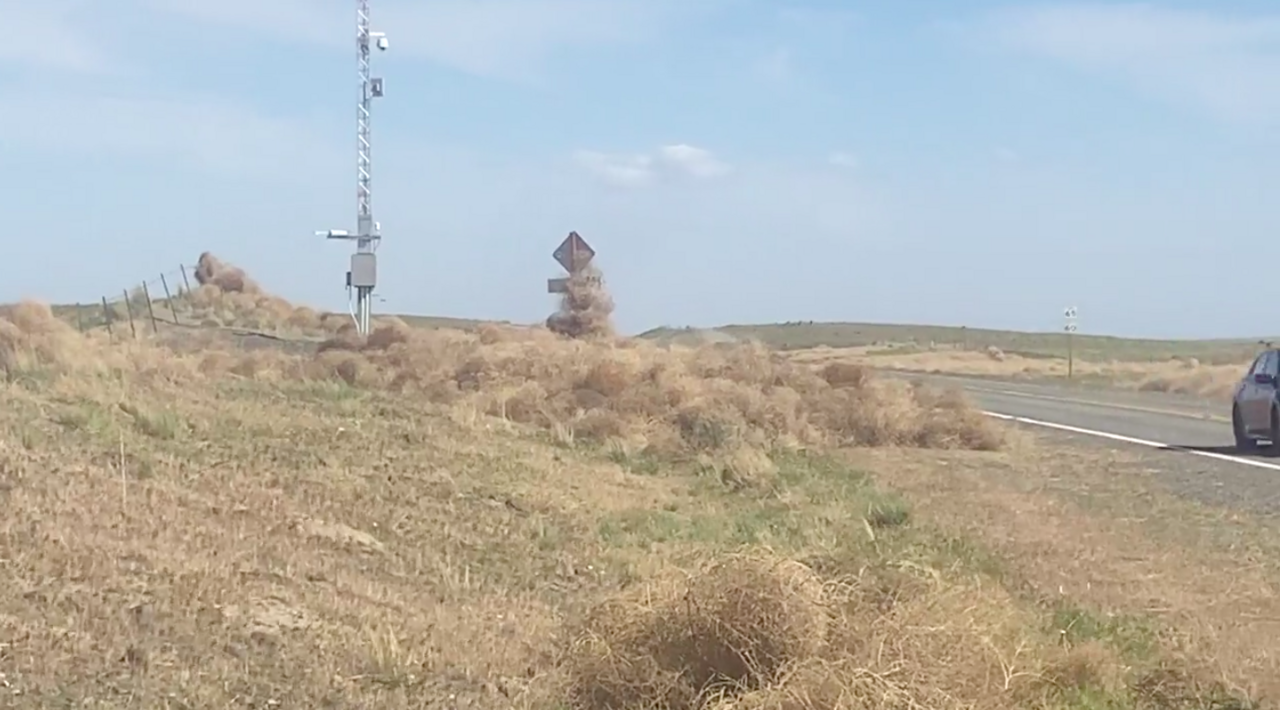 As soon as the vortex passed, Matt McKnight zipped out of the heap that had collected around him, and drove a little ways up the road to pick the plants out of his car. Courtesy Matt McKnight
In This Story
Place

At the end of April, Matt McKnight was driving Bessie, his Westfalia campervan, on State Route 240 in Washington when he encountered something he hadn’t wagered on: dozens of tumbleweeds whipped into a vortex, and heading right for the van.

McKnight is a Seattle-based journalist for Crosscut, an independent news site, and has been traveling across the state to cover the COVID-19 crisis. Bessie is a good companion on these journeys—McKnight can load her up with provisions and then sleep in the back at night, so that he’s not imperiling himself or the communities he covers. He was driving through a vast expanse of flat land when the tumbleweed storm arrived.

Tumbleweed is the final chapter in the life cycle of Russian thistle (an umbrella term that includes Salsola tragus and several other species), a plant introduced to America from Eurasia roughly two centuries ago. When the plants mature, a part of them breaks off and blows away, sowing seeds as it somersaults. Tumbleweeds are commonly seen on American highways, and they snowed in this stretch of State Route 240 back in December; they had to be cleared away with snowplows. But this was something else. “I’ve lived in Wyoming and Idaho and Utah, and the High Desert of California, so I’m not a stranger to tumbleweeds,” McKnight says. “I’m not a stranger to dust devils, either, but I’ve never, ever in my life seen two of them merge together and then come straight at my face.” McKnight tweeted that the sight looked like a “tumbleweed tornado.”

A few minutes before the bizarre sight, McKnight saw a lone tumbleweed scuttling down the road; he thought it looked cute, and kept driving. “Then I saw kind of a mass of them coming—maybe 15—and I was like, ‘Oh, that’s kinda cool. There’s more.’” He slowed down a little, but pressed on. Then he and Bessie crested a small hill. “I saw a tumbledevil, a tumblenado, whatever you wanna call it, forming on the side.” It seemed like a good time to stop. “I was like, ‘Okay, hell no. I’m not going to be driving into that thing.”

McKnight put the car in park but kept the engine on, and he propped his cell phone up against the dashboard. He started filming a video, and within seconds, tumbleweeds were battering the windshield, just a few inches from his face. In the recording, they sound like noisy, flapping wings, and McKnight says it was even louder in person. The video also features a little creaking, as McKnight steadied himself to get a good angle—but there aren’t any shrieks. “I wasn’t nervous as they started hitting me,” he says. “I was like, ‘Okay, this is kinda crazy,’ but at the same time, I had my journalist I’m-just-gonna-be-calm-and-see-this-through type of demeanor.”

It was over in five or 10 seconds, he says. When the storm passed, he looked behind him and saw it clearing the fence onto the Hanford Nuclear Reservation, which once produced plutonium for the bomb that detonated over Nagasaki in 1945. By the time the “tornado” blew onto the grounds of the old facility, it had lost some steam. “I think it tapered off pretty quickly,” McKnight says.

He didn’t stick around to find out. “My biggest concern in that moment was, I’ve got a running engine and dry tumbleweed,” he says. “Knowing that tumbleweeds are really dry and they’ve been known to start fires, I wanted to get out of that pile really quickly.” He drove through a heap of 30 or 40 tumbleweeds that had surrounded Bessie, and then pulled over around 50 feet down the road to pick bits of tumbleweed from the grill and from underneath the van. It was still pretty windy, but not dangerous, and a few more tumbleweeds kept bumping toward him. “It was just normal tumbleweeds hitting the van, and me kicking and cursing them.” Days later, he found a bit of charred tumbleweed while tightening a loose screw in the engine.

McKnight thought his footage would appeal to his coworkers, and maybe to a couple buddies in Seattle. Instead, it racked up more than 1.2 million views on Twitter and was broadcast on Good Morning America. McKnight suspects that it was a welcome break from news about the pandemic, and he’s been hearing three kinds of responses to the footage. Some people think he should pair it with the winsome, wistful Sons of the Pioneers song, “Tumbling Tumbleweeds.” Others joke that it’s proof that we’re all doomed—or that “nature is healing” with many of us hunkered down at home.

“Apparently, everybody needed the tumbleweed tornado,” McKnight says. “You just look at it and it spins and it either makes you feel scared or happy.” McKnight and Bessie will be back on State Route 240 in the coming week or so—hopefully, this time, without any tumblenados along for the ride.

A tradition of anonymous charity lives on in the age of COVID-19.
plague

This isn't the first time they've come in handy during a pandemic.
nature

Why 'Nature Is Healing' Might Be the Best Pandemic Meme

"People wanted so much for there to be dolphins in the canals in Venice."
Video • Wonder From Home

Cars slowed to a halt on State Route 240, but the plants just kept bounding along.
Read more
Thanks for sharing!