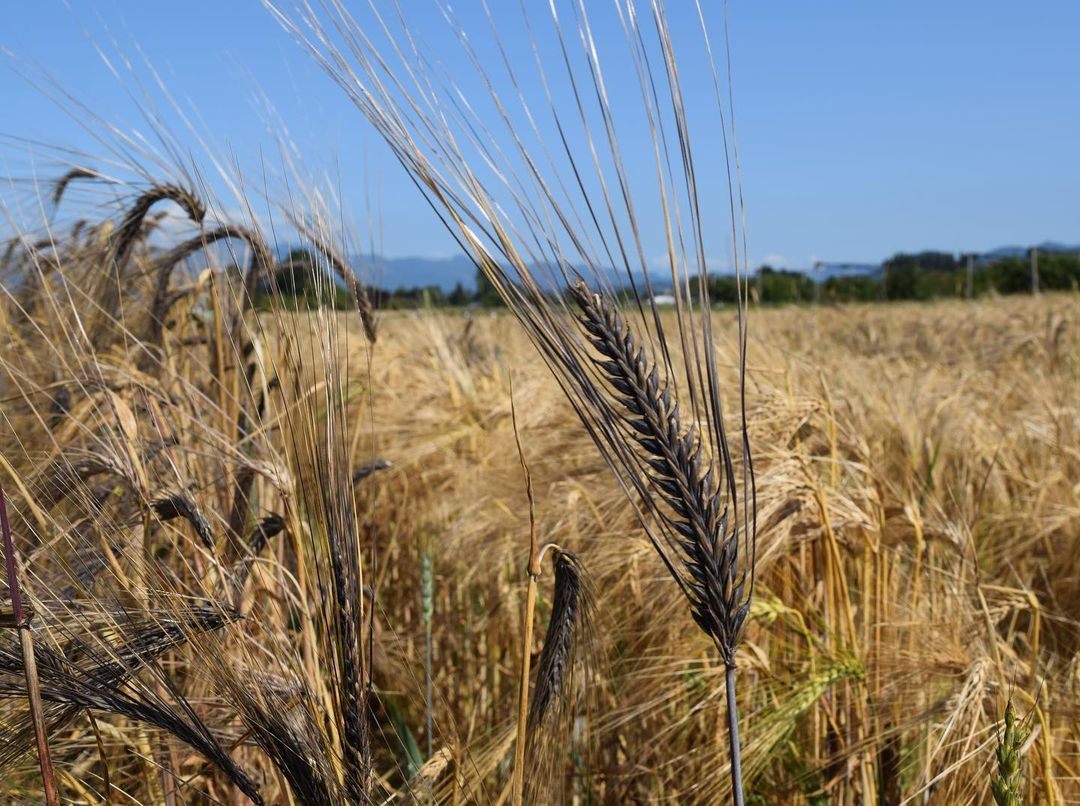 The Bread Lab's grains are very different from what's in most grocery store flour. WSU Breadlab
In This Story
Destination Guide

It has all the trappings of a commercial kitchen: stainless steel work tables, rolling racks of stacked trays, clear containers full of grains and flour. But the apron-clad people busily weighing ingredients and shaping loaves aren’t restaurant chefs; they’re scientists. This kitchen is part of the Bread Lab.

An outpost of Washington State University in western Washington’s Skagit Valley, the Bread Lab is quietly and methodically staging an agricultural revolution. Its focus is breeding, testing, milling, and baking with new varieties of wheat, rye, and barley. The goals are many: creating grains that will thrive despite climate change, providing income for farmers, and, most importantly, turning that grain into great-tasting bread. “We can concentrate on flavor and nutrition and novelty,” says Dr. Stephen Jones, the Lab’s founder and director. “All the things that aren’t valued in a commodity system.”

Jones started his career in that commodity system, breeding wheat for industrial farms. But he eventually became disenchanted with the corporate interests that drove such work. When an opportunity came up to move his research to the Skagit Valley, he thought he’d be mostly breeding vegetables, fruit, or flowers, the most valuable crops in the area. But the farmers he met wanted him to keep working on wheat and barley, which were then low-value cover crops planted every few years to keep the soil healthy. The hope was that “they could actually make money off of that part of their rotation,” Jones explains.

Since 2008, Jones and the Ph.D. students he supervises have worked on developing new grains. The Skagit Valley turns out to be the ideal laboratory, since the area can experience extreme heat, heavy rain, bitter cold and snow, or all three and more in a single year.

The process of developing new, exciting grains is surprisingly uncomplicated. Though commodity breeders may take as long as 15 years to develop a new wheat strain, Jones says that timeline is dictated by their goal of uniformity for the industrial food system. “We do variation and diversity, and that way you can get varieties in four years instead of 15,” he says. One standout has been Skagit 1109. The first variety created specifically for whole-wheat flour in more than 100 years, Skagit 1109 also wows bakers with its rich, nutty taste.

To develop many of its grains, the Bread Lab uses a technique called population breeding: planting thousands of varieties in a single field and studying how each one holds up to the pressures of the growing season. “We let nature prioritize and select things for us,” Jones explains. What that looks like, on a hot July day under a bright blue sky, is Lego-precise rectangles of nubbly, spiky, and tasseled stalks in every imaginable shade of gold and brown—and sometimes purple, blue, red, and black—gently undulating in the breeze.

The system works like a well-balanced portfolio; while some stocks fall in certain market conditions, others rise. Or, to use a real-world example, when the Skagit Valley experienced three days in a row of summer temperatures above 100 degrees last year, some wheat varieties died while others thrived. The genetics of the grain that flourish offer important data about growing wheat in a warming world.

Jones and his students are also encouraging farmers to use this technique and plant a “climate blend” of different wheat varieties. “[The Bread Lab] has put a real focus on diversity and resilience in how I’m farming,” says Keith Kisler, who operates Finnriver Farm and Grainery on the Olympic Peninsula. Kisler, who mills the organic grains he grows into flour, originally got involved because he was interested in the science. Now, nearly every grain he uses was developed at the Lab. “There should be a Bread Lab in every grain-growing region,” he says.

The fact that Kisler, a fourth-generation Washington wheat farmer, has embraced the Bread Lab’s work means a lot. “There’s this fascination and sometimes sort of a fervor about ancient, heirloom, and heritage being better,” Jones says. Yet nearly a third of the 8,000 varieties of wheat, rye, barley, buckwheat, and beans in the Bread Lab’s seed library are newly developed strains. While old plant varieties have tremendous value, Jones believes that moving forward is a breeder’s job.

Although it’s affiliated with Washington State University, the Bread Lab receives no institutional funding beyond Jones’s salary. Considering that Jones founded the Lab to escape the corporate emphasis on monocultures, it’s a bit ironic that all of its work is supported not only by private donors but also corporations. Donors include the King Arthur Baking Company, Clif Bar, Patagonia, and the spirits conglomerate Rémy Cointreau, which sponsors a Ph.D. in barley research and uses Bread Lab grains at its Westland Distillery. “The Bread Lab is a big player in the story we want to be part of: regenerative agriculture, climate-friendly food,” says Jeff Yankellow, director of bakery and food service sales at King Arthur. The company has even set up a baking school on the premises.

Corporate support isn’t just important for financial reasons. Large-scale food producers currently rely on commodity agriculture, which prizes uniformity because it makes scaling up easy. A single type of wheat will ripen all at once and work consistently across recipes. On the other hand, a climate blend of diverse varieties requires more resources to harvest and process, and yields a flavor that isn’t necessarily the same every time. Finding businesses—whether bakeries, pizzerias, pasta makers, breweries, or distilleries—willing to embrace that challenge is vital to the Bread Lab’s research.

Affordability and access are another concern, plus the fact that American consumers aren’t accustomed to eating actual whole wheat. Most of the “whole wheat” bread sold in grocery stores is made from white flour with the bran and germ added back in, along with non-food ingredients, such as the common emulsifier soy lecithin or preservatives like sorbic acid.

This issue snapped into clarity a few years ago. The Bread Lab had been donating whole-wheat baguettes, boules, and other artisan breads to a local food pantry, but found out that the grainy loaves had few takers because they didn’t resemble the soft, sliced sandwich bread that Americans typically eat. “That gave us a challenge,” Jones says. “Could we develop a loaf of bread that’s soft, tastes delicious, is 100 percent whole wheat, and has no non-food in it?” With Yankellow of King Arthur developing the recipe, the Bread Lab’s Approachable Loaf was born. The bread is meant to be priced at $6 or less to make it affordable for more people. “It looks like a loaf of shitty bread,” Jones says. “But it’s not, and that’s the key.”

According to Janine Johnson, the Bread Lab’s head of special projects, the six-ingredient Approachable Loaf has taken on a life of its own. Any bakery can sign on to become part of the Bread Lab Collective and use the recipe, with participants donating a nominal portion of sales back to the organization. “What makes much more of a difference for us is not so much the money paid back to us but the fact that people are baking this bread,” Johnson says, noting that she’s spotted the recipe being used as far afield as Austria.

The natural spread of the Approachable Loaf is an example of what the Bread Lab wants to achieve: making it as easy as possible to embrace whole grains. With successes such as developing a whole-wheat tortilla for the Chipotle restaurant chain and the Approachable Loaf, the future looks bright for the Bread Lab. But Jones’s expectations remain modest. “We don’t have the notion that whole wheat is going to replace white flour because white flour is too powerful, if that makes sense,” he says. “When people are ready for alternatives, there are alternatives out there.”

When Edmund Hillary Went in Search of the Yeti

A Mystery Worm Is Threatening the Future of Washington’s Oysters

Clues from 1,000-year-old shells could reveal the parasite’s past—and portend the future.
science

Hint: It involves way less meat than you might think.
science

This impressively large collection includes crackers shaped like Jimmy Carter, Mickey Mouse, and more.
Want to see fewer ads? Become a Member.
From Around the Web
THE GASTRO OBSCURA BOOK
Taste the World!
An eye-opening journey through the history, culture, and places of the culinary world. Order Now