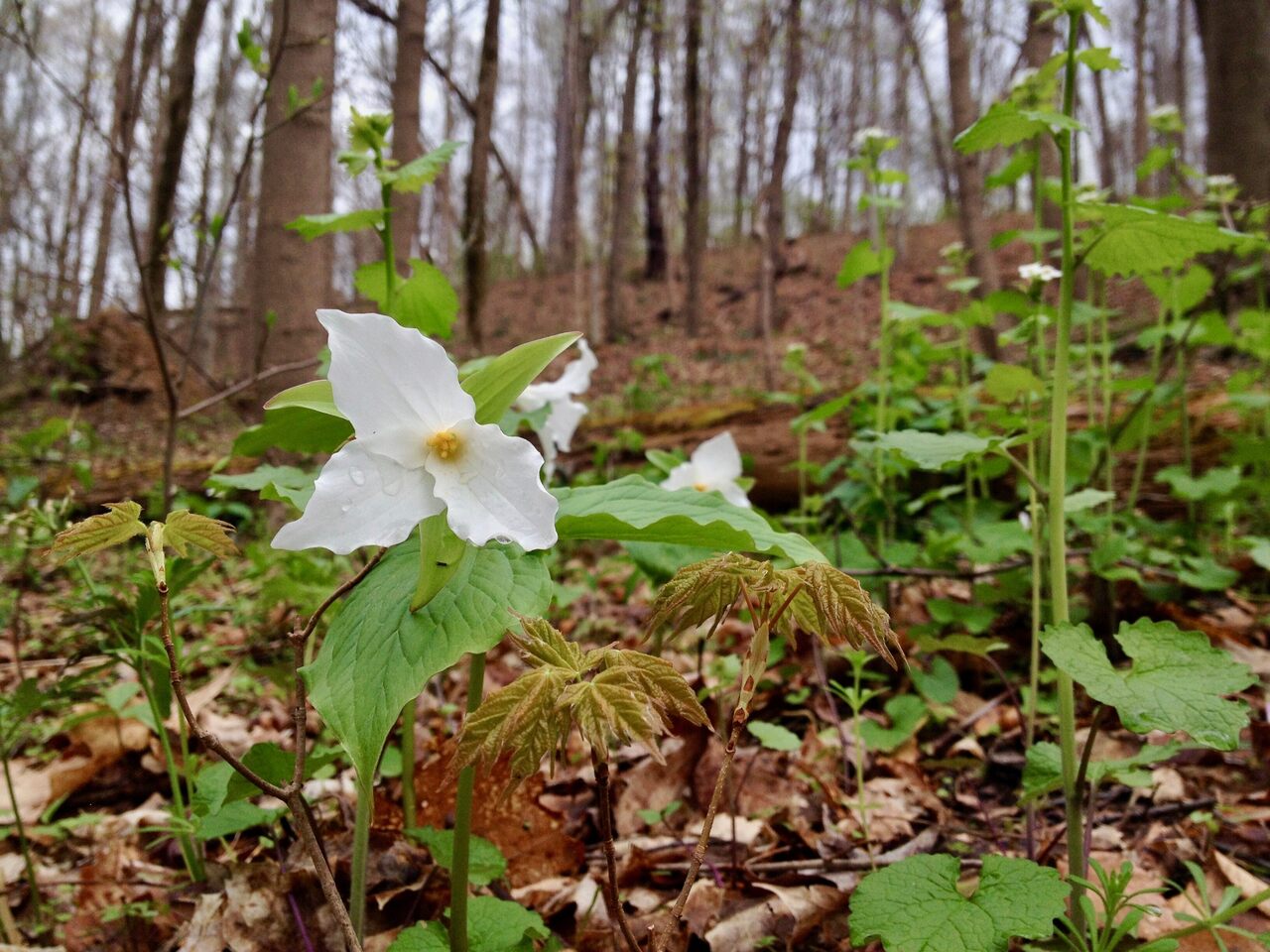 White trillium flowering in the spring as trees begin "leafing out." Courtesy Mason Heberling
In This Story
Place

"the sweltering inhabitants of Charleston and New Orleans, of Madras and Bombay and Calcutta, drink at my well . . . The pure Walden water is mingled with the sacred water of the Ganges."

When Henry David Thoreau chronicled life on Walden Pond in the mid-19th century, the nearest town—Concord, Massachusetts—was approximately four degrees cooler than it is today. Thanks to climate change, the whole region is warmer than it was 168 years ago, when the writer-botanist-philosopher started observing New England’s plant species. And those rising temperatures have caused drastic shifts in the blooming schedule of native trees and wildflowers.

Now, a group of scientists studying the effects of climate change in Massachusetts are mimicking Thoreau’s methodology and using his historic observations as early data sets for their research.

“Thoreau made very detailed, helpful observations on bird arrival times for more than 50 species of birds [and] hundreds of [plant] species between 1851 and 1858,” says Richard Primack, a biologist at Boston University and the director of the Primack Lab. “His observations were clearly very informed and accurate. He would go out every day of the week in Concord for four hours a day, [observe] the leafing of trees, and compile it into tables. It was an extraordinary effort for that time.”

Primack and his team have been conducting research at Walden every spring since 2004, visiting the same places Thoreau did. Their low-tech method for studying when these trees and wildflowers begin to flower involves simply hiking around near Concord with a notebook and pencil, writing down their observations of each individual plant, and taking photographs of the area’s flora. Then they organize Thoreau’s observations and their modern field notes into tables for further study.

“We looked at 14 wildflower species that Thoreau, and another 19th-century botanist, Alfred Hosmer, had observed in Concord,” says BU researcher Caitlin McDonough MacKenzie. Those species include the delicate lady’s slipper, an orchid that appears in early spring with “two incredibly fuzzy leaves” that later turn into a single flower stalk; star flower, a small “understory flower with seven sharply pointed white petals”; and wild sarsaparilla, whose “flowers pop out in a sphere, like fireworks of tiny white flowers.”

In their recently published paper in Ecology Letters, the scientists note that wildflowers and trees are responding to climate change by “leafing out”—the time when plants begin producing leaves—sooner than they used to.

“We found that on average, wildflowers in the understory are leafing out about one week earlier than [they were] in Thoreau’s era, whereas trees are leafing out about two weeks earlier,” says Mason Heberling, a National Science Foundation postdoctoral research fellow who worked on the paper.

Those early tree blooms can also affect how wildflowers blossom. “Trees will shade out the wildflowers in the spring, which will affect their energy,” says Primack. “They depend on having a couple of weeks of full sunlight [to make fruit in the summer and flower buds for the next year].”

While these observations indicate that climate change will likely affect plants all over the world, the wildflowers native to Concord, Massachusetts are particularly site-specific.

Since Thoreau’s time, “New England [has] warmed up about twice as much as the rest of the United States,” says Primack. “That is enough to make the wildflowers flower about eight to 10 days earlier [than they did in the 1850s] … and the trees about two weeks earlier. New England is a good model system because [it has already] warmed up as much as the rest of the country is expected to in the next couple decades. So we can get an idea of how climate change will be affecting the [whole United States] by the midcentury.”

Using a literary text to contextualize nature for environmental research highlights one of the many ways in which art and science inform each other. Much like herbarium specimens in museums can be creatively framed and described, so too can the springtime blooming patterns of Massachusetts wildflowers.

“People are starting to discover that diaries and photograph collections are a valuable source of information,” says Primack. “[In the 19th century], people [were] taking pictures of plants because they’re very beautiful, but they also wrote down the date.”

Thoreau—whose big ideas about the environment and our relationship to it have captivated readers for well over a century—presciently monitored plant behavior so meticulously, Primack says, that he probably would have had a lot to say about climate change.

Now it’s up to us to pick up where he left off.

Feast your eyes or sharpen your brain, from a distance.
forests

Not by themselves, but the Archangel Ancient Tree Archive is out to show how they can help.
art

"HeyJTree" is built like a dating site, but it matches readers with the charismatic, threatened plants.
Video • PinDrop

Why Bears Will Save Cherries From Climate Change But Not Apples

Some plants need help from animals to outrun climate change.
Read more
Thanks for sharing!