Vinegar Hill: Step Into the Old World of Brooklyn - Atlas Obscura
Want to see fewer ads? Become a Member.
In This Story
Place

Walk into the 19th century without leaving Brooklyn. 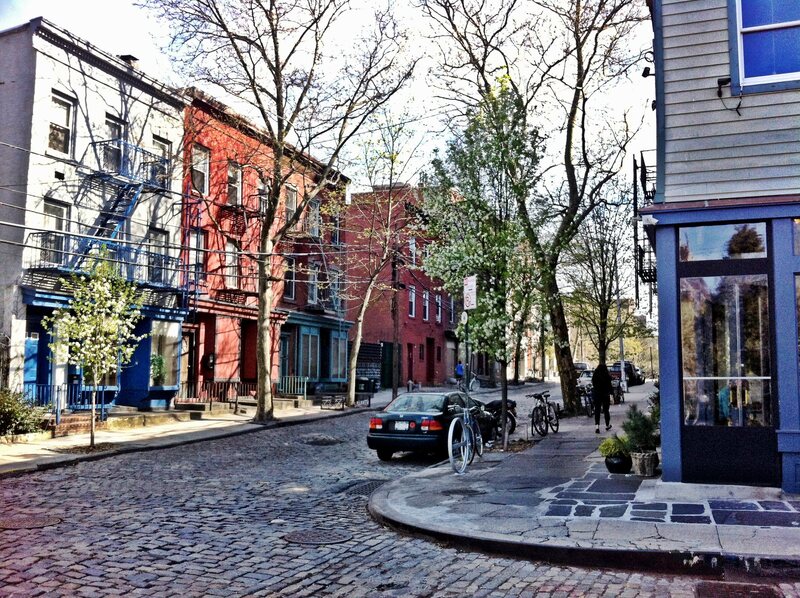 Vinegar Hill in Brooklyn (all photographs by the author unless indicated)

Stumbling out of DUMBO, the Brooklyn waterfront neighborhood that gets its colorful acronym name from being “Down Under the Manhattan Bridge Overpass,” and into Vinegar Hill is like happening upon a quiet European village. Narrow Belgian-style blocked streets lined with Federal and Greek Revival row houses and quaint bistros transport you suddenly out of New York City. Located just steps from the bustling art-filled DUMBO are these few tranquil streets filled with old world architectural oddities and secret gardens.

The first visions for developers of the neighborhood that became of Vinegar Hill were that of summer retreat, called “Olympia” for its elevation. It was envisioned as a place for New Yorkers to escape due to its close proximity to water and cool, river breezes. Because of its limited accessibility, these ideas of a vacationland in Brooklyn didn’t get far.

During the 1800s, Vinegar Hill saw an influx of Irish immigrants through clever real estate marketing. The name Vinegar Hill comes from a famous battle with the Irish and English during the Irish Rebellion of 1798 in County Wexford, Ireland. The developers, John Jackson and Comfort and Joshua Sands, originally purchased the land as an industrial shipbuilding yard. Later, 40 acres were sold to the Brooklyn Navy Yard. These shipbuilding roots are still inherent within the architecture and urbanism of this rather New England-looking enclave. 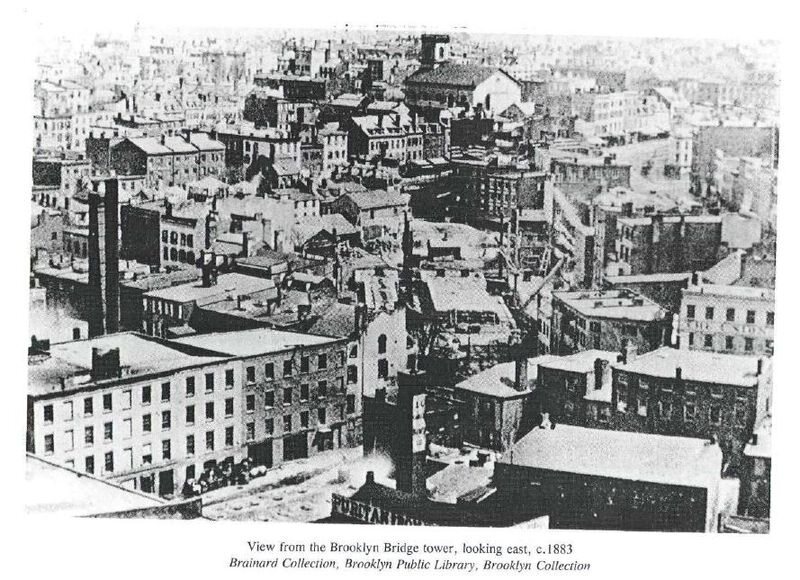 Vinegar Hill viewed from the Brooklyn Bridge in 1883 (via Wikimedia)

The Village of Brooklyn was incorporated in 1816 and with the War of 1812 ending, rapid development of the area ensued. A ferry service was established to and from Manhattan, a tavern opened, and more housing was erected. More game rooms and saloons were in operation, presumably servicing the Navy Yard employees to the north of Vinegar Hill.

As economic growth continued, so did cultural and community life in the neighborhood. Christian churches of many denominations were established, with one even being part of the Underground Railroad in the early 1800s. As the population diversified so did the industry of the area. Iron foundries, coffee works, metal stamping, and more soon began to crop up in Vinegar Hill creating a neighborhood where one could, ostensibly, live and work because of the affordable prices. 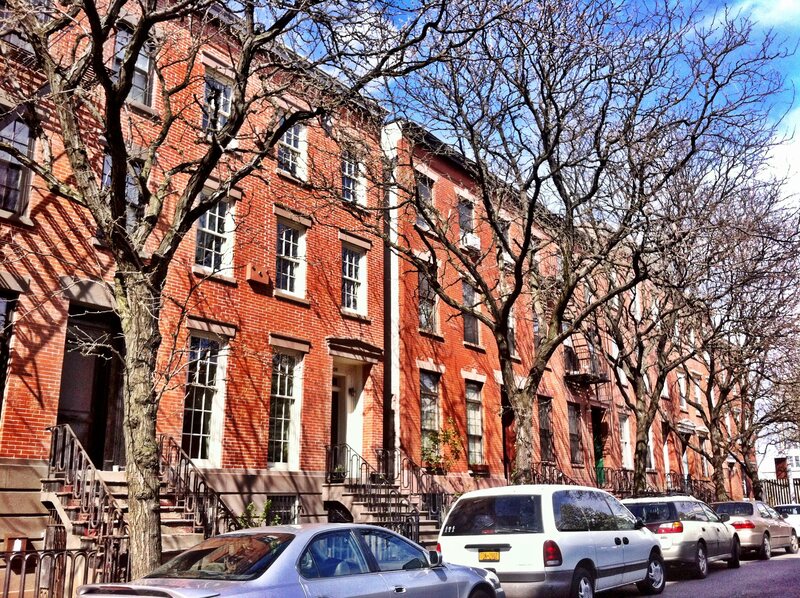 The beautiful housing stock that now characterizes Vinegar Hill is owed to the residential boom of the 1820s to the 1850s, and the increasing popularity in the Greek Revival style. This particular style is said to have been popular because of the association with Greek democracy, and gave the otherwise typical rowhouses of the mostly working class area a more refined feel. Yet it has been argued that the prolific use of the style debased it in a way, causing it to ultimately fall out of style as a result of its overuse.

As the entire borough of Brooklyn grew, so did Vinegar Hill, especially with the Brooklyn Bridge opening in 1883. The new relative ease of commuting into Manhattan made this section of Brooklyn desirable particularly among the well-heeled, although the prevalence of Irish accents still gave the area its nickname “Irish Town.” The late nineteenth century saw an influx of Northern Europeans, as well as a growing Eastern European Jewish population. 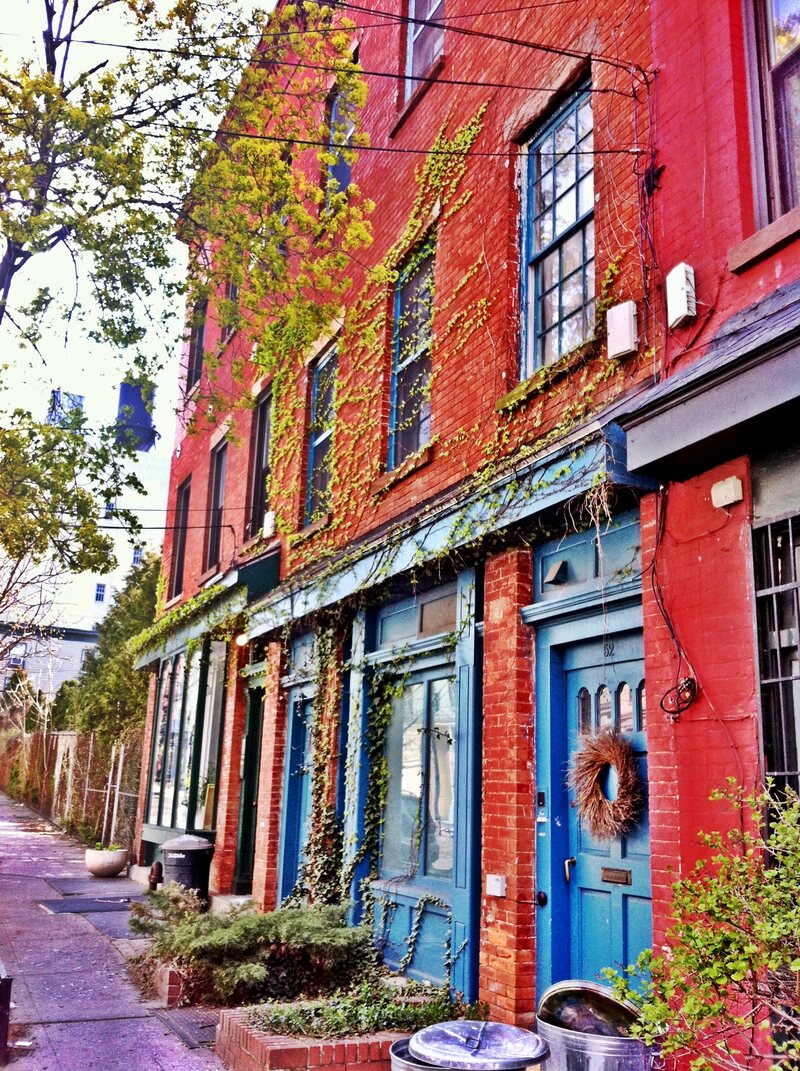 The Vinegar Hill of the past saw a much more bustling and diverse economy than that of today. Everything ranging from grocery stores to cigar shops was located in the neighborhood. Another key aspect of the economic life of Vinegar Hill was the factories — many of which are left still standing. It has to be noted that Vinegar Hill was at one point home to not only one, but also two, vinegar works.

While Vinegar Hill once experienced a decline, the recent birth of the Brooklyn Bridge Park now seems to be bringing in more and more people, including tourists. There is a notion for the park to expand north into Vinegar Hill so it seems we might see another commercial heyday for the area. Ask someone now about the small neighborhood and they’ll probably mention the popular Vinegar Hill House — a beautiful bistro offering new American cuisine at decent prices. In recent years, more and more coffee shops and like-minded bistros have opened up in the area, partly as a spillover from the flourishing DUMBO neighborhood. 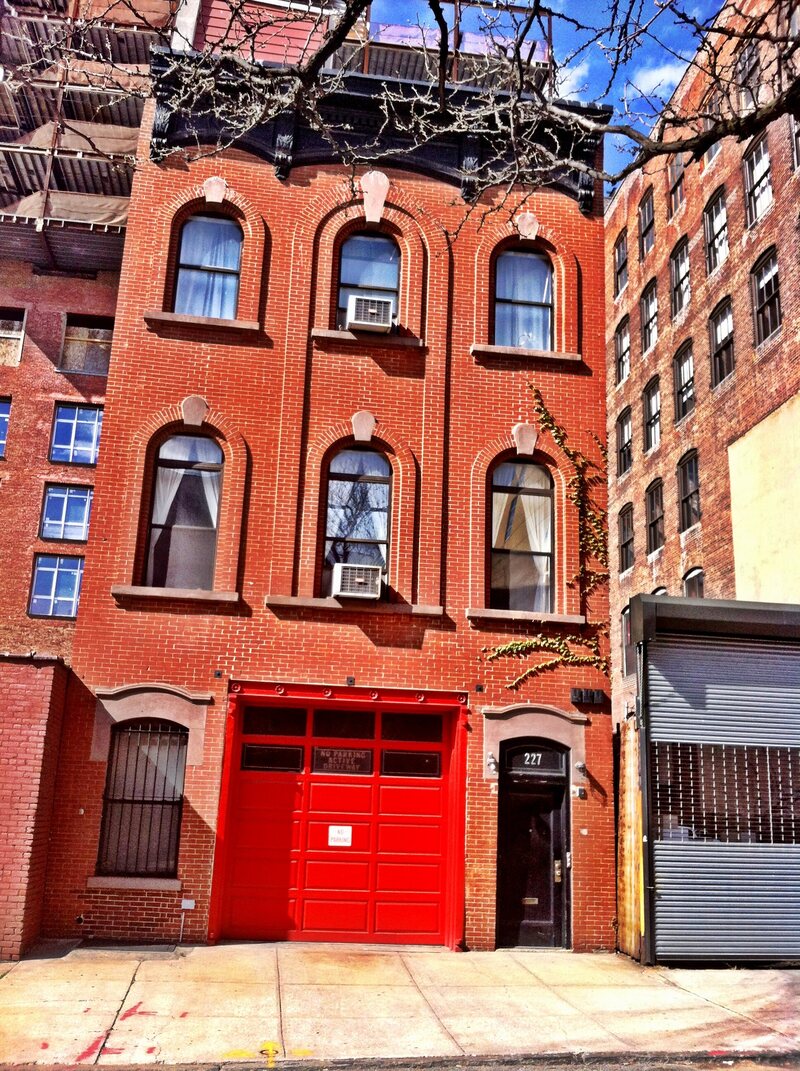 Walking through the neighborhood today, you’ll stumble upon funny little “community boards” with flyers from 2009 marking someone’s obscure art show, an elegant mansion set behind tall iron gates that was once in possession of the Navy for its captains, and a yellow Buddhist temple bedecked with barbed wire. While the retail offerings may be few now, Vinegar Hill is home to a vast collection of Japanese antiques housed in the expansive store called Shibui. The store is owned by the knowledgeable and friendly Dane Owen, who handpicks every piece on trips to Japan.

Vinegar Hill is a neighborhood rich in history, and well on its way for a second coming of development. The rich housing stock, narrow cobbled streets, and tree-lined sidewalks are the recipe for perfect urbanism. While the area remains somewhat obscured in DUMBO’s shadow, it seems the time is right for a renaissance of sorts. Vinegar Hill is one of those neighborhoods that allows you to escape the city without actually leaving it.

Curious Fact of the Week: Garden of Cosmic Speculation