A Franken-Forest of Fruit Trees Is Growing on Governors Island - Gastro Obscura
Want to see fewer ads? Become a Member. 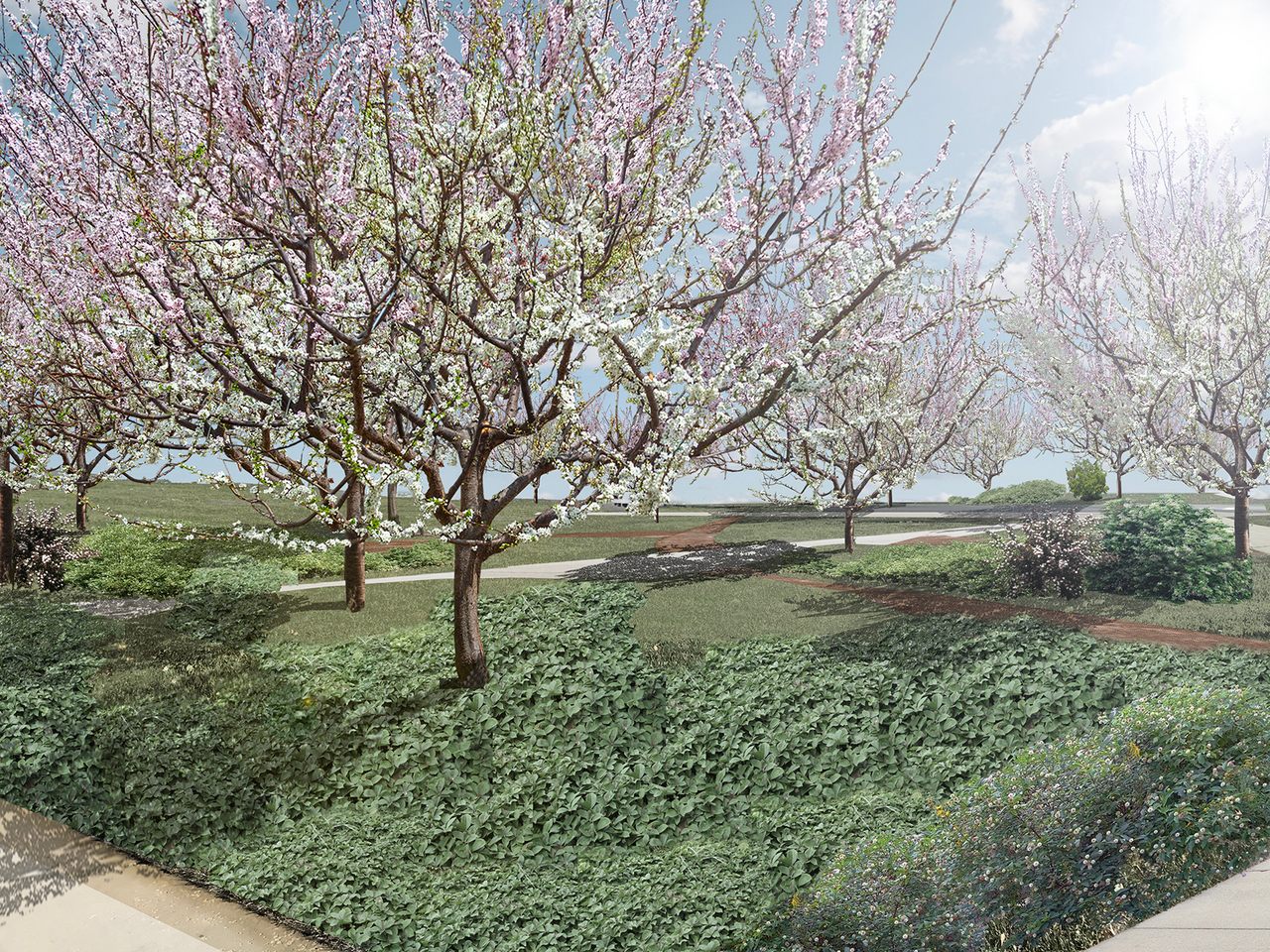 An artist rendering of the Open Orchard on Governor's Island. Courtesy of Sam Van Aken Studio
In This Story
Place

A Frankenstein blend of science and art allows one tree to produce 40 different types of stone fruit.
Destination Guide

On Governors Island, just a five-minute ferry ride from Manhattan, art professor Sam Van Aken plots his fantasy orchard. He plans on opening a public park with 50 blossoming trees that bloom into a mosaic of pinks, reds, purples, and whites. Come summer and fall, after the flowers have faded, visitors will be able to leisurely pick among 200 rare varieties of peaches, plums, apricots, cherries, and apples.

Van Aken is a master at grafting, an agricultural practice that involves transplanting one type of tree stem onto another, forming a sort of arboreal chimera. For his most well-known project, his “Tree of 40 Fruit,” Van Aken gathered rare varieties of stone fruit and grafted 40 different cultivars onto a single tree in Syracuse, New York. Now, he wants to open an entire orchard of these fantastical fruit trees. Van Aken hopes his Open Orchard will be both a breathtaking art installation and a living library that documents New York’s lost agricultural history.

“I think it’s a great way to maintain diversity,” says Amit Dhingra, a professor of horticulture at Washington State University who works in rare-fruit conservation. On top of the novelty for the public, a repository of fruit genetics can help scientists like Dhingra learn more about disease resistance or hardiness in the face of climate change. “These types of projects should be planted wherever they can,” he says. “I’m envious that we don’t have one in my own town.”

Van Aken’s fervor for multi-graft trees can be traced back to an interest in hoaxes. As a conceptual artist, much of Van Aken’s work has toyed with ideas surrounding illusion. He learned that the term hoax comes from hocus pocus, which in turn may originate from the Catholic liturgy “hoc est corpus meum,” a phrase used when bread and wine are transformed into the body of Christ.

“I thought that was a pretty interesting concept—where the appearance of a thing could remain the same while its reality changed,” says Van Aken. He began thinking about everyday objects that could be transformed into the unexpected and envisioned a tree that would look like any other during the winter, but come spring, would erupt into an array of different colored blossoms. He chose the number 40 because in Western religions it often represents a “number beyond counting.”

To create his colorful Tree of 40 Fruit, Van Aken first needed to hone his skills at grafting. Having grown up on a farm, he was familiar with the technique. “My great grandfather made a living grafting trees,” he explains. “Everybody talked about him like he was a magician.”

The process involves inserting a cut tree stem into a matching incision on an established root stock. If all goes well, the vascular systems of the tree and stem conjoin, and the two varieties grow as if they are one.

“The majority of trees—not even just fruit trees—are actually grafted now,” says Deanna Curtis, curator of woody plants at the New York Botanical Garden. Fruit trees such as apples, stone fruits, pears, and citrus have seeds that are genetically distinct from the parent, so the fruit they bear will have a different taste. Grafting ensures that the same fruit can be grown over and over again.

Curtis has heard of people making multi-graft trees with three or four varieties as a novelty before, but nothing remotely close to 40. And while making a single graft on a tree isn’t complicated per se, having 40 different varieties growing on a single tree means years of research, planning, and experimentation.

“You have to know what varieties are compatible,” says Van Aken, “but what it really comes down to is timing.” The grafting needs to be done just as the tree’s vessels begin flowing again in the beginning of spring, and it can take two years before it’s apparent that the stems have conjoined. “You can have a graft that takes, but it doesn’t bear fruit,” says Van Aken. “That’s probably the greatest skill: patience.”

While making a multi-graft tree with three or four varieties can be done in a single year, the Tree of 40 Fruit took five years and was completed in 2015. Since then, Van Aken has created around 20 other sites across the United States that bloom into a palatable pastiche every summer. For each site, he researches varieties that were historically grown in the region and sources the grafts from local growers, so each tree serves as a sort of horticultural ledger.

These years of practice, patience, and planning weren’t the only challenge. When Van Aken first embarked on the Tree of 40 Fruit project, he also ran into difficulty finding 40 different stone-fruit varieties that were historically grown in New York—a surprise to him since 2,000 varieties of peaches and nearly 2,000 types of plums were once grown across the United States. But swathes of these were lost when highway infrastructure paved the road for industrial production of fruit in the 1950s. Only the fruit most compatible with mass production, long-distance shipping, and shelf life could be sold in grocery stores, leaving other varieties—many healthier or tastier than their commercial cousins—to peter away into obscurity.

Learning about the plight of the heirlooms and tasting the fanciful fruit got Van Aken “in deep” with conservation. That’s why he collaborates with local growers to try and restock some of these dwindling cultivars.

“I have some that are favorites for taste and others that are favorites because of stories,” he says. The finicky green Gage plum, which Van Aken can only get fruit from about once every three years, is “really crazy … you bite into it, and there’s a bouquet.” Another plum, the Washington Gage plum, has a host of competing origin stories, but Van Aken’s favorite is that an old green Gage tree was struck by lightning and the roots “shot up another sucker.” The resulting tree produced a new variety with “amazing fruit” that was popular across the East Coast before falling out of the mainstream in the 1800s.

Now, Van Aken plans on leveling up the conservation crusade. “I was like ‘Oh, I’m going to set out to preserve all of them,’” he says, but recognized the task was probably too ambitious for just one person. That’s when he realized he could rally the help of the public while sharing his blossoming bounty.

He got the idea to create an Open Orchard, a public park that would double as a gene bank for the endangered fruit varieties. He began asking around New York City if anyone had acreage to spare, and finally got lucky with Governor’s Island. On the 172-acre island, Van Aken currently has a nursery of 300 trees, each grafted with four fruit varieties. He plans on sharing 250 of them with community gardens around the city, while 50 will stay to populate his Open Orchard.

The orchard hosts workshops on grafting and conservation (currently done virtually due to the coronavirus), and Van Aken anticipates the trees will bear fruit next summer. The summer after that, members of the public will be able to pick the low hanging fruit while orchard staff harvest the rest. Van Aken has also collected historic recipes and plans to give some of the harvested fruit to local chefs who will recreate vintage recipes. “I really just want people to taste the fruit,” he says.

How an Agoraphobic Traveler Wanders the Earth

Kalimullah Khan was inspired by a crossbred rose bush.
art

The Artist Who Plays With Her Food