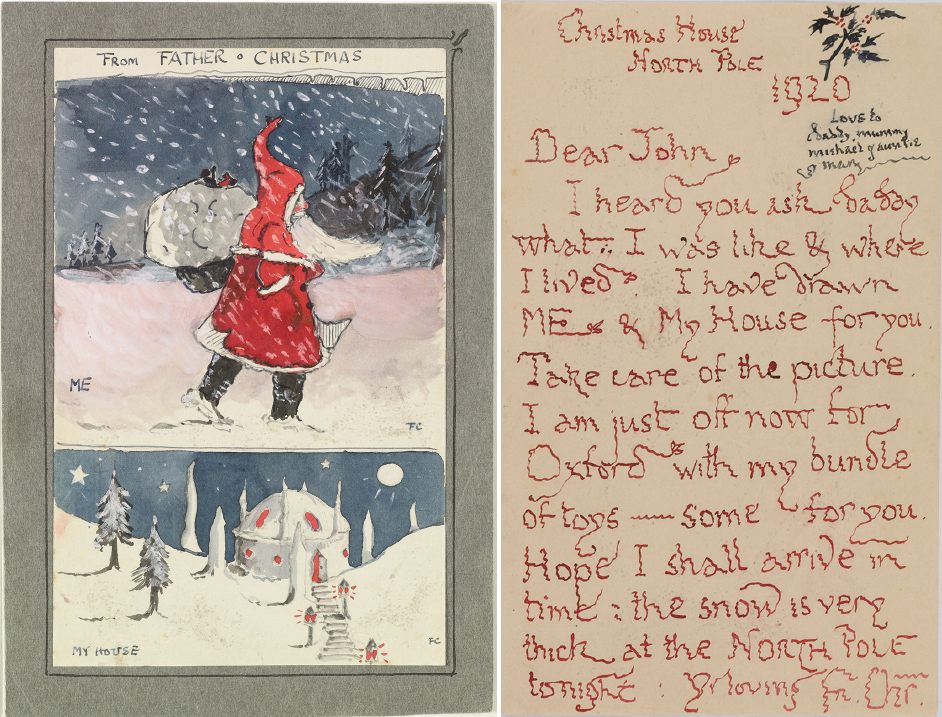 The first letter from Father Christmas, 1920. © The Tolkien Estate Ltd 1976
In This Story
Place

The Eagle and Child

J.R.R Tolkien, C.S. Lewis, and other "Inklings" met at the Oxford pub to discuss the now legendary fantasy stories they were writing.
Destination Guide

On December 24, 1920, J.R.R. Tolkien sat down in his study and wrote a letter to his three-year-old son, John, who had recently asked about Father Christmas. In spidery handwriting, in red ink, Tolkien replied as Father Christmas (the English folkloric figure now widely equated with Santa Claus), addressed from “Christmas House, North Pole.”

The accompanying picture that he drew is charmingly Tolkien-esque. A red-coated figure with a long white beard and a rosy red nose walks through the snow. His dome-shaped house glows from a wintery hillside, at the end of a staircase lit with lanterns.

For the next 23 years, every Christmas Eve, Tolkien wrote a letter to his four children from Father Christmas. What began as short, informative letters—“I am just now off to Oxford with a bundle of toys”—evolved into longer tales about life at the North Pole. The 1932 letter begins, “Dear Children, There is alot to tell you. First of all a Merry Christmas! But there have been lots of adventures you will want to hear about. It all began with the funny noises underground … ”

What follows is a tale of a beloved polar bear, mysterious caves filled with goblins, and their heroic counterparts, the Red Gnomes. As with The Hobbit, which Tolkien wrote and published in this period, the letters contain entire worlds, with invented languages and histories, alongside detailed illustrations.

Even the methods of delivery for the letters were as authentic as possible. They were presented to his children in envelopes with North Pole postage stamps—two kisses per letter—and later Tolkien persuaded the postman to include them in his mail deliveries.

Next year, you will be able to see these letters at Oxford’s Bodleiean Libraries exhibition Tolkien: The Maker of Middle-Earth, along with a trove of other Tolkien artifacts. Atlas Obscura has some images of the letters, which will be on view from June 1 through to October 28, 2018.

A diplomat, a scientist, and a farmer tamed the blazing red plant into a commercial juggernaut.
tolkienchristmasholidaysvisualphotography

After Being Abandoned, This French Beach Resort Was Adopted by Artists

The ghost village of Pirou-Plage in Normandy was reclaimed in the 2000s.
Want to see fewer ads? Become a Member.
From Around the Web
THE GASTRO OBSCURA BOOK
Taste the World!
An eye-opening journey through the history, culture, and places of the culinary world. Order Now