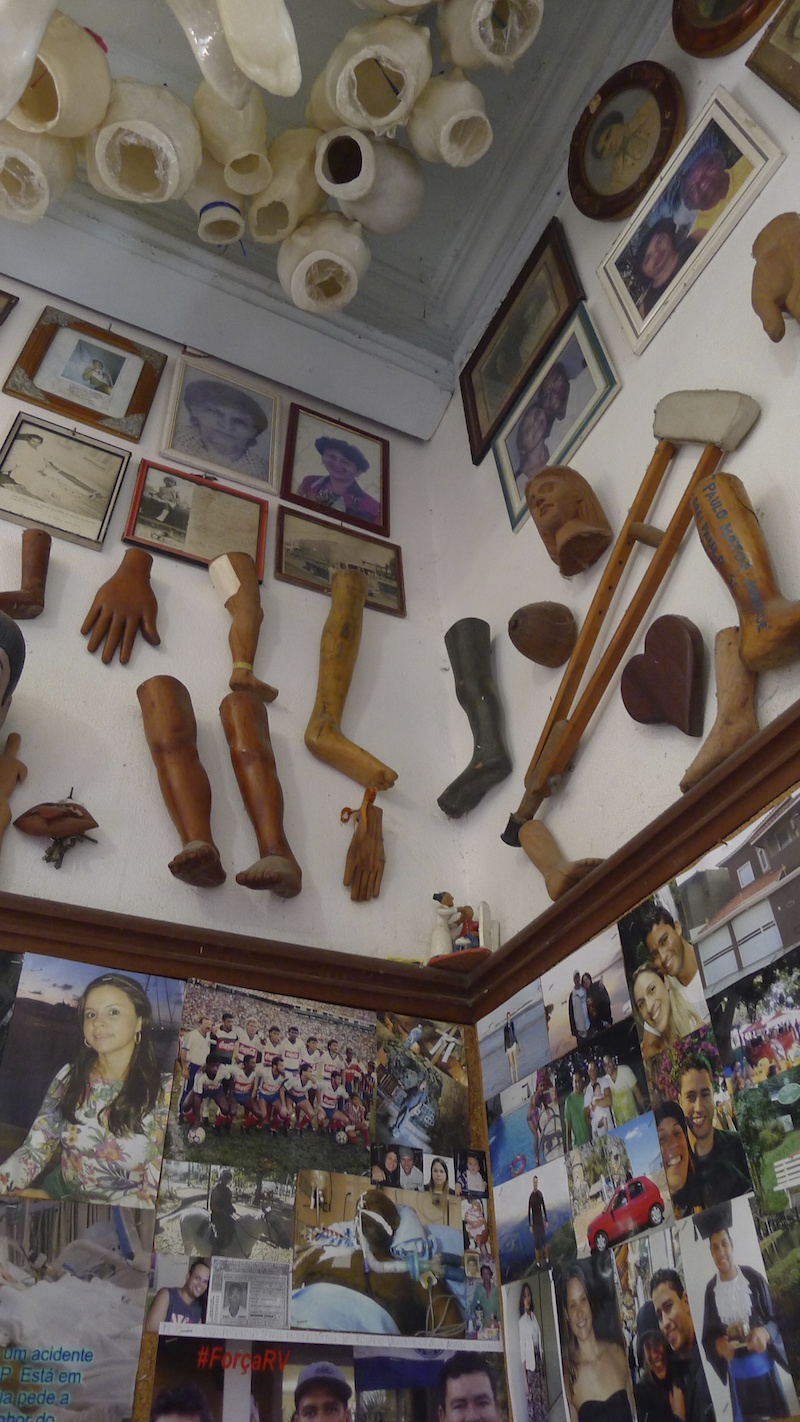 Wooden ex voto and photos that line the walls of the room. (Photo: Sarah Odedina.)

The Brazilian city of Salvador has reputably 365 churches, one for each day of the year. All are world heritage sites—their tiles from 17th century Portugal, their walls painted with gold, their architects masters of the baroque but Igreja Nossa Senhor Do Bonfim is perhaps the most special.   Inside the simple, white-walled structure, the faithful can be bestowed with healings and blessings—with a particular kind of religious artifact, the ex-voto. 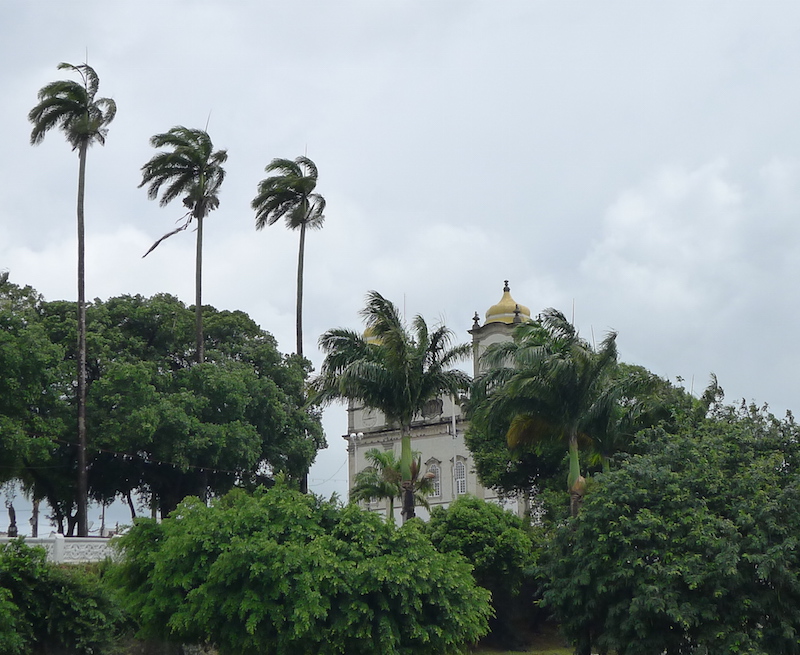 Igreja Nossa Senhor do Bonfim, Salvador, Brasil as seen during the approach to the church. (Photo: Sarah Odedina.)

The church itself was begun in 1745 and finished being built in 1772 . The main room is typically packed, as many travelers come to worship, but it is in a room to the left of the nave that the unique nature of the church becomes clear. 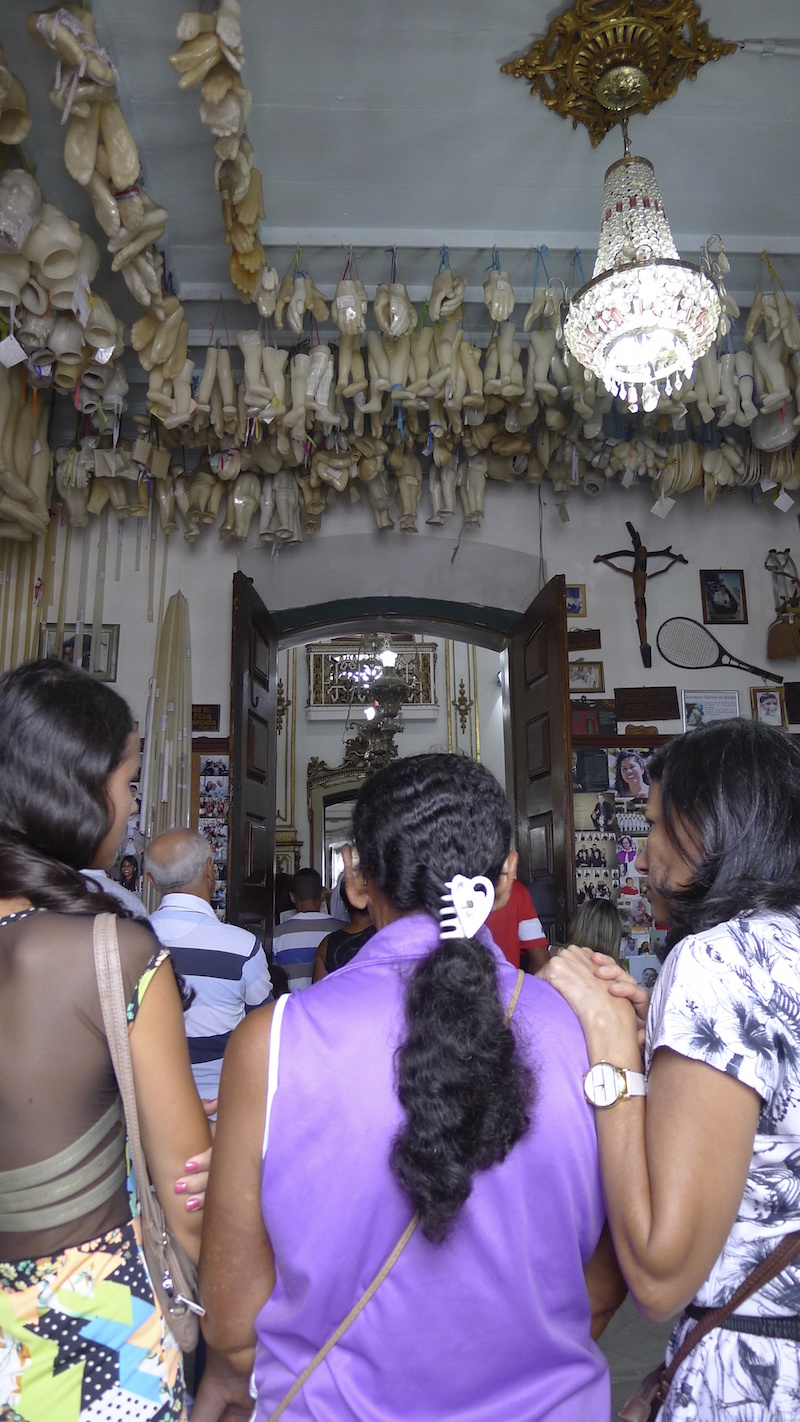 Worshippers watching a Sunday service in the main church from the ex voto room. (Photo by Sarah Odedina.)

In this small room the walls, ceilings, and even parts of the floor are covered in ex-voto.  Ex-voto are tokens left by people praying for recovery from illness, safe return of loved ones from wars, healthy delivery of a longed for child or people giving thanks for a kidney transplant, miraculous survival of a car accident, the good fortune for buying their first house or opening a business. And the ex-voto are bold and clear statements: Photographs of children before and after tumor removal, wax or wooden effigy’s of breasts and kidneys, legs and arms, a football shirt, or photo of the epaulettes someone received on promotion in the military police, and a letter imploring for success in exams. 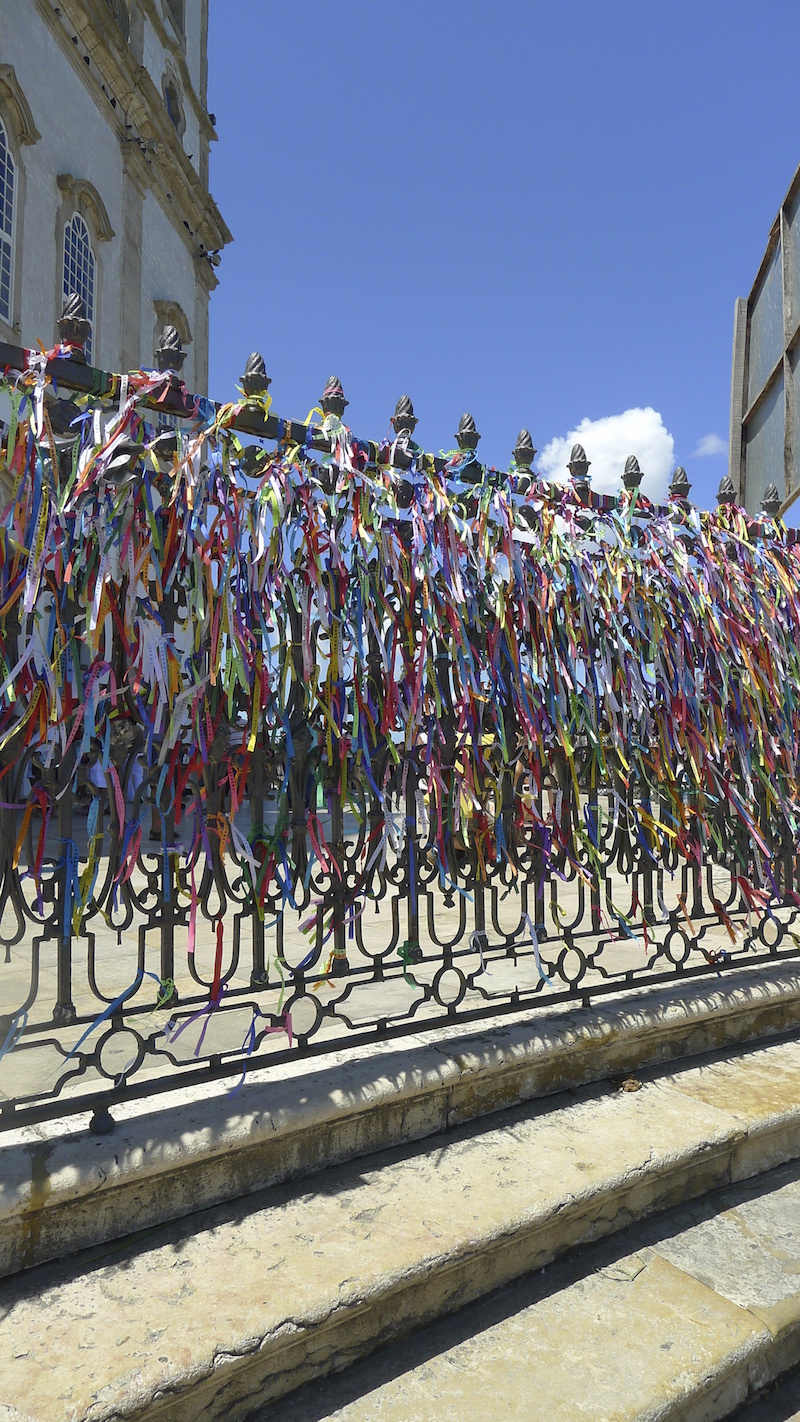 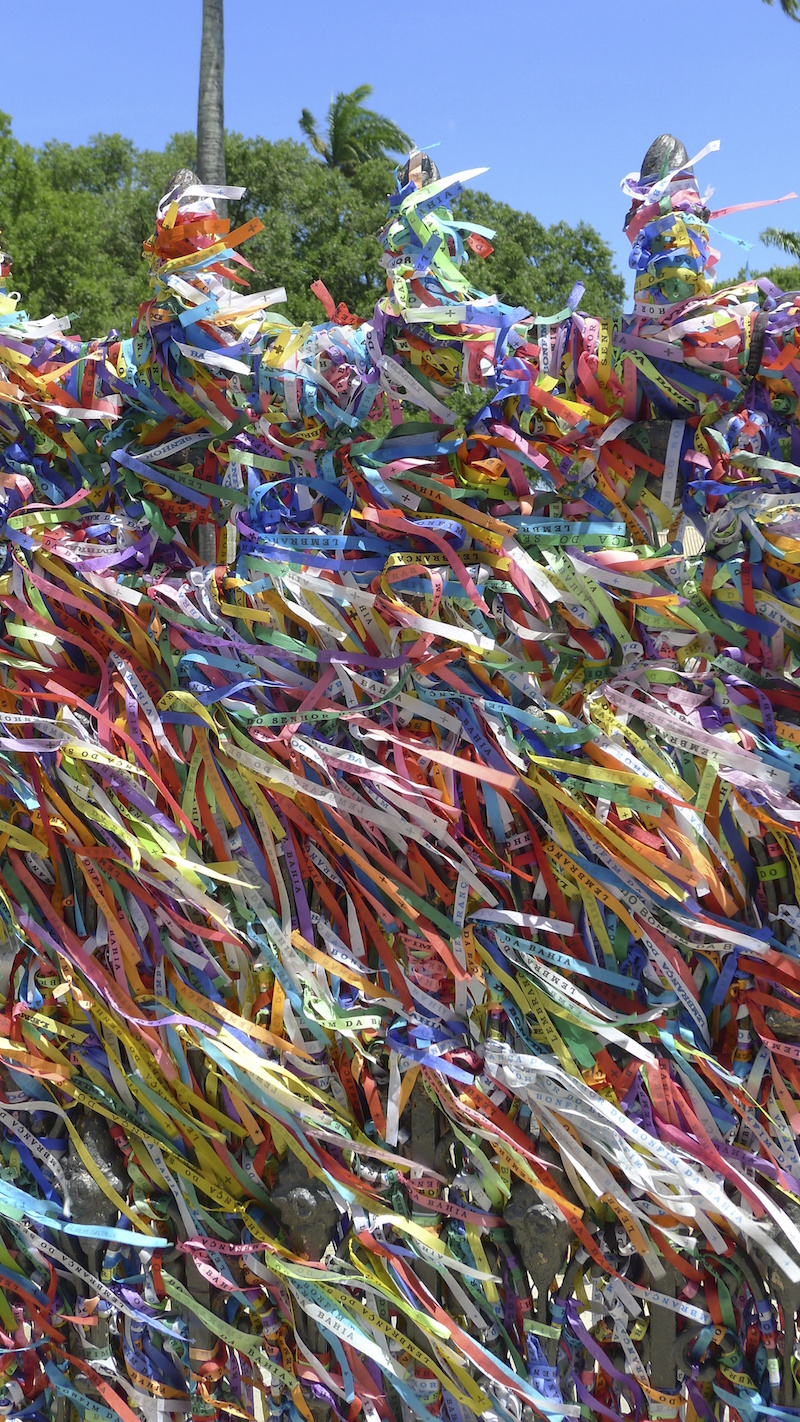 Fita de Lembranca are ribbons that are tied to the railings outside the church marking prayers made by visitors. (Photo: Sarah Odedina.)

Each day the number of objects changes; some removed and replaced by others more pressing or more present. The feeling in the room is emotional, as sobs are often heard echoing through the space.

This tradition dates back centuries. Upstairs in the church is a museum with ex-voto over the ages—paintings of ships wrecked on rocks painted by a lone survivor, a bullet and a dented coin placed in the church by someone who survived death at the hands of a robber, kidney stones preserved after an operation and brought to the church to demonstrate thanks,  spectacles, and crutches abandoned following miraculous cures, naval caps line the wall on the way up the stairs marking promotions and the shirts from players in different Brazilian world cup winning teams. 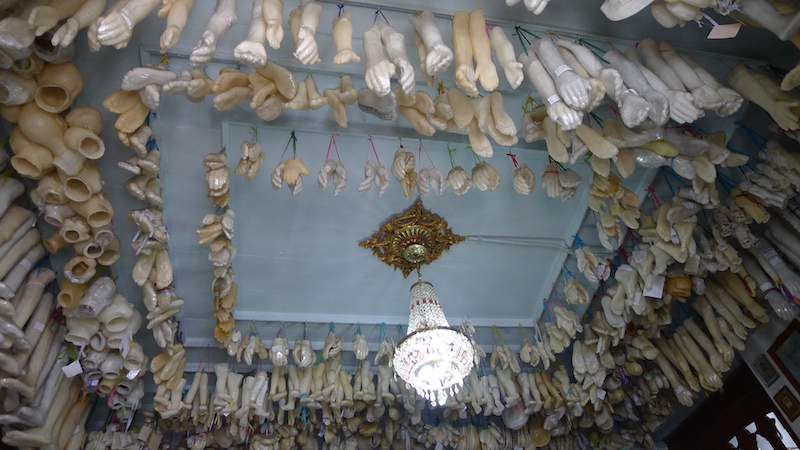 Wax ex-voto hanging from the ceiling of the small room. (Photo: Sarah Odedina.)

And if the ex-voto practice isn’t enough of an expression of gratitude, the church has another fascinating tradition. On the Thursday before the third Sunday in January each year ,the faithful of the Candomble religion, with tens of thousands of revelers, walk the six kilometers from the lower city in the centre of Salvador to the Bonfim church and wash the steps in thanks and devotion to Oxala, a local god.  The practice is said to have been started by a devotee who vowed to wash the entire church each year in gratitude for surviving the war with Paraguay that ended in 1870; others began to join the practice in thanks for the blessings that they too had enjoyed during the past year.

Soon the annual thanks giving had been adopted by worshippers of Candomble and in 1889 the then Bishop banned the supplicants from entering the church and since then the washing has involved only the front steps of the church and followers of Candomble who worship at the church in respect of Oxala continue to do so outside, not entering but drawn by its power nonetheless.

Places You Can No Longer Go: Tannenburg Memorial

Only the Vatican Has More Christian Relics Than Pittsburgh

St. Anthony’s chapel is home to some 5,000 important relics.
relics

Elizabeth of Aragon's incorrupt appendage is temporarily on view in Portugal.
churches

This intricately carved church is one of Norway’s great treasures of architecture.
Video