The Greatest Teen Job in the World Might Be Reopening Italian Catacombs - Atlas Obscura
Want to see fewer ads? Become a Member. 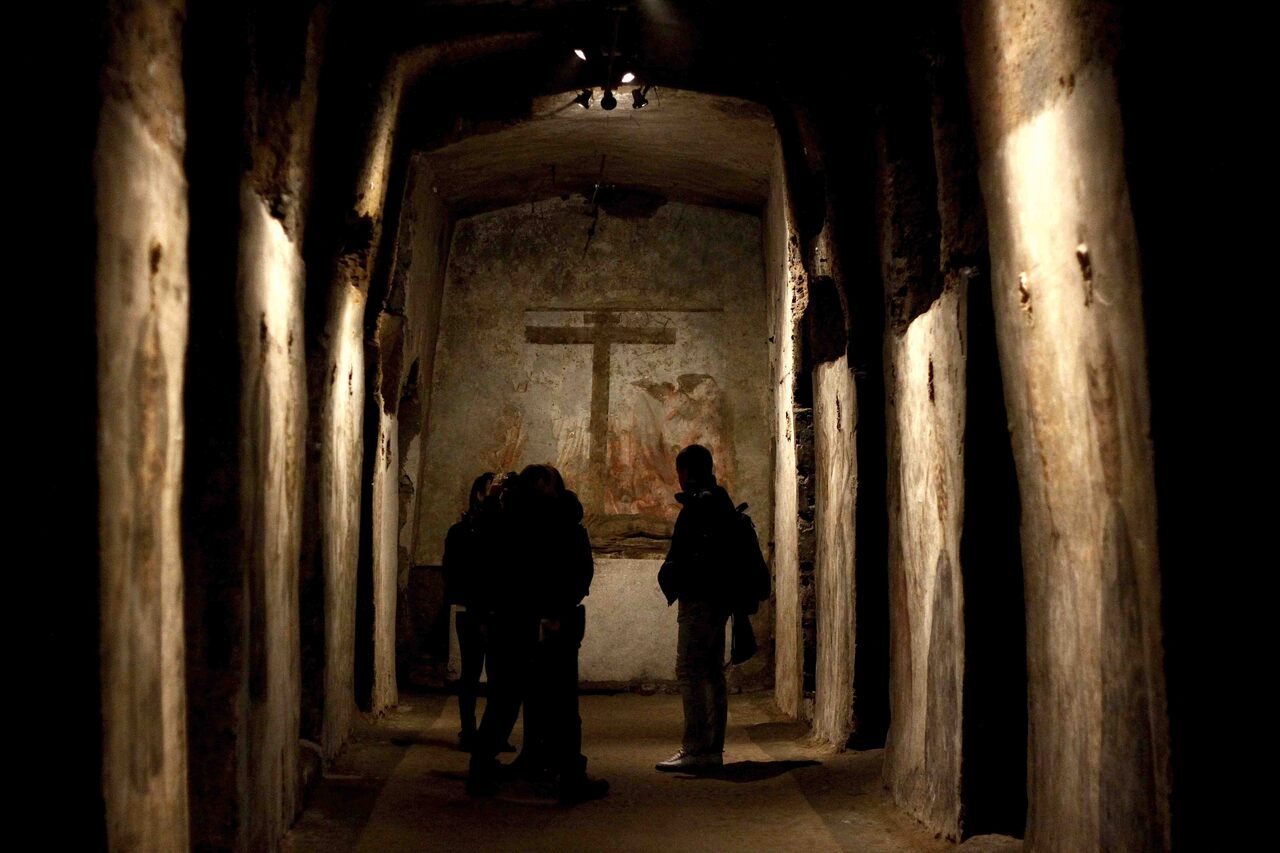 Tourists in the Catacombs of San Gaudioso. All photos: La Paranza Cooperative

Walking through the Catacombs of San Gaudioso is a study in intergenerational cooperation. As you enter, you’re greeted by a fifth century fresco of the Apostle Peter, his hands clearly beckoning you in, his entire head effaced by time. Minutes later, you’re face-to-face with the skull of an 18th century nobleman, stuck in the wall over a portrait of its previous owner.

Above you, through the stone ceilings, cars rumble through the streets of modern-day Rione Sanità, a neighborhood smack in the middle of Naples that is caught in the claws of a global recession. And in front of you, explaining all of this, is an enthusiastic Neapolitan teen—the only reason you get to go down here in the first place.

These teen tour guides are members of La Paranza Cooperative—a group of young locals united by their desire to help their city and their love of the catacombs, which they reopened to the public. “The silence, the smell, and the history, it gives you this feeling,” says Vincenzo Porzio, the organization’s communications operator. “It’s like traveling back in time.”

Porzio and four of his friends started La Paranza Cooperative ten years ago, for two reasons. First, their community was hurting. The recession hit southern Italy hard: about a fifth of citizens are unemployed, and for young people, the statistic rises to 75 percent. Without employment prospects, many of Porzio’s peers have trouble envisioning a future for themselves. Some flee to Berlin and London. Others end up joining the mafia, which has used this disillusionment to swell its ranks.

Thanks to centuries of biased urban planning, Rione Sanità is even worse off than your average district. Back in the 17th century, Porzio explains, Neapolitan nobles would travel down into the Rione Sanità valley on their way from the center of Naples to the Royal Palace in Capodimonte, on the city’s northern edge.

This route was popular, but indirect, and the diplomats eventually funded a bridge that linked the center and the palace directly. This cut down on travel time for the royal family, but completely isolated Rione Sanità. At that point, the district “started to become like a ghetto,” and never stopped, says Porzio.

This gave Porzio and his friends another impetus: “We needed to see our cultural heritage valorized,” he says. Rione Sanità is literally full of history, as the city sits on top of nine different catacombs and ossuaries, carved into the earth over centuries. The ancient Romans webbed the sides of the valley with tunnels, which they used to store water. In 452 AD, when the bishop St. Gaudiosus died in Naples, he was buried in the tunnels. Fifth-century tourists flocked to his gravesite, and the ancient infrastructure became an underground cemetery—the Catacombs of San Gaudioso.

The entrance to the catacombs lies under the altar of the Basilica of Santa Maria della Sanita, itself a marvel of baroque architecture, full of sun-drenched marble and topped with a green and yellow ceramic dome. Here was a portal to another time, sitting unused inside the city’s most beautiful building. If people had been literally driving over Rione Sanità, maybe this could make them slow down.

After what another founding member called “some pretty serious negotiations” with the Vatican, which is in charge of Catholic relics, the five teenagers linked up with a local priest, raised seed money from local donors, and began leading tours of the catacombs. “We didn’t wait for the public administration,” says Porzio. “We worked by ourselves.”

Fast forward ten years, and La Paranza Cooperative is a thriving, economically sustainable business. The five volunteers are now 20 paid employees, and they lead 70,000 visitors on catacomb tours every year—visitors who then patronize other local hotels, shops, and restaurants.

“We have met really nice people,” says Porzio. Some of these people turned out to be local archeologists, who are helping them open more and more catacombs, and keep the art and bones inside safe for future generations. Others were electricians and engineers—the tunnels are now lit with LEDs, and several of them are handicapped-accessible. “Between frescos, mosaics, and places you can walk in now, we have restored 10,522 square meters of cultural heritage,” says Porzio.

La Paranza does a lot of work aboveground too. They have part ownership in two bed and breakfasts—one a transformed convent, the other a rehabilitated monastery, naturally. They spurred the creation of a youth orchestra, a theater company, and two “homework houses.” On weekends, they lead longer tours through the whole city, dipping in and out of historic churches, down into the catacombs, and then back up into the streets where all of their work got started. It’s a lot of logistics for a Sunday, but Porzio doesn’t mind. “It’s a job which we don’t actually call a job,” says Porzio. “We’re working for the image of our city.”

Watch the Devil's Fingers Rising From the Underworld

In the 1800s, farmers cultivated mushrooms in abandoned quarries underneath the French capital.
cemeteries

The history of the rural cemetery movement, which brought Victorians to picnic among tombstones.
haunted

When the Jersey Shore Was the Epicenter for Haunted Attractions

In the 70s and 80s, beachgoers delighted in low-budget frights.
literature