The Goose Who Wore Nikes, and the Mystery of Who Murdered Him - Atlas Obscura 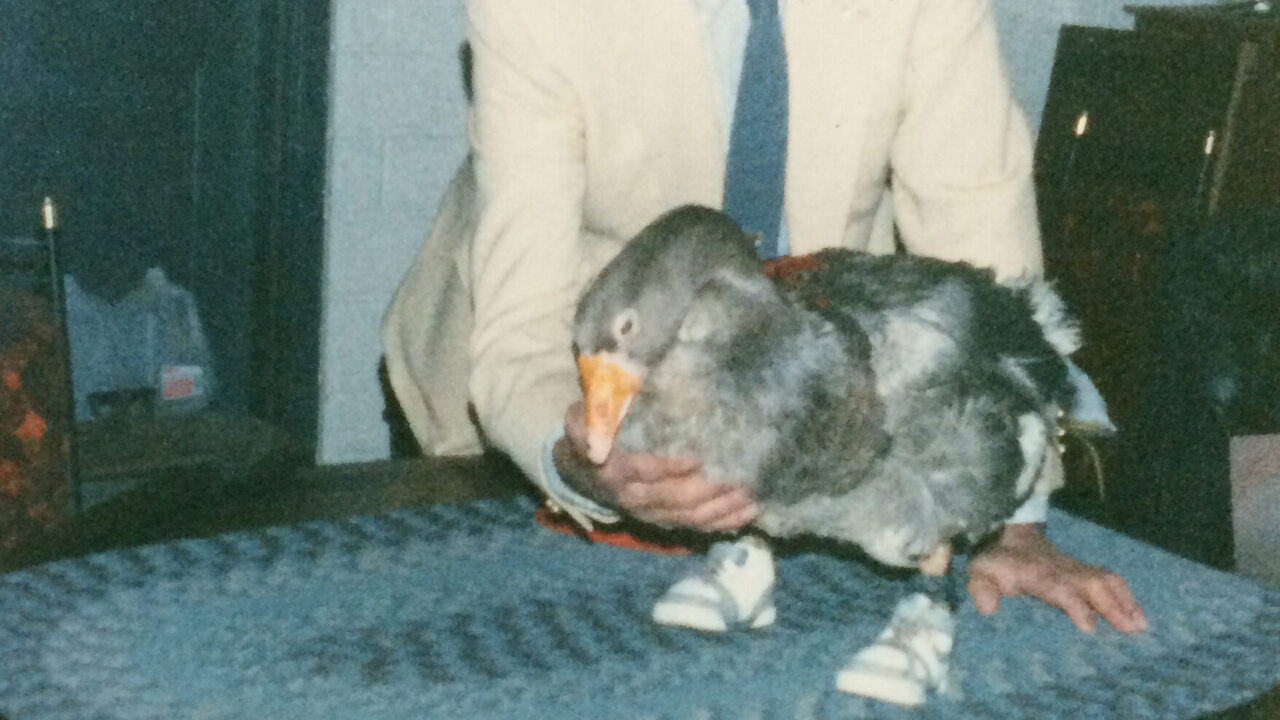 Jessica Fleming was 12 years old when she met the goose who would change her life. She was living with her parents and grandparents at a former naval ammunitions depot in the small city of Hastings, Nebraska, and she never quite knew what would be going on there when she returned from school. “I got home after a brutal day of junior high,” she says. “I looked out the window, and I could see my grandpa holding a leash. So I walked out to see what he was up to, because he was always up to something.”

Jessica’s grandpa, Gene Fleming, was an inveterate tinkerer. He had made his fortune in manufacturing, and it was he who had transformed the ammunition depot into apartments, complete with a rec room and chicken hutches. A few days before that fateful day in 1988, he had been visiting his sister-in-law’s farm when he saw something that got his heartstrings tugging and his wheels turning: a two-year-old goose who had been born with no feet, struggling to follow his fellow geese across a gravel road.

“Because I’m a Shriner,” Gene later told People magazine, “my natural instinct was to help him.” First, he tried making a fowl-sized skateboard, figuring the goose the could push along with one stump while balancing on the other, but no dice. The goose was patient, though, and Gene soon hit on a solution: a pair of patent leather baby shoes, size 0 and stuffed with foam rubber. By the time Jessica got home from school, the goose was running pell-mell around the yard, tugging at the other end of the leash. Soon, they were calling him Andy.

At the time, Jessica wasn’t necessarily impressed. “I was at the age of being constantly embarrassed by my family,” she says. She couldn’t have predicted Andy’s meteoric rise and devastating fall—that the Footless Goose would become first an international superstar, then the victim of a brutal murder, then the subject of a mysterious cover-up. She couldn’t have known that 25 years later, she would be the Fleming who took up the mantle, fighting through a web of mystery and intrigue to bring Andy justice.

Twelve-year-old Jessica may have been over Andy, but Gene’s friend at the Hastings Tribune, Gary Johansson, saw the goose’s potential. He wrote up a few lines, and almost overnight, Andy went 1980s-viral. “We had newspapers from all over the world contacting us and wanting to do stories,” says Jessica. He got on The Tonight Show with Johnny Carson, where he shared billing with Isabella Rossellini and Martin Short. Reader’s Digest did a profile, and People splurged on a photo spread. When Nike learned that Andy preferred their brand of baby shoes, they sent him a crate, making him almost certainly the first goose to get a major sponsorship deal.

Andy’s hometown was quickly enamored, too. Gene gooseproofed the passenger seat of his bright orange Triumph TR7, and he and the star toured around, putting in appearances at libraries, schools, county fairs, and parades (they particularly liked speaking and honking at disability awareness events). Tourists flocked to see the Fleming homestead, and Gene even drummed up an Andy Fan Club, which issued official certificates signed by him and his wife, Nadine. “Hastings is known now for Kool-Aid,” says Fleming. “But before they really promoted that cause, it was Andy the Goose. It put the town on the map.”

Even beyond the shoes, Andy was a special goose. “He was very sweet-natured,” says Jessica. “Just literally a nice bird.” He seemed, she says, downright grateful to her grandfather—loyal to him despite the temptations of fame, and patient when he tried to switch out his Nikes for high-tops or to see if he could ride a bicycle. When Gene picked him up, Andy would nestle into the crook of his caretaker’s arm, his shoes dangling like a kid’s from a high chair. “He’s a one-man goose,” Gene told People.

But it couldn’t last. On October 19, 1991, Gene and Nadine got the kind of phone call every goose owner dreads. “Is Andy OK?” asked an anxious voice on the other end. A couple of Hastings residents had been out metal detecting in a local park, and had found a dead goose sporting telltale sneakers. The Flemings rushed out to the hutch. There were fresh footprints in the dirt, much bigger than size 0. Andy and his mate Paulie were nowhere to be found.

Andy’s killing was national news. A story about a community that rallies around a footless goose has almost everything—add a murder mystery, and you’ve got a truly all-American tale. Reporters pulled no punches, veering from grisly to maudlin in mere paragraphs. “He was found in a heap, decapitated and skinned, near the town baseball diamond,” wrote People, before quoting a local first-grader with spina bifida: “He was my favorite goose because he had no feet. Why’d they do it?” The case even made the tabloids. “SICKO COMMITS FOWL DEED!” screamed Weekly World News, alongside stories about penile enhancement and a woman who was convinced her Dalmatian was Clark Gable reincarnated (“I can just tell it’s Clark,” she said).

When it came down to it, though, Andy was a local goose. Long after the glitzy reporters left town, long after the tide of sympathy cards trickled to a stop, the people of Hastings kept pushing for answers. The Chamber of Commerce set up a reward fund, and raised somewhere around $10,000 (the previous record for a reward was $100). Reporter Ron Grossman of the Chicago Tribune returned to the town in June of 1993 to see how everyone was getting along. He quoted sheriff Gregg Magee saying “Andy’s case is still open,” and promising that his department followed up on every tip. “They were still feeling the shock of a murder,” Grossman remembered in an email.

Gene buried Andy quietly in his backyard, the site of their first romp together. “Not long after that, he started showing signs of Alzheimer’s,” says Jessica. “In retrospect, I think it was Andy who had kept him here with us for a lot longer.” Gene agitated for a bronze memorial, but it never came to pass—although a local granite company did donate a carved headstone, which sits at the old Fleming homestead to this day. Gene passed away in 2000, at a nursing home in Grand Island, Nebraska*. “He definitely did not get closure,” Jessica says.

A few years ago, though, Jessica Fleming, now Jessica Korgie, found herself thinking more and more about Andy. She began combing through her grandparents’ piles of documentation—fan mail, crime scene photos, her grandmother’s meticulously kept notebooks. She called around to key players. Intriguing inconsistencies began to emerge, particularly around the case’s status as “unsolved.” “Some people said that the [perpetrator] was found after so many years,” she says.

A recent call to former Chamber of Commerce president Don Reynolds confirmed this: “About two years [after the murder], someone from the sheriff’s department called and said, well, we found out who did it, but we can’t tell you, and we don’t want to have any news release about it,” he said over the phone yesterday. “We didn’t know what to do. Finally we donated the reward to our community foundation, which used it for kids’ projects.” The department, he said, had told him that Andy’s killer was “somebody that was not responsible”—suggesting that they were perhaps mentally disabled, or otherwise not in control of their actions. (Sheriff Magee did not respond to a request for comment.)

We can’t know for sure what Andy the Goose would have wanted, but it probably wasn’t to cast undue scrutiny or blame onto a disabled person. Jessica, who is working on a documentary about Andy’s life and death, agrees: “I’m not interested in the name of the person anymore,” she says. “I wouldn’t want retribution against the person or their family.”

Naturecultures is a weekly column that explores the changing relationships between humanity and wilder things. Have something you want covered (or uncovered)? Send tips to cara@atlasobscura.com.

* Correction: This story originally stated that Gene died in New York. He died in Nebraska.

Peek Inside the World's Most Strange and Morbid Collections

The Surprisingly Sticky Tale of the Hadza and the Honeyguide Bird

When The Western World Ran on Guano

A Twitter That Really Tweets, And Other Uses For 7,500 Hours Of Animal Sounds

To Decipher Peru’s Nazca Lines, Think Like an Ornithologist

Researchers believe the giant birds are more exotic than they seem.
Video

The "Mystery Man with 21 Faces" mocked the police ruthlessly and stocked Japan's supermarkets with cyanide-filled candy. To this day, no one knows who they were.
Read more
Thanks for sharing!