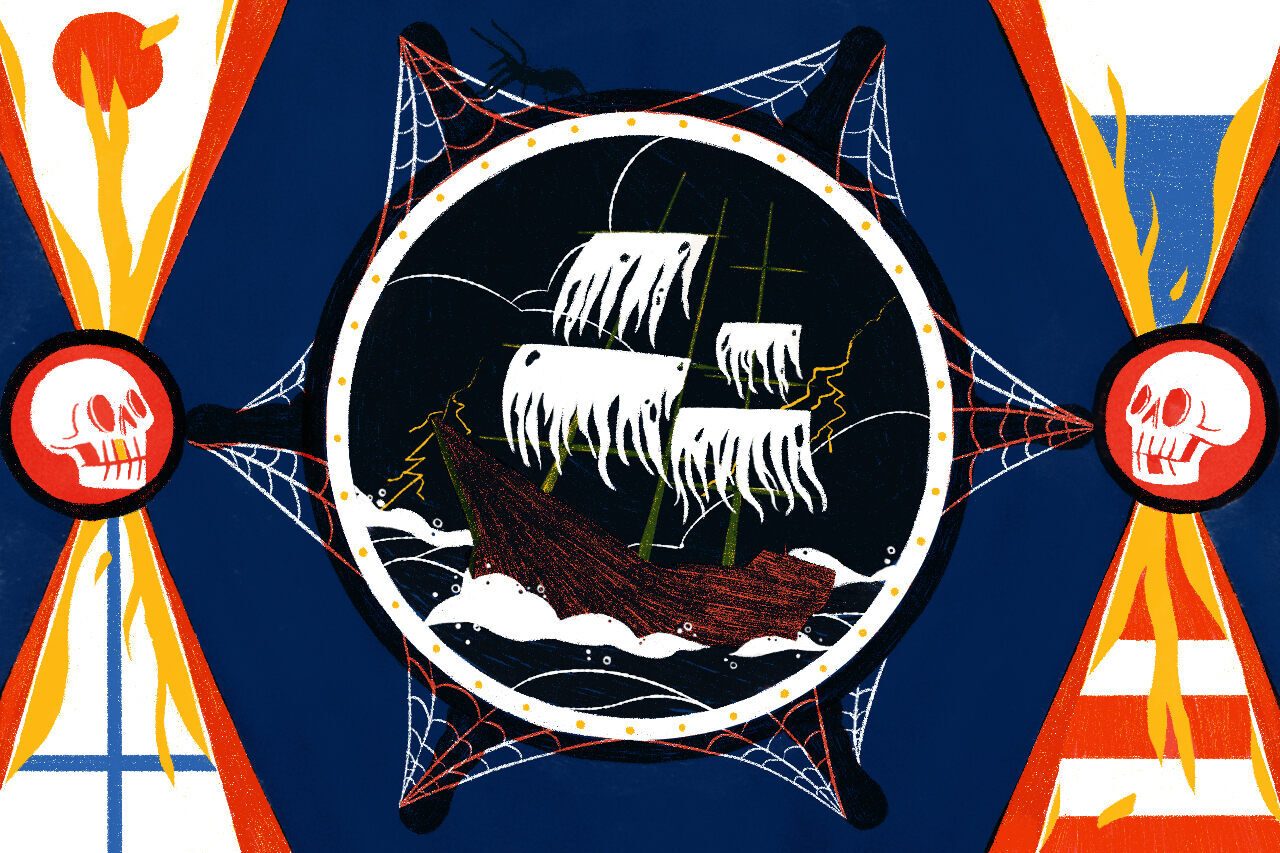 The spectral ship has a curious, centuries-old history. Carmen Deñó

Spirits Week
See More
This week, we’re looking at the ways that ghostly and ghastly tales evolve—shifting shape, but never quite dying out.

It’s said that not all who wander are lost, and that’s mostly true. Some are just damned for all eternity—like the crew of the Flying Dutchman, perhaps the most infamous ghost ship to haunt the seven seas.

But before it sailed all seven, serving as an omen of doom for any sailor who saw it, the Dutchman made its name off the coast of Africa—as an English creation dressed up in Dutch clothing, says Agnes Andeweg, a literature professor at University College Utrecht who specializes in Dutch literature and cultural memory.

“I have searched all digitally available Dutch texts published until 1800,” she says, “including a corpus of thousands of letters by seafarers, and there is no mention of the Flying Dutchman—ever. If it was a piece of lore, it was a British piece of lore.”

The ship’s story started spreading in the late 18th century, as the Dutch maritime empire collapsed and the Dutch East India Company dissolved. As some versions of the tale tell it, the Dutchman (De Vliegende Hollander in Dutch) transformed from corporeal to supernatural off the Cape of Good Hope (or Stormkaap)—a notoriously dangerous bend in the maritime route from the Netherlands to the occupied islands of the East Indies, now Indonesia.

Though the circumstances of the ghostly transformation vary—sometimes it’s ascribed to the slave trade, sometimes to murder, sometimes to a broken promise—most every story seems to agree that the ship is damned for all eternity, and that its crew must sail forever, never (or very, very rarely) making it to port.

In an academic paper titled “Manifestations of the Flying Dutchman: On Materializing Ghosts and (Not) Remembering the Colonial Past,” Andeweg chronicles the origins of the mythical ship, from its supposed roots in the Dutch maritime empire to its modern appearances in SpongeBob SquarePants and the Pirates of the Caribbean movies, where it’s captained by none other than Davy Jones, the old sailors’ devil (who manifests in the Pirates version as an anthropomorphic octopus-man).

In contrast to that convoluted reimagining, says Andeweg, the Dutchman’s invention by the British was pretty simple. The ship materialized in the written record just as Dutch naval supremacy was waning, and Britain’s was on the rise.

“This historical development is what makes the Flying Dutchman story relatable and comprehensible to a British audience,” Andeweg says. “The ghost makes sense because this audience understands that the [Dutch East India Company] has become something of the past.”

Many have claimed to see the Dutchman over the years (including Prince George of Wales, later King George V). But the majority of those supposed sightings can be easily explained away, most commonly by fata morgana—a mirage that can cause objects on the horizon to morph or hover, floating as so many ghosts are known to do.

“Sailors in the 18th and 19th centuries only had two explanations for the experience of seeing the Flying Dutchman: superstition or madness,” says Nic Compton, a maritime writer whose books include Off the Deep End: A History of Madness at Sea, via email. “Either it was a ‘ghost ship’ or you were mad if you thought you’d seen it. Nowadays we have a third explanation: science.”

As the British empire declined over the course of the 20th century, so too did the Dutchman’s fame. The ship that once inspired an opera by Richard Wagner and poems by Thomas Moore and Sir Walter Scott faded into relative obscurity before its recent revival in American movies, comics, and cartoons. Andeweg attributes this to two factors: reduced public interest in (and knowledge of) seafaring, and the end of the colonial era.

“We might say that the current relevance of the Flying Dutchman is limited,” writes Andeweg. “But I believe it can still be reactivated—as it was in the Pirates of the Caribbean [movies]. Its [cinematic] relevance may … show how ‘we’ apparently need to fictionalise or supernaturalise the colonial era.”

Its spirit culture is unlike any in the world.
legendary afterlivesspirits weekfolkloreshipscolonialismoceans

The Ghostly Japanese Fireball Spirits That Live On in Pokémon

The digital descendants of 'yōkai' can be spotted in many Japanese games.
ghosts

Ghost Nets Haunt the World's Oceans, Hunting Beyond the Grave

Who you gonna call?
monsters

The Many Lives of Demogorgon, From Scribal Error to 'Stranger Things'

How vague and various descriptions made a medieval mistake into a lasting horror.
Video • PinDrop

The Nain Rouge has been stirring up trouble—and maybe generating some goodwill—for more than 300 years.
Read more
Thanks for sharing!