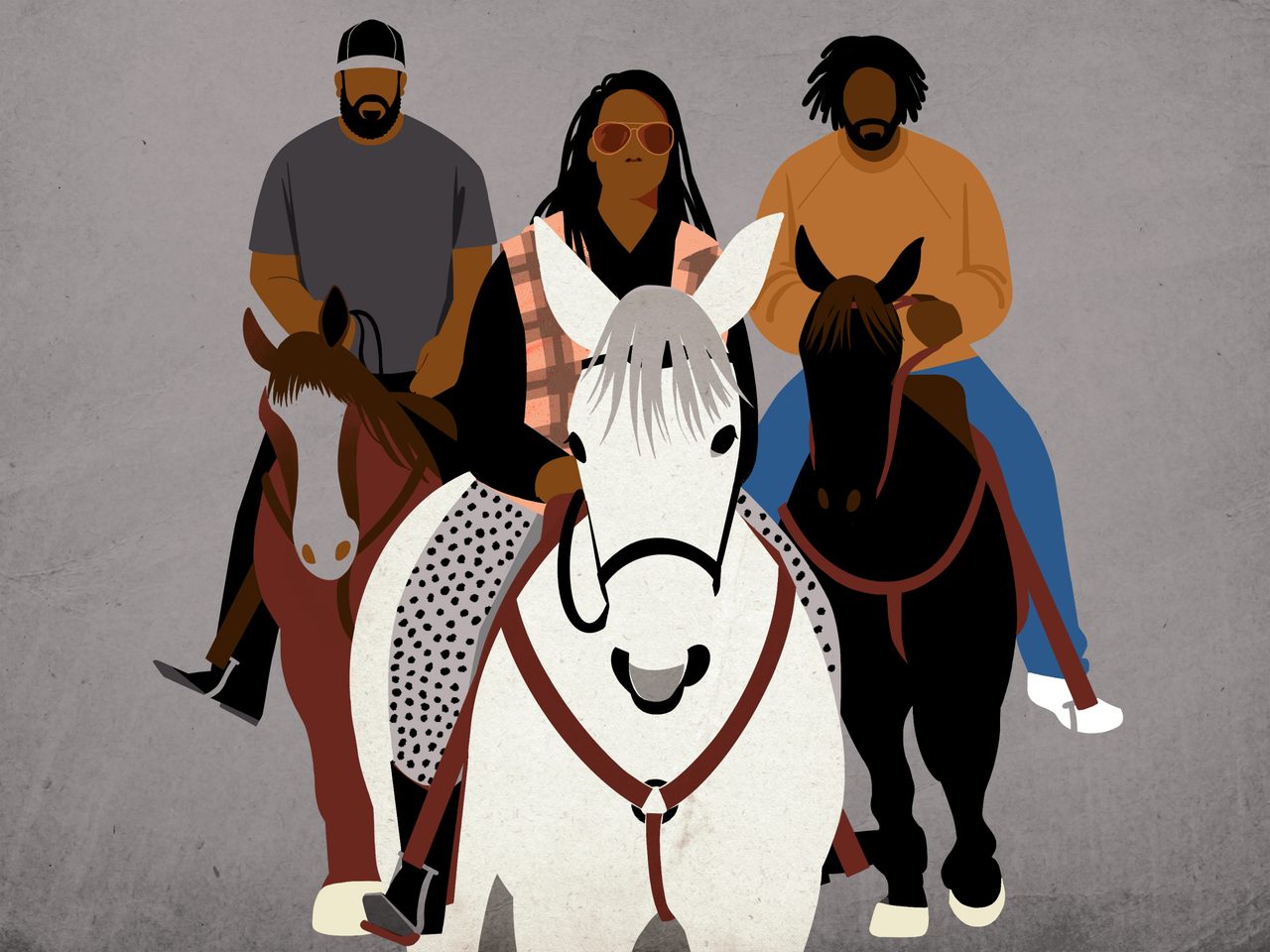 When Keiara Wade rides her horse, Penny, she thinks of her younger brother, who was murdered when he was 23. “My brother thought that being a man meant being in a gang,” she said.

Wade, who grew up in Compton, south of downtown Los Angeles, found solace at Richland Farms, a working horse ranch improbably nestled in the heart of the city. The ranch takes in horses that have been abandoned or abused.

“You feel just the way I feel,” Wade remembered thinking about the quarter horse she rides. “You hurt just the way that I hurt. You experience pain just how I experience pain.” Riding made the pain go away—for Wade and Penny both. “If I’m in a bad mood, if I pull up to the barn and try to ride her, she won’t be responsive to me if I’m not handling her correctly,” Wade said. “She’ll let me know, and she helps me have awareness of myself.”

In 2017, Wade became a pioneering member of the Compton Cowboys, a group of rogue horseback-riding friends committed to helping at-risk youth and reclaiming the value of their lives, their community and their heritage. The Cowboy’s motto, “Streets raised us. Horses saved us,” isn’t just a string of empty words. In addition to Wade, members include Anthony Harris, a former drug dealer and inmate; Keenan Abercrombia, who bounced between gangs for years; and Randy Hook, who lived out of his car while trying to support the mother of his child. Today, these seasoned ranch hands from the hometown of gangster rap group N.W.A. are competing in national rodeos and polo competitions, organizing peaceful protests and mentoring the next generation of urban equestrians.

Though Richland Farms is still the Cowboys’ home base, their regular rides through the urban streets of Compton—wearing baseball caps instead of ten-gallon hats and Air Jordans rather than cowboy boots—have made them local celebrities. It’s not uncommon to spot a mounted Cowboy picking up their kid from school or ordering food from a drive-through. The incongruity is part of the point.

But while urban horses are unusual, Black cowboys have a long, if unsung, history in America. After the Civil War, when wild herds of cattle proliferated in the West, as many as 8,000 Black cowboys rode the prairies. Many Black men and women chose the cowboy life as an alternative to the blue-collar jobs they were relegated to in major American cities. The Compton Cowboys may be the first group of Black cowboys with an Instagram account, but they’re staking a claim to their rightful place in a deep-rooted American tradition.

And the Compton Cowboys aren’t alone on their rogue mission: There are other Black cowboys in Philadelphia, Baltimore, Houston and other cities. Wade and her fellow riders aim to build a sustainable business model that will inspire the creation of even more Black cowboy groups throughout the country. If the Compton Cowboys have their way, urban ranches will be commonplace, and the sight of Black men and women riding horses through city streets will continue to inspire young people to turn away from violence and toward lives of empathy and engagement.

“Growing up in Compton wasn’t easy,” says Wade. “But once I got on a horse, nothing mattered. I always felt free.”

Hisako Koyama: The Astronomer who Left Her Mark on the Sun

Sponsored by Nissan
Want to see fewer ads? Become a Member.
From Around the Web
Related