The Long History of the Quest to Find a Peak Taller Than Everest - Atlas Obscura
Want to see fewer ads? Become a Member. 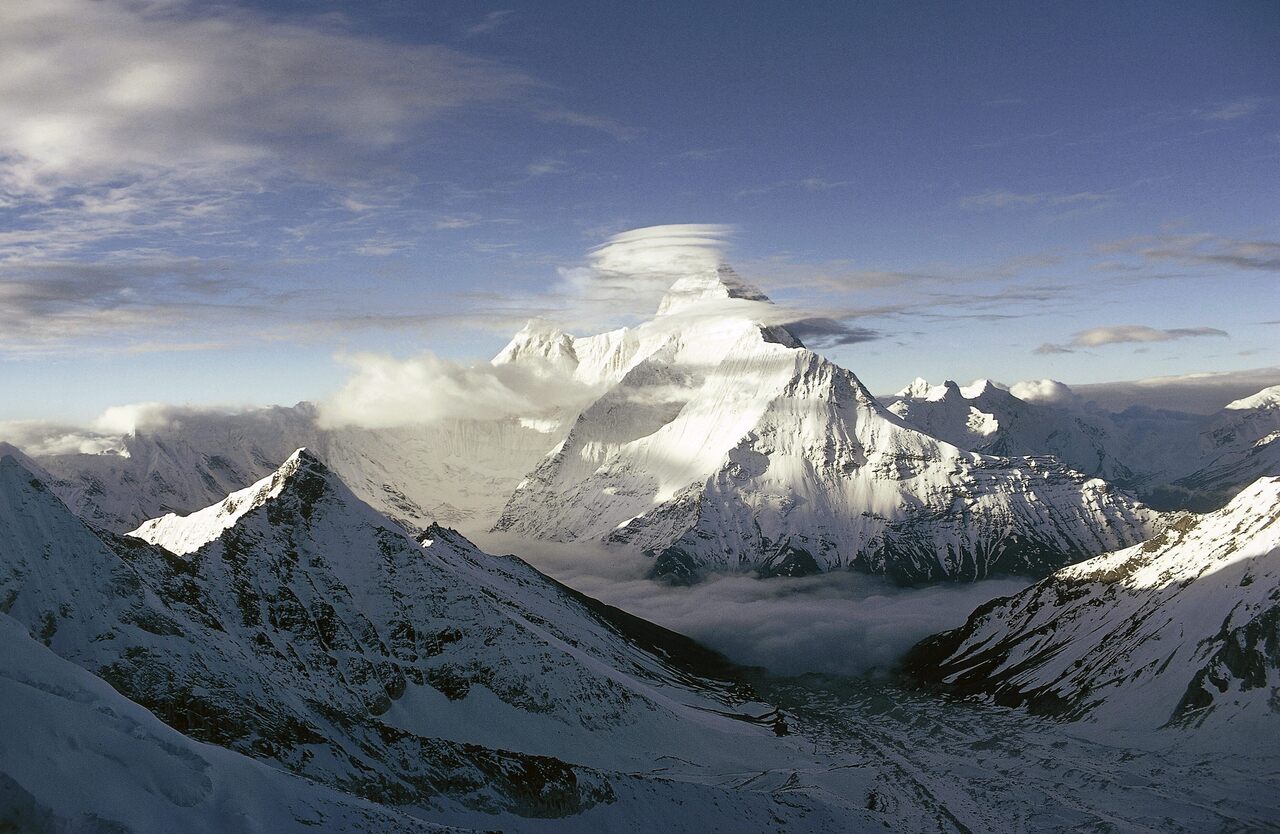 India's Nanda Devi, once thought to be the world's tallest mountain, tops out at 25,643 feet, more than 3,000 feet shorter than Mt. Everest. DeAgostini/Getty Images
In This Story
Destination Guide

Excerpted from Imaginary Peaks: The Riesenstein Hoax and Other Mountain Dreams by Katie Ives (October 2021) with permission from the publisher, Mountaineers Books. All rights reserved.

The idea of a summit taller than any known peak has long held a special allure for mountaineers. Early surveyors had mistakenly designated various Himalayan peaks as the highest mountain in the world, including Nanda Devi, Kangchenjunga, and K2. Those errors were corrected in the 1850s after Indian mathematician Radhanath Sikdar and his colleagues at the Great Trigonometrical Survey finished calculating the elevation of “Peak XV,” the mountain Tibetans call Chomolungma, at 29,000 feet, and the summit gained its superlative status on maps. Sikdar’s British director, Andrew Waugh, recommended the peak be termed “Mount Everest,” after the previous Surveyor General of India—much to the dismay of George Everest himself, who preferred the use of local names. Waugh also added two more feet to its estimated height for extra plausibility, giving it the more precise-looking number of 29,002. (“Wags noted that Waugh was the first person to put two feet on the top of Everest,” New Yorker writer Ed Caesar later quipped. As of 2020, Everest’s official height is 29,031.69 feet.) But some mountaineers still hoped that an even bigger peak existed in a remote corner of the world.

In March 1930, American mountaineers Terris Moore and Allen Carpé lingered in The Explorers Club library in New York, transfixed by an intricately detailed map in Trailing the Giant Panda, a 1929 account by the brothers Kermit and Theodore Roosevelt Jr. of a hunting expedition along the border of China and Tibet. “Is there really any chance Mount Koonka could be that high?” Moore asked.

Carpé pointed toward a short but beguiling paragraph: “The altitude of this mighty peak is unknown, but there are those who claim that it rises more than 30,000 feet and is the highest in the world. A geologist from Chengtu [Chengdu] made a special expedition to establish Koonka’s height, but after he had taken his observations, he refused for some entirely unaccountable reason to divulge them.”

Minya Konka, as it’s more commonly spelled today, Moore and Carpé soon learned, wasn’t the only candidate for the true Roof of the World. Just a month prior, National Geographic had published an article by botanist Joseph Rock with an intriguing title: “Seeking the Mountains of Mystery: An Expedition on the China-Tibet Frontier to the Unexplored Amnyi Machen Range, One of Whose Peaks Rivals Everest.” Rock was sure he’d reached 16,000 feet on his journey. The flash of snow at the apex of “Amnyi Machen” (or Amye Machen) appeared to be at least 12,000 feet higher. During an earlier trek, British Brigadier General George Pereira had reported a glimmer of uncertain height in the same region. According to Rock, Pereira informed him that the peak “when surveyed, might prove higher than Everest.” (Cecil Pereira, the late brigadier general’s brother, disputed this statement, which he attributed to an “optimistic reporter” who sprang upon the explorer while he was ill.)

A 1925 map in The Explorers Club library, based on Pereira’s report, generated even more questions. The contour intervals implied that the broader massif of Amye Machen was only about 25,000 feet high, though no elevation number appeared on its actual summit point. And at the location where Moore and Carpé expected to see Minya Konka, they found contour lines that indicated nothing above 16,500 feet. Perhaps, they thought, clouds had hidden its summit when Pereira plodded by. A National Geographic Society cartographer told them that Rock had originally announced an elevation of 30,000 feet for Minya Konka. But since Rock had relied merely on guesswork, a simple aneroid barometer, and a pocket sighting compass, the editors refused to publish any estimate above 28,000 feet.

The only way to find out the real numbers, Moore determined, was to climb the peaks and remeasure them. He planned to start with Amye Machen. Although Carpé was tempted to come along, he decided to head to the Alaska Range instead, with a grant to research cosmic rays. Jack Young, a Chinese-American college student who had guided the Roosevelts on their hunting expedition, took his place. By January 1932, Moore and Young had arrived at a hotel in Shanghai, and they were lunching with their teammates when the blast wave of a bomb shook the walls. A battle had just broken out between China and Japan. Several of the climbers joined a volunteer force to patrol the American-controlled sector of the city. Young went to help the Chinese army. After the conflict lulled, four weary members still wanted to look for the world’s highest summit: Moore, Young, Arthur B. Emmons, and Richard Burdsall. By then, they’d switched their objective to Minya Konka, which they’d come to believe was the most promising option.

After weeks of traveling by riverboat and bus, and trekking through misty foothills, they saw Minya Konka for the first time: cloud-white and unknowably high. “Here was one of the greatest mountain giants of our planet,” Burdsall declared in the team’s coauthored memoir, Men Against the Clouds. “No wonder its call had been powerful enough to summon us from so far.” To local Tibetans, the peak was the abode of a deity, Dorjé Lodrö. A sunlit plume of spindrift seemed to extend its apex ever higher into the sky. “Climb it?” Emmons thought. “It seemed almost a desecration even to attempt such a thing.” When Burdsall and Moore reached the top of Minya Konya, the elevation proved to be more than 4,000 feet lower than that of Everest. Nonetheless, the rest of the world sank so far below them they might have been gazing at the earth from outer space. Large snowy mountains shrank to tiny puffs of white against the gold-brown swath of the Tibetan Plateau. The horizon formed an indigo ring, uninterrupted by any view of higher peaks.

In the wake of their expedition, rumors continued to build about Amye Machen, which Moore and Carpé had identified as the other contender for the world’s highest peak. For more than a decade afterward, reports by pilots still hinted that it might be above 30,000 feet. To Moore, however, the next best hope for a mountain taller than Everest lay in the mysterious interior of Antarctica. There, tales of unseen ranges, subterranean summits, and uncanny light effects lent themselves to bizarre fantasies, such as H. P. Lovecraft’s infamous Mountains of Madness, where a lost extraterrestrial civilization lurked beneath the ice.

During the 1940s, American explorers Richard Byrd and Paul Siple reported sighting a cone-shaped mountain that soared higher than their plane. The peak became known as Mount Vinson. Yet in 1959, when Scottish mountaineer John Pirrit and his teammates lumbered into the area on snow tractors to verify its existence, they found no sign of the mountain. Another high summit, Mount Nimitz, was also missing. The original discoverers of these nonexistent mountains had likely mistaken clouds and mirages for actual rock, ice, and snow.

The designation of “Vinson” eventually moved to a 16,046-foot summit in the Sentinel Range, the continent’s true highest point. While surveyors kept correcting elevation errors of other Antarctic peaks well into the 21st century, by the culmination of the multinational expeditions of the 1957–1958 International Geophysical Year, one fact seemed clear: Among the many unclimbed summits that corrugated the southernmost continent, no greater elevations than that of Everest existed. In 1957, Russia launched Sputnik, the first artificial satellite. Soon after, US scientists began the research that led to the creation of GPS and the spread of satellite mapping—technologies that would generate a sense of cartographic omniscience even greater than airplane photos could achieve.

Decades later, as Moore looked back on the long history of quests for the “highest mountain in the world,” he thought of new interpretations. The tallest peak could be the one that pokes out farthest from the surface of the earth when viewed from space (Chimborazo in the Andes). Or it could be the one that has the highest vertical relief from its terrestrial base to its summit (Denali in the Alaska Range) or from the ocean floor (Mauna Kea in Hawaii). Moore recalled a story told by his departed friend Allen Carpé, who had vanished into the depths of the Muldrow Glacier during his 1932 Alaskan expedition, leaving behind only the faint trace of ski tracks that faded into snow and shadow. During the 18th century, as Carpé recounted, while carrying out experiments near Chimborazo, French geophysicist Pierre Bouguer realized that the topography beneath his observation points, as well as the altitude of where he stood, affected the measured value of gravity. It was as though high peaks really did create their own world.

“So relax,” Moore’s wife, Katrina, told him. “There is no highest mountain on earth.” Was the quest over? Moore wondered. He remembered standing outside the Minya Konka base camp under a sky that trembled with stars. The upper regions of the peak seemed suddenly close by, like a blazing white fata morgana in the clear night air. “In the presence of this vision,” Moore wrote, “ellipsoids of reference, Bouguer’s Anomaly, centrifugal force from the unfelt thousand-mile-an-hour spin of the earth’s rotation, all seem to vanish into unimportance: there before us rises our reality.”

Podcast: Seashell Shrines and Bones With the Places Team

Nepal's Mounting an Expedition to Discover if Everest Has Shrunk

The long history of measuring the world’s highest point.
exploration

Will it help solve the peak's trash problems?
objects of intrigue

Secrets of One of the Earliest Terrestrial Globes

The Hunt-Lenox Globe is significant in so many ways.
maps

In the 19th century, the romance of mountains met the desire to quantify the natural world.
Video • Wonder From Home