Around the World in Summer Treats That You Can Make at Home - Gastro Obscura
Want to see fewer ads? Become a Member. 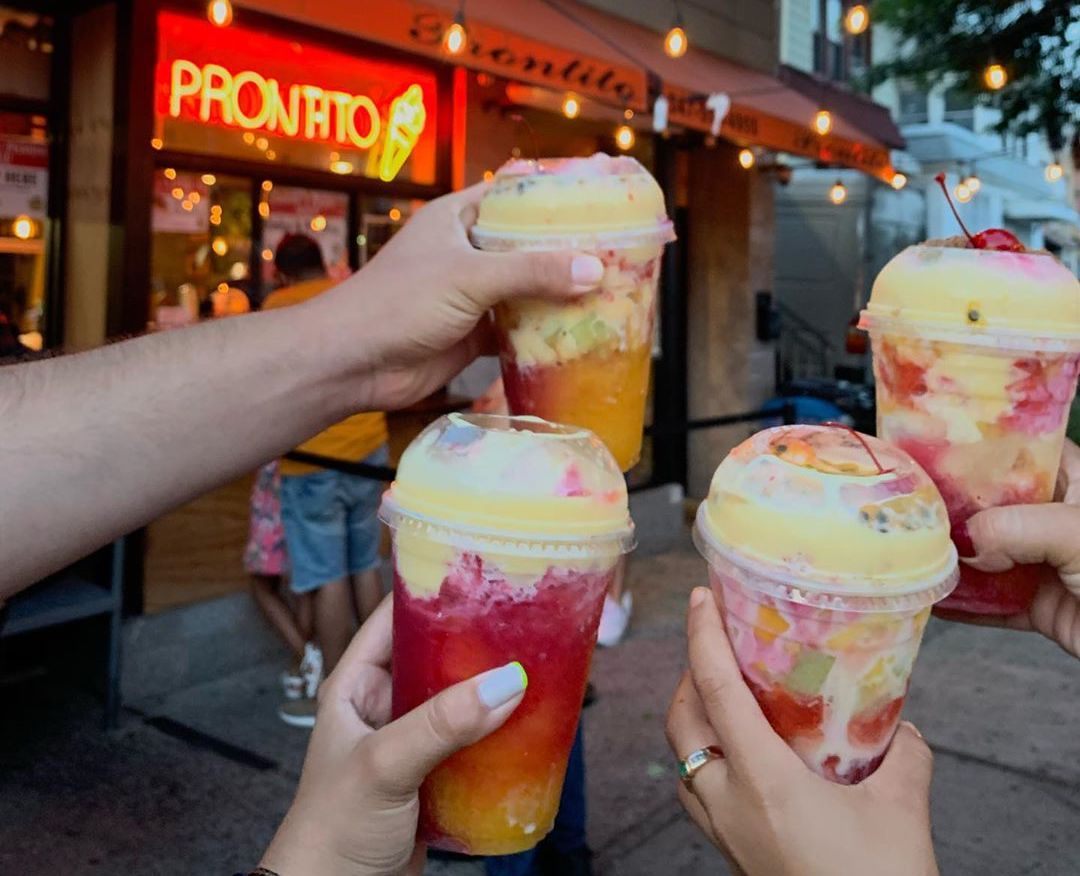 You may not be able to travel internationally, but that doesn't mean your desserts can't transport you. delic.eye/used with permission

There is a distinct feeling that arises when your preconceived notions about a particular ingredient are upended by a single morsel of food eaten in a faraway place. It’s a combination of bewilderment, denial, and awe. It’s visceral; it gives you pause in the greatest way possible. “How did I not know this was pig’s blood? Why is it so good?” One would think there’d be a word for this feeling in some language, with safe bets on German, but searching online yielded no such truth.

Whatever it’s called, it’s unfortunately not something many of us will be experiencing in Guadalajara, or Nagano, or Mumbai this summer, at least not yet. However, with one quick trip to the grocery store, there are a number of ways you can recreate that feeling without getting on an airplane. Even if you weren’t planning a trip, if you made it through the spring of 2020, you deserve a treat, or 11.

The list makes stops at an array of far-flung locations whose summertime sweets are as iconic as they are singular: the Japanese cafe where, in another reality, you’d realize fruit can be a sandwich filling; a French beach town where the shellfish are caramel; a Dominican street cart where orange juice and milk don’t curdle; and an Indian eatery where rosy noodle desserts come with straws. Beat the heat, make some sweets, but, most importantly, treat yourself.

Of all the ways to die, doing so while drinking the Dominican Republic’s official summertime beverage is far from the worst. Fret not, it’s only called “to die dreaming” for the state of transcendent bliss that it induces on a hot day.

Primarily served as a dinner drink or midday snack, morir soñando marries orange juice with milk, mixed with a deft hand to prevent the unlikely duo from curdling. Along with vanilla extract and crushed ice, the flavor bears a striking resemblance to a Creamsicle. If you’re celebrating, white rum works well with the tropical flavor pairing. Try this recipe from Dominican Cooking.

French boomers will wax nostalgic over the sunburned, sandy-footed days of their childhood summers spent cutting their tongues on roudoudous at the beach. From the 1950s to the 1970s, confectioners drizzled caramel and colorful syrups into actual seashells, letting them harden and selling them to beach-going families as a sort of rustic nautical lollipop.

Of course, allowing children to lap hardened sugar out of mollusk parts invites a degree of liability, so mass commercialization of the popular candy in later years meant exchanging seashells for plastic stand-ins. But you deserve the real thing. Throw caution to the wind, rinse off those shells, and try this recipe from Le Journal Des Femmes.

In much the same way tomato juice is better on airplanes and watermelons are better at the beach, Dole Whip is simply better within the bastions of marvelous garishness that are Disney’s parks and resorts.

Introduced by the Dole Corporation in the 1980s, the pineapple soft serve became famous overnight, ubiquitous now wherever the Disney empire has put down roots. For those who grew up on Wreck It Ralph, Frozen, or Big Hero 6, the addition of pineapple juice turns it into a Dole Whip Float; if you grew up on Hocus Pocus, Fantasia, and Hook, however, white rum makes it a Boozy Whip. Try this recipe for Dole Whip from The Spruce Eats.

From Colombia’s less-traveled Pacific region, this summer heat-buster has identity issues. The cholado is a fruit salad, a snow cone, and a milkshake all in one.

Crushed ice soaks up fruit syrup and condensed milk before it’s crested with a pile of whatever summer fruits are freshest and most available, which for a fruit paradise like Colombia can mean cherimoya, granadilla, and starfruit, though mangoes, strawberry, and banana work just as well.

Whatever you use, both a spoon and a straw are mandatory. Try this recipe from Sweet y Salado.

Think of all the times you’ve raced against melting ice cream, rushing the last several bites of your Western ice cream sandwich, while sticky streams of chaos run down the length of your forearm—a devastating way for any child to learn that they cannot lick their elbow.

The Singaporean method leverages the absorptive qualities as well as the aesthetic allure of color-decorated white bread to ensure your ice cream remains in situ, and in style. This ambitious recipe from Saveur builds the sandwich from the bread up. But for a simpler sampling, try throwing your choice of ice cream on a slice of Wonder Bread—you’ll notice the difference.

In the early 20th century, the gazoz was dreamed up as a fruit syrup–laden fizzy beverage for punishingly hot Israeli summers. By the 1950s, it was the most popular drink in the country, though the introduction of big-name international soda brands in later years buried the humble gazoz in a sea of Coca-Cola products for decades.

Come 2011, however, one young Tel Aviv barista rescued the drink from the brink of extinction, trading out artificial flavors for fresh, seasonal fruit and ushering in a veritable gazoz renaissance. Recipes for the lost-and-found summer sipper now vary from person to person, but have quickly evolved to feature summer fruit (berries, melons), spices or herbs (black peppercorns, thyme, mint), and even acidic elements (lemon juice or vinegar). Try this recipe from West of the Loop.

While it may come across as the plaything of a pop-up chef, this South Asian dessert drink is actually the oldest on this list.

Falooda is believed to trace its origins back to what is today Shiraz, Iran, around 400 B.C. Originally, it was simply grape-juice laden snow, but its arrival on the Indian subcontinent heralded somewhat of an evolution. And while historians are split over whether the dessert migrated with Mughal Emperor Jahangir or the contemporaneous shah of Iran, what is certain is that it was the stuff of royalty. Luckily today, all you need is an “International” aisle in your local grocery store to eat like a king.

Sweet basil seeds form the foundation of this floral, creamy drink that also features rice vermicelli. Top with pistachios, rose, a royal scoop of ice cream, or all three. Try this recipe from Indian Healthy Recipes.

If the thought of avocados being used in sweet dishes elicits pearl-clutching, do remember that it is technically a fruit. That fact was not lost on the Vietnamese, for one.

According to Andrea Nguyen from Viet World Kitchen, when the French introduced le avocat in 1940, the Vietnamese called it trái bơ, or “butter fruit,” implying that avocados function as well in savory settings as sweet. The Vietnamese sinh tố bơ is, however, decidedly sweet.

While Nguyen grew up eating avocado with a pool of condensed milk where the removed pit once sat, sinh tố bơ’s blend of avocado, ice, milk, and condensed milk is a more broadly popular method enjoyed across the region. Try Nguyen’s recipe from Viet World Kitchen.

When it’s summer in Japan, fruit sandos are the perfect way to have your cake—call it “a sandwich”—and eat it, too. Ripe fruits are neatly nestled in a cloud of chilled whipped cream between two impossibly pillowy slices of shokupan (Japanese milk bread) before being surgically sliced in such a way as to present the bisected, crustless triangles as art. Try this recipe from Just One Cookbook.

In 2011, the National Academy of Sciences published an article outlining the discovery of new sugar receptors on the tongue that are activated by salt. Around the same time, the popularization of paleterias north of the U.S.–Mexico border introduced international audiences to the mangonada (alias: chamango). It was sweet-and-savory destiny.

Consisting not only of mango sorbet, liquid chamoy (a Mexican condiment made from salted, pickled fruit), lime, and Tajín (a beloved Mexican chili-citrus-salt seasoning), but traditionally sipped through a tamarind-and-chili-paste-coated straw, this chilling umami masterpiece leaves no corner of your mouth unstimulated. Try this recipe from NYT Cooking (note: it plays well with tequila).

When the Tasaka family first created the hybrid of ice cream and sherbet that would one day make them famous among Maui residents, they kept the naming process simple. It was good, so they called it “goodie goodie.”

There was only one problem, explains Henry Tasaka: “Older Japanese found it hard to pronounce, so [we] changed it to ‘guri guri’ so they could roll their r’s as they do in Japanese. It’s hard to explain to the tourists, so we just say guri guri.”

Not quite ice cream, not quite sherbet, the frozen treat is a singular textural experience in the frozen dessert landscape as well as a taste of home for anyone who grew up in Maui. The family refuses to divulge the original recipe, but it’s likely a frozen blend of strawberry or pineapple juice, lemon-lime soda, and sweetened condensed milk. Those who have tried the original claim imitations don’t even come close, but don’t let that stop you from failing, too. Try this recipe from Foodland.

A Database of 5,000 Historical Cookbooks Is Now Online, and You Can Help Improve It

The Family Dynasty That Pursues Perfection in Shaved Ice

For three generations, the Hansens have made summer sno-ball season in New Orleans.
food

Exit Interview: I Was the Director of Research and Development at a Candy Company

His proudest achievement? Putting your face on an M&M.
churches

How Building Churches Out of Egg Whites Transformed Filipino Desserts

What else are you going to do with all those yolks?
food

When Cow Tongue Was an Essential Thanksgiving Ingredient

It made American pies rich and indulgent.
Video • Wonder From Home