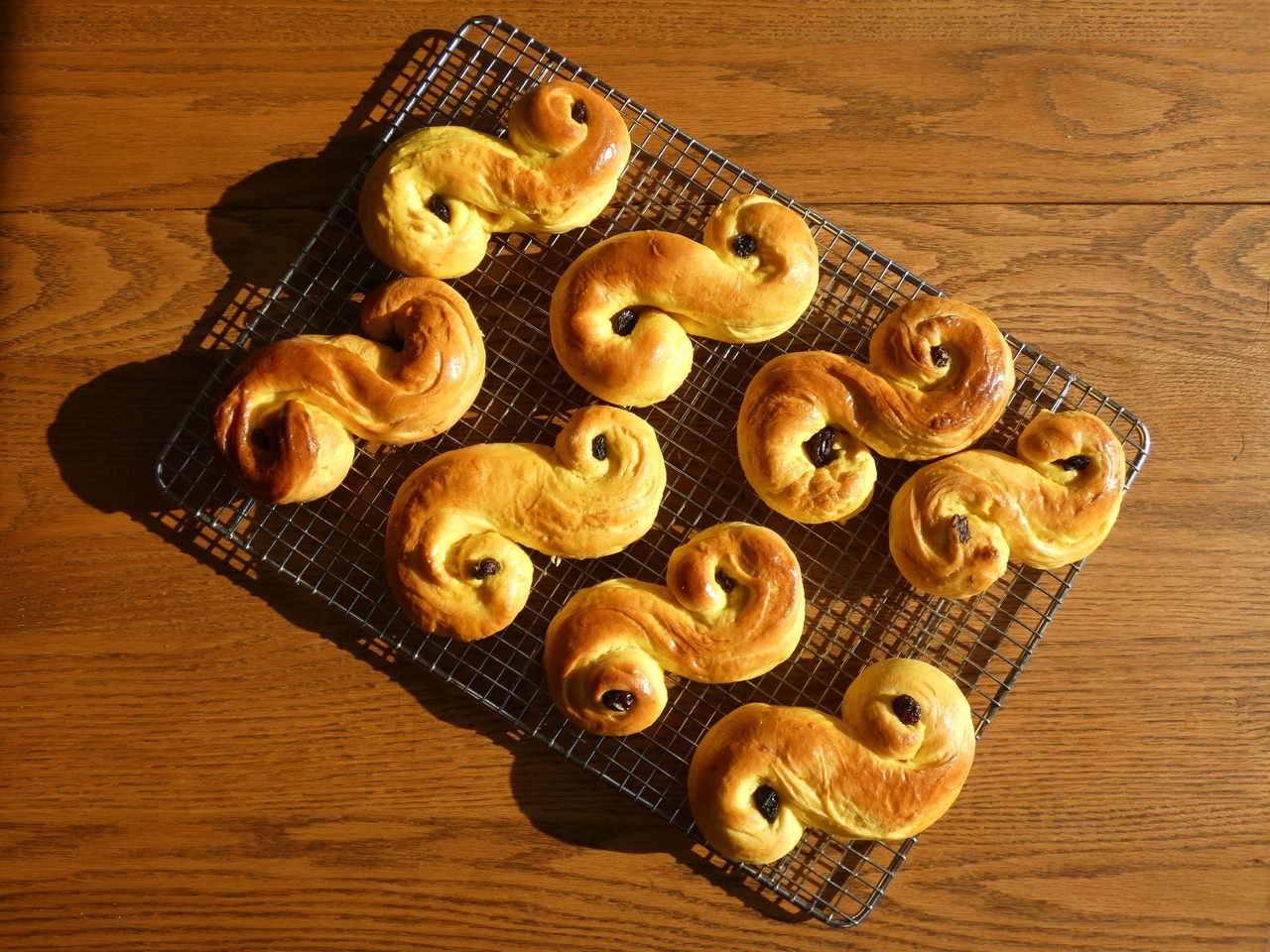 The yellow buns are bright as the morning sun. Luke Fater for Gastro Obscura

Every year, on December 13, golden-hued saffron buns bake in ovens across Scandinavia. Eating this sweet bread—known as lussebullar or lussekatter in Sweden and Norway, luciabrød, in Denmark, and lucia-pullat in Finland—heralds the celebration of St. Lucia’s Day. In Sweden, eldest daughters often serve their parents buns and coffee in the morning while wearing a white gown, red sash, and a candle-lined wreath crown. The costume pays tribute to St. Lucia, a Christian martyr who died in the fourth century, executed by the authorities for her faith. The red sash represents her murder, while the candle-filled crown honors how, in legend, she illuminated her journeys through dark Roman catacombs to deliver food to Christians in hiding.

There’s another reason why celebrating Lucia, a figure whose name comes from the Latin word for light, is so important on this date. In the old Julian calendar, December 13 marked the winter solstice. In parts of Scandinavia, a folk belief held that demons and goblins could roam free for their “Wild Hunt” that night, the longest and darkest of the year. Because of these legends, lussekatter buns, or “Lucy’s cats,” have earned a supernatural reputation: one that, as it turns out, is entirely unearned.

In Sweden, it’s now an oft-repeated assumption that eating the buns on the winter solstice was a pre-modern method to ward off the devil. This largely stems from lussekatter’s original name: dövelskatter, or the “devil’s cats.” But don’t get too excited. The name “has nothing to do with cats,” says Lena Kättström Höök, a former curator at the Nordic Museum and the author of Lucia Revisited. Nor is there anything demonic about them. The name actually comes from a Dutch midwinter feast bread known as duivekater. There’s even pictorial evidence of the bread’s spread into Sweden in the 17th-century, with paintings of duivekater showing the loaves with swooping whorls molded on each end. The loaves are much longer, but the whorls are still similar to the curled knots of modern, smaller St. Lucia’s Day buns.

But this Dutch ancestor to lussekatter also has a devilish connection, albeit one that baffles etymologists. The word duivekater translates to “devil’s tomcat” or “devil’s cake.” The 2009 Etymological Dictionary of Dutch offers several theories on its origins. The semi-plausible possibilities are that it was the nickname of a popular baker in the city of Leiden, or that it’s simply a warped version of an earlier, unknown word. In the less-likely camp, it could be a reference to pre-Christian animal sacrifices. But the dictionary clarifies that there is “no cultural-historical evidence” to support that claim. It does offer that duivekater was originally baked on Christmas and Easter, “two Christian holidays that mark the victory of light over darkness, of the Messiah over Satan.”

St. Lucia’s Day, too, celebrates the victory of light over darkness. Though traditions have changed over the centuries, the practice of creating warmth in the cold and light in the night has endured. Try the recipe below for some golden buns that might not keep the devil at bay, but will certainly keep you warm, full, and happy.

Adapted by Luke Fater from The Spruce Eats

Yields 8 to 12 buns, depending on their size.

2. While the butter is infusing, heat the milk in a saucepan over medium heat until it’s almost boiling, then pour it into a large bowl. Add the sugar, salt, and saffron butter, and let it cool. While it’s still warm, stir in the yeast and let it sit for 10 minutes.

3. After 10 minutes, add 4 cups of flour to the bowl as well as 2 of the eggs, beaten. Mix into a soft dough, reserving the last 2 cups of flour to add as needed. Form the dough into a ball, and leave it in the bowl, covered, with a cloth or dish towel. Let rise for 45 minutes.

4. Gently knead the risen dough on a floured surface. Tear chunks from the ball and roll into “snakes” with pointed ends (for smaller buns, make smaller snakes). For each snake, start with one end and twist it into a flat spiral, ending halfway up the dough snake. Repeat with the other end, but roll in the opposite direction, creating a swirly, S-shaped bun. Repeat with the rest of the snakes, placing each twisted bun on a greased baking sheet. When done with all the dough, cover the baking sheet with a dish towel and let them rise for another 45 minutes. Meanwhile, preheat the oven to 375° F.

5. Before baking, brush the risen buns with beaten egg and nestle a raisin in the center of each swirl (two per bun). Bake for 15 minutes, or until golden brown.

Boilo is a favorite across coal country.
christmas

The Danish Christmas Porridge That Appeased a Vengeful 'House Elf'

Once a magical, murderous farmhand, the nisse has transformed into a beloved holiday figure.
santa claus

At Milwaukee’s Krampusnacht, we go in search of the essence of Santa’s unholy enforcer.
trees

Cooking with evergreens has a long history.
Video • PinDrop