How Landmines Made This Sri Lankan Lagoon an Avian Paradise - Atlas Obscura
Want to see fewer ads? Become a Member. 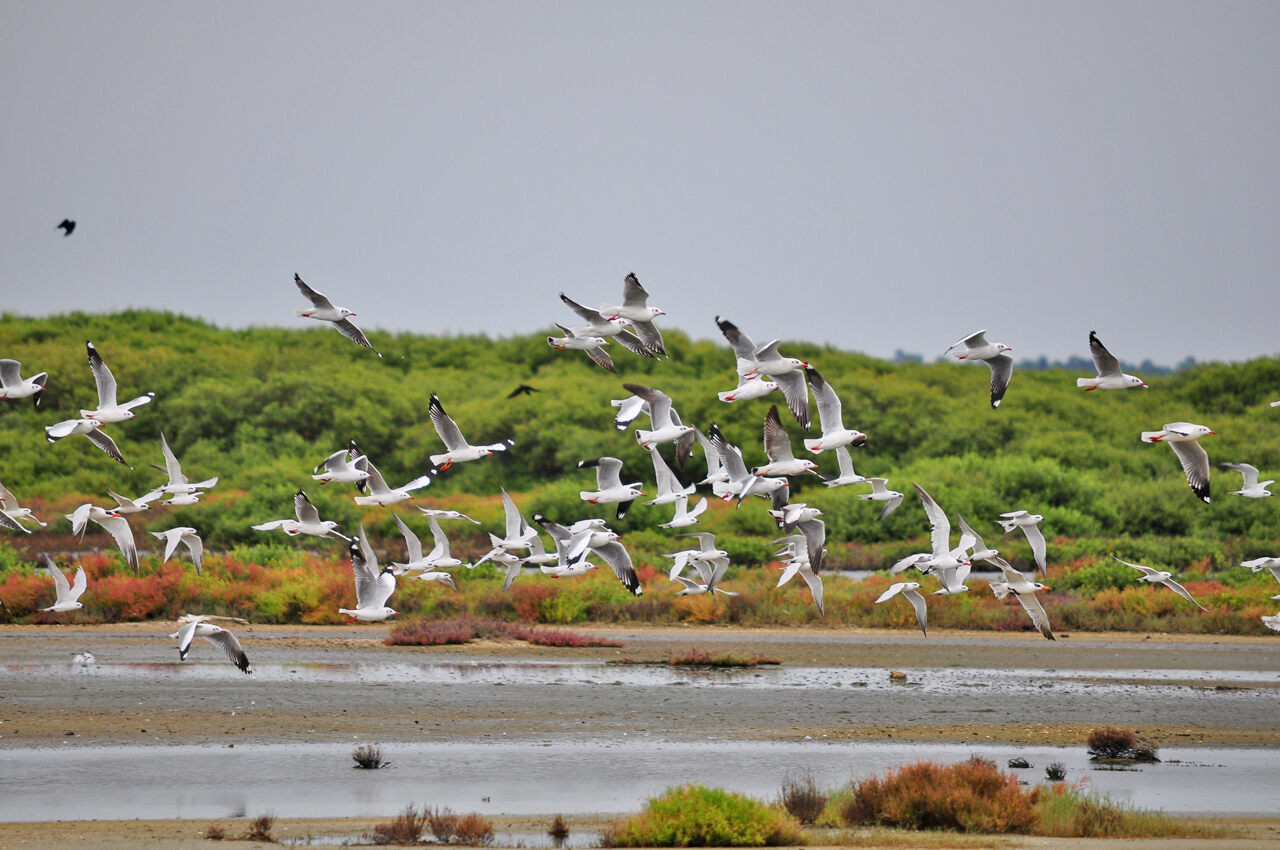 Located on the Jaffna Peninsula, the Thondamanaru Lagoon has become a crucial wetland on the Central Asian Flyway, one of the world’s major migratory routes. Packiyanathan Rajkumar
In This Story
Destination Guide

On a recent Sunday morning on Sri Lanka’s Jaffna Peninsula, Packiyanathan Rajkumar was standing on a swampy dirt road that cuts across the Thondamanaru Lagoon. He often visits this site to research the many bird species here. But they’re species he’s never fully studied—because wading into the water could end his life in a literal flash.

Every few minutes, after pulling up his black pant legs to slog through yet another enormous puddle, the ornithologist would stop, point, and say, “Look at this,” in awe of his surroundings. Mangroves grew tall and thick across a sheet of lightly rippling water. White cranes fluttered under a sky washed pale blue by the rising sun. Aside from the occasional buzz of a distant motorbike, everything was quiet.

This road once served as part of the border between the Sri Lankan military and separatists known as the Liberation Tigers of Tamil Eelam, with whom the government fought a ruthless civil war from 1983 to 2009. Both sides laid mines in the shallow lagoons of the country’s Northern Province, and though much of the terrain has been cleared, a large swath of the Thondamanaru Lagoon remains littered with explosives. For decades, few people have ventured here aside from a handful of fishermen who, in search of tilapia, drift onto the water in paddleboats.

“The fishermen said they’d take me, but my mother said no,” joked Packiyanathan, 36, one of the few scientists who studies Jaffna’s birds. Then his laughter faded into something grave. “Anything can happen at any time, you know.”

Landmines have long been a lurking danger to anyone whose life is tied to the north, but the immense threat that has largely kept people away from this lagoon has proven life-giving for year-round and migratory birds such as purple herons, painted storks, red-wattled lapwings, black-tailed godwits, whiskered terns, kingfishers, and well over 100 other species documented by Packiyanathan and other researchers.

According to Chaminda Wijesundara, a senior lecturer at the University of Peradeniya who has studied Thondamanaru’s birds alongside Packiyanathan, the absence of humans has turned this into a crucial wetland for migrants traveling along the Central Asian Flyway, one of the world’s major migratory bird routes. Some of the birds that stop here hail from as far away as northern Europe.

The Sri Lankan army and the demining organizations it has partnered with plan to clean up the Thondamanaru Lagoon as part of a broader effort to rid the country of explosives. Once the ordnance is gone, the lagoon could become valuable real estate for hotel developers looking to capitalize on the wilderness-in-your-backyard aesthetic that already defines several of the area’s resorts. That development would threaten one of the few migratory-bird habitats on the Central Asian Flyway that hasn’t already been mangled.

But Packiyanathan, who is associated with the University of Peradeniya’s Postgraduate Institute of Science, hopes he can save it—with a different kind of tourism.

The Thondamanaru Lagoon flourished only because, for 26 years, the Jaffna Peninsula was plagued with violence. During that time, the single highway that connects the peninsula to the rest of Sri Lanka—the A9—became the cratered site of intense battles. Building materials couldn’t reach the city of Jaffna, and an economic embargo gave people here little incentive to invest in the peninsula’s future. Bombs shattered the city’s roads when the military attacked from the north. Homes were scorched to smoking husks. Some 100,000 people were killed, and even more Tamils from the north and east fled the country.

As the military’s grip on the city tightened, fighting shifted toward the peninsula’s lagoons. Troops made sure that few people got close to these wetlands, and the area remained off-limits to civilians for years after the war. Jaffna’s lagoons prospered during this time, and, according to Packiyanathan and Wijesundara, the area most rife with unexploded ordnance became the birds’ favorite spot. Today roughly 100 of the Thondamanaru Lagoon’s 19,000 acres (its size during the rainy season) is still a minefield.

As all of this was happening, the Central Asian Flyway was being degraded by a host of factors. Roads, buildings, pollution, saltwater intrusion, and increasingly erratic rainfall ruined similar bird habitats along the route.

“The remaining [habitats], they are of utmost importance to the migrants,” says Wijesundara. “All of the other habitats have been destroyed.”

For years the Thondamanaru Lagoon thrived because it was off-limits to most human intrusion. Now, as the mines are being removed and development is becoming a real possibility, the lagoon’s survival may depend on people seeing it as a resource that’s worth more if preserved than plundered.

Standing on a bridge overlooking the pastel blue mouth of the Thondamanaru Lagoon, Packiyanathan explained his plans to save and promote his favorite area of study. The mouth of the lagoon would be great for short boat tours, he said. Locals could be paid to guide tourists to flocks of birds on the wide open lagoon, under the bridge, and into the narrow channel that flows toward a strip of white sand, where that Sunday a group of kids was dashing back and forth before the Palk Strait. The former border road could be paved to support cars that would ferry visitors to birdwatch towers. Locals could also lead tours of the nearby sand dunes, or walk visitors through the mangroves.

“[Writing the governmental] proposal for me is easy—it’s just one hour of time,” Packiyanathan said. “But who will invest? Who will run the business?”

To preserve the lagoon, he needs locals and investors to see its preservation as a chance to make money. Right now, he said, “nobody knows about what birds are here.”

That may start to change as a result of the research he plans to publish—but perhaps not quickly enough to ward off development. Studying the Thondamanaru Lagoon can be a time-consuming endeavor, because it’s dangerous even in the areas that aren’t pocked with mines. Crocodiles have innumerable hiding spots in the mangroves. And an errant step could crack the crusty surface of the ground, which hardens during the March-to-August dry season, plunging Packiyanathan up to his hips in goop.

Plans are now in the works to build hotels and a cricket stadium on the nearby Jaffna Lagoon. As tourism grows in Jaffna, says Wijesundara, developers might cut through the mangroves of a freshly demined Thondamanaru Lagoon, paving roads that will bring people and all their attendant waste.

But Jaffna tourism is minuscule compared with that in much of Sri Lanka, a nation that generates around five percent of its economy from the industry and was Lonely Planet’s top 2019 destination. This gives conservationists a chance to build ecotourism into a visitor’s experience of the north. Right now, ecotourism on the peninsula has “maybe 0.1 percent market share, but it has a huge potential in [the] future,” says Sriskantharajah Karthigan, of the Northern Province Tourism Association.

Hotels would need to facilitate that type of tourism by connecting visitors with local guides, and providing binoculars to people who didn’t come to watch whistling ducks and water kites all week but could make a day of it.

Ecotourism would also have to sustain itself during the majority of each year when migratory birds are elsewhere, says Piratheepa Vipulan, an environmental scientist and senior lecturer at the University of Jaffna. Delft Island—a short boat ride from the peninsula—has wild horses that tourists might want to see on a day trip, and boat tours could extend from the lagoon to different parts of the coast.

As Packiyanathan walked along the edge of the minefield, he stopped talking about investors and tourists. He pulled his phone from his pocket and held it up every minute or so, sometimes snapping a photo, sometimes recording sound or video. He wasn’t capturing anything in particular. But in a sense that was the point. The beauty and importance of the place are self-evident. He just wants others to see what he sees.

Acorn Woodpeckers Have Multi-Day Wars, and Birds Come From All Around to Watch

And helped launch a corporation now worth more than $40 billion.
animals

Prince Rupert of the Rhine's poodle, Boy, was said to be a witch, but it was all fake news.
Video • Gastro Obscura