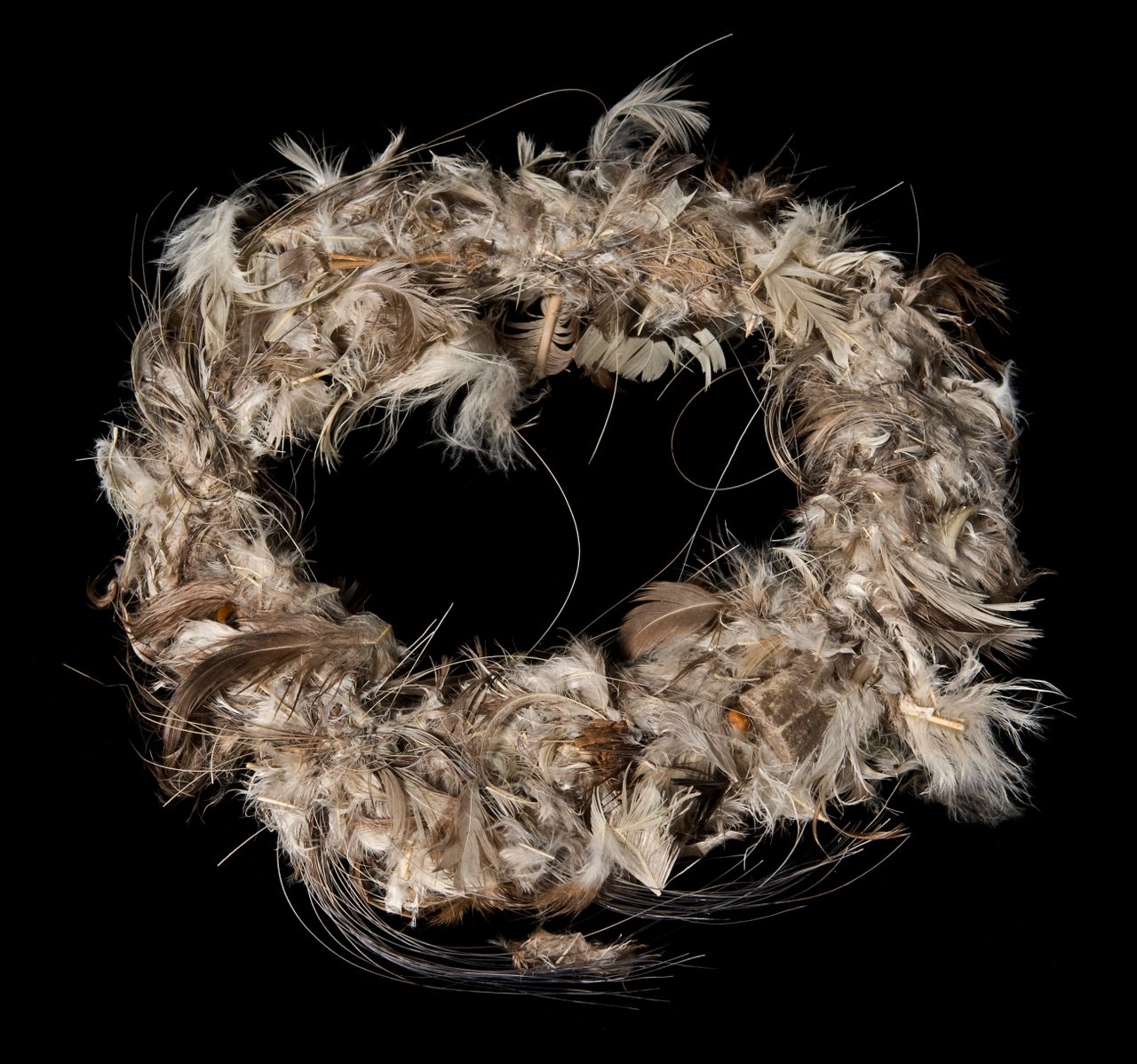 A ghirlanda. Pitt Rivers Museum/University of Oxford
In This Story
Place

Ashmolean Museum of Art and Archaeology

Used as an example in one of the first dictionary entries for "museum" in 1706.
Place

Maybe it’s the black background, but the feathery ring above has an eerie vibe to it. A ghirlanda—Italian for garland—like this one would have smelled “extremely nasty,” at least at first, according to one report. Woven among the feathers, there would be bone, hair, even old teeth, and it had a sinister purpose. Hidden in a person’s bed, it was supposed to cause them to fall ill and die. “Everyone believed I had bought the ghirlanda in order to get rid of my husband!” wrote an English historian living in Italy, in a letter to a friend who’d asked her to procure one—purely for research. (Or so the friend said.)

The ghirlanda above is just one of the objects associated with magic and witchcraft featured in a new exhibit, called Spellbound, at the University of Oxford’s Ashmolean Museum, which is dedicated to art and archaeology. The aim, according to the museum, is to “show how, even in this skeptical age, we still use magical thinking.” Astrology is such a booming trend right now that almost seems self-evident. The magic of the past, though, could be a bit more gruesome.

Below is a selection of the Ashmolean’s macabre magical items.

In the 16th century, the line between magic and medicine was thin, and this gorgeous device was used to determine the best times to treat patients with purges, bleedings, and baths. It factored in the stage of the moon’s cycle, the signs of the zodiac, the months of the year, and the man in the moon to figure out how to balance a patient’s four humors and restore health.

John Dee was one of the best known magicians of the 16th century, and it’s said he used this crystal to tell the future and cure disease. According to his own account, the angel Uriel gave him the crystal, along with a recipe for the Philosopher’s Stone. Using crystals in this way was illegal, but Dee got away with it. The crystal was lated gifted to another alchemist, who stopped trying to use it in 1651 “when he believed a demonic ghost burst out from it,” the Science Museum of London notes.

As gnarly as this object is, it actually represents an attempt at counter-magic—protection from dangerous witches. This was found in the 1860s in the chimney of a house at Shutes Hill Farm, in Somerset, England. Often objects like this one would be planted at the vulnerable exits and entrances of homes to keep witches out.

Another form of counter magic. If a witch was threatening you, the defense was to create a “witch bottle,” to attract and capture the witch and her evil energy. Often these bottles were filled with wine or seawater to drown the witch, pins and needles to impale them, and herbs to repeal them. One analysis of a witch’s bottle revealed that it contained urine, iron nails, brass pins, clumps of hair, fingernail clippings, and perhaps bellybutton lint. The woman who donated this particular bottle to a museum noted, “They do say there be a witch in it and if you let un out there it be a pock o’trouble.”

Like the ghirlanda, the witches’ ladder was an instrument of death and illness. Each knot would contain a feather and a curse. This one was found in the roof of a house in Somerset.

At Romagne 14-18, visitors are encouraged to touch and even rearrange the objects on display.
magicnewsmuseums

Cook your way through the "Reclamation" exhibition of crowd-sourced recipes, remedies, and magic.
museums

Why an English Museum Has a Collection of Magic Potatoes

Touch of the rheumatiz? Try carrying around a purloined spud.
museums

After a fire tore through the institution, visitors' images have become an informal archive of its collections.
museums

These beacons are broken, and yet it's now possible to see what they once would have looked like.
Video

06:59
Sponsored by Visit Seattle
Want to see fewer ads? Become a Member.
From Around the Web
Atlas Obscura Trips
Southern England: Lore of Dartmoor
View This Trip
Thanks for sharing!