Possessing any part of a migratory bird is a felony punishable under the Migratory Bird Treaty Act of 1918, and a single violation could cost you up to $2,000 or two years in prison. While thankful for these strict laws protecting wildlife, we were delighted by the menagerie we discovered in Allis Markham’s freezer. As a taxidermist employed by the Los Angeles Natural History Museum (NHM), she’s licensed to work with all manner of exotic and rare specimens. 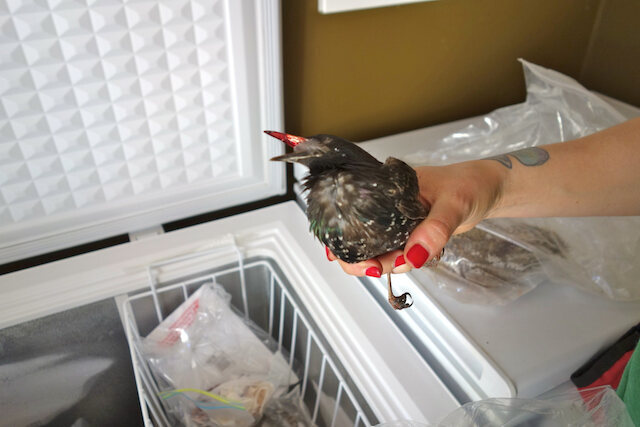 Allis holding a European starling. In the depths of her freezer are hummingbirds, songbirds, baby arctic foxes, warthogs, a jack rabbit, a baby skunk, a large female raccoon, crows, squirrels, and roadkill from Griffith Park.

Allis’ background is in anthropology and fine arts. After collecting and restoring taxidermy for many years, she decided to attend the Advanced Taxidermy Training Center in Montana. She received her Gamehead Mounting Certification 2010 and soon thereafter, became a taxidermy volunteer at NHM. Today, she is thrilled to be working full-time at the museum under “Master Taxidermist” Tim Bovard.

Animals taxidermied by Allis for the NHM collection, including a falcon, a juvenile starling, a raven, and a skunk created for the upcoming exhibition, Becoming LA. The ring-tailed lemur was created by her boss, master taxidermist, Tim Bovard. Other objects include, a tanned bobcat skin, glass eyes, a coyote skull, and a cougar mouth set.

On April 6, Obscura Society LA visited Allis Markham at her home studio in Hollywood, California. Arriving at her Craftsman-style bungalow, we were greeted by her husband David and dog Bacon and welcomed into their home. Munching on Girl Scout cookies and sipping red wine, we settled in for an evening discussion on DIY taxidermy, museum best practices, and NHM behind-the-scenes insights. Who knew that the elephants in the Mammal Hall used to have animatronic flapping ears?

Here are a few of the highlights: 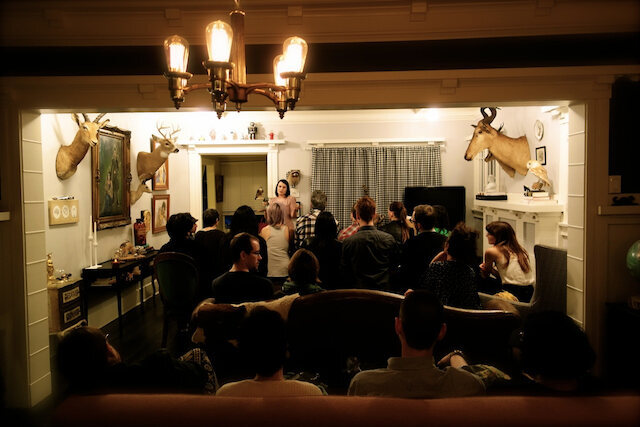 Allis explains the guiding principles and best practices of taxidermy. 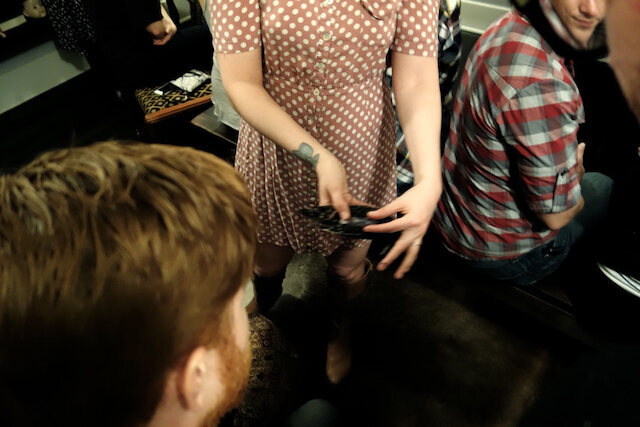 A European starling that has been partially skinned. Allis is demonstrating how the skin separates from the muscle. This particular specimen was killed by a falconer who was hired by a local vineyard to cull the population feasting on their grapes. 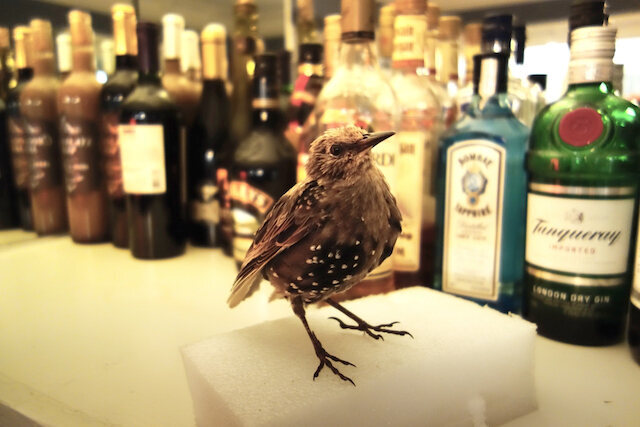 A European starling taxidermied by Allis for the NHM.  She explained that, before beginning a project, she collects as many reference images as possible describing the age, sex, demeanor, and the environment of the specific animal. Even the lighting of the diorama must be determined in order to accurately represent the dilation of the eye pupils! For this juvenile starling, she wanted to convey a “young bird who is scrappy and hungry.” He is positioned on the ground, half looking up, about to hop towards you. 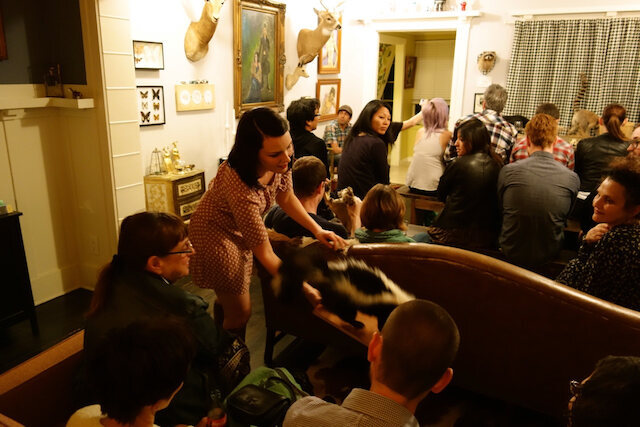 Allis’ skunk will be featured in the upcoming NHM exhibition, “Becoming LA.” He is nearly completed, but still needs lead ear liners and paint on the nose and lips to give a moist appearance. Mod Podge is her preferred sealer, providing the perfect amount of gloss and texture. 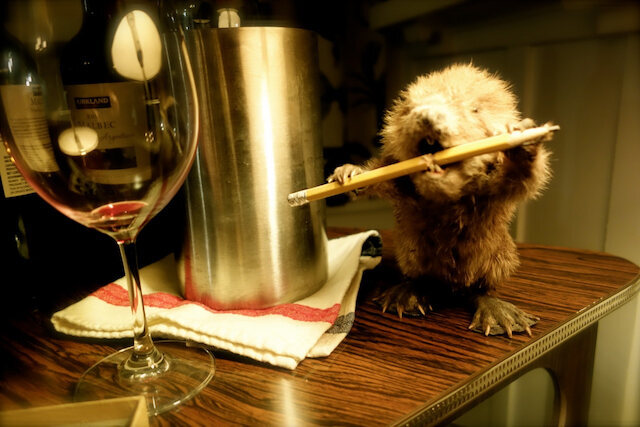 From Allis’ desk at the NHM — a baby beaver! 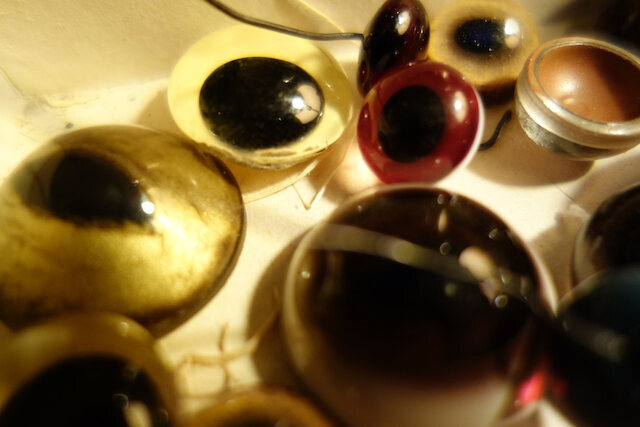 Glass eyes are used in most taxidermy because real eyes don’t retain color and are primarily water. At the museum, they hand-paint some of their own eyes or order from a company such as Tohickon 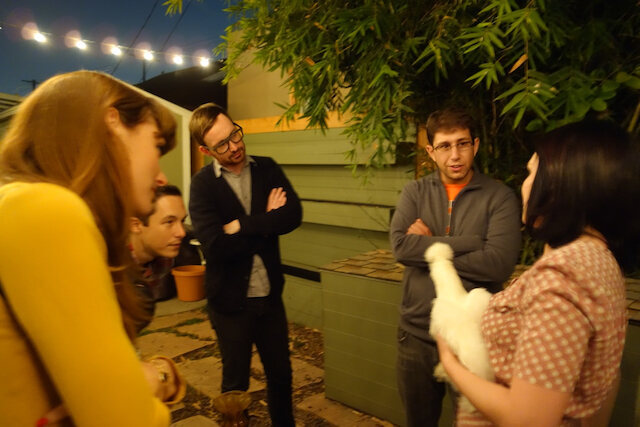 Surrounded by animals live and dead, it’s clear that Allis’ passion for taxidermy grows out of her deep respect and love of nature. Putting her chickens back to bed, we ended another intriguing Society Adventure, and we’re happy to report that the next time we visit Los Angeles’ famed Natural History Museum, we’ll walk in knowing that there is indeed more than one way to skin a cat; you can perform a ventricle, dorsal, or case skinning.

Thank you, Allis Markham for sharing your private studio and taxidermy wisdom!

See Allis’ work on display at NHM’s Becoming LA exhibition, opening this July! Learn more about Allis at her blog Prey, and join her mailing list to find out the next time she’s teaching a taxidermy workshop.

1. Roadkill is considered the property of California state and may not be collected unless you have a license to do so.

2. Follow your nose, if the carcass smells like rot, it’s probably rotting and won’t make a good mount.

4. Do NOT put the animal in a plastic bag. Bacteria thrive in hot, moist environments, and will speed up decomposition. Instead, keep a bucket of non-iodized salt in the back of your car to pull the moisture out of the carcass.

5. Eviscerate as soon as possible. Stomach acids continue digesting the organs and body, ruining the pelt.

6. Label before putting in the freezer.

Until next time discovering this intriguing world of ours, remember....

If you’d like to be notified about future Los Angeles events, be sure to join our Obscura Society Los Angeles Events Announcement List and join our local community pages on Facebook

Infamous Gate to Hell Found in Turkey, Where It Continues to Breathe Its Deathly Air

The Crucified Sheep, Tattooed Frogs, and Crocheted Skeletons of a Rogue Taxidermy Fair in Brooklyn