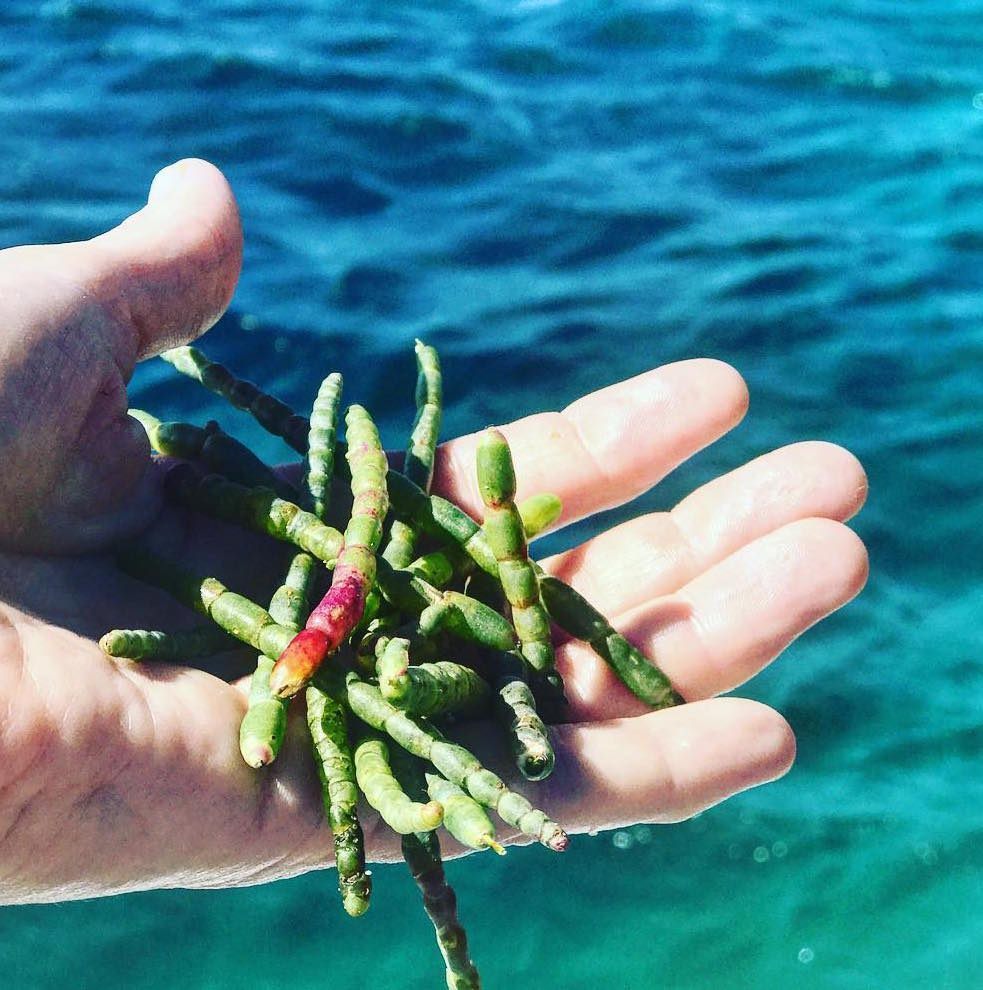 A palmful of samphire, or sea beans. Annagare / Used with permission

This article is adapted from the August 20, 2022, edition of Gastro Obscura’s Favorite Things newsletter. You can sign up here.

On a recent trip to Savannah, Georgia, I splurged on dinner at Husk, a fine-dining restaurant helmed by chef Christopher Hathcock. Of all the dishes I tried, one stood out: a tuna crudo garnished with translucent slices of watermelon radish and samphire.

The samphire had a jolt of flavor; I’d also stumbled across it growing wild on one of Georgia’s barrier islands just the day before. Sometimes known as “sea beans,” it grows wild throughout salt marshes around the globe. It’s delicious, but until recently, the only way to get it was by foraging.

I’d never encountered samphire on a restaurant menu before, but I am willing to bet that we’ll see a lot more of it soon. With natural sources of clean freshwater in increasingly short supply, a number of scientists are banking on sea vegetables as a lower-carbon way to feed a growing world.

While the idea of kelp as the “new kale” might initially sound far-fetched, it makes a lot of sense. Seaweeds and halophytes, or saltwater-tolerant plants, are already a staple food for cultures around the globe. The recipes to prepare sea vegetables already exist—if more people develop a taste for them, it could revolutionize farming.

These under-utilized vegetables often combine tons of flavor with high concentrations of antioxidants and vital nutrients. You can choose to try them because they’re good for the planet—or simply because they’re delicious. Here are a few to look for.

Known as umi-budō in Japan or by their mouthful of a Latin name Caulerpa lentillifera, sea grapes are the ultra-sustainable answer to Beluga caviar.

Culinary Uses: Each briny bead pops in the mouth, releasing a shocking amount of flavor. It makes for a fabulous garnish for sashimi, although it also makes cameos in Filipino and Malaysian cuisine.

Fun Fact: While taste alone would be enough to sell this “green caviar,” it also happens to be rich in vitamins A and C. In fact, sea grapes sometimes go by the nickname “longevity beans” for their popularity in Okinawa, a place with one of the longest average lifespans in the world.

Whether you call them Salicornia, glasswort, sea asparagus, marsh samphire, pickleweed, or sea beans, these bright green succulents are delicious. Since they boast the highest salinity tolerance of any plant, they tend to thrive in saltwater marshes.

Culinary Uses: With a snappy bite and a subtle, saline kick, the “asparagus of the sea” is a delicacy from tables in South Korea, where it appears stir-fried alongside glass noodles in hamcho japchae, to Puglia, Italy, where locals often dress it simply with lemon, olive oil, and perhaps an orb of burrata.

Fun Fact: Sea beans may be a recent addition to fancy tasting menus in the United States, but the Cusabo tribe and other Native nations in North America have eaten it for more than a thousand years.

At first glance, neither the name nor appearance of Irish moss seems terribly appetizing. Ranging in hue from pale green to crimson-tinged black, carrageen, or “moss of the rock” in Gaelic, washes up en masse on the rocky shores of the Emerald Isle. Yet this seaweed’s humble appearance belies just how outrageously useful it can be.

Culinary Uses: Long before carrageenan started appearing in commercial applications, Irish cooks were already using it as a gelling agent in silky, vanilla-scented custards. On Prince Edward Island in Canada, carrageen is the star ingredient in seaweed pie—a fluffy cake topped with Irish moss-thickened cream and berry sauce—while in the Caribbean, it shines in the creamy Jamaican Irish moss drink.

Fun Fact: Once soaked in water, these thick tendrils release a gelatinous substance that makes its way into everything from most commercial ice creams to toothpastes.

Rich in protein and nutrients, this thick bull kelp also happens to be a potent flavor-enhancer—think a natural form of MSG. It grows wild in abundance around the coastlines of Chile and New Zealand, where the Maori people have long used it as a staple food. Archeological findings indicate that the Indigenous people in what is now Chile were eating cochayuyo more than 14,000 years ago.

Culinary Uses: Nowadays, Chileans use the plant’s stems everywhere from salads to ceviches to hearty stews. Cochayuyo can be chopped up and served fresh or dried and allowed to age.

Fun Fact: Curiously, although the scientific name for this kelp, Durvillaea antarctica has “Antarctica” in it, cochayuyo doesn’t appear near Earth’s southernmost continent. In 1892, scientists decided to name the genus in honor of Jules Dumont d’Urville, the French botanist and cartographer who explored Antarctica.

Not long ago, relatively few Americans had heard of samphire, or sea beans. Since Sam Norton founded the world’s first vertical saltwater farm in 2020, in South Carolina, he’s managed to get these succulents in both homes and restaurants in 40 states.

Since its launch, Heron Farms has worked with Husk and other top restaurants in the American South, while helping to restore tidal areas from the Eastern Seaboard to Bangladesh.

Why do you think we should be eating more sea vegetables?
Currently, 98 percent of the water on the planet is salted. Of the 2 percent that’s fresh, half is locked up in glaciers and the rest we’re not using appropriately. Each year, there’s more saltwater and less freshwater. I think that fresh-water-free will be one of the most important product categories this century.

What do you mean when you say fresh-water-free?
Basically, we’re coming up with foods that can be made without access to fresh water. For example, if you fed a chicken on a diet of only halophytes and algae and gave it desalinated water, you could theoretically have a fresh-water-free chicken. It’s still early and people don’t necessarily see the need for this yet, but it’s going to become crucial.

There are thousands of species of halophytes, or salt-tolerant plants. Why focus on sea beans first?
We’ve grown probably between 50 and 75 different species just to see if we can get them to grow outside of the wild. There are many plants outside of Salicornia that people are thinking about. We call it a model species, though, because it has commercially available seeds and it’s the most salt-tolerant.

You’ve mentioned that you’re working with other types of sea vegetables as well. What’s going on with those?
We’re collaborating with NASA right now to determine the viability of halophytes in a lunar setting. NASA would like to have a lunar base. It just makes sense that astronauts feel better when they eat living plants. What most interested NASA was how much of a substrate can we substitute with the loose organic dirt on the moon. We found that halophytes, especially those that live in the most extreme environments, do better than glycophytes, the typical annual leafy greens.

As the fishing industry grapples with declining herring and mackerel, could sausage be their savior?
farms

A revolution in food-growing, home-building, and seed-saving is afoot outside Chiang Mai.
food

The Quest to Make Jellyfish Delicious

Italian chefs are teaming up with scientists to fry, sauté, and pickle the creatures into the food of the future.
Video • Wonder From Home