This Nighttime Drone Shot of a Futuristic City Is Actually a Sea Urchin - Atlas Obscura
Want to see fewer ads? Become a Member. 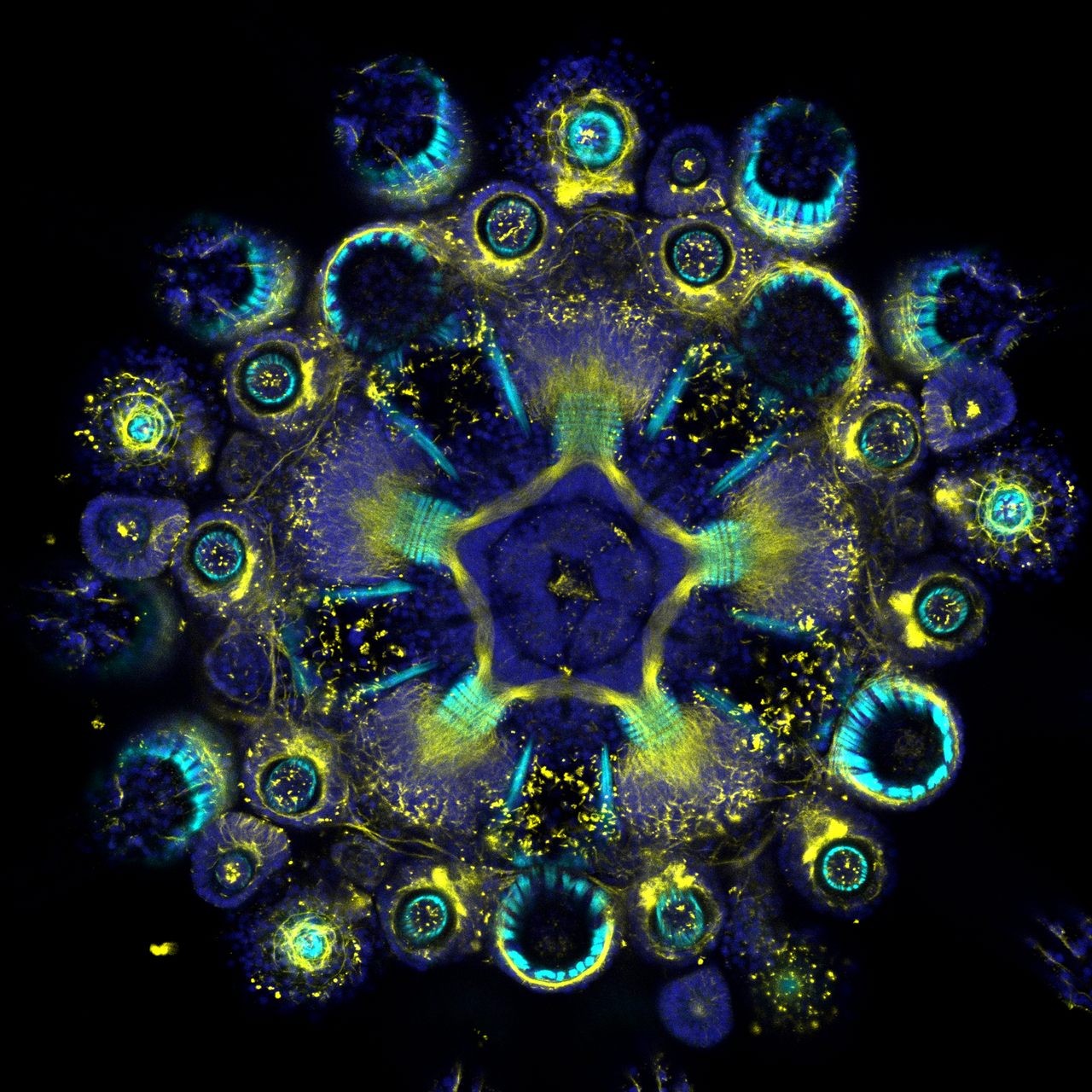 A cross-section of a juvenile sea urchin reveals its neural network in yellow and muscle fibers in bright blue. Laurent Formery/Courtesy Olympus Image of the Year Competition
In This Story
Destination Guide

You’ve probably never seen a sea urchin like this. This cross-section of a juvenile purple sea urchin may resemble a drone’s-eye view of a Blade Runner cityscape, but it’s actually a microscopic image created through a method called immunofluorescence. This technique allows researchers to stain molecules with fluorescent dyes, illuminating and differentiating the various networks within an animal. (Here, for example, muscle fibers appear in cyan, or bright blue, while the nerves are yellow.) And then they’re able to follow that entire yellow nerve network throughout the animal’s body (as in the video below). This kaleidoscopic effect is useful for learning how organisms develop, both as individuals and as a species—and it could give researchers insights into how our own species evolved.

“Echinoderms—sea urchins, sea stars, sea cucumbers, brittle stars, and sea lilies—are fascinating animals because, although they are evolutionarily quite close to us, they could not look more different,” says developmental biologist Laurent Formery, who captured the colorful cross-section as part of his dissertation on echinoderm nervous systems. That research, published in 2020 in the Journal of Comparative Neurology, is an important early step on the road to understanding how and why sea urchins and other echinoderms evolved their distinctive anatomical features.

For example, unlike mammals and many other animals with body plans based on bilateral symmetry—two halves make a whole—sea urchins and other echinoderms have pentaradial symmetry: five similar pieces arranged around a central axis, including a nervous system featuring a central nerve ring with five radial nerve cords that run from the bottom to the top of the creature’s body.

“We still don’t understand how the nervous system of these animals is wired, and how it is working,” says Formery, who is now a postdoctoral researcher at the University of California, Berkeley. “It’s still debated whether they have a central nervous system, like us, or whether their nervous system is just the sum of their parts but lacks a centralized control.”

This particular specimen—so tiny that several could fit on the head of a pin—was spawned and raised in a lab, but has a fashionable pedigree: It’s the progeny of adult sea urchins collected from the bay of Villefranche-sur-Mer, in the French Riviera, says Formery. There, its species, Paracentrotus lividus, is abundant. It’s happily eaten by locals and tourists alike, and much less happily stepped on, accidentally, along rockier stretches of coastline. Like other sea urchins, P. lividus doesn’t sting like an insect would, but its needle-like spines can cause a painful wound that can easily get infected (only a few sea urchin species are venomous).

Sea urchins are popular organisms for researchers to study because there is already a large amount of information available about them, including their entire genome. Formery, whose fluorescent sea urchin image received an honorable mention nod in the 2020 Olympus Image of the Year competition, now studies the same research questions in other echinoderms to learn what their five-sided body plan may have in common with two-sided species, including humans.

Scientists observing a pod in the wild think the animals may choose specific species for a skin care wellness routine.
science

Sun Glint, Bane of Scientists, Has a Silver Lining

This beautiful, satiny optical phenomenon can wreck satellite imaging, but it can also reveal hidden aspects of our planet.
Video • AO Docs