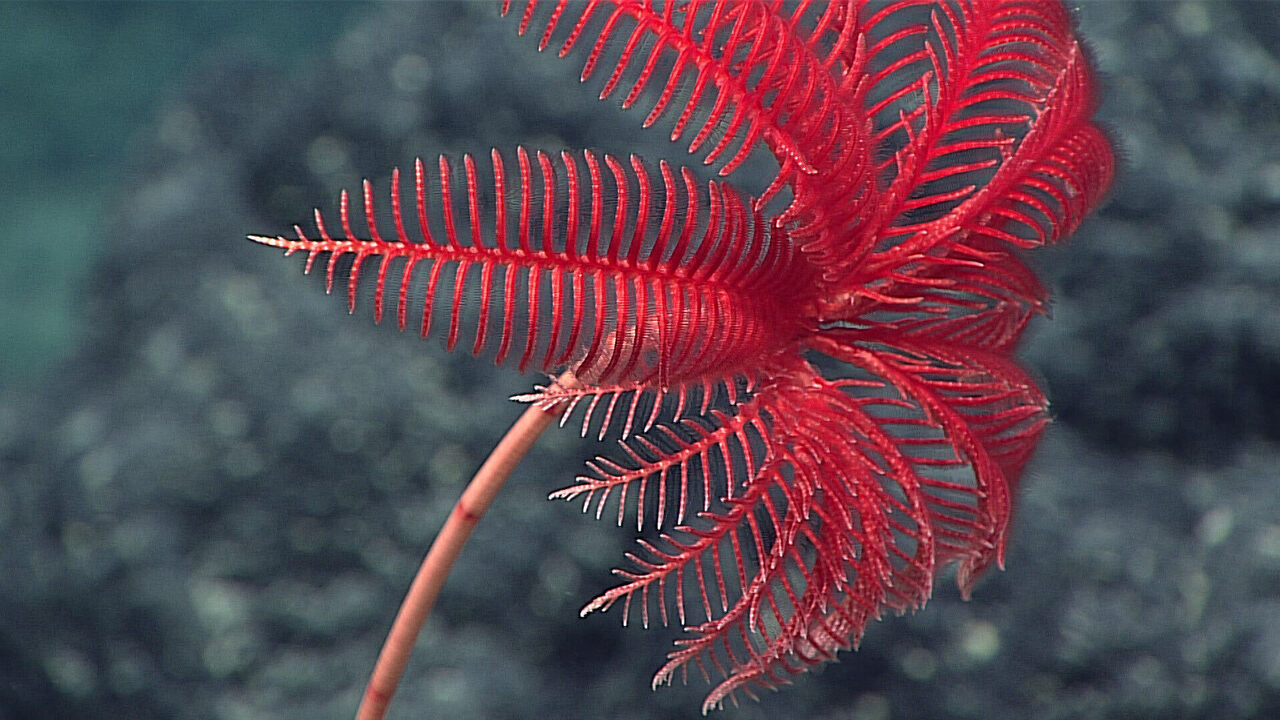 A sea lily, spotted off the Northwest Guam Seamount. NOAA Ocean Exploration & Research/CC by 2.0
In This Story
Destination Guide

In the early 1980s, Tom Guensburg was working as a geologist for Getty Oil, but he was thinking like a paleontologist. Getty had a private geological library, and one day, while poring over a geologic map of Utah,Guensburg spotted what could be a gold mine for fossil hunters. He’d noticed an area in the Great Basin with extensive swaths of ancient, fossil-studded rocks. He didn’t know exactly what he was looking for, only that he might find something extraordinary. “Of course, this was a gamble,” he says. “But it paid off.”

Guensburg, who returned to academia and is now a research associate at the Field Museum in Chicago, has prospected the lands of the Great Basin in a series of visits from the 1980s until the present. On several of these trips, he collected specimens of crinoids, often called sea lilies, with unusual arms. Modern sea lilies resemble flowers fastened to the seafloor, crowned with a pinwheel of frilled arms, but researchers have never known exactly how the lilies evolved from earlier, armless echinoderms, a phylum that includes starfish, sea urchins, and sand dollars. Guensburg’s unusual specimens, which he deemed Athenacrinus broweri, helps solve that mystery, according to a recent paper in the Journal of Paleontology*.

As soon as Guensburg left Getty Oil, he convinced Daniel Blake, his former advisor and a paleontologist at the University of Illinois, to join him on a road trip to Great Basin National Park. The dry and mountainous wilderness, which crosses from Utah into Nevada, is a cragged kind of beautiful: towering mountains approximately 13,000 feet high, ancient bristlecone pines, and fossilized sea creatures dating back to 480 million years, when Utah was a shallow tropical sea. As soon as the duo got to Great Basin, they knew “there had to be some good stuff,” Guensberg says.

Guensburg returned to the site a handful of times over the next decade, venturing into empty land in the high desert populated not by people but coyotes, jackrabbits, and golden eagles. “It’s really the middle of nowhere,” he says. The closest town, Baker, Nevada, is 60 miles away and has a single restaurant. “If you get into trouble, there’s nobody to get you.” Over the years, he collected six specimens of the ancient sea lily he would come to call Athenacrinus broweri. The oneGuensburg remembers best was nestled in some exposed rocks on the other side of a mountain ridge. He wrapped it in paper towels and stashed it in his pack.

Guensburg didn’t realize what he had found until he returned to the Field Museum. He had uncovered a dismembered crinoid fossil, a seemingly common find. Crinoids, which are made of connected calcite plates, are especially tricky to track down in the fossil record, because the animal’s plates separate after death. Some of these plates—such as the circular disks in a crinoid’s spine—look like little more than miniature Cheerios, meaning that you need to know what you’re looking for. But this fossil stood out because of the unusual structure of its arms, which contain skeletal plates in internal cavities.

Scientists have spent a lot of time debating the evolutionary roots of sea lilies. In 1846, scientists proposed that they must have descended from ancient creatures called cystoids, which also looked like stalks with arms,Guensburg says. Over the next century, some scientists disagreed, chalking up this physical resemblance to mere coincidence. But over the years, studies have kept this early theory alive by cherry-picking certain fossils, Rich Mooi, an echinodermologist at the California Academy of Sciences and a co-author of the paper, writes in an email. “This debate has dominated echinoderm paleontology for well over 100 years,”Guensburg says. “We’re now saying that’s wrong.”

The new study proves that early sea lilies did not descend from cystoids. “This tears off one branch in the tree of life and rearranges it another way,”Guensburg says. Though cystoid and sea lily arms may have resembled each other on the outside, their internal structures are wildly different. These two creatures evolved to look similar, perhaps because they both survived by grabbing food that floated past.

The journey to understand Athenacrinus broweri lasted more than a decade.Guensburg even traveled to Argentina and Siberia in search of similar fossils in similarly-aged rock, though that didn’t pan out. “We spent three weeks floating the river in the coldest inhabited place on earth and found nothing,” he says. “I would not recommend that for anybody.”

As it turned out, Utah had held the key all long. Guensburg was last there three years ago, and plans to return soon, to look for new fossils. He doesn’t know exactly what he’s looking for, but he knows he’ll find something.

* Update: This story was updated to include the name of the Journal of Paleontology.

Toward a Better Understanding of South Asia's 'Living Bridges'

Found: A Fossilized Fish in a Monastery Flagstone

A 10-year-old boy on a tour spotted the fossil and reported it to a local museum.
antarctic

The fossil record of the southern continent has much to offer.
antarctic

Clinging to the underside of ice hundreds of feet thick, strange communities eke out a living, while researchers race to study them before they disappear.
Video • Object of Intrigue

2:48
Want to see fewer ads? Become a Member.
From Around the Web
Travel With Atlas Obscura
Are you a curious traveler?
Join local experts in 50+ destinations for a once-in-a-lifetime journey.
View Our Trips
Thanks for sharing!