Scottish Authorities Are Trying to Reunite a 'Witch' With Her Skull - Atlas Obscura
Want to see fewer ads? Become a Member. 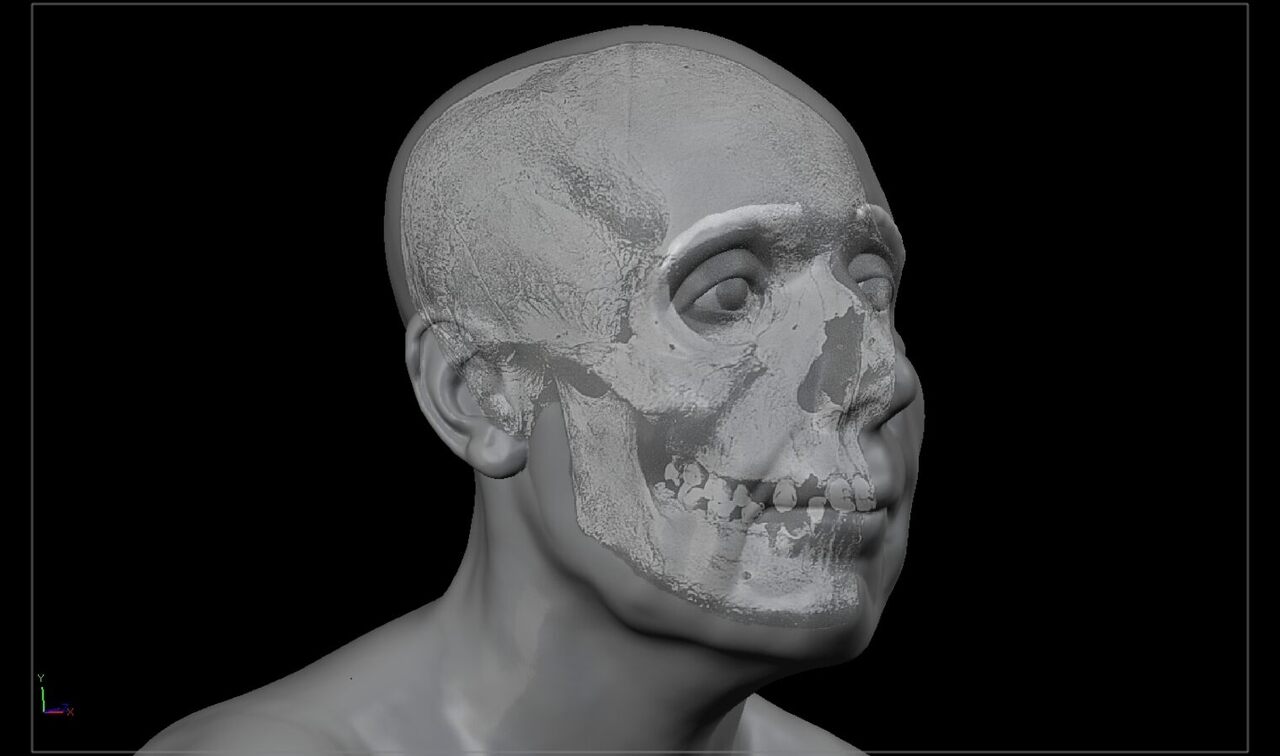 The skull of Lilias Adie, an accused witch, is superimposed over her face in this 2018 reconstruction by forensic artist Christopher Rynn. The University of Dundee
In This Story
Destination Guide

Most of a woman accused of witchcraft is lying there, beneath a slab of stone on a beach in the Scottish village of Torryburn. Her name was Lilias Adie, and her body has been in this lonely coastal grave—the only interment for an accused witch in all of Scotland—for centuries.

As Douglas Speirs, an archaeologist in Fife, recently told the CBC, Adie’s grave was opened in 1852 at the command of a local antiquarian and phrenologist named Joseph Neil Paton, who wanted to study the skull of a witch. But after the bones were exhibited in 1938, they went missing—and haven’t been seen since.

Now, on the 315th anniversary of her death, Scottish officials are hoping to find new information on the whereabouts of Adie’s missing parts. In May, a conference in the neighboring village of Dunfermline sparked new interest in memorializing victims of witchcraft and recovering Adie’s skull. The conference was run by researchers who’ve worked for the past few decades to clarify who and what historical witches truly were: innocent victims.

Lilias Adie died in 1704 in Torryburn, Fife—one of the many victims of a horrific series of Scottish witch trials that ran from 1563 to 1736. “They were imaginary crimes [that people were accused of],” says historian Louise Yeoman, co-curator of The Survey of Scottish Witchcraft at Edinburgh University. “People were tortured, pressured to confess, and then executed.”

There is almost no physical trace of the witch trials today, because the accused were strangled and then burned at the stake after a forced confession. With no bones left behind, the ashes were buried without ceremony near the fire pit.

The nature of these executions makes Adie’s grave unique, Yeoman says. Her bones survived because she died in custody while awaiting trial, after 29 days of incarceration, Speirs told the CBC. One theory is that she died by suicide to avoid a barbaric execution. But Yeoman says it’s just as likely that the poor conditions of the jail are what did Adie in.

Co-curator of a database called The Survey of Scottish Witchcraft, Yeoman is rarely surprised by the cruelty of the witch trials. But she was fascinated by Adie and her story. Armed with a few 19th-century descriptions of where the accused witch was buried—including “the great stone doorstep that lies over the rifled grave of Lilly Eadie [sic]” and a rock with “the remains of an iron ring”—Yeoman and Speirs set out in 2014 to find the woman’s grave. They found a seaweed-covered slab near a railway bridge that fit the description, complete with a small dimple in its center that could have once held an iron ring.

“Her burial was not something I’d seen before,” Yeoman says. Adie was buried on the beach based on a Scottish belief that witches could not cross moving water. In their eyes, the constant movement of the tide would ensure that she stayed in her grave. For added precaution, they placed a large stone slab over Adie’s coffin. These practices were common for victims of suicide, as people believed that such deaths could result in revenants—corpses that rose from the grave to torture the living.

“In medieval times, people believed in corporeal ghosts,” says Yeoman. “Like a ghost that could hit you with an axe.”

Lilias, who was in her 60s when she died, was accused of having sex with the devil. “It’s a standard crime,” Yeoman says. “It sounds bonkers, but the idea is that instead of seeing Jesus as your husband, you’re doing naughty things with the devil.”

Like most people accused of witchcraft, Adie’s confession came after seven interrogations interspersed with torturous sleep deprivation. At that point her health was failing, compounded by poor conditions in the prison.

To Yeoman, the tragedy of Adie’s confession has a modern resonance. “It’s a horrifying miscarriage of justice, being tortured and pressured to confess,” she says. “But a lot of those things still happen.”

Adie’s grave was first disturbed in the 19th century, says Yeoman, when people dug up her bones on Paton’s orders. They also stole pieces of her wooden coffin, part of which was later fashioned into a walking stick for Andrew Carnegie, who was born in Dunfermline. Adie’s skull wound up at St. Andrews University Museum, where it was studied and displayed at the 1938 Empire Exhibition in Glasgow. But after the exhibition was decommissioned, Speirs writes in an email, the skull was never seen again.

Yeoman’s best guess is that it has simply been misplaced. “It’s probably in somebody’s attic or cupboard,” she says, “perhaps of a family with connections to St. Andrews University.”

Luckily, St. Andrews photographed the skull before it was displayed. In 2018, Christopher Rynn, a forensic artist at the University of Dundee, was able to reconstruct Adie’s head as a 3D virtual sculpture—the first time anyone has seen the face of a Scottish woman accused of witchcraft.

On August 31, Fife held a memorial service for Adie to highlight the history of witch persecution, according to The Scotsman. The vast majority of victims—83 percent—were female, though some men were killed for supposedly being warlocks.

Fife authorities launched the campaign to find Adie’s missing skull the week before the memorial service. There are also plans to erect a national monument to honor everyone in Scotland who has been executed as an accused witch, Fife Councilor Kate Stewart writes in an email.

Speirs says that authorities in Fife hope to build a memorial trail from Culross to Torryburn in remembrance of witchcraft victims. The trail would stop at three points: first in Culross (a one-time witch-hunt hotbed), to memorialize all the women executed for witchcraft; then at Valleyfield, in the spot where Adie was accused of meeting and dancing with the devil; and finally at her intertidal grave.

It’s still there today, lapped by the tides and waiting for Adie’s skull to be returned.

The Affair of the Poisons was one to remember.
science

How to Make Sense of a Mass Grave

A fascinating case study from the Thirty Years' War.
graveyards

When a Philadelphia construction company dug up an old cemetery, local archaeologists stepped in to help—because there was no one else.
objects of intrigue

Cornell's witchcraft collection has an original copy of the Malleus Maleficarum, an early witch-hunting handbook.
Video • Wonder From Home

Soon you'll be able to visit the Anna Göldi Museum year-round.
Read more
Thanks for sharing!