These Carved Camels Are the Oldest Life-Sized Reliefs in World - Atlas Obscura
Want to see fewer ads? Become a Member. 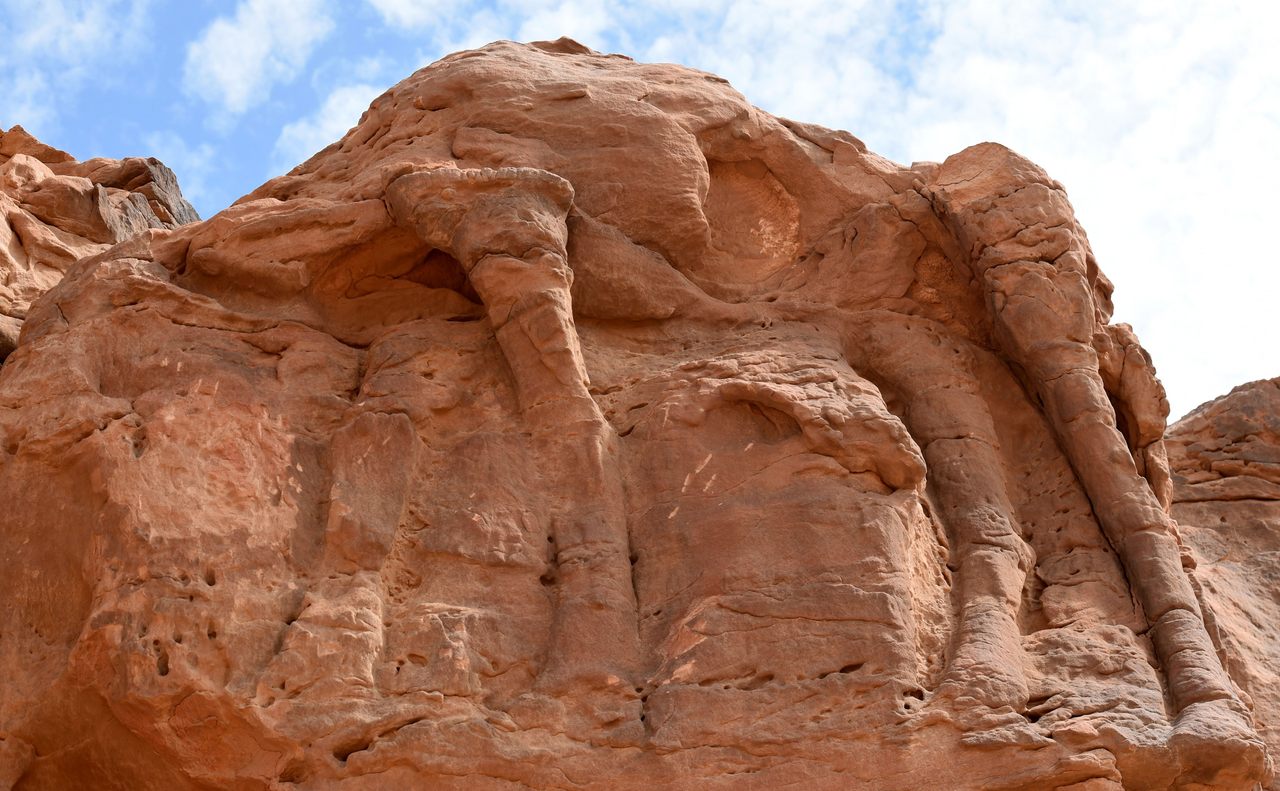 Archaeologists believe the life-sized camel and equid reliefs were likely carved and recarved throughout the Neolithic. FAYEZ NURELDINE/Getty Images
In This Story
Destination Guide

Deep in the northern Arabian Desert, in a sleepy farming community, huge red boulders rise out of the sand. The farmers already knew that the boulders abutting their fields were something special. When they looked closely at the towering rock edifices, they could just make out enormous, life-sized carvings of camels and hooved, horse-like animals. For millennia, the site has sat largely undisturbed, except for the occasional rooster crowing or dog barking on a nearby farm.

In 2010, the site came to the attention of Hussein al-Khalifa, the former director of Saudi Arabia’s General Authority for Tourism and National Heritage. Khalifa immediately saw that the site is exceptional. After eight years of pushing for it to be formally studied, he and a team of experts went to examine the site in detail in the fall of 2018. That initial study determined that the site was carved some 2,000 years ago.

But now new work shows that the camels are even more special than was once thought. The new study, in the Journal of Archaeological Science, has found the carvings are actually more than 8,000 years old, making them the oldest large-scale animal reliefs anywhere in the world. The lead archaeologist on the study, Maria Guagnin from Germany’s Max Planck Institute for the Science of Human History, says the finding is “incredible.” While other older, smaller reliefs can be found in France and Germany, “the difference with these camel carvings is not only are they big, but they are high up on the escarpment and so as you were carving it you were never able to see the whole animal,” says Guagnin. “From a technical perspective, that’s a lot more challenging.”

A total of 21 camel and equid reliefs prance about the red rock boulders in the sleepy village. Some 8,000 years ago in the Arabian Peninsula, camels still roamed wild. It wasn’t until 1200 B.C., experts believe, that camels were domesticated. “Today we know nothing about wild camels,” Guagnin says. The team guesses that the bulging necks seen on the carved camels (typical of a male camel in rut) and rounded bellies indicate either “fertility or the seasonal lushness of the vegetation,” says Guagnin.

Accurately dating rock art is notoriously difficult, especially at a site as old as this one. Erosion and exposure to the elements often wear away indicators of a rock’s age. Guagnin says she and her team used all the dating technologies available to them—old and new—to pull off the study.

They brought out a masonry specialist to look at the ancient tool marks on the reliefs. “Initially, we thought [the carvings] were so sophisticated they must’ve had really advanced tools, and it turns out they didn’t,” Guagnin says. “They used stone tools.” The team even found some of those stone tools scattered around the site.

Meinrat Andreae from the Max Planck Institute for Chemistry also came to the site with a portable X-ray fluorescence spectrometer. This cutting-edge technology measures the varnish buildup on rock surfaces to date sites. Both tool marks and the spectrometer suggest the site is over 8,000 years old. Guagnin says her first reaction to the news was, “Wow! This is pretty amazing.”

At the time, the Arabian Peninsula would have been much greener than it is today, with “a lot more grasslands and a lot more seasonal lakes in the Nefud desert,” where the reliefs were discovered. The landscape could also go through years-long droughts. “It was a green but not unchallenging environment,” says Guagnin.

The people who lived there would have been highly mobile, and while there was some domesticated livestock, hunting was still an important food source. “We did find arrowheads at the site, so presumably they engaged in hunting while they were [carving],” Guagnin says.

For Tahani Almahmound, a rock art specialist and heritage compliance manager with the Royal Commission for AlUla, the new find is only “a small percentage” of Saudi Arabia’s ancient treasures. “Every time we discover a new area, we find some archaeology, some ancient evidence about human activity from thousands of years ago,” she says. Sites such as the camel reliefs are often very difficult to get to, and are usually discovered far from roads or towns. Almahmound, for one, is determined to “keep looking for other sites” hidden by both time and desert.

If it weren't for aerial surveys and lidar imaging, Aguada Fénix might never have claimed the superlative crown.
art

It depends on whether a natural process could explain them.
dinosaurs

He may soon be replaced by another Big Thing, or a small swing.
deserts

5:52
Want to see fewer ads? Become a Member.
From Around the Web
THE GASTRO OBSCURA BOOK
Taste the World!
An eye-opening journey through the history, culture, and places of the culinary world. Order Now