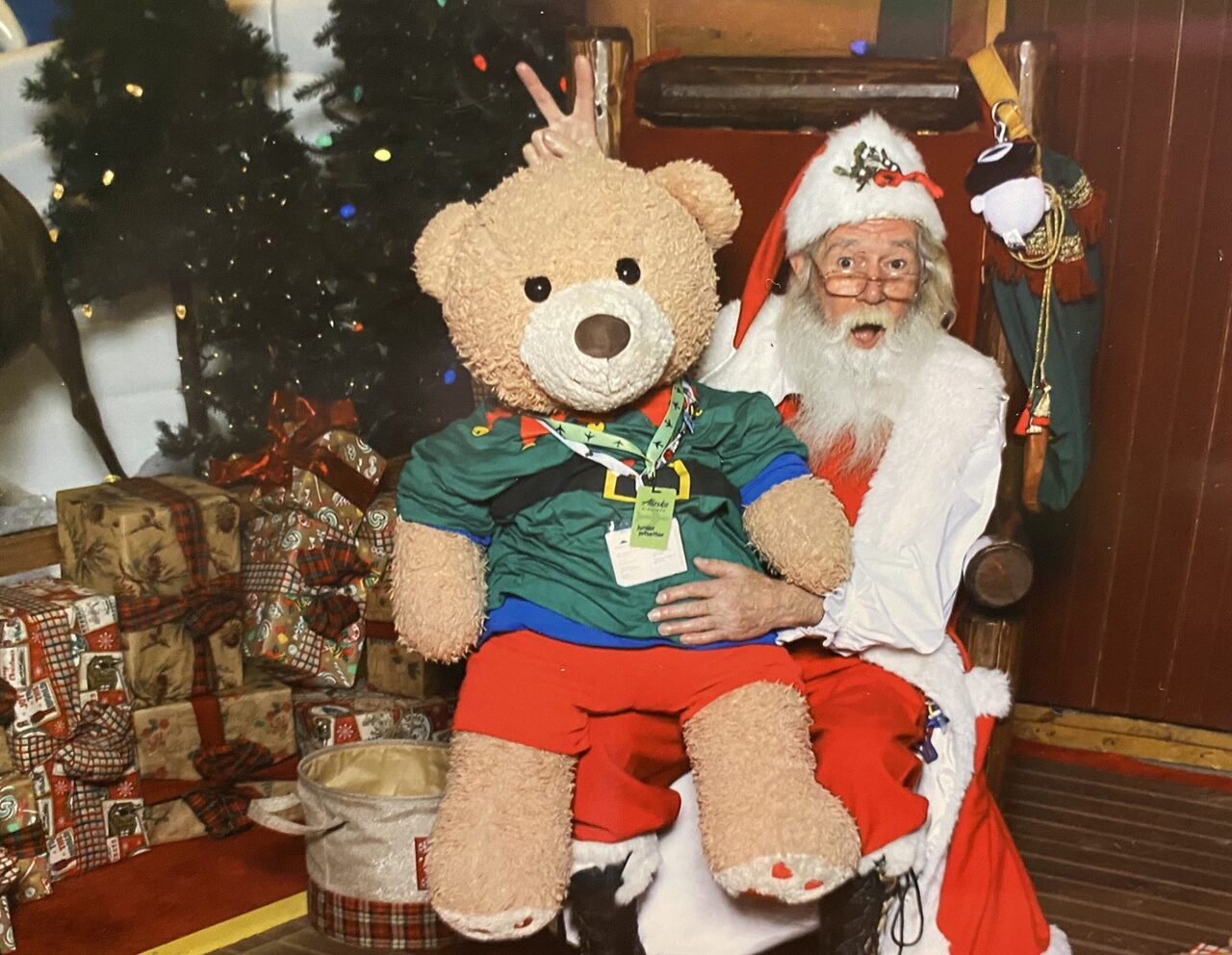 Kudla says he can spot plain-clothes Santas when he travels. "There's a look in the eye and you can tell." Courtesy Paul Kudla
In This Story
Destination Guide

Ask anyone in Nome, Alaska (population 3,841) for the name of the bearded gentleman who digs the graves and drives a city truck, and they’ll tell you it’s Santa Paul.

For six weeks a year Paul Kudla is a contract Santa. Over the last 12 years, he’s donned the red suit and held court in sporting good stores and shopping malls across the United States.

The rest of the year, he works as a cemetery caretaker and truck driver in Nome, a town on the Bering Sea, inaccessible by road, that’s known for being the far-flung finish of the Iditarod sled dog race.

When his local newspaper shared a picture of him shoveling snow on Facebook, they captioned the snapshot “Santa Paul.” Naturally, when he answers his phone he says, “This is Santa Paul.” If you get his answering machine, a high-pitched elfin voice will say, “Santa left me on the workbench. I’ll let him know you called.”

Clearly, Kudla takes being Santa seriously. And it pays off: he’s in demand. Right before the 2019 Santa season kicked off, Kudla and nine other Santas from around the world toured around Japan, doing photo ops everywhere from hospitals and schools to the subway and a Toys ‘R’ Us. He’d been invited by a fellow Santa he met while competing at the Santa Winter Games in Norway and again at a convention in Kyrgyzstan.

“I like going to gatherings of Santas,” Kudla says. “It’s a fun community, we call ourselves the ‘Brothers in Red,’ but I’m the only one where I live.”

Despite being so far from his pearly bearded peers, Kudla is fairly well-known. In 2015 he won the title of America’s Best Santa on the TV competition show Santas in the Barn, where he competed against nine other diverse Santas in contests ranging from speed present wrapping, building gingerbread houses on ice, and Christmas song knowledge (his weakest category—he doesn’t care for holiday music). He ended up beating out the Surfing San Diego Santa on the final episode, broadcast on Christmas Eve. The title netted him $100,000 in prize money and $10,000 for Make-A-Wish, his charity of choice.

Though his two seasonal roles may seem like polar opposites—one spreading the holiday spirit to young boys and girls, the other spreading dirt over the final resting place of deceased locals—Kudla says they have one thing in common: they both provide comfort to others.

“Both jobs have turned out to be so rewarding,” Kudla says. “They both add to better experiences.”

There hadn’t been a caretaker at the cemetery for over 30 years before Kudla got the job. The land, Kudla says, was completely overgrown. Grass had grown several feet long, tree limbs had buried themselves in the earth, and grave markers had gone missing. In his early days on the job, the digging of a new grave would be interrupted when it became apparent someone was already interred there.

“The cemetery has a whole new look now,” Kudla says. “I really cleaned up the original part and recently the city bought another 11 acres adjacent to the old cemetery, so I’ve been working on leveling it out and making it look beautiful for the locals and the Great Spirit. It’s become a nice place to be.”

There is a limited window for burial in the Arctic—eventually the tundra gets too frozen to dig, even with an excavator. During the shoulder season between grave digging and professional ho-ho-hoing, Kudla drives trucks and operates heavy machinery for the city.

He spends his free time tinkering in his workshop, where he repairs sewing machines that are over 100 years old and crafts his extensive collection of Santa regalia. “I Santa-ize all my clothes,” Kudla says. “I’m finishing a jacket I made out of muskox. I look huge in that thing. I have a golden moose hide and a pure white buffalo hide that I’m saving—those need to be for something special. I have a vision of a duster coat with fur trim and a half cape in red leather. I just made a Russian Army officers hat Santa-fied.”

Kudla, who is naturally slim, wears a gel belly at gigs. “I tried the pillow thing, but kids know,” he says. “It doesn’t move right.”

Winter 2019 is Kudla’s first time staying in Alaska for the season, splitting his time between hunting-and-fishing outfitter Cabela’s and a Bass Pro Shop in Anchorage, the state’s most populous city. The agency that sets him up with his winter gigs, Nationwide Santas, knows that he likes to go somewhere warmer and with more daylight—his hometown receives fewer than four hours on December days. In the past he’s been stationed in places like Las Vegas, Nevada, and Fort Myers, Florida, but this year he’s alternating shifts with a Santa buddy who has a daughter living nearby.

It’s been a slow season so far, which Kudla thinks is due to online shopping. Still, he says it’s his favorite part of the year and the short lines mean he gets to talk to his visitors for longer.

“There’s nothing like when a kid sees you from down the hall and comes running up to give Santa a hug,” Kudla says. “This job is magic in that way.”

On December 26, Kudla will be back home in Nome until November, dispersing merriment and serenity in a different way: making sure snow is cleared from the city roads and that the grave sites look nice for visitors.

And if any local kids write letters to St. Nick during the off-season, they’ll end up in Kudla’s mailbox. The name on it reads, simply, “Santa.”

Help us keep them coming by directly supporting Atlas Obscura.
Become a Member
$5/month $10/month $20/month
See All Membership Options
Already a part of our membership program? Sign in.
No Thanks
Keep Exploring
libraries

We wish you a mappy Christmas.
libraries

School is in session for gladiators, dead bodies, and Santas.
santa claus

Talking to the Visionary Who Made Santa a Business Man

Does Mrs. Claus Have a Life of Her Own?

Meet the Only Certified Santa in the 'Ho Ho Holy Land'