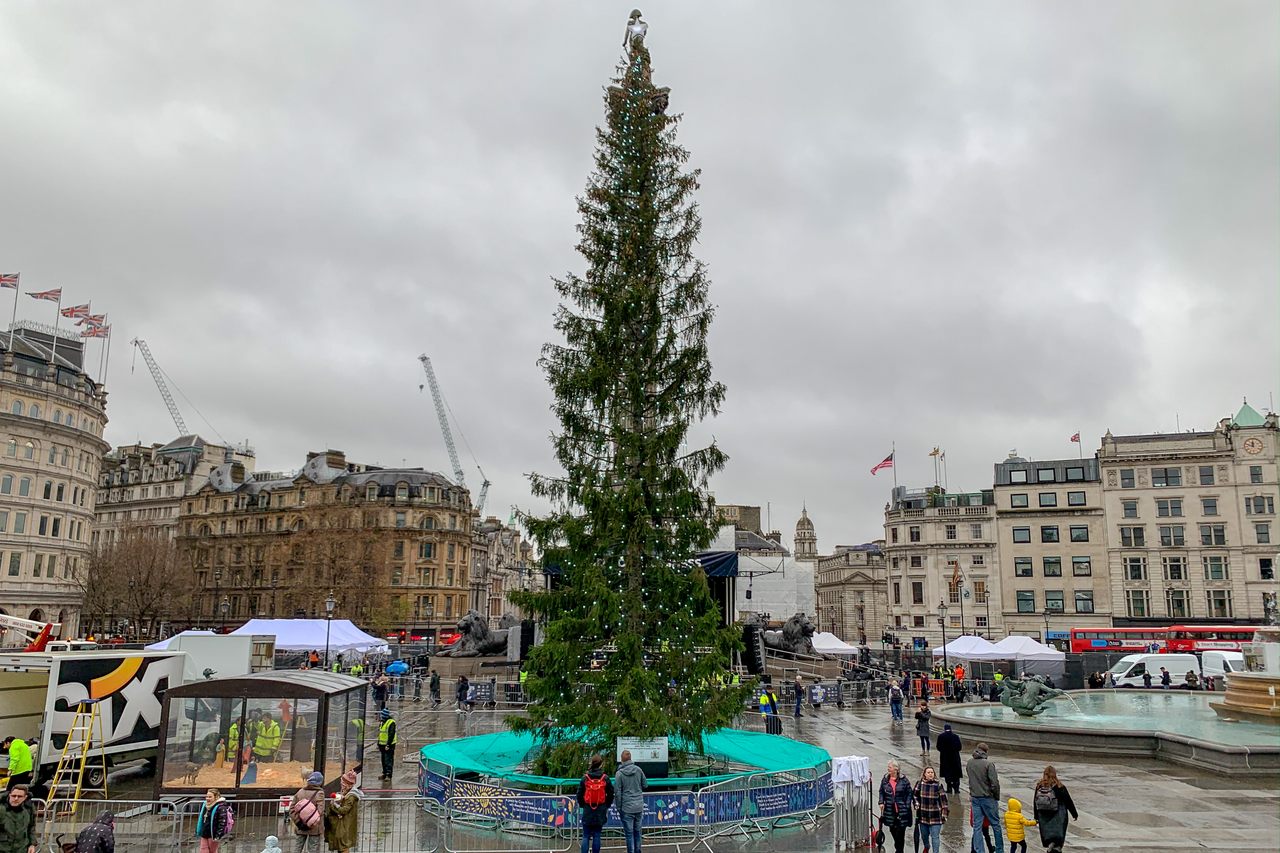 The tree in London's Trafalgar Square is already the butt of jokes. Robin Pope / NurPhoto via Getty Images
In This Story
Destination Guide

Any decades-old tree has probably been through a lot: It has likely withstood droughts, deluges, and a pest or two. The nonagenarian Norway spruce that loomed over London’s Trafalgar Square in 2019 came of age in the woods near a lake called Trollvann, in Oslo. Once it arrived in England, it faced a new threat: being bullied on Twitter for looking less than cheerful.

Every year, Norway gifts England a Christmas tree, in gratitude for assistance in World War II. The 2019 specimen was supposed to delight visitors and draw merrymakers to Trafalgar Square—and while plenty of revelers did stop by, the spindly thing also fended off some grinches, one of whom described the tree as “patchier than my beard,” NPR reported. Several other cities’ evergreen attractions have been the butt of similar online jokes. New York City’s Rockefeller Center tree sometimes doesn’t look so hot, either, and in 2017, Rome’s 72-footer earned the unfortunate nickname Spelacchio, which The New York Times translated as “mangy.” By the end of its run, the tree’s branches looked like the exhausted bristles of a toothbrush destined for the trash bin.

Donald Leopold, a professor at the SUNY College of Environmental Science and Forestry in Syracuse, New York, says there’s a simple explanation: Many big-city centerpieces are wild-grown Norway spruce, which “is probably the single worst species” you could choose.

Generally speaking, any massive, wild-grown tree is going to look rough around the edges compared to one cultivated on a Christmas-tree farm, explains Chal Landgren, a Christmas tree specialist at Oregon State University’s North Willamette Research and Extension Center. On farms, crews limit the height of trees and shear their outer branches, which “helps increase the density by increasing the number of buds on the tree and the number of branches,” Landgren says. That nudges the tree toward the iconic, plump cone shape that celebrators of Christmas have come to expect.

Norway spruce have several particular problems. They’ve got a naturally droopy appearance, almost as if they’re sighing, and like other spruce trees, they readily shed their needles, Leopold says. They’re also not especially tolerant of shade, and when upper branches cast too many shadows on lower ones, the tree can develop a scraggly, uneven shape. “As long as Noway spruces are selected, they’re going to look that way,” Leopold says.

The tree in New York City’s Rockefeller Center is donated, and it’s almost always a Norway spruce. (Anyone can nominate a tree; Rockefeller Center reports that successful candidates are usually at least 75 feet tall and 45 feet in diameter.) The 2019 green thumb, 80-year-old Carol Schultz, told The New York Times that she had whispered words of encouragement to her tree over the years, planting the idea that it could make it big. Leopold suspects that Norway spruce keep showing up because the people who planted them, decades ago, didn’t know what they were signing up for. “They plant these beautiful little pyramidal trees in front of a window or doorway and don’t realize they’re going to become these monster trees,” Leopold says.

The trouble is, once a Norway spruce is cut down, it starts looking pretty bad pretty quickly. The trees are often felled weeks before they’re installed, because it takes a while to lug them to the city and string up thousands of lights. Someone setting up a tree at home would probably make a fresh cut, and then balance the trunk in a little dish of water to stave off needle drop. At the scale of a massive Norway spruce, Leopold points out, that’s not really feasible.

A balsam fir would make for prettier, more fragment tree option, Leopold says, with its tight form and “needles that will last until Easter.” Alas, on America’s East Coast, balsam firs top out around 40 feet tall, Leopold adds, and hauling taller balsam firs or other soaring varieties from out west would be expensive. Landgren says that sparse trees are sometimes padded with additional branches to make them look a little lusher, and trees in public places are occasionally sprayed with fire retardant, which can incidentally “cement the needles to the tree.” Back in 2010, researchers from Nova Scotia Agricultural College and Université Laval experimented with ways to stifle balsam firs’ production of ethylene, a plant hormone that has been associated with needle loss—but Landgren suspects that wouldn’t be feasible in a big, busy space.

The Norway spruce is what it is. Chances are, a huge specimen that winds up as a municipal tree “wasn’t a tree that was developed to be a Christmas tree in the first place,” Landgren says. “It’s going to look scraggly at the beginning, and probably going to continue to look scraggly.” Haters could challenge their hearts to swell a couple sizes, and make peace with the tree’s droopy comportment. “That’s just the way it’s going to look,” Leopold says. “Accept it and enjoy it.”

Every Year, Dresden Kickstarts the Christmas Season With a Four-Ton Cake

Lismore's festive trees are made out of glorious garbage.
trees

After the Holidays, Christmas Trees Have More Work to Do

They're sheltering aquatic species, keeping out invasive fish, and holding beaches and swamps together.
politics

The National Christmas Tree Board was supposed to protect American tree growers, until one man intervened.
santa claus

In the 19th century, the character embodied debates about women’s rights—and occasionally got a sleigh ride of her own.
Video • Gastro Obscura