This Newfoundland Town Is the ‘Root Cellar Capital of the World’ - Gastro Obscura
Want to see fewer ads? Become a Member. 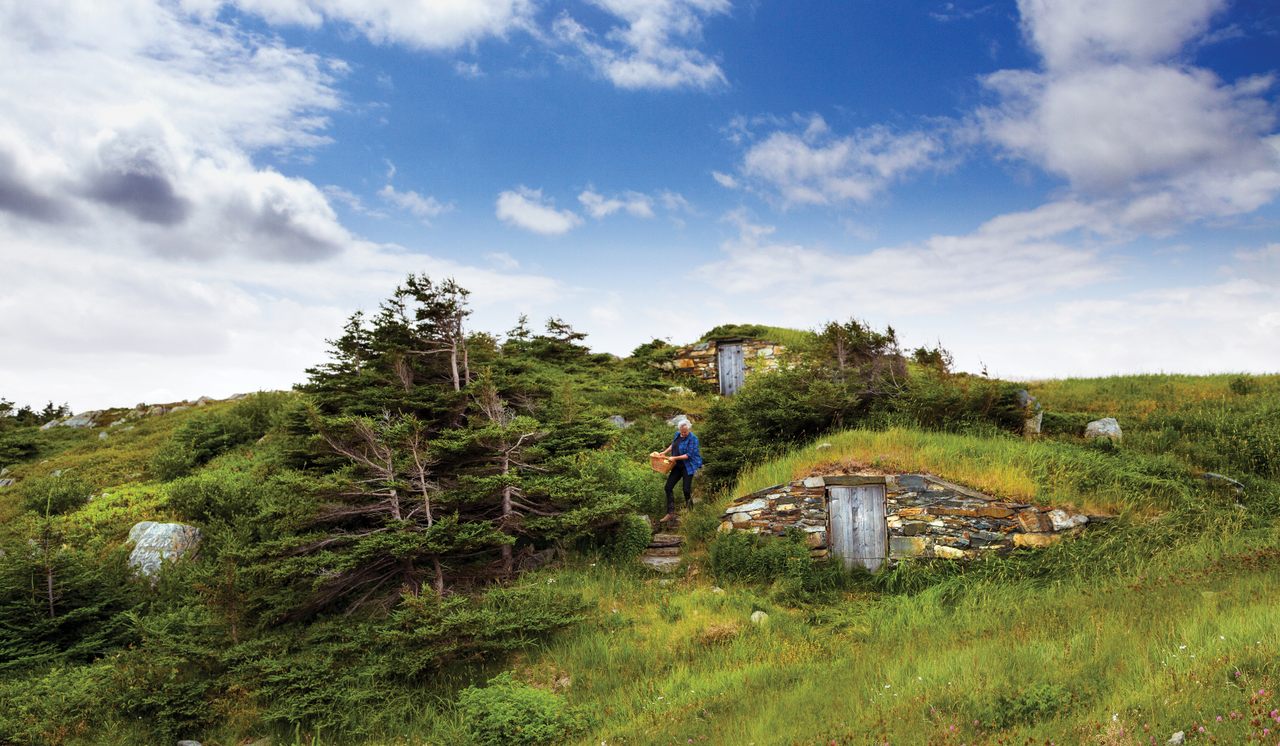 Coming back from the root cellar with a vegetable haul. Newfoundland and Labrador Tourism
In This Story
Place

This small Newfoundland town has declared itself the “Root Cellar Capital of the World.”
Destination Guide

For hundreds of years, Elliston, a tiny town in Newfoundland, Canada’s most eastern province, was a fishing community. And cod was king. To this day, the lean white fish is so central to local culture that “fish” in Newfoundland is simply shorthand for cod.

But the cod couldn’t last forever. In 1992, due to overexploitation, the Canadian government imposed a cod fishing moratorium. Overnight, thousands of livelihoods were wiped out. Many locals left for work in other provinces. The few who stayed behind were convinced the moratorium would be short-lived. It wasn’t. In Elliston, even the street lights flickered out, once there was no longer a large enough tax base to pay the electricity bill.

Faced with one of the darkest periods in the town’s history, Marilyn Coles-Hayley, the chairperson of Tourism Elliston, and a few other residents decided to put some of the legendary Newfoundland bootstrapping spirit to work. “We thought of what we could offer that was unique,” she says. “Number one was our root cellars.”

Visitors passing through Elliston had long noticed the primordial-looking structures dotted throughout the town. Venturing inside your typical root cellar, a small vestibule leads to a door, beyond which is a small, dark chamber redolent of earth and moss. Troughs all along the walls hold root vegetables: potatoes, beets, parsnips, and carrots.

From the outside, the grass-covered mounds with their latched wooden portals seem like quaint homes for hobbits. But for centuries, such cellars kept Elliston residents alive. “Everyone had a cod fishing boat, a subsistence garden where they grew root vegetables, and a root cellar to store them during the long winter,” says Coles-Hayley. “Before refrigerators, root cellaring was essential in winter. Without them, people would not have been able to survive.”

Beyond a mere attraction, locals knew that root cellars could tell the story of Newfoundland, a place where hyper-local food has always been a necessity rather than a lifestyle option. So, in July 2000, they declared Elliston “The Root Cellar Capital of the World.”

Many root cellars received new roofs and concrete reinforcements. According to Sid Chaulk, a volunteer on the restoration team, they restored 43 cellars between 1999 and 2001. Older members of the community provided vital information on root cellar construction. For example, the short corridor, known as the porch, helps keep frost out, as do the doors. “These cellars always have two doors, though some even have three,” he says. “You were taught to shut the first door before you opened the second.”

Even after fridges became popular, the rustic-looking cellars proved to be superior storage facilities. They provide just the right level of humidity to keep vegetables fresh and frost-free for months and months. Due to layers of insulating earth and rock, root cellar temperatures never dip below freezing, and never climb higher than 8°C. Many regional dishes are based around the vegetables stored in cellars: Jiggs dinner, a quintessential Newfoundland Sunday meal of boiled carrots, turnips, potatoes, cabbage, pease pudding, and salt beef, is the most iconic. Bottled moose with a side of boiled root vegetables is another.

Soon after the declaration, a group of Memorial University students undertook to document and map the town’s root cellars. Toronto-raised Crystal Braye, a lead student on the project, had never seen a root cellar before. She recalls spending the summer traipsing around the town, interviewing older members of the community while collecting “measurements and GPS coordinates,” she says. They found 135 root cellars around Elliston (a town of 308 people). The earliest dated back to 1839.

Their study identified five different types of root cellars. Because of its rocky local landscape, Elliston’s root cellars are predominantly the double-door, ground-level entrance variety. Built into hills, rather than dug underground, they were often sealed with moss before the introduction of concrete. Another popular style was the “hatched entrance,” a mound cellar where you enter through the roof.

A map of the town’s root cellars is available at the Elliston visitor center. While planning a vacation around root cellars seems like something out of Monty Python, root cellars do draw visitors to the town, along with prime iceberg, whale, and puffin viewing. Another attraction is the Roots, Rants and Roars food festival (“rant” is Newfoundland-speak for great conversation, not a fit of anger). The September festival consists of a scenic hike through the area, with stops at tasting stations for dishes using local ingredients. Chefs Chris Sheppard and Roger Dewling are in charge. “We want to make sure it is and remains a celebration of root cellars and the food that comes out of root cellars,” says Sheppard, who once made a root cellar donut: a carrot donut with parsnip cream-cheese icing and fried beets on top.

Some abandoned cellars now belong to the town. “We put vegetables in the root cellar in September,” says Coles-Hayley. Those are used for the annual Bird Island Puffin Festival in July, when locals cook a big Jiggs dinner for attendees in a local park.

Beyond tourism, these powered-down storage systems resonate with a new generation focused on locally grown foods and the greenest ways of preserving them. Elliston residents are still restoring old cellars and building new ones. As Braye concluded in a paper after her summer of fieldwork, not only are the root cellars of Elliston “anchors to practices and values of past generations,” they also serve as inspiration for a more sustainable future.

The Pirate Who Penned the First English-Language Guacamole Recipe

A revolution in food-growing, home-building, and seed-saving is afoot outside Chiang Mai.
politics

When you can't throw a vegetable at a rotten official, call them one.
farms

The landscapes on Hormuz, Iran, are striking—and edible.
Video • PinDrop

This historic lighthouse has been reincarnated as the perfect picnic place.
Twillingate, Newfoundland and Labrador

This quirky museum celebrates the history of a local cod fishing industry.
Elliston, Newfoundland and Labrador

This small Newfoundland town has declared itself the “Root Cellar Capital of the World.”
Condom, France