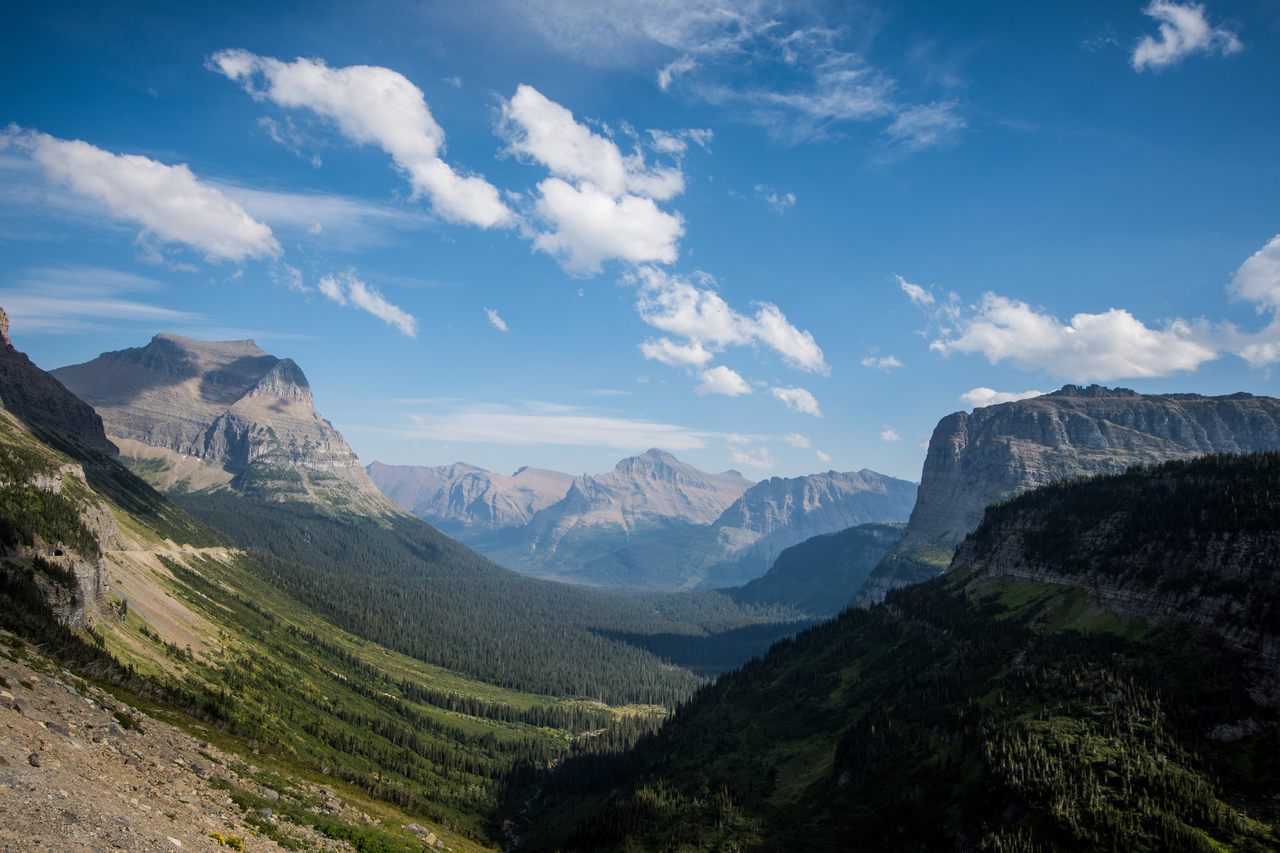 There are lots of high-tech ways to document climate change, but at Glacier National Park in Montana, a simple tool has been put into play: a camera.

It’s tough to comprehend the vastness of the offerings at this Montana landmark: the over 1 million acres of wilderness encompass 762 lakes, 175 mountains, almost 2,000 species of plants, 71 species of mammals including wooly mountain goats and lumbering grizzly bears, and—oh yes, the stars of the show—glaciers. But those glaciers are disappearing. In 1850 it was estimated the park (nicknamed “The Crown of the Continent”) had 150 glaciers. Today it has 25 glaciers considered active—large enough to be moving. It has been predicted that all of the park’s glaciers could melt as soon as 2030.

In 1997 Lisa McKeon, a physical scientist with the United States Geological Survey who works in the park, came across a pair of historic photographs depicting the glaciers she studies. Over the years, countless photos of the majestic park have been snapped, and many of those have become part of the park’s official archive, spanning over a century. It was a lightbulb moment: Why not use the old photos to create a timeline of the morphing glaciers, and add new photos every year? The Repeat Photography Project was born.

“Since 1997, the project has taken other twists and turns and become really popular with people who use them to illustrate the effects of climate change,” says McKeon. “It’s kind of taken on a life of its own.”

The most dramatic differences exposed in the photos are the shrinking size of the glaciers, but there are other shifts, such as the encroachment of alpine greenery where once there was ice. Unlike data, the photos are a visceral and immediate way to communicate to the public the vast changes taking place.

The images, which reside in the public domain, have been transformed into a traveling museum exhibit, used as teaching tools and in standardized tests—they once even found their way into an Italian rock-climbing magazine.

To date, the park has repeated over 70 historic photos from 28 glaciers, and this is no simple feat.

“All the photos, you have to hike to the site and some are day trips and some are multi-day trips into the backcountry,” says McKeon.

Some glaciers don’t even have historical images, because they’re so hard to access. Add to this the fact that McKeon and her fellow staffers can only photograph the glaciers during a small window that begins at the end of August after the snow has melted and lasts about a month before it starts falling again. That window is even slimmer in years when the snow persists or the smoke from forest fires blankets the landscape. Some years they get one shot, some years they get 10.

Lining up the shot can also be a challenge—there’s no X-marks-the-spot to tell photographers where they should stand. To get the perfect picture, McKeon uses guesswork based on old images, bushwhacking through the park to find just the right angle. Technology has helped a little with that—now she uses Google Earth and satellite imagery to approximate locations and GPS coordinates from the comfort of her office before striking out on foot.

“Sometimes it’s really obvious as you approach,” says McKeon, “You’re like, oh, there’s a giant rock that the original photographer put their giant wooden tripod on.”

McKeon marvels at the difficulties her predecessors contended with. Early park documentarians traversed the steep inclines and valleys of the park with heavy glass plates and other now-antiquated photography equipment. Naturalists and scientists shot the park, as well as photographers hired by the Great Northern Railway, which advertised the area as the “Playground of the Northwest”. And some of the photographers worked on behalf of the USGS. Re-tracing their footsteps 100 years later is part of the appeal for McKeon. Once, while hunting around the rugged terrain, she stumbled across a long-obscured path. Following it, she found the horizon line in front of her matched the one in the old photo. Who could know how long it had been since some intrepid explorer had last snapped a shot from that forgotten trail?

One thing McKeon has discovered about photography after 20 years of heading up the project is that no matter how pretty or important the landscape depicted is, people like pictures of people. That’s why if there’s a person in a historic photo, they’ll try to have someone pose in the same position. One photo that seemed unlikely to be repeated was a 1932 image of Boulder Glacier. In the foreground are a group of men with horses, looking like extras from a cowboy movie in their brimmed hats and rustic attire. In 1998, McKeon and her team set out to find the spot, without any equine extras on hand to create a perfect copy.

“And then we finally found it and we look up and lo and behold, here comes a guy walking along with two mules,” says McKeon.

She raced up the slope and asked the man and his friend to pose in the photo. They agreed. Grinning, attired in modern hiking gear, the pair became part of official park history.

McKeon hopes to begin enlisting the help of volunteers, too, and continues to try to expand the park’s database of images, a task on which there is a time limit.

Daniel Fagre, a research ecologist with the USGS, minced no words when he stated in a 2016 NASA blog that within decades the park’s remaining glaciers will become “small insignificant lumps of ice on the landscape.”

The photo archive may soon become the only way to view the glaciers for which the park is named.

The French Government Is About to Destroy $106,000,000 Worth of Cigarettes

Now we know who to bum a smoke from.
climate changephotographyparksfeatures

From above, the textured landscape can be almost abstract.
science

A researcher says her award-winning image of a swirling school of fish is also a metaphor for the oceans' health.
forests

Noah Berger is in his element amid smoke and flames.
Video • PinDrop