To Save a Rare Cuban Bat, Biologists Conducted a Census by Pedicure - Atlas Obscura 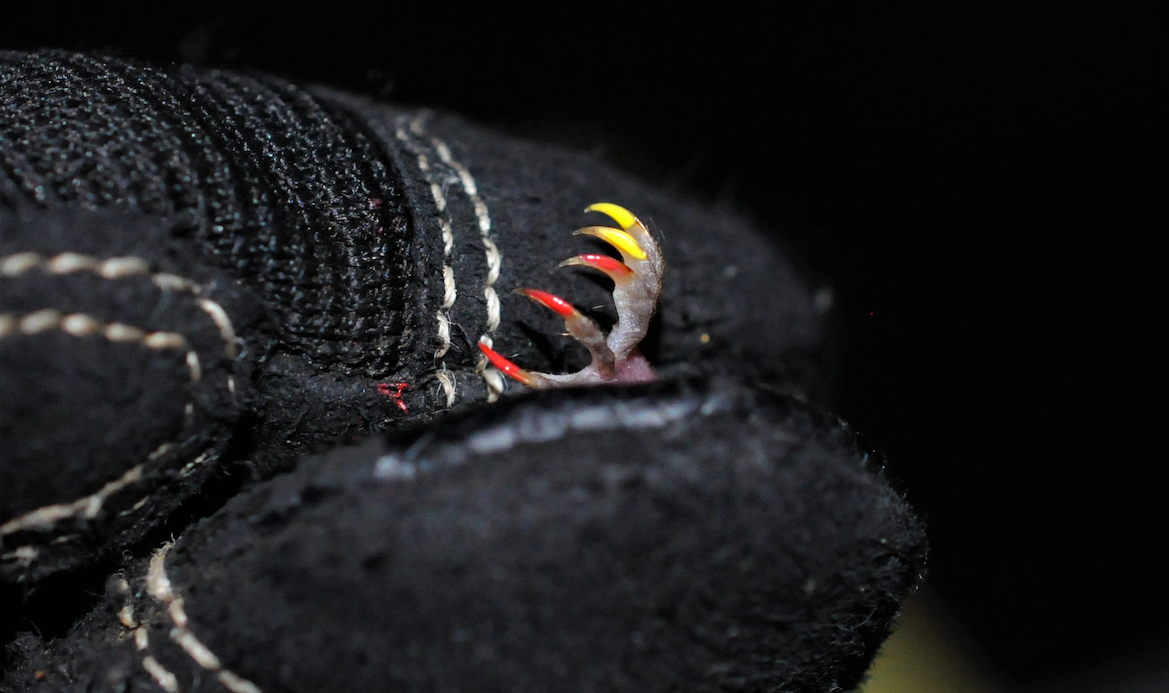 A tiny, spooky pedicure. Zoological Society of London
In This Story
Destination Guide

Though you’d never guess it from their brown, somewhat unkempt appearance, the Cuban greater funnel-eared bat is a little high maintenance. The species lives in a single cave in western Cuba that’s remote and as hot as a sauna. The bats are fragile, with spindly bones and leathery wings that feel as thin as paper, and they are extremely prone to dehydration. And as of this year, they’re starting to get pedicures.

To be fair, the pedicures are for science. They’re one biologist’s last-ditch strategy to count the rare and dwindling population of the bats, which were thought until recently to be extinct. “It’s the last living refugee [in an area that is] vulnerable to natural and anthropic alterations,” Jose Manuel de la Cruz-Mora, the bat researcher behind the study, from the Pinar del Río Museum of Natural History in the westernmost province of Cuba, writes in an email.

The Cuban greater funnel-eared bat was first discovered, in fossil form, by Harold Anthony, a zoologist at the American Museum of Natural History, in 1917. Anthony found a mandible from a strange species of bat in Cuevas del Indio, a cave on the coastal mountains of western Cuba. The mandible had an unusually “plump” molar and was stained dark brown, leading Anthony to conclude that it “probably represents an extinct form,” he wrote in a 1919 paper describing the species, which he named Natalus primus.

After Anthony’s description, everyone assumed N. primus was long extinct. In the 1970s, Gilberto Silva Taboada, an internationally renowned expert on Caribbean bats, began a survey of the bat species of Cuba. In pursuit of N. primus—dead or alive—Silva tracked down the cave Anthony visited, using a single photo the naturalist took, and arrived there via rowboat, as Yamile Luguera Gonzalez reports for Cuba’s Radio Cadena Agramonte. Once inside the cave, he found an enormous, rotting tree and abundant fossilized remains of N. primus. In the years following, Silva and other paleontologists unearthed more evidence of the bats going back as far as the Pleistocene, around 11,000 years ago, in more than a dozen separate locations in Cuba—suggesting it once flitted across the entire island, says de la Cruz-Mora, who is also a fellow at the Zoological Society of London’s EDGE program, which stands for “Evolutionary Distinct and Globally Endangered.”

As all of the known remains of N. primus were fossilized, there was nothing to suggest that the species was anything but extinct—until 1992, when biologists Adrian Tejedor and Dialvys Rodríguez-Hernández, of the American Museum of Natural History in New York and ECOVIDA in Pinar del Río, respectively, managed to capture an individual of N. primus, according to the researchers’ 2004 study in Mammalian Biology. The researchers did not find N. primus in the Cuevas del Indio, but in Cueva la Barca, in Guanahacabibes National Park. The park boasts more than 150 square miles of protected land and coast and is considered one of Cuba’s most intact natural sites. He spirited the specimen to Havana, where Silva confirmed it was a Cuban greater funnel-eared. Researchers revisited the cave to confirm that the bat belonged to a living population. After several more expeditions, N. primus was officially declared back from the dead.

Like most bats, N. primus is little and brown, approximately two inches of tawny fluff. That actually qualifies it as a medium-sized bat, though it’s the largest in the family Natalidae. Unlike most bats, however, N. primus prefers to roost in hot caves. According to de la Cruz-Mora, hot caves are usually ones with enclosed, humid, pocket-like chambers with temperatures that can top 104 degrees Fahrenheit. This makes good roosting spots rare, and pretty much rules out the possibility of other, undiscovered populations; scientists have already checked all of Cuba’s other hot caves.

N. primus is quite susceptible to dehydration, hence the predilection for humidity. For this reason, the bats forage in a close radius around the cave, which makes the environmental integrity surrounding the cave extremely important. Evolutionarily speaking, they’re far from flexible.

Though the researchers know for sure there is a population of N. primus in Cueva la Barca, they have had no idea how large it is. And finding out is not easy. Getting to the cave in the first place requires trekking through a bramble studded with snakes, spiders, and scorpions. And once inside, there is no easy or obvious way to count every bat. So the researchers decided to estimate the population as best they could using a mark-and-recapture method. This involves catching a few individuals, marking them without harming them, and releasing them, and then doing the whole thing over again. How often they capture already marked individuals over time can then be used to extrapolate the overall population size.

But N. primus are too fragile to be banded or marked with the kinds of conventional tags researchers use for birds and larger bats. So the biologists came up with the idea of a highly specific pedicure, along with a small patch of hair shaved from the back. De la Cruz-Mora and his colleagues painted a code on one of each bat’s feet using four colors—white, red, pink, and sunshine yellow—one color to a claw. (Despite other reportage on de la Cruz-Mora’s work, which refers to the nail treatment as a “manicure,” these treatments might better be described as pedicures, as the varnish goes on the bats’ foot-claws.)

Catching the bats, however, was another challenge. The researchers conducted the survey during January and February 2019, a time when the bats were not reproducing. De la Cruz-Mora used small hand nets (a mesh basket at the end of a handle) and mist nets (loose mesh suspended between poles) to collect individuals. After one was captured, he would immediately place the animal in its own leather pouch to avoid accidental dehydration or any kind of physical harm. They painted the creatures’ claws while dangling them upside down; “not a problem for bats,” de la Cruz-Mora says. To keep handling to a minimum, the researchers spent less than five minutes per animal.

Perhaps surprisingly, temporary nail polish made for humans—which has no toxic or harmful effects on the bats, de la Cruz-Mora says—has a history in wildlife conservation. Bird biologists sometimes paint the toenails of nestlings too small to band. Clear nail polish is often used as well, perhaps to take the impression of a threatened leaf or to kill botfly pupae while working in a rainforest.

When the researchers analyzed their data, they were unsurprised to find that the last remaining population of the Cuban greater funnel-eared bat is not quite robust. They estimate there are fewer than 750 individuals of N. primus living in the cave. De la Cruz-Mora says their goal now is to establish a long-term monitoring strategy so they can detect any changes in population, however small. The roof of Cueva la Barca is also subject to thermal instability, which could get worse as climate changes.

Due to its rarity, the bat is not well-studied. During the expeditions in the cave, de la Cruz-Mora hoped to evaluate the bats’ behavior, how the population is distributed, what they forage for, and how they do it. These kinds of observations are routine for bat biologists, and involve acoustic monitoring and a new kind of detecting equipment called AudioMoths, as well as the placement of mist nets around the cave. But de la Cruz-Mora was stunned to find that these monitoring techniques failed with N. primus. “The capture rate using mist nets was nearly zero, after more than 20 nights of hunting,” he says. And the same thing happened with their acoustic monitoring. “We were unable to identify, clearly enough, the echolocation calls of N. primus from the audio records collected in the field.” After all, N. primus is not the only bat that lives in Cueva la Barca. When they give it another go, the researchers will have to get creative again—only a pedicure won’t work this time.

On top of all this, the bat’s cave lies near the border of the national park, so researchers are worried that N. primus’s only habitat may not be as protected as it would be if it were deeper in. For now, the most urgent task is to revise N. primus’s status on the IUCN Red List to gain global recognition for just how endangered the species is, de la Cruz-Mora says. He also plans to establish a community-based conservation campaign at his museum to ensure the locals are aware of the threats facing their winged neighbors.

Introducing the Cuban greater funnel-eared bat in hot caves across the island is still a ways away. “A reintroduction plan for N. primus is no more than a beautiful dream,” de la Cruz-Mora says. “For now, our efforts are focused on keeping the last living population of the species with us.”

Yet despite fragile body and specific needs, this population of N. primus has clearly persisted. “With all these risks around, N. primus stays alive,” de la Cruz-Mora says. “It is a fighter and a survivor.”

The cave is large for Alberta's boreal forest.
science

The Effort to Save Colombia's Underground Mountaintop Tombs

Scientists and conservators are finally able to return to what was once an Andean war zone.
Video

A hit single is benefiting an endangered species.
Read more
Thanks for sharing!