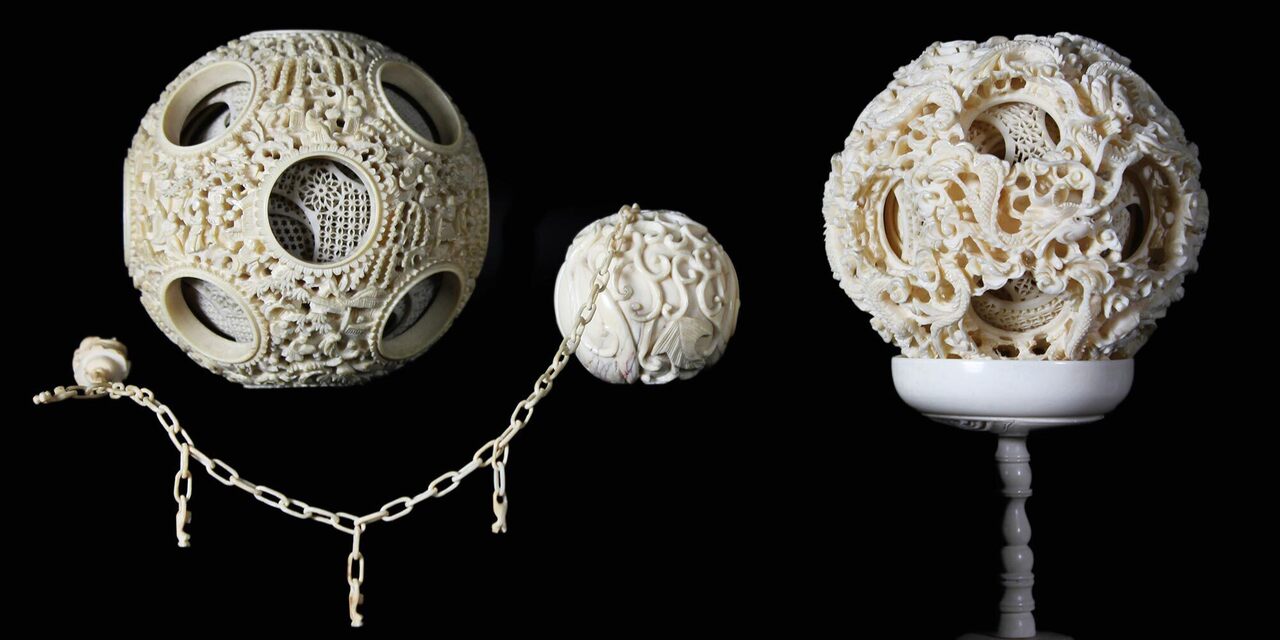 In 1388, the Ming scholar Cao Zhao published Gegu yaolun, an instrumental guide to collecting and assessing Chinese antiques. Among his writings on fine craft, including porcelain and bronze items, is a description of a peculiar object: guǐ gōng qiú (鬼工球), or “devil’s work ball.” That name might bring to mind something insidious, but Cao was referring to beautiful, hand-carved ivory orbs that nest inside each other, such that the inner ones are free-floating. Each layer has holes evenly distributed across its thin surface, simultaneously concealing and revealing the artistry beneath.

So why the allusion to spirits? “People said that something like this could not be carved by a human,” says Jeffrey Moy, the executive director of Chicago’s Heritage Museum of Asian Art. “When you look at them, they look perfect. Later on, they became known as ‘concentric balls’ or ‘puzzle balls.’”

The Heritage owns two exquisite puzzle balls from the 19th century, when the art form—a special style of carving from Guangzhou, or Canton—reached its peak. Each has about 20 to 25 layers of ivory, all carefully chiseled from a single piece of the material. In comparison, the early examples Cao Zhao describes have just three. While puzzle balls are technically puzzles, solved by aligning the holes (using toothpicks is recommended), they were largely decorative due to their fragility.

The carvings alone are mind-boggling: At the Heritage, the outermost layer of one ball features a garden scene, complete with tiny human figures; the other is more textural, embellished with dragons weaving among undulating patterns. According to Moy, dragons were common puzzle ball motifs because of their auspicious meaning in Chinese culture. Similar examples can be found at Gettysburg College, which owns nine ivory balls. The mythical beasts are often depicted with phoenixes, a pairing that has long represented the perfect coupling of yin and yang. Inside these showstopping shells, inner layers tend to feature simpler but still highly intricate designs, often of geometric latticework.

Europeans, in particular, were captivated by puzzle balls and collected them as curiosities starting in the 18th century. The spheres were among the ivory goods carved by Chinese artisans in Canton that became popular as export ware; others include fans, combs, and backscratchers. “Foreigners visiting were always looking for something to buy,” Moy says. “Puzzle balls were common works of art for them to purchase and were a way for artisans to try to show off skills.” The dark reality of this desire for ivory products, of course, is that it fueled the ivory trade, resulting in the deaths of countless African elephants.

In Germany, craftsmen even tried to replicate the techniques to create their own market. “Lorenz Zick [of Nuremberg], in imitation of the Chinese, carved balls, enclosed one inside another; his son Stephan, continued the same style of work,” writes the 19th-century French art historian Charles Jules Labarte. The work from Canton, however, was more intricate.

The region’s method is detailed in an 1876 publication by the Scottish photographer John Thompson, who traveled extensively around China. According to him, an artist first used a lathe to rotate a block of ivory, shaping it into a sphere. They then drilled evenly distributed conical holes towards the ball’s center. Accessing the interior with an L-shaped tool, they would carve grooves to form concentric gaps, creating layers. “Hole after hole is in like manner centered,” Thompson wrote, “until all the grooves are cut, and meeting each other, the innermost ball falls into the center of the sphere. This inner ball is then moved about and carved with long tools passed through the holes, after which the bent chisel is again brought into play to cut out the next ball.”

The “devil’s work ball,” though, still holds secrets to this day. Researchers with the Rijksmuseum in Amsterdam and Centrum Wiskunde & Informatica, a Dutch computer science institute, have partnered to scan and 3D-image two of the museum’s early-18th-century puzzle balls—one with nine spheres, and one with a dozen. “Through our research we are able to deduce the make process of the balls,” says Ching-Ling Wang, the museum’s curator of Chinese art, adding that the team will publish a report within the next year. Among their questions: How many L-shaped tools are required? What are artisans able to see? As the computer scientist Robert van Liere notes in an early presentation, “It is very dark deep down in the ball!”

The object’s design has also inspired the British firm Steven Chilton Architects to propose a puzzle ball-inspired theater in Guangzhou. The envisioned building consists of a dome of overlapping shells, each decorated with geometric patterns.

If realized, it would stand as a striking homage to the region’s traditional art form that can never be produced legally again. At the end of 2017, China finally banned all domestic ivory sales and ordered ivory production facilities to cease operations. The origins of puzzle balls add to their complexity: While undeniably beautiful to behold, they are tragic reminders of the desires that drive the illegal wildlife trade.

An Artist Immortalizes Hong Kong's Neon Signs, One Stitch at a Time

In the frigid city of Iqaluit, Canada, a men's jail has become an unlikely part of the art market.
art

A community of feminist crafters grapples with a patriotic quilt that a 99-year-old nurse left behind.
Video • Wonder From Home