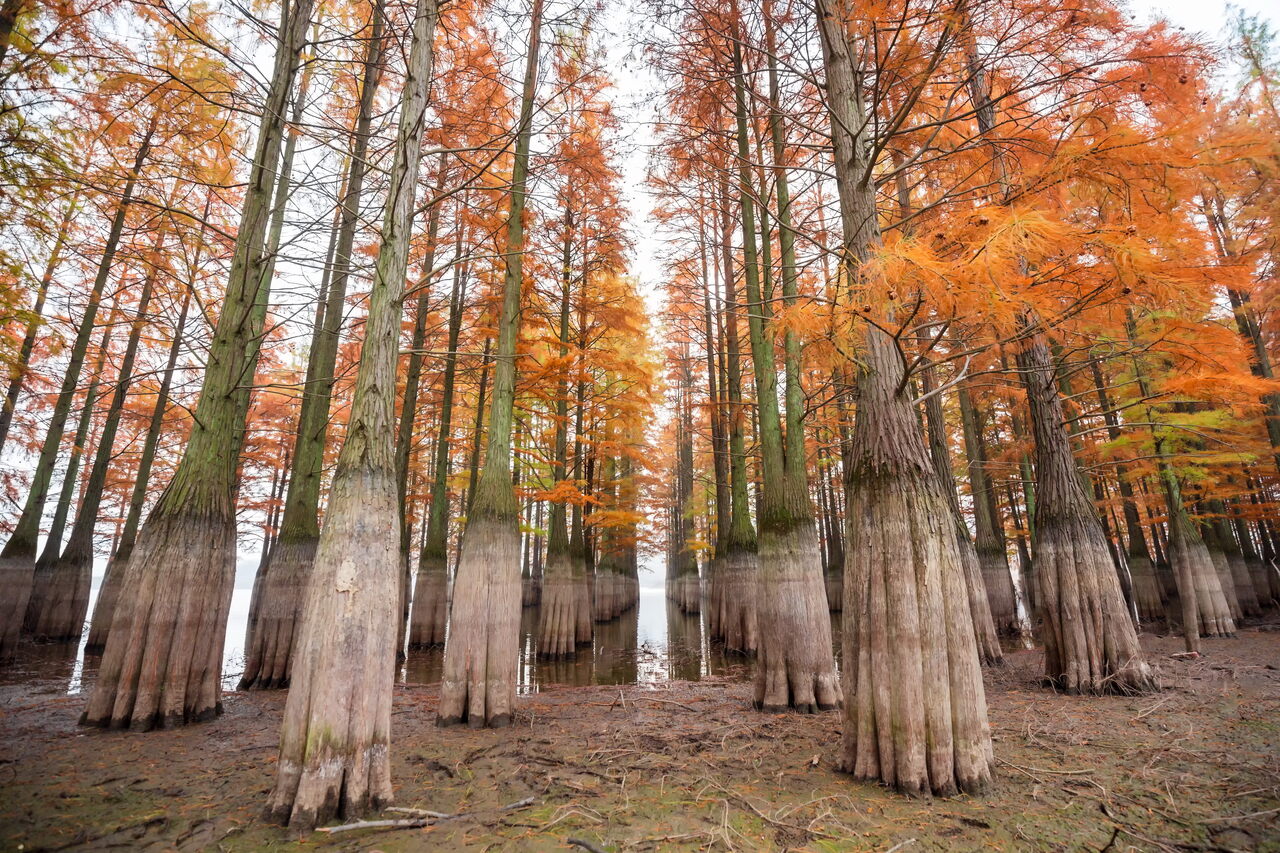 Dawn redwoods, like these in China, once grew on remote, Arctic Ellesmere Island. Costfoto/Barcroft Media via Getty Images
In This Story
Destination Guide

Ellesmere Island, in the Canadian Arctic archipelago, just north and west of Greenland, is a polar desert flanked by ice shelves. “It looks literally like the end of the Earth,” says Christopher West, a postdoctoral fellow in geological sciences at the University of Saskatchewan, who visited the island for his graduate research in 2017. “It’s quite brown and desolate, with ice packs reaching out into the ocean in the distance, or little bergs floating by.”

The island sits astride the 80th parallel. Trees can’t survive there, and most bushes can’t either, but the rolling tundra isn’t barren—it’s roamed by musk oxen, Arctic wolves, hares, and Arctic lemmings, and blanketed by brown grasses and small plants, including creeping Arctic willow, shrubs that rarely grow more than a few inches tall. “The smaller a plant is,” West says, “the likelier it is to survive there.” Visiting researchers usually arrive in June or July, when the cold loosens its grip a little, and fieldwork often coincides with the seasonal blink when the land flashes white, yellow, and pink with wildflowers. Arctic bell-heather shows off weeping blooms, Arctic poppies’ delicate, canary-colored flowers look like folded tissue paper, and mats of purple mountain saxifrage, Nunavut’s territorial flower, emerge among the rocks. When the flowers close up again, Ellesmere “goes back to being a very sleepy ecosystem,” West says. He encountered these plants while setting out to catalog the flora that preceded them by millions of years.

In the Eocene Epoch—from about 56 to 34 million years ago—the Arctic landscape looked totally different. There was no persistent ice to speak of, and annual average temperatures hovered in the mid-50s Fahrenheit. There may have been rare dustings of snow or intermittent frost, but for the most part, it was warm, humid, and swampy. And, most notably, it was covered with trees.

Fossil plants have long provided windows into the temperate pasts of places that are frozen today. Robert Falcon Scott’s team found plant specimens in Antarctica’s ancient rocks in 1912—evidence that the icy place had once been lush and green. Scientists have known about the fossil plants on Ellesmere and the neighboring Axel Heiberg Island since the mid-19th century, when members of the British Arctic Expedition collected some and passed them to Swiss naturalist Oswald Heer, who compared them to fossils that had previously been found in Greenland.

In the 1980s, 1990s, and early 2000s, James Basinger, a professor of geological sciences at the University of Saskatchewan, collected some more samples. By the time West joined Basinger’s research team in 2013, it had become clear that, despite the fossil evidence, there wasn’t a complete taxonomy of exactly what had once flourished on what are now Ellesmere and Axel Heiberg—a full sense of the forests that once covered these treeless islands. In a new paper in the journal Palaeontographica Abt. B, West—along with Basinger and the Brandon University biology professor David Greenwood—laid out the most complete catalog of the prehistoric flora that once took root there.

For his research, West drew on specimens collected by Basinger and others, housed in the University of Saskatchewan’s Paleobotanical Collection and the Yale Peabody Museum. He also ventured to the Arctic himself to gather some more—no easy feat. In summer 2017, he took a four-hour flight from Ottawa to Iqaluit in Nunavut, and then boarded a smaller plane to Resolute Bay, a tiny town on Cornwallis Island. There, he transferred to a six-seater plane equipped with large, all-terrain tires. Once he was on Ellesmere, where he spent about three weeks, West might go days or longer without seeing anyone outside of his nine-person field crew; he rarely even saw an airplane overhead. But unlike 19th-century expeditioners, he was able to touch base with a team at Resolute Bay. “When you get to your site, one of the first things you do besides setting up your tent is setting up a radio tower that allows you to check in,” West says. “Every morning you check in like, ‘Yes, we survived, we haven’t been eaten by polar bears.’”

Scientists who study fossil plants have to put together puzzles with some big missing pieces. They may find several fossilized leaves or fruits, for instance—they are are numerous and have many opportunities to be blown or washed into sediment, where they stand a chance of being preserved—but not the trunks. “It’s rare for the whole plant to get into the fossil record and that you get that smoking paleontological gun, with the leaf, stem, and branch all together,” West says. He mainly studies fossil leaves, and analyzes their distinctive shapes, edges, and vein patterns.

From these characteristics, West concluded that back in the Eocene, the land that would become Ellesmere Island was stippled with ancestors of birch, horse chestnut, pine, spruce, and cedar trees, in addition to gingko, dawn redwood (Metasequoia glyptostroboides), and Chinese swamp cypress (Glyptostrobus pensilis). There were elements of a modern tropical forest, too, with magnolias and ferns, and large monocots that resembled palms and were related to the ginger family. The fossil evidence suggests that the floral neighborhood might have been a bit like the modern-day temperate rainforest of British Columbia as well as the swampy, diverse ecosystems of Georgia and northern Florida.

If West had landed in the Eocene, he would have seen stands of trees instead of swaths of snow and ice, but it’s hard to say just what this forest would have looked or smelled like. “When you’re trying to recreate the environment that far into the past, you’re always going to have a degree of emptiness,” West says. But it is certain that the plants there were tough.

Because Ellesmere Island was at roughly the same Arctic latitude then as it is now, the plants that lived there had to survive something their modern, scattered descendants rarely encounter—months-long stretches of constant light, and months of velvety dark. The plants flourished in spite of that, and their descendants might be capable of doing the same. In 2006, researchers from the University of Maine placed the modern relatives of some of these ancient trees in constant light, and found that the dawn redwood (which grows in several places, but is native only to China today), was able to keep on photosynthesizing despite the stress of having no break from the brightness. Whatever grew on Ellesmere could handle that stress, West says, and that makes the Arctic of the distant past an interesting case study for understanding how plants might respond to an uncertain future.

Cars slowed to a halt on State Route 240, but the plants just kept bounding along.
science

Found: A Windfall of Neanderthal Footprints in France

257 small steps for our human cousins, one giant leap for paleoanthropology.
volcanoes

Alexander von Humboldt might have been using the wrong mountain.
Video • PinDrop

Tree rings are so much simpler.
Read more
Thanks for sharing!