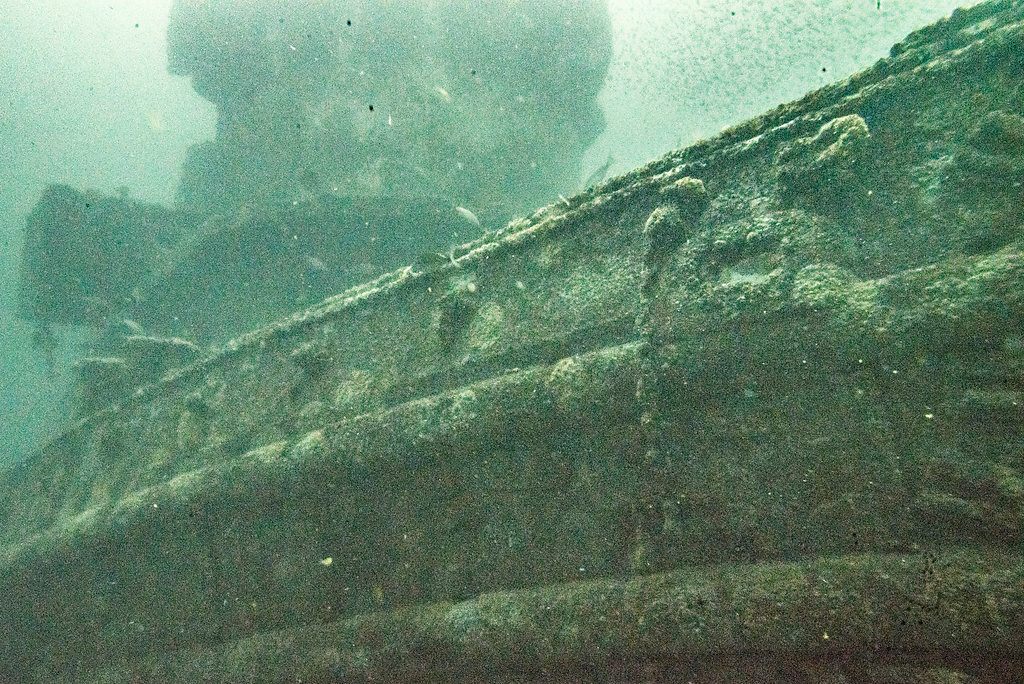 Pensacola is a city brimming with natural wonders, maritime history, and oftentimes, a combination of the two.

Known for beaches, lagoons, and bayous, Pensacola is an ideal place to explore the region’s untamed beauty. On the historical front, five different flags (Spain, France, Britain, the Confederacy, and the United States) have flown over the city since its founding in 1559. Today, an active naval base ensures that military and political heritage are still at the forefront of the city’s culture.

And with over two dozen tugboats, battleships, and scrapped naval vessels submerged just off the coast, Pensacola is a wreck diver’s paradise. Whether you’ve earned your scuba certification or not, the area offers plenty of opportunities for adventure above and below the water.

Day 1: Explore beneath the waves

Grab your gear and dive (literally) into Pensacola’s undersea history. Be sure to work with an experienced crew like the folks who run the Jolly Roger to choose your dives. Some of the best wrecks in the area are the USS Massachusetts, the Ocean Wind, and the San Pablo or “Russian Freighter.” If you’re an advanced diver, consider a trip to the USS Oriskany, an aircraft carrier that earned battle stars in the Korean and Vietnam wars. It’s a deeper dive in more ways than one: veterans visit to change the underwater flag four times a year.

As you motor out of the inlet past frolicking dolphins, glistening beaches, and a trio of stone forts into the Gulf of Mexico, watch for the moment when the water turns from the dark blue of the bay to the stunning aquamarine of the gulf.

The wreck of the USS Massachusetts sits in 30 feet of water (her turrets sometimes peek above the waves). Built in 1896, she’s considered the oldest American battleship still in existence—ironic, given her notoriously poor design. After surviving the Spanish American War and WWI (and sustaining an explosion and several run-ins with land), she was finally decommissioned in 1919. Two years later, she was anchored in her current location to be used as a target for experimental artillery, where she eventually sunk.

Since then, the USS Massachusetts has assumed a more dignified purpose as an artificial reef, providing surfaces to which algae and invertebrates can cling, in turn attracting fish to the area.

“The Massachusetts is like New York City,” Danielle Williams, a local diver, said of the area’s wildlife. “They don’t all live here, but everybody comes to eat and hang out.”

As you circle the hull, try to discern which parts of the old battleship you’re looking at as you interact with the sea creatures around you. Spend some time with the purple-jointed arrow crabs that cling to the wreck, and keep an eye out on the sandy side for passing stingray. Massive goliath grouper who, true to their name, can weigh upwards of 600 pounds, lurk in the shadows of the shipwreck.

Climb back on board the dive boat to motor to the wreck of the Ocean Wind, a tugboat that was submerged in 2016 solely to serve as an artificial reef. Because the reef is new, patches of pale metal are still visible, offering a visual contrast to the mossy brown Massachusetts. While an ecosystem is rapidly taking over, the boat remains fully intact. Wear gloves and you can swim through the vessel. Don’t miss the wheelhouse, where you might encounter a school of striped spadefish who seem to have anointed themselves the ship’s new captains.

Once you’ve returned ashore, head into historic Downtown Pensacola and try the smoked lionfish dip at the Tin Cow on South Palafox Street. Lionfish are an invasive species that pose a severe threat to local marine life, so eating them supports Pensacola’s overall ecosystem.

Captain Michael Kirk’s racing Condor sailboat is called the Dare II. As in, “Dare to be adventurous.” One of only 21 ever built, she’s a tri-hull catamaran that is both fast and stable. These boats were built for nonstop around-the-world-races, and this is the only place in the world you can ride one as a tourist.

Book a spot on the 11 a.m. trip on a Tuesday or Wednesday and you’ll be guaranteed one of the best seats to view a practice session of the Blue Angels, the U.S. Navy’s flight demonstration squad. Once on board, the captain hoists the mainsail and you’re off, speeding across Pensacola Bay toward the naval base. Soon, you’ll see the telltale plumes of smoke that indicate the start of practice. Kirk maneuvers beneath the planes so they repeatedly buzz directly overhead in formations of three or four, their wingtips 36 inches apart.

After practice is over, sit back and bask in the breeze as you sail across the bay. Kirk takes an interactive approach to captaining. Everyone gets a chance to man the ship, and the boat is so steady you’re free to stroll its decks. Take a seat on the very tip of the bow and let your feet dangle. With the waves brushing your heels, the sensation is akin to surfing and flying at the same time.

Back at the marina, hop in a car and drive about 20 minutes to the beach. Once on Fort Pickens Road, continue to the westernmost tip to explore the sandy passages of the eponymous Fort Pickens, the only fort in the area to remain in Union hands during the Civil War.

Once you’ve had your fill of history, hit the beach nearby. For dinner, try the oysters (one variety, available about 10 different ways) just down the road at Peg Leg Pete’s. If you’re in town on a Tuesday night, check out who’s playing at “Bands on the Beach,” a spring and summertime beachfront music series.

Top the night off with a Bushwacker, a creamy, frozen drink that originated in the Virgin Islands but gained a reputation as Pensacola’s signature cocktail. The folks at the Sandshaker Lounge claim to have the original recipe.

Day 3: Hike through the Bayou

On day three, stop by Joe Patti’s seafood market to pick up a picnic lunch, then head to Tarkiln Bayou Preserve State Park. Named for the 19th-century kilns that processed pine tar used in building ships, the park is today one of the best places in Florida to spot rare, carnivorous pitcher plants.

From the Tarkiln parking lot, head right and follow signs for the Perdido Bay Trail. On this course, you’ll find yourself winding through a pine forest blanketed with ferns and lichen that eventually opens to a beach on the shore of Perdido Bay. Across the water, you can see Alabama’s shores.

Hike back through the pine forest, and take note of the burnt-to-a-crisp tree stems that provide a surreal contrast in scenery. Though they may appear ominous, these controlled burns are vital to plant preservation in the area.

The other path will take you on a boardwalk to the bayou. Along the way is a massive grove of carnivorous plants, including Florida’s largest cluster of white-top pitcher plants. You also can spot the sweet pitcher plant and Chapman’s butterwort waiting to snack on a bug or two. The plants are harmless to humans, but they use their bright colors and aromatic nectar to lure insect prey to their deaths.

At the bayou there’s a viewing platform from which you can watch birds diving into the water to catch fish, and fish jumping from the water to catch bugs. You also might spot the occasional dolphin (they’re ubiquitous in Pensacola).

After wrapping up at the bayou, take your picnic lunch over to the nearby, and publicly accessible, Naval Air Station Pensacola. At the base’s civilian entrance, ask for directions to Fort Barrancas, an abandoned fortress dating to the pre-Civil War era, built upon the structure of an even older Spanish bastion. Once a contested site between Union and Confederate forces, echoes of military conflict still hum through the now-tranquil environs.

If you’re craving a respite from the sun, stop by the naval aviation museum on your way out of the base. Grab a drink or a bite at the Cubi Bar Cafe, a near perfect recreation of a storied bar that, for decades, served U.S. naval officers at Cubi Point in the Philippines. Veterans of the original hangout may find the resemblance uncanny—that’s because when the bar closed in 1992, most of its famous furnishings were packed up and shipped to Pensacola.

For even more lively decor, head back into town and treat yourself to an evening at McGuire’s, a sprawling Irish pub with multiple theme rooms and dollar bills stapled to every square inch of wall and ceiling. Ask your server to bring you a staple gun and marker and you can add your own.

Built in an old fire station and expanded over the years, McGuire’s is a Pensacola institution. Don’t miss the $0.18 Senate Bean Soup, a popular menu item from the U.S. Senate cafeteria that used to sell for 18 cents in D.C. It still does at McGuire’s.

The dollars on the walls of McGuire’s have accumulated over 40 years. They’re a delightful metaphor for Pensacola’s multi-layered history. Whether you come for the maritime history or the scenery, you’ll leave charmed by Pensacola’s people, stories, and unabashed willingness to be itself.

How to spend three obscure days wandering the Everglades, the Ten Thousand Islands, and Big Cypress Swamp.
Sponsored by Visit Florida
Want to see fewer ads? Become a Member.
From Around the Web
Related

How to spend three obscure days wandering the Everglades, the Ten Thousand Islands, and Big Cypress Swamp.
Sponsored by Visit Florida
Thanks for sharing!