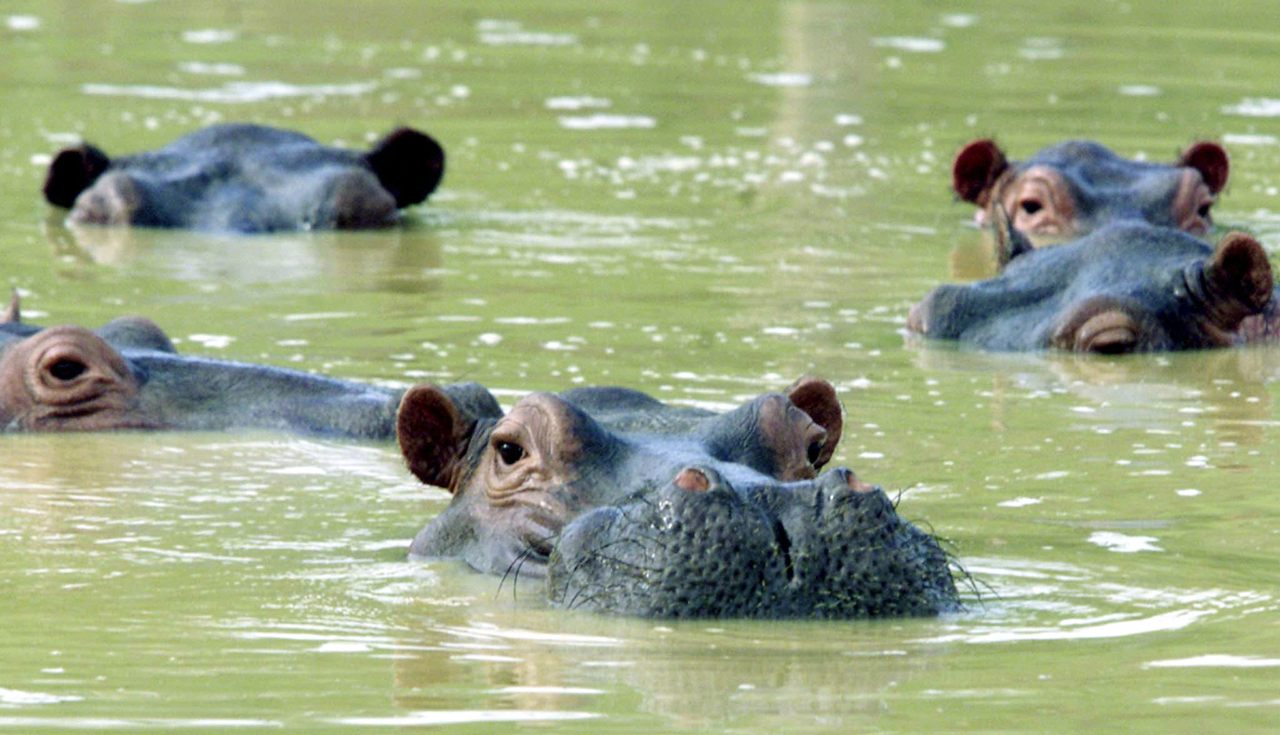 You can't easily spot the poop in the soupy green water, but it's definitely down there. FICG.mx/CC by 2.0
In This Story
Place

Pablo Escobar, the late Colombian drug lord who founded the notoriously violent Medellín Cartel, had a thing for hippos. He once installed a quartet of them on his extravagant Colombian estate, Hacienda Nápoles, where they joined a lavish menagerie. When Escobar was killed in 1993, the other creatures were schlepped off to zoos, but the huge hippos were deemed too unruly to wrangle. Free to roam, the four multiplied into dozens that have been ambling around the Magdalena River Basin ever since. They’ve been spotted more than 90 miles from Escobar’s estate, leaving prodigious droppings all the way.

The hippopotamus is native to sub-Saharan Africa and grazes on land but spends most of its life in water, and treats rivers and lakes as big toilets. Each year, a single hippo can dump more than 1,650 pounds of carbon and other nutrients into the water—and it does so mainly by pooping, says Jonathan Shurin, an ecologist at the University of California, San Diego.

A few years ago, Shurin started wondering what all that poop was doing to a smattering of small lakes on Escobar’s old estate in northwestern Colombia. To figure it out, he and his collaborators needed to get close. The poop doesn’t stink up the air, Shurin says, and “the lakes are all pretty green and soupy” to begin with.

In 2017 and 2018, Shurin and seven collaborators sampled water from 14 humble lakes dotting Hacienda Nápoles. Some were known to harbor hippos. The researchers assessed water quality, oxygen levels, and signatures of stable isotopes. They found that hippos were hauling a lot of carbon into the water, and that, in the lakes where the ungulates wallow, the amount of dissolved oxygen sometimes dipped below the level that fish can handle. In hippo-studded lakes, researchers also detected larger quantities of cyanobacteria, which can cause stinky, harmful algae blooms. “Our results suggest that ongoing population growth and range expansion by hippos may use a threat to the quality of water resources in the Magdalena Basin,” Shurin and the other researchers write in a new paper in the journal Ecology.

Bowel movements aside, hippos also change the environment when they tromp along. They sometimes wind up making channels or compacting sediment, which can give water more places to pool. That can make life harder for plants and animals that have adapted to an ecosystem without the big, toothy mammals. “The lakes are mostly quite small, so a small number of hippos makes a big difference,” Shurin says.

Many more could be on the way. The herbivores have plenty to munch on in Colombia, where people are their only predators. They can live for several decades and welcome a calf every 18 months, once females reach reproductive age. Because things are going swimmingly for the hungry, hungry hippos, there could be between 400 and 800 individuals pooping up a storm by 2050, according to research published in the journal Oryx in December, and led by Amanda Subalusky, now a biologist at the University of Florida. (If their population growth rate were to reach 11 percent, a scenario Subalusky and company describe as “not unrealistic,” the authors estimate that there could be closer to 5,000 hippos.)

So how do you manage an introduced species that is thriving in its new home, and has the feces to prove it? “The only choices are sterilizing them, catching them and sending them somewhere, or killing them,” Shurin says. “The last one is unpopular with the public, and the first two are expensive and dangerous.” (It cost 15 million pesos, around $4,500 USD, to relocate a single juvenile hippo to a Colombian zoo in 2018, National Geographic reported.) The hippos have also become a tourist draw. “There is no easy option,” Shurin says. As the population continues to balloon, Subalusky and her collaborators call for closer attention to the current and future population size, as well as research into the borders of its range and the local species most affected by a proliferation of poop. In the meantime, the current gaggle will keep on fouling the place up.

Georgina Mace helped change the way both scientists and policymakers see living things, including the most vulnerable.
islands

More room to roam for the islands' unique fauna.
Video