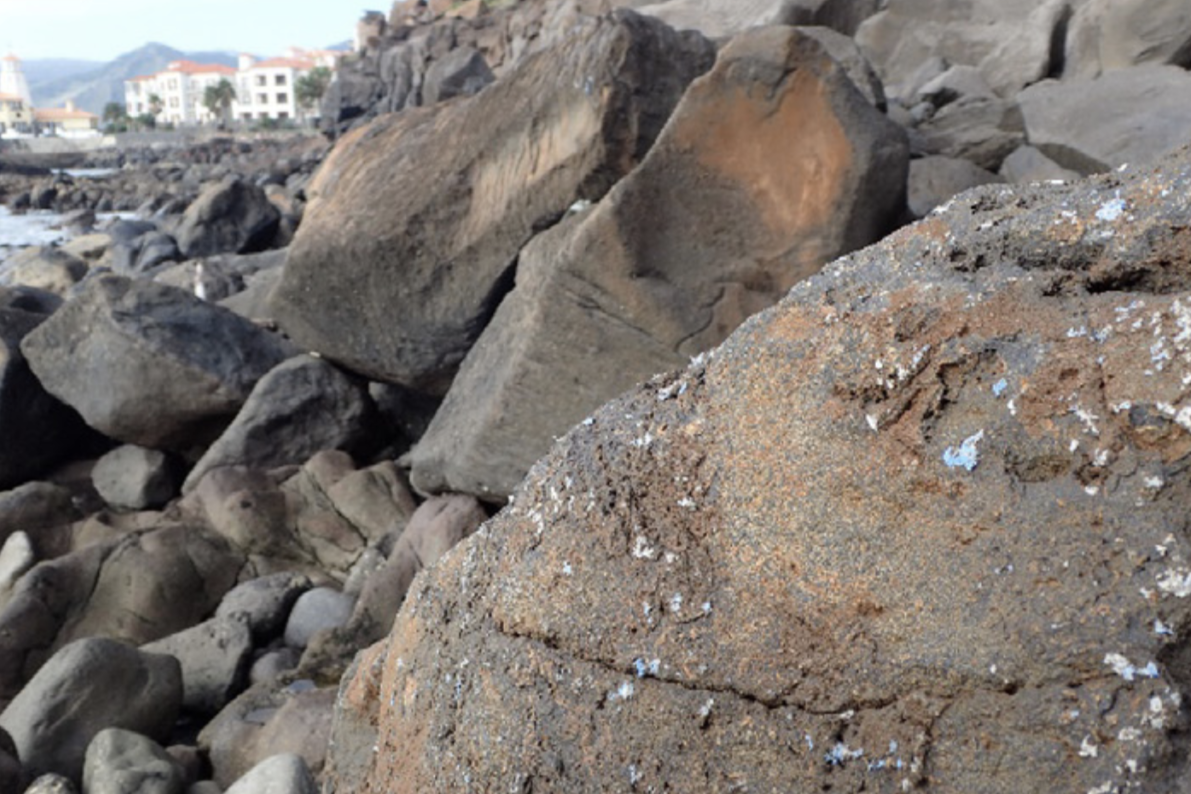 Plastic pollution isn’t what it used to be. Sure, there are still plastic bottles bobbing around the Pacific and those cursed balloons from Frozen sunken into the seafloor. But there’s a new generation of plastic that’s a little less obvious and a lot more insidious. In 2014, researchers in Hawaiʻi discovered the strange union of the plastiglomerate, which consists of plastic and rock fused together. Now, scientists have identified another never-before-seen kind of plastic pollution. Meet plasticrust, a new kind of plastic pollution that doesn’t quite look like plastic at all. In fact, it looks almost natural, like a blue-tinted lichen licking the rocks. But unlike lichen, no life throbs inside the cold, artificial heart of plasticrust, which now threatens the volcanic island of Madeira, Portugal, according to Gizmodo.

Ignacio Gestoso, a marine ecologist at MARE-Marine and Environmental Research Center in Madeira, first noticed a blue sprinkling of the plasticrust on the rocks in 2016 during a routine sampling of Madeira’s intertidal communities. Gestoso brushed the baby blue growth aside, thinking it somewhat strange but probably a one-time thing. But in the years that came after, the crust persisted, this time in blue, gray, and white. It had spread, too, now overtaking an estimated 10 percent of the volcanic rocks circling the island’s shore during low tide. A subsequent chemical analysis of the colored crust revealed it was polyethylene, an exceptionally common plastic found in grocery bags, shampoo bottles, and many children’s toys. The researchers published their findings in Science of The Total Environment.

Gestoso suspects the plasticrust’s unnatural presence springs from a surprisingly natural process. The crust borrowed a survival strategy of one of the ocean’s most common life forms. “We think that plasticrusts are likely originated by the crash of large pieces of plastic against the rocky shore, resulting in plastic crusting of the rock in a similar way algae or lichens do,” Gestoso writes in an email.

Aside from being an eyesore, the plasticrust could threaten the survival of the common periwinkle, a European sea snail that grazes on these intertidal rocks. Recent lab tests have proven the snails are unable to distinguish clean algae and diatoms from microplastics as a food source, suggesting the snails at Madeira may be ingesting microplastics in their daily hunt for food.

While the plasticrust seems confined to a particular site on Madeira, the researchers believe the phenomenon is probably happening around the world. “We are convinced this is not a case exclusive of Madeira, and most likely this new phenomenon will be reported in other global regions,” Gestoso says. They plan to continue to evaluate the spread of plasticrusts around Madeira and track how this chimeric pollution may be invading marine food webs as well as intertidal rocks.

One in Indonesia has been carrying a rubber ring since at least 2016. Here’s how the litter might be affecting the animal’s life.
islands

The bean-sized snail has persevered despite hundreds of related species going extinct in recent decades.
science

Caddisfly larvae are adapting to polluted waterways, but their recycling strategy has its drawbacks.
islands

In the Field With the Intrepid, Dedicated Snailers of Hawai‘i

3:32
Want to see fewer ads? Become a Member.
From Around the Web
Thanks for sharing!