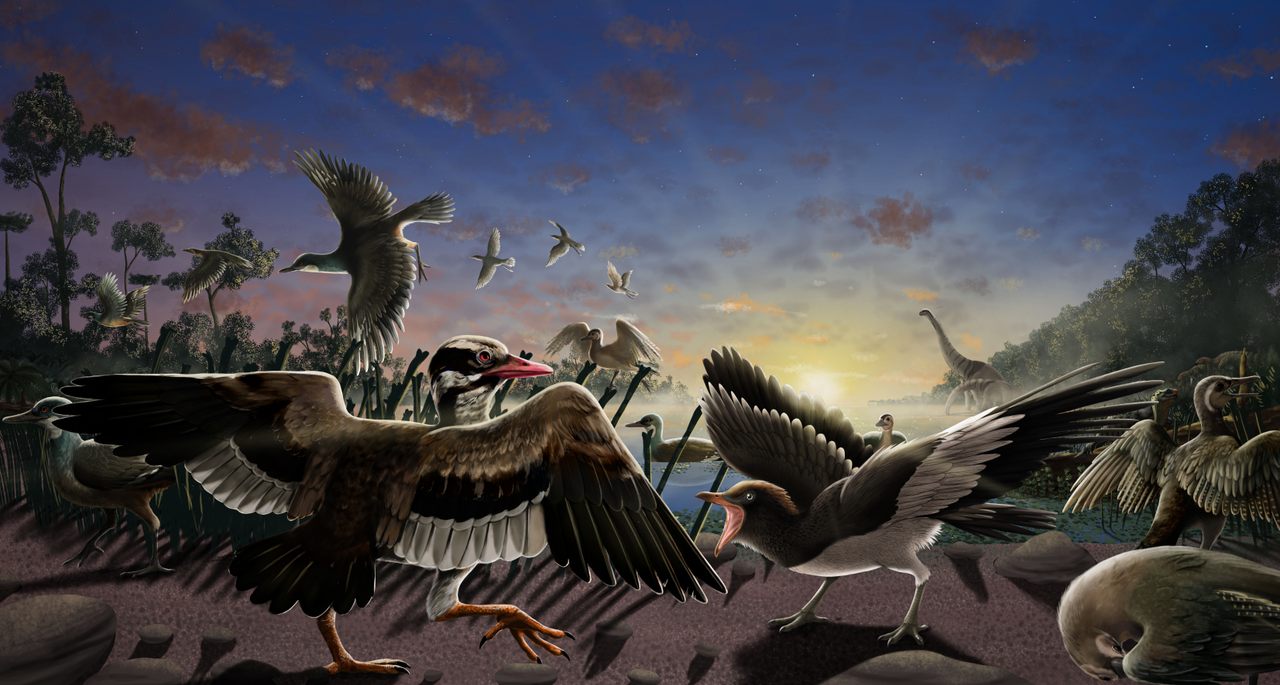 Today, the Changma Basin in China is a dry, rocky expanse but 120 million years ago it was a thriving lake teeming with Mesozoic birds. Cindy Joli, Juls Fgl, René Dávila Rodríguez/ Courtesy Jingmai O'Connor
In This Story
Destination Guide

One hundred and twenty million years ago, there was a crystal-clear lake nestled in what is now northwestern China. Soaring trees hugged the shoreline. The air was filled with prehistoric birdsong. And there, floating along in the water, was a pigeon-sized, loon-like bird known as Brevidentavis zhangi. When the bird died, its body drifted down to the lakebed. Over thousands and thousands of years, layers of sediment covered the bird’s body. The lake dried up. The bird’s fragile, delicate bones fossilized into rock. And there it waited—until the summer of 2005 when a paleontologist found its skull, complete with the bird’s tiny, prehistoric teeth.

The Changma Basin, as paleontologists now know the site, is the second-richest Mesozoic bird fossil site in the world. But among the some 120 specimens uncovered, there are only six skulls. For more than a decade after their discovery, the skulls sat unstudied. That is, until paleontologist Jingmai O’Connor, assistant curator of vertebrate paleontology at Chicago’s Field Museum, took on the task of analyzing them. She identified two new species of dinosaur birds, Meemannavis ductrix and Brevidentavis zhangi—and an unexpected avian superpower. Brevidentavis zhangi could feel with its teeth.

In an article published in the Journal of Systematics and Evolution, O’Connor and her coauthors have begun to unravel the mystery of Brevidentavis zhangi’s strange jawbone, a feature that could help explain avian evolution.

After millions of years underground and some human preservation errors, studying these specimens posed a real challenge for O’Connor. Borrowing a phrase from her colleague and coauthor, Jerry Harris, O’Connor describes the fossils as “melty bones.” The six skulls have been flattened by eons in the ground. Once excavated, they were covered in glue. Dissolvable glue is often used to stabilize fossils, but this substance was thick, shiny, and permanent. That “makes it really hard to study these specimens,” O’Connor says. Important details of the bones are almost impossible to make out.

The first step of analyzing any fossil is to determine what exactly you’re looking at. To that end, O’Connor brought in a specialized photographer to take high-resolution images of the glossy fossils. Then she drew over the photographs identifying the beginning and end of each bone, constantly checking her drawing with the fossil to make sure she was getting everything right.

In the end, O’Connor was not only able to identify two new species amongst the skulls, but a whole new genus (the taxonomic category above species) of Mesozoic birds. O’Connor named Meemannavis ductrix after Meemann Chang, the first woman to lead China’s Institute of Vertebrate Paleontology and Paleoanthropology (IVPP). Brevidentavis’s name, on the other hand, is fittingly descriptive. It means “short-toothed bird.”

Beyond its teeth, Brevidentavis had another strange feature, something known to paleontologists as a “predentary.” It’s essentially a small bone that rests right at the front of the jaw. “No one knew what this thing was for the longest time,” says O’Connor. With the help of IVPP paleontologist Alida Bailleul, another coauthor of the study, O’Connor started to research what the predentary might have been used for.

They used a CT scan to map the internal bone structures of the Brevidentavis skull and then used a chemical stain to reveal tissue structures. Those scans showed a canal where a nerve would have run the length of the bird’s mandible into the predentary. This meant that the bird would have been able to feel and sense things through its teeth and predentary. This unusual ability may have helped Brevidentavis feel around in the mucky lakebed for prey. “Nobody knew that bird teeth were proprioceptive, that they had feeling,” says O’Connor. “So that was cool!”

When it comes to the study of Brevidentavis and other Cretaceous birds—those that thrived at the end of the Mesozoic period— paleontologists are constantly trying to puzzle out why a select few dino-birds survived while the rest died out with the dinosaurs. These survivors come from one clade of Mesozoic birds (organisms that all share a common ancestor), known to paleontologists as ornithuromorpha.

The Changma Basin was once a hotbed for ornithuromorpha like Brevidentavis and Meemannavis—Mesozoic birds who were happily flitting about with no clue their world was about to end. And here’s where the predentary bone comes in. Though some ornithuromorpha survived the mass extinction at the end of the Cretaceous, all toothed ornithuromorpha were wiped out with the dinosaurs. “Indirectly you could say that toothed ornithuromorphs with predentaries were feeding on something that wasn’t available during the post impact disaster,” perhaps fish, posits O’Connor.

Paleontologist Juan Benito from Cambridge University, who wasn’t involved in the study, says these newly identified fossils help scientists understand “how you get to a duck from a dinosaur”—something that takes on new importance in today’s rapidly changing ecosystem. “In the current biodiversity crisis, it’s interesting to know which morphological features can allow a species to make it when others don’t.” Perhaps the secrets to surviving a mass extinction are buried in the 120-million-year-old rocks at a sleepy Chinese fossil site.

Meet the Woman Preserving the History of Oregon's Black Loggers

From a flightless giant heavier than a polar bear to a super-glider with a 24-foot wingspan, avians ancient and modern compete for the crown.
dinosaurs

The monstrous menace known as Whatcheeria hints that our distant ancestors may have been more like us than we thought.
Video • AO Docs

1:34
Sponsored by Visit St. Pete/Clearwater
Want to see fewer ads? Become a Member.
From Around the Web
Atlas Obscura Trips
China: The Great Cuisines of the Middle Kingdom
View This Trip
Thanks for sharing!