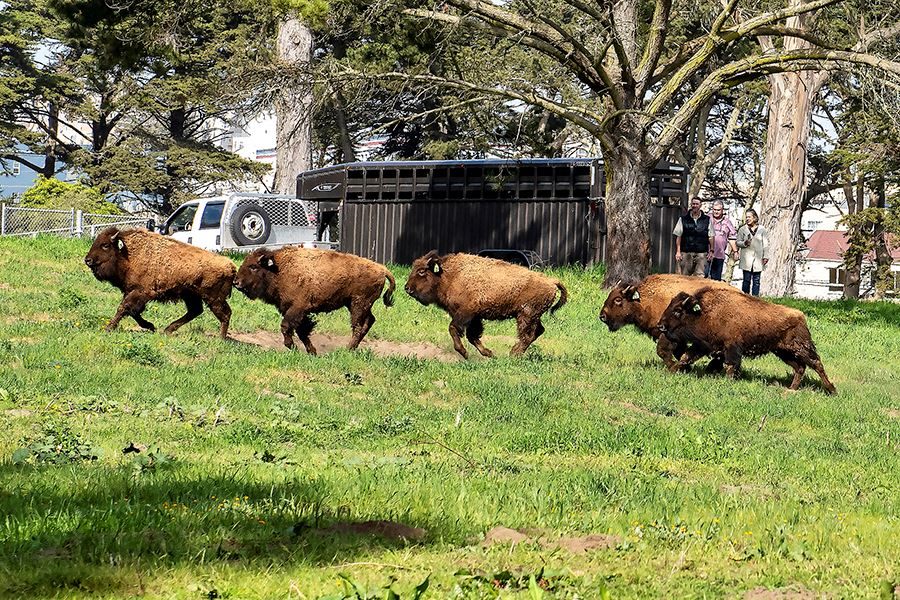 Bison were first introduced to the park in the 1890s, and these big buddies are the first new faces in the herd since 2012. Since they raced out of the trailer that carried them from a northern California ranch, the yearlings have been eagerly getting to know their new digs, as well as the five old-timers who got there first.

The youngsters will spend 30 days separated from their wizened peers by a chain-link fence, but they can scope each other out from their neighboring pastures in the paddock. As soon as the new arrivals barreled out of the trailer, they scampered right over to the barrier to say hi. “Both sides regarded each other with curiosity,” wrote the Recreation & Parks Department in a news release. (The zoo tends to the bison themselves, while Recreation & Parks maintains the enclosure.)

The amiability of it all probably has something to do with the fact that there are no guys in the bunch, Kitazono told the Chronicle. “It helps that they’re all females,” she said. In general, bison are social animals, “and when two groups in the wild are near each other, they will inevitably join up,” writes Jerod Merkle, a migration ecologist at the University of Wyoming, in an email.

But some group dynamics will be smoother than others. “Females and young males will be much more likely to group up with the current herd,” Merkle says. Merkle hasn’t studied the Golden Gate Park herd in particular, but based on his knowledge of dynamics in Yellowstone, Prince Albert, and Banff National Parks, as well as the scientific literature, he says, “adult males tend to spend most of the year on their own or in small bachelor groups.” The males typically only mingle with the rest of the herd during mating season, he adds—and then they’re likely to cozy up to several ladies.

Still, friendship won’t necessarily prevail in groups of female bison, either. “Bison live in a fusion-fission society, where their groups come together and break up on a daily basis,” Merkle adds. While the animals might group up at first, he says, there’s a chance they will split off and do their own thing.

Depending on where the young bison are in their enclosure, human visitors can sometimes catch a glimpse of them, and sometime soon, we bipeds will be able to officially welcome the bison to the neighborhood. (The park’s 150th anniversary festivities, previously planned for April 4, 2020, are postponed in light of the outbreak of COVID-19.) When they do, housewarming gifts will not be necessary—the bison have all the Bermuda grass they could want.

A conservation biologist in Argentina once hosted one of the animals in her living room, but finding them in the wild has proven far more difficult.
temples

Invasive predators and other threats have pushed the Key Largo woodrat to the brink. A small but passionate group of scientists and volunteers is pushing back.
Video • Object of Intrigue