The Strange Allure of Hundreds of Samples of Hair - Atlas Obscura 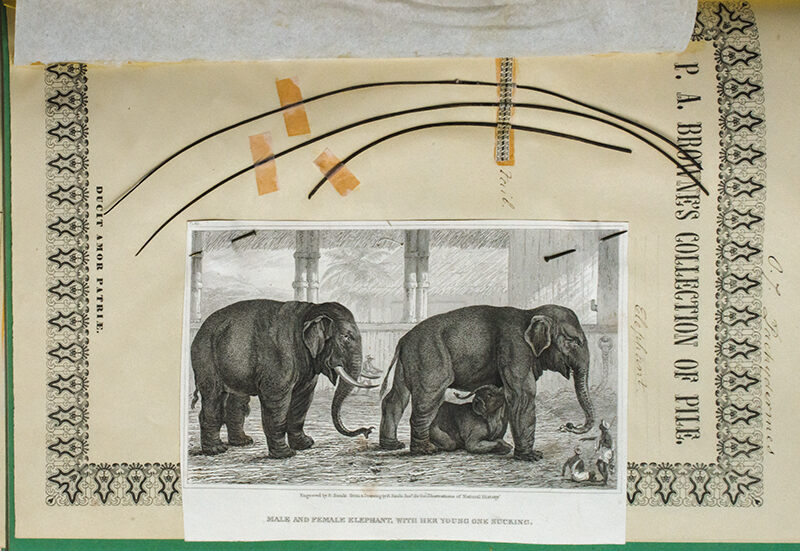 These strands of hair came from an elephant's tail. All images: Photographs by Rosamond Purcell, excerpted from "Specimens of Hair: The Curious Collection of Peter A. Browne" by Robert McCracken Peck. Copyright © 2018 The Academy of Natural Sciences of Drexel University. Published by Blast Books. Reprinted with permission.

Robert McCracken Peck was looking for a free way to furnish his largely empty apartment. Instead, he ended up saving one of the world’s preeminent collections of hair from tumbling into obscurity.

It was 1976, and Peck was newly installed as an assistant to the director of the museum at the Academy of Natural Sciences of Drexel University, in Philadelphia. He happened to start his new position on the cusp of an office move. As he fumbled his way through confusing corridors, crowded with things to haul or toss, Peck passed a few tin boxes full of cast-off papers waiting to go to the dump. Stacked, he thought, the containers might make a nice bedside table.

When he cracked the boxes open, though, he discovered scrapbooks full of hair—from famous people, from animals, from everyday folks from all walks of life. The samples were covered with tissue paper; flanked by correspondence, sketches, and detailed handwritten annotations; and encased by ornate endpapers. Their contents were “a little bit brittle, had yellowed a little bit, and oils from hair had transferred over to opposing pages,” says Peck, who is now a senior fellow at the Academy. “Otherwise, not much deterioration had occurred—it had not been exposed to light.”

At the time he thought there had to have been some mistake. Surely this unusual collection wasn’t intended for the trash. But other staffers were much less enthused about the find than he was, and were eager to get the curiosity off their hands. One told Peck that the albums were a little icky and lacking in scientific value—but Peck found them meticulous and compelling. He asked to become their custodian. “I returned to the hallway discards and with a large black marker boldly added NOT above the word TRASH scrawled at the top of the scraps of paper taped to each box,” he recounts in Specimens of Hair: The Curious Collection of Peter A. Browne, a new book about the collection.

Peck then spent years unraveling the history of this hirsute hodgepodge.

For a guy who didn’t breed or keep sheep, Peter A. Browne sure knew a lot about them—especially their wool. From the 1840s to the 1860s, he studied one strand after another in near-forensic detail. He built a contraption to test their elasticity, and measured them against hairs from a sloth, elk, grizzly, and “elephant’s beard.” He enumerated the differences between “hairy” and “wooly” sheep so convincingly that agricultural societies considered his insights essential, and he traveled from America to England to lecture on textile manufacturing.

A naturalist with a roving, rambling curiosity, he studied geology and botany before beginning the last chapter of his life’s work: a tremendous archive of hair from all sorts of creatures in most every corner of the world.

He solicited strands, tufts, and skin-backed samples from agriculturalists, curators, collectors, and even well-known humans and the occasional tree. He sometimes requested these himself. Other times, museum staff, such as Joseph Henry, the secretary of the Smithsonian Institution, reached out on his behalf.

That’s how he came to have a swatch of sea otter skin, the color of a rain cloud, and 49 samples of wool that look a bit like excised molars. On a single sheet, labeled “whiskers,” are samples from terriers, raccoons, bats, and horses, all mingled together. A blue ribbon encircles a few scraggly strands of George Washington’s hair, and a considerably bushier cluster of John Adams’s. (Browne received samples from 13 of America’s first 14 presidents. He and Millard Fillmore had a misunderstanding.)

“You could almost say that he was the world’s authority on hair, only because he didn’t have much competition,” says Peck. “Browne was something of a loner in that regard.”

With the field wide open in front of him, Browne invented his own lexicon. He dubbed his collection “pile,” from the Latin pilus (“hair”), and coined the term “trichology,” from the Greek trikhos, to describe the study of hair and fleece. He viewed the undertaking as a scientific project and a nationalistic endeavor. Across the bottom of his scrapbook ran the phrase, ducit amor patriae (“Love of country leads me”).

When samples arrived, Browne had little reason to doubt their provenance, Peck says. “No one would have thought to fake it or send something that wasn’t real because they knew this was for a scientific purpose and national collection, and there was no value to it in monetary terms.” (More recently, locks from Elvis Presley, John Lennon, John F. Kennedy, and Ludwig van Beethoven have all supposedly hit the market, fetching as much as $115,000, and follicular forgeries have become more common.)

But that doesn’t mean that Browne’s samples were all obtained or studied in a way that would pass scientific muster in the 21st century. In his analysis, “he was trying to apply some of the same principles that were being applied to other scientific disciplines that were also new,” Peck says. That entailed leaning on some of the racist biases that underpinned phrenology, including the belief that intellectual and cultural superiority manifested in physical ways. “Ornithologists were looking at birds and classifying them by the color of their feathers and shapes of their heads,” Peck says. “He was trying to look for something tangible that would separate or unite people, and hair seemed to him a good way to do it.” Browne compared the hair of people from around the world, and categorized the different shapes he saw. He summarized these—the cylindrical, oval, and elliptical—in an 1852 publication called Classification of Mankind by the Hair and Wool of Their Heads. That’s when things “went off the rails,” Peck says. “He made the mistake of trying to give them a hierarchy, which is ridiculous.”

This unsavory sociological history isn’t the reason that the collection languished, though. Browne deeded the archive to the museum in 1860, but it mostly sat in storage. Peck speculates that the reason it became “one of the Academy’s least-known holdings” was that the practice of collecting hair probably seemed, to many scholars, commonplace and unworthy of their time. In the Victorian era, hair was often fashioned into keepsake trinkets and memento mori. Past curators may have considered the collection “a sentimental fetish more than a legitimate scientific discipline,” Peck says.

On those rare occasions when the collection has become a topic of any public discussion, it’s been in conjunction with politics—including the party convention in 2016 in which many people were buzzing about a certain future president’s improbable yellowed locks.

The scrapbooks will be on view at the academy for a three-month run beginning November 14. Every few weeks, the staff will flip the pages to protect the samples from light and give repeat visitors something new to see. “We want to show people as much of it as we can,” Peck says.

Meanwhile, Peck has taken up Browne’s work himself—at least the famous hair collection part. A few years ago he queried the White House for a bit of Barack Obama’s hair, and when Bill Clinton accompanied Hillary to the Democratic National Convention in 2016, Peck joked in a news release that “my shears are ready, if our former president is willing.” If he has his way, the collection will keep growing.

Masks, ventilators, and Zoom recordings may one day be the artifacts of our time.
objects of intrigue

Natural history collections are topping their specimens with replicas.
Video • Wonder From Home

Why Doesn't Iceland Have a Museum of Napkins?

An investigation.
Read more
Thanks for sharing!