The Most Dangerous Things You Can See in Museums - Atlas Obscura
Want to see fewer ads? Become a Member. 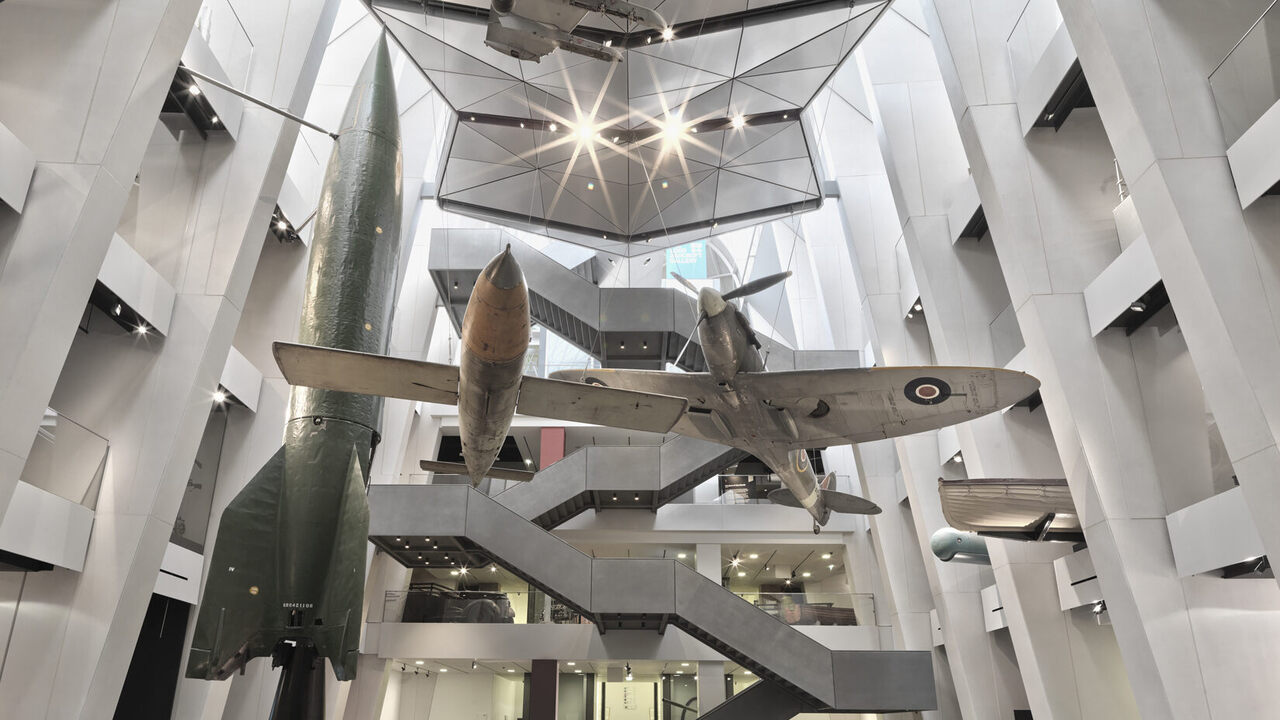 The V-2 rocket (left) in the atrium of the Imperial War Museum in London. © IWM
In This Story
Place

“They say you're judged by the strength of your enemies”—James Bond, Quantum of Solace.
Place

This massive collection of British military artifacts includes the heartbreaking personal letters of the men in the trenches of WWI.
Place

America's most famous museum of medical oddities, and home to the remains of Einstein's brain.

There are a lot of kinds of danger. Some threats are loud and obvious, others are covert and subtle. Some are immediate, others take months, years, or centuries to develop. We got some of each kind when Atlas Obscura contacted museums that know danger—places dedicated to weapons, espionage, natural history, and disease—and asked: What’s the most dangerous thing in your collection?

We got everything from berries to bombs, from flammable nitrate films to radioactive dust. What this diverse group of objects share is the way that they remind us that there are shades of danger everywhere—in the sky, in the ground, and deep beneath our own skin. In short the world has innumerable ways to hurt you, and they’re often fascinating.

When people think about dangerous specimens in natural history collections, they might imagine rattlesnakes or scorpions, “but there’s a lot of plants that can do you harm,” says Christine Niezgoda. She would know. As the collections manager for the flowering plant collection at Chicago’s Field Museum, Niezgoda has millions of specimens under her care, and some of them were once highly poisonous.

One such object is an herbarium of pressed hemlock, the plant that felled Socrates, though it is sub-lethal because rootstalks—the most potent portion—are absent. Other poisonous plants include rosary peas, belladonna, wolfsbane, and castor beans, which contain the toxin ricin. Luckily, most of what you see on display couldn’t possibly hurt you, since many of the museum’s plant installations are made from wax. “You can’t display the richness and the way they look in nature with a dried specimen,” Niezgoda says. So researchers bring back specimens from the field and model leaves, berries, and bark to represent the the more-desiccated specimens organized behind the scenes.

Niezgoda isn’t taking any chances, though. She keeps all of the poisonous plants in a locked cabinet in a portion of the museum that’s only accessible to researchers and staff. “I don’t want to be responsible for someone trying to eat one.”

In 1921, Marie Curie was on an American publicity tour that also conveniently served as a chance to replenish her supply of radium. When she passed through Pennsylvania, she presented the College of Physicians of Philadelphia with a piezoelectric device built by her husband and collaborator, Pierre. It was the first instrument designed to measure radioactivity. The problem was, the contraption was also radioactive itself.

“Everything in the Curie lab—the pencils, paper, desk—was radioactive,” says Mütter Museum curator Anna Dhody. “They didn’t understand the safety protocols. They were using radium for years and years and years. It was the halcyon days between the time when radium was discovered and the time they realized, ‘Oh, this stuff can kill you.’” That window allowed in an industry of radioactive consumer goods, from lipstick to jewelry.

The piezoelectric machine was placed on view at the College, which houses the Mütter Museum. It was stored in a large case for decades, until the 1980s, when a visiting physician asked whether anyone had whipped out a Geiger counter to make sure it was safe. They hadn’t. “Sure enough, it was radioactive,” Dhody says.

The threat of radioactivity is a matter of exposure and dosage, Dhody says. We’re exposed to the rays every day. An annual visitor to the Mütter would have no ill effects, and neither would a curator making weekly rounds, probably. Even so, to be on the safe side, it was pulled off display and received a thorough cleaning to remove any loose radioactive particles.

When she became curator in 2007, years later, Dhody went looking for other potential dangers. The staff scanned storage facilities for mercury vapors, because “lord knows how many broken thermometers” have shattered down there, she says. She also wields her own $100, battery-operated radiation detector, “because I’m a little paranoid now,” she adds. “Every new donation that comes into the museum, no matter if it’s associated with anything radioactive or not—even if it’s a bar of soap—I scan it. Trust but verify, you know?”

It’s no surprise that England’s Imperial War Museum has a vast collection of past threats, namely weapons. The collection also includes objects that weren’t intended to be dangerous but are now, such as old nitrate films of historic battles, which are highly flammable. (They’ll be moved to the British Film Institute for long-term storage in a sub-zero facility, says Rhodri Cole, the museum’s corporate communications officer.)

One especially visible reminder of the war’s devastation stands in the atrium of the London branch. The hulking V-2 rocket, terror of the homefront, stands just yards away from the site where one of the ballistic missiles dove into an apartment building and killed 43 people in 1945.

V-2 rockets were cruelly ingenious in their speed and stealth. Fueled by alcohol and liquid oxygen, the missiles arrived “unseen and unheard,” packing a ton of explosives at 3,500 feet per second, the museum states. Some 1,054 of them reached Britain between September 1944 and March 1945. Tens of thousands of workers lost their lives constructing the high-octane explosives, BBC reported, even before they killed several thousand people upon arrival. This rocket has been in the museum since it was brought from Germany in 1946. At almost 46 feet tall, it nearly grazes the ceiling. The V-2 carries a Free Form Explosives Certificate, last updated in 2012, confirming that it is now safe.

For years, green wallpaper had a frustrating habit of fading, or spoiling into a brownish hue. That changed in 1775, when Carl Wilhelm Scheele devised a green pigment to last. The green is still blazing in the floral scene on the museum’s 1836 sample, long after the rest of the design had aged to a ghostly outline. Unfortunately, the chemical that accounts for that staying power is dangerous. The paper is lousy with arsenic.

The risk of poisoning wasn’t limited to licking or nibbling on the wallpaper, says Gregory Herringshaw, the museum’s curator in charge of wall coverings. “The toxins are released mostly when they’re handled—rolled or unrolled, or when you’re pasting the back, which adds moisture,” Herringshaw says. That moisture kickstarts reactions that release the toxin into the air, he adds. When they’re off display, such objects are wrapped in glassine tissue and tucked in a mylar folder. Stored at a consistent humidity and rarely subjected to handling, the curator says, they don’t pose much of a threat. He doesn’t even wear gloves when he handles them, but “Of course, I do wash my hands immediately after.” And he does like to show them off. “Especially students, just for the shock value,” he says. “They all kind of step back when you tell them it’s arsenic.”

The Museum of Human Disease, housed within the University of New South Wales School of Medical Sciences in Sydney, Australia, holds 2,000 tissue specimens as much as a century old. A few of these samples pose potential risks, even today. “We have prion diseases, like ‘mad cow disease,’ which may still be virulent,” says Dean Lovett, the museum’s education officer. “We also have a specimen depicting asbestos, which is a major contributor to mesothelioma and other very serious diseases.” Other samples aren’t risky to the people who encounter them, but testify to the ubiquity of everyday dangers. One diseased lung, for instance, illustrates the deleterious effects of smoking.

This slice of brain tissue shows the hemorrhage that a 57-year-old woman suffered as a result of a stroke. Smoking also dramatically increases risk of strokes, and worsens the damage that they cause. Like many other objects in the museum’s collection, this one reminds viewers about lethal pathologies that are everywhere, but hardly ever so visible.

The International Spy Museum—a nonprofit institution in Washington, D.C.—is full of curious examples of subterfuge. There’s a lipstick canister that shapeshifts into a 4.5 mm pistol, for instance. And then there’s these eyeglasses, which hold a lethal secret.

The story goes like this: If a captured intelligence operative was worried about buckling under intense questioning, he or she could nonchalantly nibble on one of the temple tips. The spy would appear to be gazing off into space, lost in thought. In fact, the action would release a small cyanide pill—and even that little dose promised a swift death. Such devices might be found across the world of international spooks, but the museum traces this one to the CIA.

“Spy artifacts, or spy tools, are created intentionally not to be tracked down, or tracked to their original owners,” says Aliza Bran, the museum’s marketing coordinator. “It’s a weird case.” The museum authenticates its arsenal of dangerous devices with the input of an advisory board consisting of former members of the KGB, CIA, FBI, and other agencies that you know nothing about, in case anyone asks.

"Waterloo teeth" represent a more ghoulish time in the history of dentistry.
radioactivemissilespoisondiseaseweaponscollectionsfeaturesmuseums

Beyond the "Southern Cross," there are dozens of symbols of the Confederacy.
poison

Before you can decolonize a museum collection, you may need to decontaminate it.
museums

Why Doesn't Iceland Have a Museum of Napkins?

The biggest blow to beer since Prohibition.
Video • PinDrop

A Museum's Treasured Tradition of Identifying Fossils for the Public

Including the occasional turd.
Read more
Thanks for sharing!