In Mongolia, a Mysterious Island Ruin Is Finally Giving Up Its Secrets - Atlas Obscura
Want to see fewer ads? Become a Member. 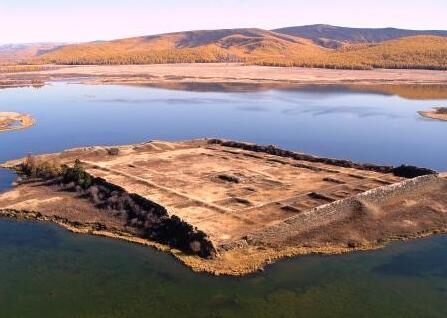 The site has remained derelict for the past 1,243 years. Por-Bajin Fortress Foundation / CC BY 4.0
In This Story
Place

The Uyghur settlement in the middle of a lake continues to raise questions.
Destination Guide

On a balmy summer day in what is today southern Russia, a tree was felled for a monumental construction project: a palatial set of buildings that would never be used. The rectangular foundation of the structure was laid about 30 miles from the Mongolian border, on an island in Lake Tere-Khol.

Since its presence was learned from a stone near the Selenga river (a runic tablet with an inscription detailing the site), the settlement—known as Por-Bajin—has eluded understanding. A complex roughly the size of Buckingham Palace, with 30-foot-tall clay walls and numerous courtyards set alongside its numerous buildings, the eighth-century Uighur construction yielded surprisingly few of the archaeological artifacts you’d expect from a building of its magnitude—items that are usually telltale markers of a place’s purpose.

“There was a lot of mystery around the site,” says Margot Kuitems, an isotope researcher at the University of Groningen in the Netherlands and lead author of a new study that dates the site, published last week in the journal Proceedings of the Natural Academy of Sciences. “Who built it? When was it built? But also for what purpose? Was it a monastery? Did it have defensive purposes? Or was it a palace?”

Now researchers may finally have some answers to those questions—answers they gleaned from the fickle fluctuations of solar radiation and the felled timber itself.

In 2012, a Japanese research team identified two historical spikes in atmospheric carbon dioxide—the compound essential for dating ancient organic matter, from tree rings to human bones. Every year, the amount of carbon in the atmosphere changes. Most of the time these changes are subtle. But in the years 775 and 994, the researchers demonstrated, the amount of carbon floating around jumped, possibly due to increased solar activity.

Whatever the cause, the carbon spikes were swallowed up by medieval trees around the globe, from the Japanese cedars the team inspected to the stands of central Asia—including that tree that was eventually chopped down and incorporated into the foundation of Por-Bajin.

“More and more of these spike events are [being] found now, but these two [in 775 and 994] are the biggest found so far,” says Kuitems. “We can use these distinctive features in radiocarbon to anchor tree rings in calendar time.”

Like bones, trees generally develop concentric “rings” of growth for each year of life. Attached to these rings, but hidden to the human eye, are reflections of the carbon levels in those years. Using the wood sample from the settlement’s foundation, Kuitems’ team was able to link the 43rd ring on the fallen timber to the carbon spike of 775. Two years later—during the development of the tree’s 45th ring—the tree was cut down. Simple addition allowed the team to conclude that the foundation of Por-Bajin was laid during or after the year 777.

History fills in the rest of the mystery. Tengri Bögü Khan, the head of the Uighur Khaganate—an empire that existed between the eighth and ninth centuries—had converted to Manichaeism, a gnostic faith, and made it the state religion. Many under the khan were unhappy with the move, and two years after the foundation of Por-Bajin was laid, Bögü Khan was killed in an anti-Manichaean uprising.

Based on the absence of a human presence at the site, and the timeframe of its probable construction, Kuitems’ team believes that Por-Bajin was neither a palace nor a fortress. It was a place for Manichaens to pray—a monastery.

“It’s pretty logical it was never used.” Kuitems says. “There was evidence that the construction period took only about two years. It makes perfect sense that [that’s how long it took to build, and that] right after it was built, the leader was killed, and it was completely abandoned.”

Next, Kuitems says, is the tricky work of teasing out the more subtle deviations in atmospheric carbon, in hopes that more archaeological mysteries can be solved.

“I think this is the future direction of radiocarbon dating,” she says. “There’s more focus now on annual precision. We get more knowledge into these anomalies that were previously hidden in the radiocarbon calibration curve.”

The precise dating of the settlement enabled the researchers to draw a logical conclusion, based on historical evidence, that otherwise would have been impossible. While the conclusion is not set in stone—Por-Bajin’s fortifications are made of clay, after all—it paves the way for future radiocarbon revelations.

14 Lesser-Known Ancient Sites Worth Building a Trip Around

Up close with the 7,000-year-old Dolmen of Guadalperal.
science

The Bones at India's Mysterious 'Skeleton Lake' Came From All Over

New research reveals that the hundreds of anonymous dead spanned both continents and centuries.
Video • PinDrop

The discovery, in a city famed for its Roman ruins, may mark the site of England’s first coronation.
Read more
Thanks for sharing!