After 65 Years, a Wild Ass Is Back in Eastern Mongolia - Atlas Obscura
Want to see fewer ads? Become a Member. 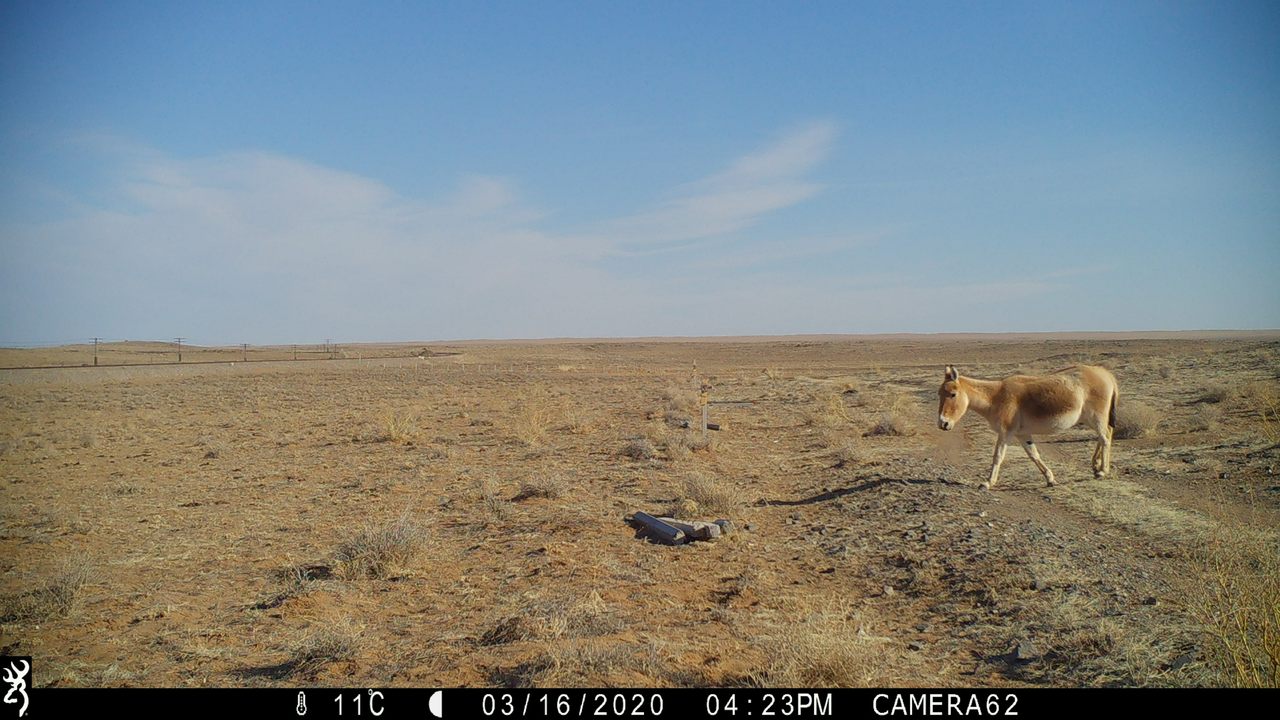 This intrepid individual was the first khulan to set foot on the eastern steppe since 1955. Courtesy Kirk Olson / WCS
In This Story
Destination Guide

When a railway was laid across Mongolia’s vast expanse, it cleaved the country in two. Constructed in the mid-20th century as a conduit through the Gobi Desert, the rail stretches from southern Russia into northeast China. But the railroad was, of course, built for humans. Which means its builders overlooked how it would affect other species, including the ungulates of the region—most notably Mongolia’s khulan.

Once the track was laid, the damage was done. The khulan, a Mongolian subspecies of the onager, or Asiatic wild ass, soon vanished from the country’s harsh eastern steppe, through which the railway runs.

Back then, in the 1950s, Mongolia “was nearly Terra Incognita,” says Kirk Olson, the Mongolia conservation director for the Wildlife Conservation Society (WCS), via email. “The Gobi-Steppe dwarfs the Serengeti ecosystem in size. The [Mongolian] ecosystem has been defined by the boundary of the range of khulan and Mongolian gazelles.”

In the mid-20th century, the northern stretches of the country housed an eclectic assortment of nomadic herders, remote villages (some of which would soon host train stations), and, of course, the denizen species of the desert—khulan among them. But with the arrival of people, coming through in (relatively) large numbers, the khulan took leave.

“What seems to have occurred is that when the corridor fencing was put in place to keep livestock and people off the tracks (and probably also to prevent vehicles from trying to drive across), the khulan were no longer able to move freely,” Olson says.

A staple species of the steppe ecosystem, the khulan—a tawny, quarter-ton cousin of the donkey—found itself without 6,500 square miles of land on which it used to roam.

“It was often explained to me by some of the older herders when I was first working in Mongolia that [Soviet] soldiers would hunt khulan with great intensity,” says Olson. “The combination of hunting pressure and harassment, herders occupying natural water sources, and the completion of the railroad were likely all interacting to cause their disappearance from the east.”

But with scant field research at the time, Olson says, it’s hard to say for sure. One thing is certain, however: The last time a khulan was reported crossing the tracks was in 1955.

Until now. On March 16, a khulan was seen for the first time in 65 years, about 500 miles from Ulaanbaatar.

Since then, the WCS team has removed a small section of wire fencing from the concrete posts on either side of the tracks, creating a 2,300-foot gap in the hope of opening a wildlife corridor for the diverse species in the area. Herds of Mongolian gazelles began bounding across in no time, but the khulan were more skeptical—until one individual cautiously made the first steps back eastward.

It was a momentous event that happened far more quickly than the team had expected—“a result that could be compared to throwing a dart and hitting the bullseye from [65 feet] back,” Olson says.

It remains to be seen how these ungulates will adapt to their former territory. But one small hoofstep for the khulan certainly represents a larger step for this long-lost species of the steppe.

Georgina Mace helped change the way both scientists and policymakers see living things, including the most vulnerable.
science

With a new train line threatening its habitat, the big cat may be the key to protecting this Mexican reserve—and everything else in it.
monkeys