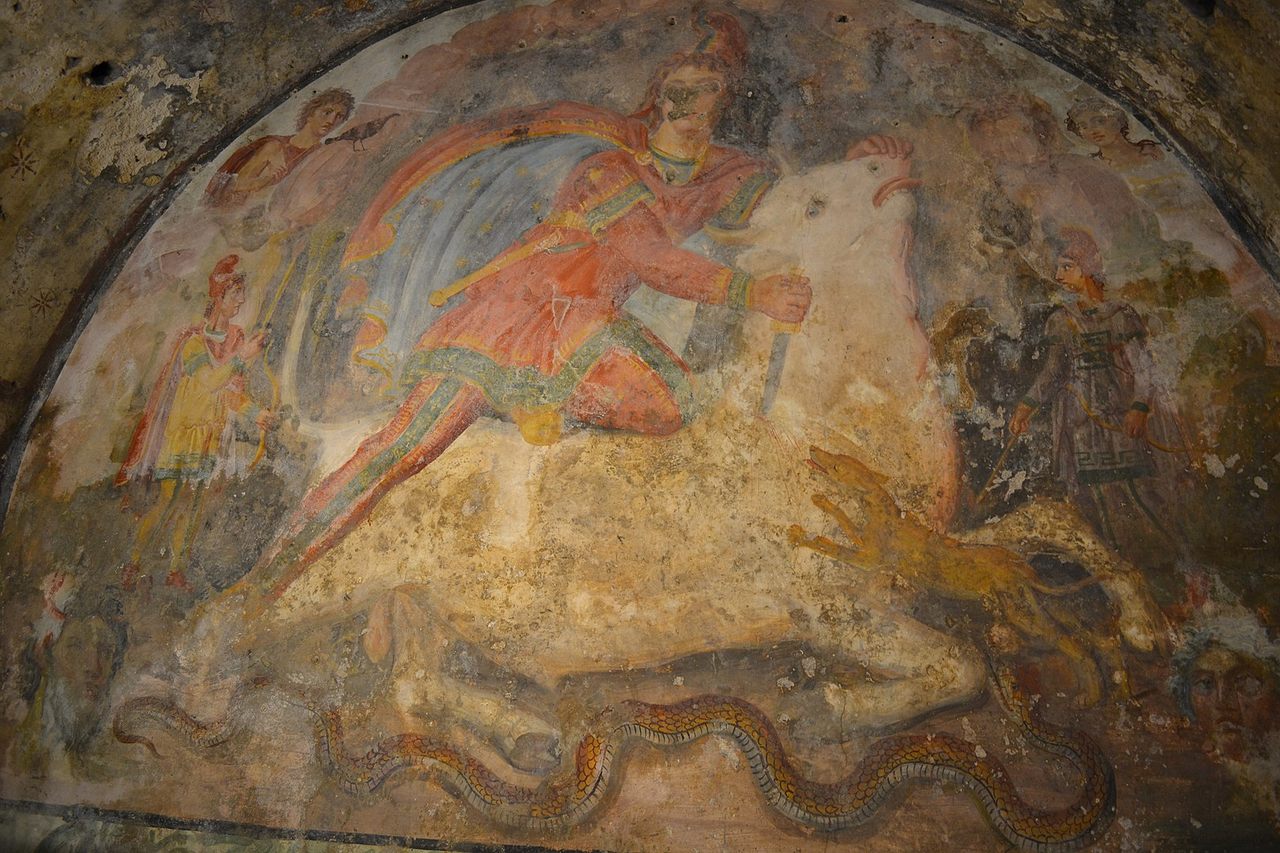 The tauroctony in the Mithraeum at Santa Maria Capua Vetere. Dom De Felice/CC BY-SA 3.0
In This Story
Place

Rebuilt remains of a temple to Roman god Mithras.
Place

The Mithraeum at Circus Maximus

The underground sanctuary of a mysterious ancient cult.

A faded painting, still showing hints of its once-vivid hues, fills the entire back wall of an otherwise grim underground cavern in Santa Maria Capua Vetere, Italy. Sculptures and frescoes of ancient gods and cryptic celestial symbols are scattered throughout the interior. A stagnant darkness lurks within the corridor, as the lack of windows forbids any stray sunlight to penetrate the ancient cave.

This subterranean temple is just one of more than 400 such structures that have been uncovered within the vast territory once overseen by the Roman Empire. It, like the others, is a relic from a mysterious ancient religion that continues to pose a challenge to most modern scholars.

Mithraism was an underground Roman religious group that worshipped a pagan deity called Mithras. All Mithraea featured a tauroctony, an image of the god Mithras slaying a sacred bull, as its centerpiece. Though the covert religion was once so widespread some historians considered it an early rival and “sister religion” to Christianity, little is actually known for certain about it.

The secretive cosmology of Mithraism has baffled people for nearly 2,000 years. Members of the cult-like religion don’t appear to have left behind any reputable written accounts of their inner workings, and if they did, the documents have joined the many other primary historical sources lost to time. So scholars, spanning from ancient Greek and Roman writers up to modern-day academics, have been left to decode the mystery religion with the clues they’ve uncovered within the Mithraea, their underground temples. As David Ulansey writes in his book The Origins of the Mithraic Mysteries: Cosmology and Salvatio in the Ancient World, the unexplained artwork “constitutes one of the great unsolved puzzles of classical and religious scholarship.”

But Ulasney thinks he may have solved the puzzle. According to his theory, the cult’s central iconography is a star map. The bull Mithras kills in the tauroctony is actually the zodiac Taurus. By slaying Taurus, the god is therefore responsible for shifting the precession of the equinoxes. This cosmic movement was secret knowledge shared among indoctrinated members of the ancient cult during a time when the universe was still seen as a stagnant entity.

His hypothesis is one of the few relatively recent attempts to explain the core secrets of the mysterious cult. Even the namesake of the religion is shrouded in mystery. Ancient Romans believed Mithras was based on a Persian god, though most modern scholars have since debunked this theory.

According to Ulansey, he’s actually Perseus, the Greek hero, hidden in a realm beyond the cosmos. But according to Michael Speidel, he’s actually Orion. Roger Beck argues viewers shouldn’t read the tauroctony as a star map, as there may not actually be a constellation to match Mithras. Abolala Soudavar is one of the few minds to believe Mithraism actually has Persian roots.

Yet despite these theories, modern historians and archaeologists who’ve attempted to piece together tidbits of information from Mithraic artifacts are no closer to revealing the cult’s secrets with absolute finality than the Romans were millennia ago when they dubbed the cult the “Mithraic Mysteries.” As Manfred Clauss concedes in his book The Roman Cult of Mithras: The God and His Mysteries, attempting to decipher these celestial clues, “cannot be done without making assumptions that are themselves highly speculative.”

Mithraism was originally understood as a “star cult” with strong ties to astrology and astrotheology. The zodiac symbols hint heavily at the cult’s connections with the celestial world, though what exactly those connections entailed is still a conundrum. As scholars seem to agree, cracking the code of the iconic tauroctony would likely reveal the core of the cult’s theology. But as of yet, it’s all still an educated guess.

What is known for certain is that Mithraism arose sometime during the first century, and continued spreading throughout the Empire until it eventually disbanded toward the end of the fourth century. Though archaeologists believe its epicenter was in Rome, the cult’s followers were scattered across the continent. Remains of Mithraea have been unearthed in what would have then been far-flung places including Turkey and England.

Visiting the uncovered Mithraea is the closest historians and curious travelers can get to witnessing what the long-gone initiates once experienced while hunkered within their dark, dank temples. At the London Mithraeum, which opens to the public on November 14, there’s an immersive, multi-sensory exhibit that attempts to recreate what may have happened within the temples. The curators use a blend of visual and auditory special effects to show visitors their best guess as to what a Mithraic ritual may have looked like.

After the cult disappeared, its temples were shuttered and buried, and the religion was largely forgotten until excavations in recent centuries unearthed it once more, giving modern academics a chance to piece together a puzzle ancient scholars failed to solve.

The Mysteries were a secretive group, its members only fully welcomed after completing seven harrowing levels of initiation which have since been linked to the planets. According to a poem written by an ancient Roman poet named Proficentius, initiates were called syndexioi, which loosely translated from Latin means they had been “united by the handshake.” Meetings were, literally, underground operations. Members gathered in dark, subterranean temples, sometimes built inside caves, to feast and worship within windowless walls adorned with religious artwork.

Most scholars believe the Mysteries were an all-male secret society. However, others, including the ancient Roman philosopher Porphyry, have proposed there may have been a few female initiates as well. The religion was popular among Roman soldiers, which could potentially explain why it became so widespread, and would also lend credence to the theory it was some sort of super secret boys’ club. In addition to soldiers, merchants, bureaucrats, and slaves all found sanctuary in the temples, brought together by a shared theology and structured social hierarchy.

The artwork that adorned the inside of the Mithraea, as well as the scrawls of graffiti etched onto the walls, provide the largest pool of information for scholars to wade through while attempting to decipher this enigmatic cult. The paintings, frescoes, and sculptures show that though Mithraism was dispersing throughout the Roman Empire during the same time period Christianity gained traction, its focus on a singular god is different from the now-prominent monotheistic religion. Unlike Christians, the mysteries didn’t look to the Heavens. Instead, they sought out the stars.

Each Mithraeum mirrors a common image of the cosmos, with Mithras at the center of it all. As Roger Beck describes in his book The Religion of the Mithras Cult in the Roman Empire: Mysteries of the Unconquered Sun, “The stars spill out over Mithras’ tunic, giving the god a peculiar transparency, as if he belongs both in the universe of the painted cave and in the universe of stars and planets framed by the cloak—which of course he does because the universe at all levels is his.”

In the central tauroctony, found in a Mithraeum, Mithras pins the beast to the ground, one hand firmly clutching its nostrils, the other plunging a blade into its flesh. The man and slaughtered bovine are usually accompanied by an assortment of other creatures, typically a dog, scorpion, snake, and raven, as well stars and other figures from the zodiac. Sol (god of the Sun) and Luna (goddess of the Moon) are frequently present as well.

The dark caverns usually contained additional scenes from Mithras’s story, such as the god feasting upon the dead bull or a youthful Mithras being born from a rock. Celestial images are abundant: they line the god’s cape on the tauroctony, surround him as he slays the bull, and may have even adorned the ceilings.

But what, exactly, does all this star-studded decor actually mean? That is, perhaps, the biggest mystery the Mysteries left behind.

Found: The Wreck of Chile's 'Titanic'

Nine Places To See the Ruins of Ancient Religious Cults

To uncover new clues about the secretive world of Mithraism, scientists considered evidence right at their feet.
temples

Join us for a daily celebration of the world’s most wondrous, unexpected, even strange places.
temples

From Kushites to Christians, an old site in Sudan has new stories to tell.
Video • PinDrop