These Bugs Armor Themselves in Tiny Shards of Colorful Trash - Atlas Obscura
Want to see fewer ads? Become a Member. 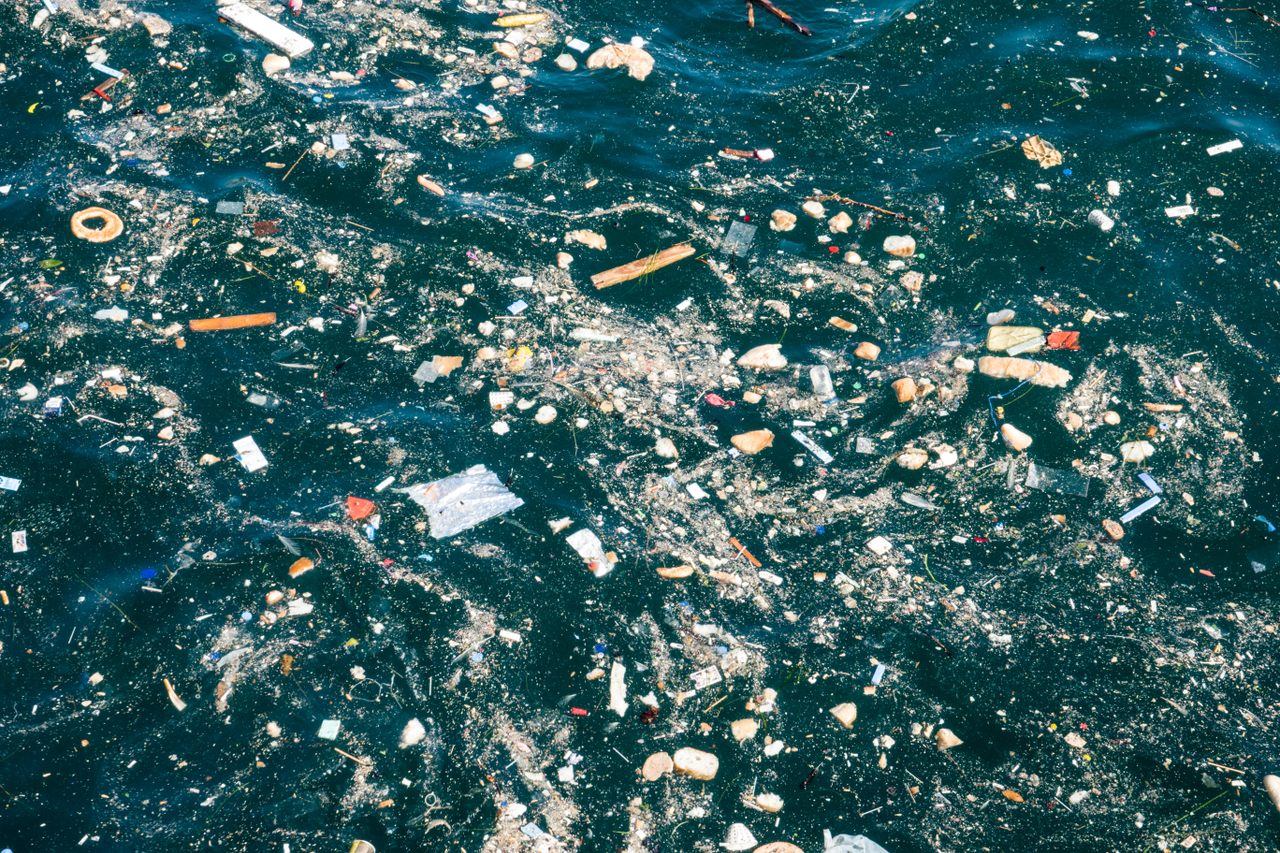 Plastics appear in water and on shorelines all over the world. Microplastics—shards less than five millimeters long—are even turning up in the cases that some aquatic larvae make to protect themselves. Paul Kennedy / Alamy Stock Photo
In This Story
Destination Guide

As humans fill the world’s waters with microplastics, the tiny synthetic shards are making their way through food webs. But one insect is making the most of the pollution—to its own detriment. Instead of noshing on the little bits of plastic, a species of caddisfly called Lepidostoma basale is hunkering down beneath them.

The larvae—which are found across Europe, including Germany, the United Kingdom, Spain, and elsewhere—live inside cone- or tube-shaped cases that they build themselves. Typically, the insect architects construct these homes out of sand. But field researchers in Germany have recently noticed that some of the cases are also studded with tiny microbeads, fragments, films, and fibers—jagged, translucent little chunks that can look milky-white or icy and blue.

To figure out how the larvae are using our trash, researchers from the German Federal Institute of Hydrology brought some of the youngsters into a lab and watched them work.

The researchers gathered larvae by hand from a stream called Brexbach, in the town of Bendorf, by plucking them, safe and sound in their cases, from bits of wood in the water. (The larvae use silk to tether themselves to the slick wood, but it’s easy to yank the 0.16-inch-long cases free without causing harm.) The crew carted them back to the lab in little water-filled containers freckled with leaves, which make for welcoming hiding places. Then they put them in petri dishes beneath a microscope and used blunt probes to gently nudge them out of their cases, so that they’d quickly get to work building new shelters.

When the researchers presented the tiny builders with both sand and two types of high-density microplastics—including fine bits of PVC, which sink in the water and mingle with the mineral grains on the bottom—they found that, over a 48-hour construction blitz, 79 percent of larvae with access to microplastics seized on those first before switching to sand.

That’s “probably because plastic is lighter than sand, and it is therefore easier for the larvae to lift the plastics and to quickly use it to cover their soft bodies,” says Sonja Ehlers, a biologist at the institute and lead author of the four-person research team’s new paper in the journal Environmental Science and Pollution Research.

Those shards may be easier for the larvae to wrangle—but trouble is, the plastic-studded cases are less stable than the ones made from compacted sand. And that can make the larvae more vulnerable to being gobbled by juvenile dragonflies and brown trout, the researchers write. (The plastic-encrusted cases, which look like tiny bits of rock candy, make for awful camouflage too.)

The effects of fewer caddisflies could ripple throughout the ecosystem, Matt Simon writes in Wired, because L. basale is a prodigious eater of woody debris and aquatic plants, including algae, and helps keep the vegetation from getting unruly. As winged, terrestrial adults, they’re also tempting meals for bats, frogs, and other critters.

There’s still a lot to learn about how animals live alongside fragments of plastic—large and small. Many species of birds, for instance, from ospreys to brown booby seabirds, have woven plastics into their nests. Ehlers is curious about whether terrestrial insects, such as termites, might also incorporate landlocked microplastics into their mounds, alongside natural grains. She’s likewise keen to learn whether the plastics could release toxins—and if so, how they might affect the larvae camped out so close to them.

In the meantime, the best way to cut these caddisflies a break is to clean up our act. Ehlers and company presented the larvae with a concentration of microplastics that mirrored the concentration in the Rhine River (where the Brexbach eventually discharges, after entering the Saynbach river). Wandering the bank of the Rhine, she says, you might see “a lot of plastic bags hanging in the trees—so light they can be lifted up and carried away by the wind.” Even in the quieter, less-trafficked Brexbach, where the researchers collected the larvae, they spotted bits of plastic bobbing on the surface.

If you’re offloading something light, prone to flying away on the breeze, make sure you’re discarding it in a bin with a lid, Ehlers says. (Or avoid it in the first place.) If you won’t do it for yourself, do it for the larvae.

Make a Colonial American Cocktail With Ale, Rum, and Fire

The West Is Being Won by Tiny Bits of Plastic

Natural landscapes are seeing huge amounts of microplastics tumbling from the sky.
science

Sharks, beavers, and humans are all returning to London's iconic waterway thanks to decades of restoration work.
mines