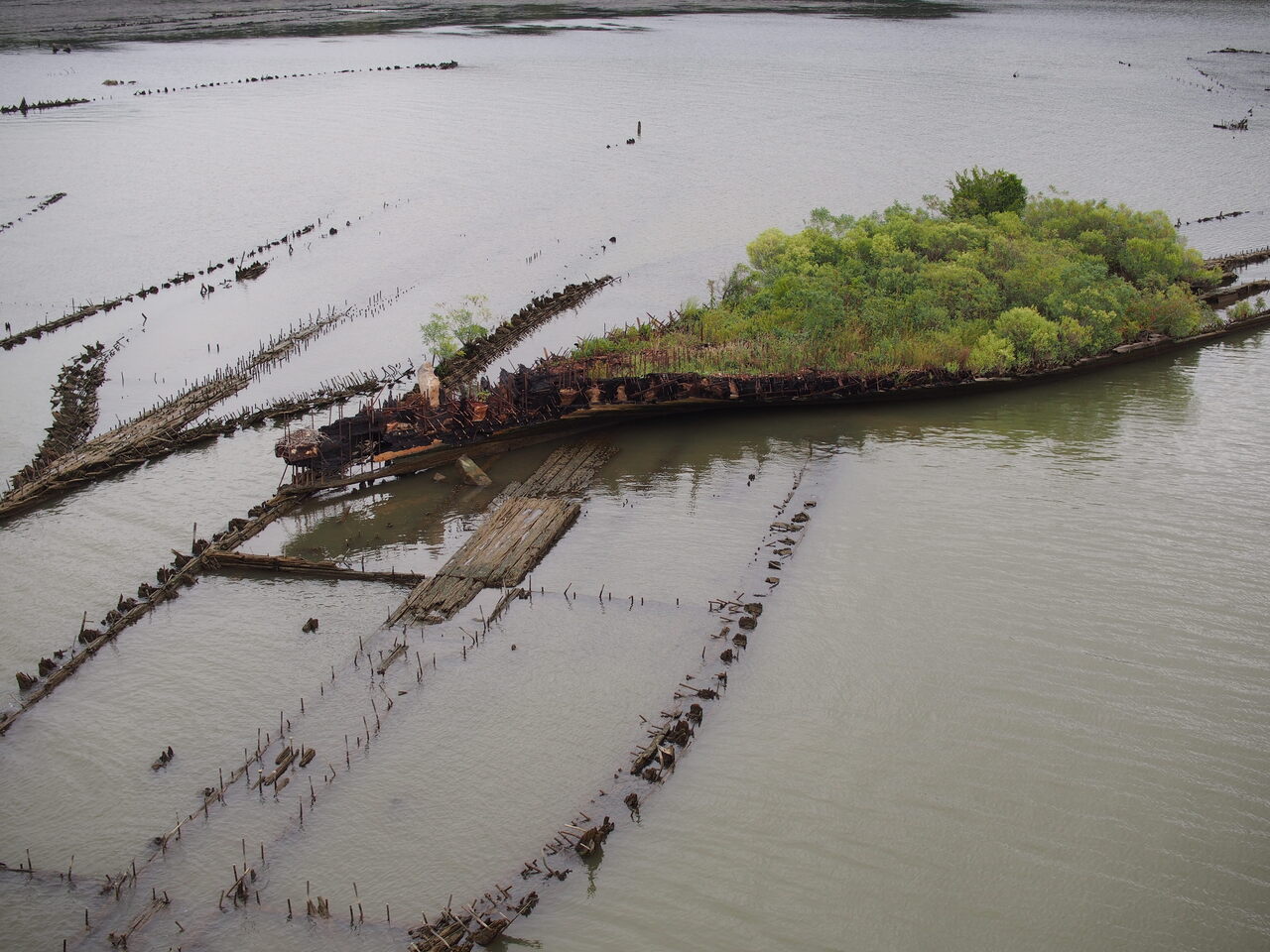 The wrecks are visible from drones too. Maryland Department of Natural Resources/Marine Robotics & Remote Sensing, Duke University
In This Story
Place

The Ghost Fleet of Mallows Bay

The remnants of a wooden-hulled fleet built and abandoned in WWI, now home to a thriving ecosystem.

If you were to circle Mallows Bay from the air and capture a view of the water at low tide, you would see a battalion of almond-shaped silhouettes. Some sit just below the surface, a little darker than the murky water above them. Others look more like waterlogged traffic medians—long, skinny, and stippled with vegetation.

You would be gazing down at a sodden, sprawling graveyard—the final resting place of roughly 200 boats, including about 100 wooden steamships known as the Ghost Fleet. The custodians of these wrecked, rotten, and rusty ships just got some peace of mind, even as their charges fall to pieces: This nook of the Potomac River—some 40 miles south of Washington, D.C., and close to Nanjemoy, Maryland—was recently designated a National Marine Sanctuary.

The ships weren’t designed to end up there, moldering near the shore. The wooden vessels were built about a century ago, as a part of America’s preparations for World War I.

In 1917 the U.S. Shipping Board needed more boats—fast. America was at war, and waters were prowled by dangerous German U-boats. To square off against them, the board wanted to produce 1,000 new vessels over 18 months. But building a fleet was expensive—each ship cost somewhere in the neighborhood of $1 million to make—and there were relatively few skilled laborers to take up the task.

Then again, this was an emergency—so things moved full steam ahead. Working across more than three dozen shipyards in 17 states, civilian laborers soon fashioned an armada made of wood.

The Emergency Fleet Corporation (as that arm of the Shipping Board was known) fell several hundred ships shy of its 1,000-ship goal, but still wound up fabricating a fleet. Unfortunately, the fleet was obsolete almost as soon as it was finished. The war wound down, and few of the expensive boats had seen any action out on the water (a few did haul supplies). When World War I* officially ended, “these ships were veritable ‘white elephants’ on the hands of the government,” the Atlanta Constitution reported at the time.

In the early 1920s, a salvage company snapped many of the boats up for a few thousand bucks apiece. To access the valuable metal components, scrappers first had to get rid of the wood that was blocking their path. This often involved torching the boats until they burned down to the waterline. In 1925, the San Francisco Examiner reported that 200 “doomed ships” from several shipyards were dragged to the shore of the Potomac and destined to be set alight, 35 at a time, in “the world’s most expensive bonfire.”

The boats were never fully ravaged—not by flames, not by salvage expeditions, not by the water itself. In the shallows, the wooden hulls languished, like the sun-bleached bones of a washed-up cetacean. And, in death, they found a new kind of quiet fame.

Over the decades, they’ve become nesting grounds for osprey and red-winged blackbirds, and an appealing attraction for kayakers with a hankering for maritime history. The wrecks’ educational and ecological value factor prominently in the sanctuary nomination that then-Maryland Governor Martin O’Malley submitted to the National Oceanic and Atmospheric Administration (NOAA) in 2014. (That proposal stalled out at the time, partly because some locals who make their living on the water pushed back, citing fears about restrictions on fishing and other industries.)

It’s not quite a done deal yet. Though the designation was announced and entered into the federal register on July 8, 2019, it won’t take effect until a 45-day congressional review period expires. Barring a government shutdown, or the designation being attached to an unpopular bill, “we don’t anticipate problems,” says Susan Langley, the state underwater archaeologist with the Maryland Historical Trust, who advocated for the designation. Still, she’s “not popping any corks until November 22.”

Assuming all goes according to plan, the site will be jointly managed by NOAA, the state of Maryland, and Charles County. There are more than a dozen Marine Sanctuaries in the U.S., and regulations vary from one to another. At Mallows Bay, the designation won’t affect visitor access, says Paul Orlando, NOAA’s Chesapeake Bay regional coordinator. People will still be able to fish and kayak, and to appreciate the skeletal shapes in the wind-whipped winter, the young animals that emerge in the spring, and the riotous foliage come fall.

Advocates say that the designation is a way of boosting historical, educational, and scientific awareness about the site, and could potentially lead to numerous economic gains—an influx of students, buy-in from adventure companies, and jobs that could be a boon to the local economy.

Another big goal of the designation, Langley says, is managing the safety of both the visitors and the wrecks they trek to see. She wants to curb the chance of people “loving [the wrecks] to death,” clambering on top of the slick, fragile wood, or shoving against it with their paddles. The hope is that the Marine Sanctuary recognition will infuse the site with the “don’t break it, don’t take it” ethos, further discouraging divers or paddlers from nabbing parts of the hulls as souvenirs.

Whatever the designation will come to mean for the nearby communities, it will mean something for the dead boats too: a peaceful and protected slumber in their watery graves.

* Correction: This story was updated to reflect the correct timing of the Atlanta Constitution quote.

The Story Behind the 'Space Window' at D.C.'s National Cathedral

A century-old iron scow is inching closer to the brink of Niagara Falls.
hoaxes

The Hoax Book That Became an Anarchist and Hippie Bible

'The Papalagi'—supposedly written by a Samoan chief in 1920—offered a societal critique, but carried on a problematic racial trope.
wild west

In 1920 the "bad-man rendezvous" of Jackson, Wyoming, elected an all-female government. Will it be another hundred years till that happens again?
beer