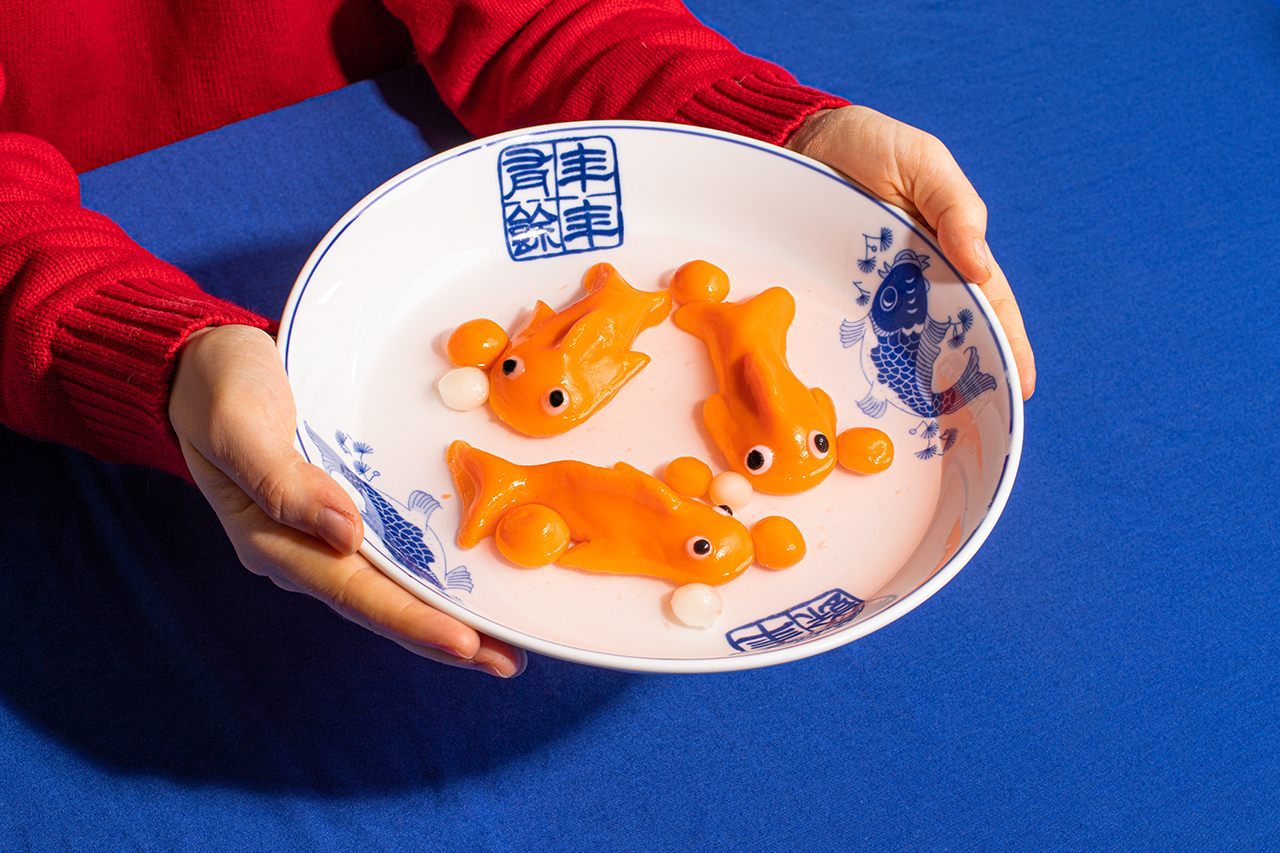 Fish and fish-shaped treats are a common sight during Lunar New Year. Jessie Yuchen for Gastro Obscura
In This Story
Destination Guide

THIS ARTICLE IS ADAPTED FROM THE JANUARY 29, 2022, EDITION OF GASTRO OBSCURA’S FAVORITE THINGS NEWSLETTER. YOU CAN SIGN UP HERE.

Editor’s note: On February 1, 2022, the sun, moon, and Earth will align, meaning both a new moon and a new year according to the traditional Chinese calendar. As the moon slowly returns to visibility over the next few weeks, families will come together to celebrate the Lunar New Year.

This time of year, you or your neighbors may hang red, Chinese-character-covered decorations, or receive a box of sweets covered in hopeful, golden words. The Chinese language holds a special power this time of year. Often, the names of every dish on the New Year table contain layers of ancient symbolism meant to ensure a happy, prosperous future.

My Cantonese mother had three iron-clad rules for Lunar New Year. First, no crying or breaking things. (This could summon bad fortune.) Second, no sweeping or cleaning. (Heaven forbid that good luck be swept away with the dust.) Third, eat your lucky foods.

There were also other obligatory foods—whole steamed fish, tangerines, dried oysters, bean curd, and cabbage. But unlike the noodles and candies, I could see no obvious reason why these dishes were considered lucky. In particular, I struggled to understand how consuming steamed cakes could win my father a promotion.

My mother, however, bristled at my questioning. “Why not just try it?” she retorted. “It can’t hurt.”

It was only after years of studying Chinese that I began to glimpse the logic behind the Lunar New Year menu. The auspicious quality of many foods came down to one thing: the sound of their names.

Take the steamed sponge cake, for example. Pronounced fā gāo (發糕), it shares a character with the word fā cái (發財), which means “to get rich.” The second character, gāo (糕), sounds like another gāo (高) which means “to rise.” Thus, steamed cakes remind people of wealth and moving up in the world.

A similar principle applies to fish, a Lunar New Year staple across China. The character for fish, yú (魚), is pronounced exactly the same way as “surplus,” yú (餘). By eating fish, you’ll ensure that the coming year will be one of plenty.

Many celebrations invariably involve loads of citrus fruits. Not coincidentally, the character for oranges (chéng zi, 橙子) is homophonous with chéng (成), signifying achievement and success.

Not everything makes for a perfect pun, though. Cabbage (bái cài, 白菜) only approximates the pronunciation of bǎi cái (百財, “many riches”). Similarly, bean curd (dòu fu, 豆腐) is a play on dōu fú (都福), or “good fortune for all.”

Some lucky-sounding food choices reflect dialect. In coastal Guangdong province, where seafood and shellfish are plentiful, people eat dried oysters during the New Year. Why? In Cantonese, the name of this delicacy sounds close to the phrase meaning “a good thing,” 好事.

So how do we explain the focus on word play during the Chinese Lunar New Year? There are several reasons.

One is that homophones abound in Chinese. This makes the language a pun lover’s paradise. Unsurprisingly, Chinese internet users exploit puns to evade government attention. For example, many end up using the word “river crab” (hé xiè, 河蟹) instead of “being harmonized” (hé xié, 和協), a euphemism for being censored.

But the popularity of lucky-sounding foods during Lunar New Year also owes much to traditional beliefs about language. As Laozi, the putative author of the Tao Te Ching, put it, “Names are fate.”

Traditional Chinese thinkers have interpreted this idea to mean that names aren’t just accidental or conventional. Words are real. They express the underlying qualities of a thing. As such, things with similar-sounding names, or homophones, are believed not only to share the same intrinsic qualities, but also possess a magical resonance connecting them together.

In practical terms, this means that you can gain control over your fate with food puns designed to attract their sound twins. Want more money in your pocket? Put that cabbage in your belly. Need more luck? Pile on the bean curd. Need a promotion? Chow down on the steamed cake.

Ultimately, it’s hard to know how seriously Chinese people today take these theories. There are probably some true believers out there, but many more see Lunar New Year wordplay as a tradition to be observed or just an excuse for mirth-making. But perhaps the real draw is psychological. Lucky-sounding foods simply get people in the right mood for the year ahead. As my mother would say, it certainly can’t hurt.

Just 10 men are permitted to hunt and pickle 2,000 young seabirds on a desolate island each year.
food

All around the world, bakers are making paska in solidarity.
farms