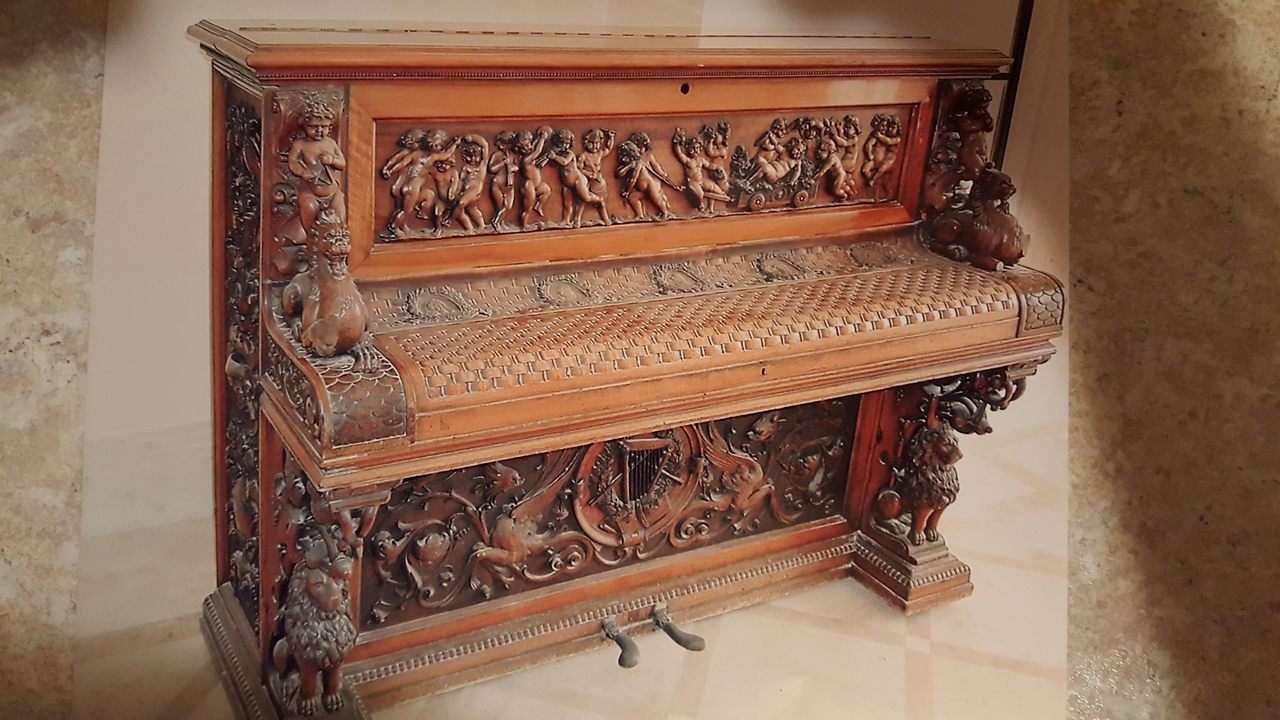 The Siena Pianoforte has seen its share of adventure. Courtesy Steve Ballance
In This Story
Destination Guide

In 1942, after driving the German forces out of El Alamein in northern Egypt, British troops went minesweeping and—surprisingly, one can only imagine—heard music come out of the ground. Buried beneath the sand was a piano, encased in plaster, and its strings had vibrated in response to the magnets of the minesweepers. For reasons no one could divine, the Nazis had lugged this instrument through the Libyan Desert all the way to El Alamein, before abandoning it upon retreat.

Whether out of curiosity, appreciation, or sheer indifference, the British opted not to destroy the instrument and lugged it themselves to Tel Aviv, where they unloaded it rather unceremoniously, without peeking inside the plaster. We can’t know for sure why they didn’t just discard it, though we can be glad: It was no ordinary piano, but the famous, ornately decorated Siena Pianoforte, also known as the Harp of David, to list just two of its acquired titles. Nearly 80 years after it was pulled out of the sand, the adventurous piano recently sold for $320,000 at Winner’s Auctions in Jerusalem.

An immaculate instrument distinguished by ornate woodwork, it had been played by some of Europe’s best-known musicians. The piano had belonged to the Italian royal family before the Nazis decided they’d rather have it for themselves. When the British found it at El Alamein—its visual splendor obscured by that protective plaster—they knew nothing of its illustrious history, or what it was worth. They certainly didn’t know that the best part of the story was yet to come.

According to a 1955 article in Time, work on the piano began around 1800, in Turin. Rumor has it that harpsichord maker Sebastian Marchisio used wood from Solomon’s Temple in Jerusalem—unlikely, perhaps, but not necessarily impossible, as the Romans may have brought pieces of the sacked temple back to Italy. It’s believed that they were used in churches, and that Marchisio salvaged the wood for his piano after an earthquake struck one of those churches.

About 25 years and two generations later, Marchisio’s grandsons, Luciano and Raffaelo, put the finishing touches on the instrument and gave it to their sister, Rebecca, who lived farther south, in Siena. There, the piano became something of a local attraction and was regularly played in public performances, favored for a unique sound, somewhere between that of a piano and a harpsichord.

The Marquis of Siena thought that a piano with such a special sound deserved a more special look, and around 1860 two artists were hired to give the exterior an upgrade. (One of them was Rebecca’s son, Nicodemo Ferri, so the work on it ultimately spanned four generations of the same family.) According to The Piano: An Encyclopedia, the finished product—still a fully functional piano—was adorned with carvings of the Ten Commandments, some 20 cherubs, and likenesses of George Frideric Handel and Wolfgang Amadeus Mozart, among several other composers. It represented Siena at the 1867 Paris World’s Fair, and was then gifted to the Italian Crown Prince Umberto. Franz Liszt played the instrument at the prince’s wedding.

As Umberto later ascended to the throne, the instrument came to be known as The King’s Piano, and was played at the palace by members of the royal family, courtiers, and renowned musicians. One musician who longed to play it was Mattis Yanowsky, a Russian-Jewish refugee whose playing had impressed Umberto. The King had told Yanowsky about the piano, but was assassinated before he invited Yanowsky to play it at court.

Haunted by the missed opportunity, an aging Yanowsky urged his grandson, Avner Carmi—himself a budding musician—to one day play the piano on his late grandfather’s behalf. Carmi tried, as far as we know, but he lacked the connections to get an invitation to the Italian court, and had bigger problems to deal with once the Nazis came to town.

In a cruel twist of fate, Carmi would have—and miss—his first chance to play the piano at El Alamein … where he was serving with the British Army. Years later, after the war had ended and Carmi had moved to Israel, he came across the plaster casing in a Tel Aviv junk shop, bought the instrument on the cheap, and wore the plaster down with 24 gallons of acetone. Only then did he realize that he had discovered—purely by accident—the elusive piano of his late grandfather’s dreams. A piano tuner by trade, he thoroughly repaired the instrument, got it back into playing shape, and invited top musicians from around the world to have a go.

It’s possible that the recorded story, in all its detail, is indeed slightly embellished—but even the confirmed broad strokes seem too good to be true. Somehow, this piano had seen three continents, survived looting and desert warfare, and then fell into the hands of an anonymous tuner who’d been chasing it all along at his grandfather’s behest. It may or may not be made of Biblical wood, but this is an instrument worthy of a thousand myths.

Why Soviet Russia Named a Tomato After an American Celebrity

Found: A Nazi 'Enigma' Machine at the Bottom of a Bay

The rust-encrusted device was likely abandoned at the end of World War II.
objects of intrigue

Their culinary legacies, written on scraps of paper or fabric, tell stories of hope and resistance.
objects of intrigue

How to Spot a 'Short Snorter'

Dwight D. Eisenhower and Marlene Dietrich both belonged to this unusual club.
Video • Wonder From Home

7:32
Want to see fewer ads? Become a Member.
From Around the Web
Atlas Obscura Trips
Ancient Wonders: Egypt & The Nile
View This Trip
Thanks for sharing!